What Are The Symptoms of Gluten Intolerance?

The Symptoms of Gluten Intolerance – What are they?

Gluten is a type of protein found in grains.  Those with celiac disease, non celiac gluten sensitivity (NCGS), or gluten intolerance need to avoid gluten to prevent the inflammation and damage it can cause.  The symptoms of gluten sensitivity/intolerance are very diverse.  For patients with celiac disease, gluten commonly causes inflammation in the small intestine.  This inflammation can lead to the symptoms of gas, bloating, diarrhea, and intestinal pain.

Want to Watch the Full GLUTENOLOGY MASTERCLASS?  Get Free Access to all 10 Modules when you register here – Glutenology.net/Registration

Gluten sensitivity manifests in hundreds of different ways. For this reason, researchers have labeled it a multi headed HYDRA of disease. Each head representing a different symptom or disease. 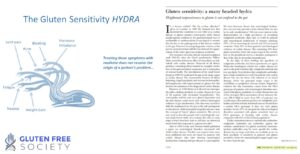 Studies show that from the first onset of symptoms, it can take the average patient almost ten years to get a formal diagnosis from their doctor.  Why does it take so long to get the diagnosis?  Simply put, both patients and doctors alike do not often recognize the vast array of symptoms that gluten can cause.  Many doctors focus on intestinal symptoms, and miss the opportunity to make the proper diagnosis.

When doctors do not have an understanding of the broad symptoms gluten can cause, medications are often times prescribed to treat these gluten induced symptoms.  This can lead to a prolonged failure to accurately diagnose celiac disease or gluten sensitivity/intolerance. Research has also linked a delayed diagnosis to a reduced quality of life in patients as well as an increased need for more medical services and intervention.

What are The Symptoms of Gluten Intolerance?

The following image may be helpful in answering this question. 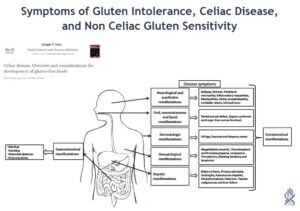 Subtle Symptoms of Gluten Exposure Are Common Before Disease is Diagnosed

Many people develop symptoms that are often not classified as disease.  These symptoms may be dismissed as minor irritations by patients and doctors alike, but they are important to recognize, because they are often times indicative of a gluten issue years before major disease develops.

If left undiagnosed, gluten exposure over long periods of time can cause or contribute to a host of different health issues. The following Is a list of symptoms, diseases, and syndromes that have been linked to gluten sensitivity.  Some of them are caused by gluten. Some of them are exacerbated by gluten.  Some of them clinically resolve or improve with a gluten free diet.1-14

How Does Gluten Cause So Many Different Types of Symptoms & Health Issues?

Simply put, gluten elicits immune responses that can lead to tissue damage and inflammation.  Traditionally, it was thought that gluten induced damage was limited to the intestines, but doctors and scientists now know that gluten can affect any tissue in the body.  Add to this that gluten induced intestinal damage leads to malabsorption and malnutrition.  Nutritional deficiencies are another reason why those with gluten sensitivity can develop a wide array of health issues.  For example, mineral deficiencies can contribute to bone loss, iron deficiency to anemia, vitamin B12 deficiency to anxiety, depression, neuropathy, and fatigue.  There are numerous connections between nutritional deficiencies and disease development.

Doctors and patients alike have often contemplated why some people experience no symptoms for years before being diagnosed with gluten related illnesses.  Research shows that gluten can be degraded into smaller proteins that mimic the pain killer, morphine.  These proteins, sometimes referred to as exorphins and gluteomorphins are thought to mask the inflammatory damage caused by gluten in some patients.  That being said, an absence of symptoms does not always mean that a person is not having a gluten reaction.  As a matter of fact, gluten sensitivity is quite common

Researchers believe that somewhere between 6 – 33% of all Americans may be gluten sensitive, and that 1 in 100 have a severe form of this sensitivity causing the the autoimmune intestinal disease, celiac sprue, a case can be made that everyone in America should be screened for gluten sensitivity.