Can Gluten Cause Vitamin E Deficiency? 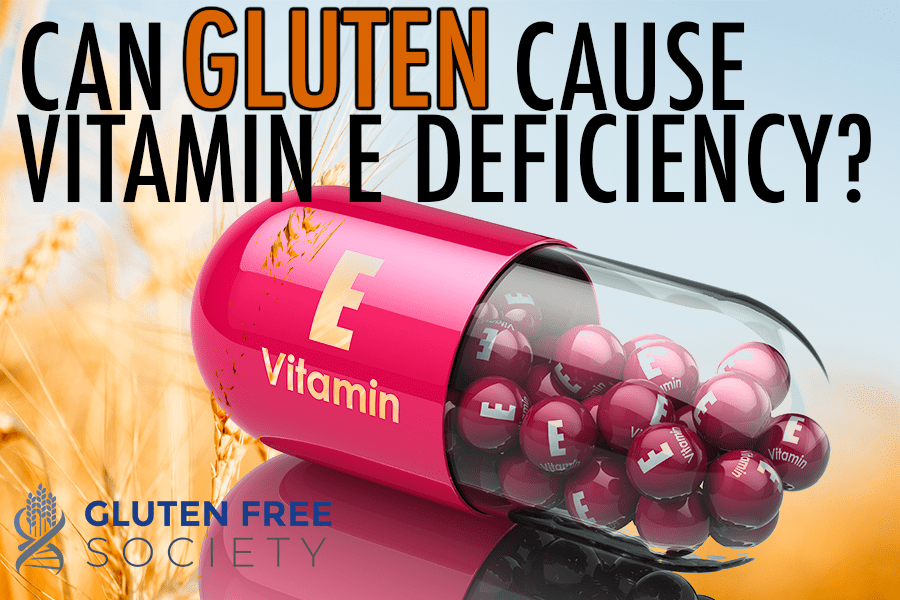 Can gluten cause vitamin E deficiency? Do those with celiac disease benefit from vitamin E supplementation? These questions and many others will be answered below, but first let’s discuss what vitamin E is, and why it is so important.

Vitamin E isn’t a single nutrient. It’s a term used to describe a group of compounds with similar properties. Vitamin E compounds are broken down into tocopherols and tocotrienols. Maybe you’ve head of alpha-tocopherol. It’s one form of vitamin E. But there are 7 more found in nature that our bodies benefit from. These are beta, gamma, and delta tocopherol as well as alpha, beta, gamma, and delta tocotrienols. For simplicity’s sake, we will refer to this family of compounds as vitamin E.

Vitamin E is made by plants and are often (but not always) found in fatty foods. This is helpful to humans because vitamin E is a fat-soluble nutrient. This means vitamin E must be eaten with fat in order for it to be absorbed. It also means that vitamin E can be stored in your fat tissue for use when needed.

The Key Roles of Vitamin E

The vitamin E is known most for its powerful antioxidant properties. Essentially, vitamin E protects your cells from free radical damage.

Research shows that alpha-tocopherols reduce the production of free radicals. And gamma-tocopherols stop existing free radicals from damaging your cells. This helps keep your cells healthy and functioning properly, which is necessary to prevent disease.

For example, vitamin E’s ability to neutralize free radicals is what protects your DNA from damage that can cause mutations and lead to the development of cancer.

In addition to its antioxidant properties, vitamin E helps prevent disease by fighting against inflammation. Vitamin E is also well-known for its ability to prevent blood clots from forming that can otherwise lead to heart disease.

Other diseases that vitamin E has been shown to help reduce the risk of include cataracts and Alzheimer’s disease. Plus, vitamin E helps boost your body’s immune response, especially when dealing with infectious diseases.

Vitamin E deficiency is something we need consider during these modern times. Because the heavily processed foods we’re consuming don’t contain sufficient amounts of vitamin E. And we’re constantly stressed out, which affects our digestion and increases our nutritional needs. Additionally, popular diet trends like the low fat diet contribute to a lack of vitamin E.

On a similar note, vitamin E deficiency can be caused by diseases that impact our digestion of fat. For proper absorption of vitamin E, the liver, gallbladder, pancreas, and small intestine are essential to produce bile and enzymes which aid in this process. So it is important to understand that those with liver damage, gall bladder disease (including those who have had their gallbladder removed), pancreatic insufficiency, and inflammatory bowel diseases are at highest risk for developing a vitamin E deficiency. This includes gluten induced celiac disease. The diagram below illustrates a list of diseases that not only contribute to vitamin E deficiency, but these diseases may also require supplemental doses of vitamin E. 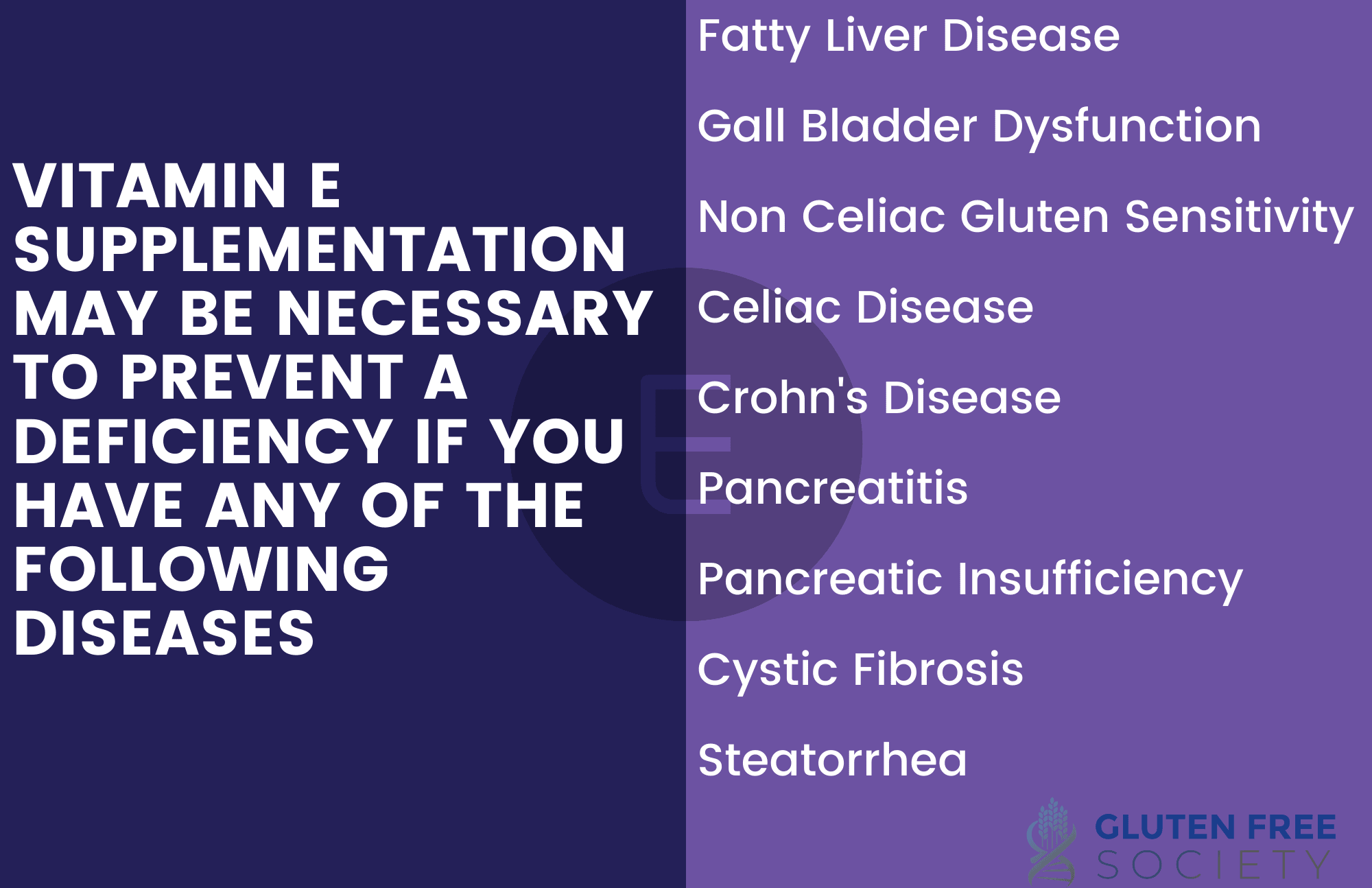 Medical Treatment That Can Cause Vitamin E Deficiency

It is also important to understand that some medical interventions, surgeries, and treatments can cause or contribute to an increased risk for vitamin E deficiency. These include:

Because vitamin E is a powerful antioxidant, low levels can lead to chronic inflammation and free radical damage. Inflammation can cause a wide array of different symptoms, so sometimes pinpointing their relationship to low vitamin E can be difficult. That being said, some of the more common symptoms associated with vitamin E deficiencies include:

If left untreated, a vitamin E deficiency can lead to abnormalities and may contribute to more serious diseases. These include:

Can Gluten Cause Vitamin E Deficiency?

In addition to our Western diet that lacks vitamin E, the potential for problems increases when gluten sensitivity is added to the mix. Because in these cases, gluten irritates and inflames the GI tract, liver, and gallbladder, all of which are responsible for aiding digestion and absorption. Thus, food and the nutrients they contain (including vitamin E) are not properly digested or absorbed.

Diarrhea is a common symptom associated with gluten sensitivity. Chronic diarrhea may flush nutrients from your body before they have the chance to be absorbed.

Steatorrhea, a condition in which excessive fat is present in the stool due to malabsorption is also a common problem caused by celiac disease linked to low levels of vitamin E.

In this case report, doctors studied a woman with both celiac disease and cerebellar syndrome. Cerebellar syndrome occurs when your cerebellum in your brain is damaged or inflamed. It generally affects your gait and muscle coordination.

Similarly, in this case study, a patient diagnosed with celiac disease was also having neurological problems, including muscle weakness, nerve damage, and cerebellar symptoms. Doctors found inflammation in her muscle tissue and a severe vitamin E deficiency. When treated with a gluten-free diet and vitamin E supplementation, her condition significantly improved, including a reduction in muscular inflammation.

It’s also worth noting that in order for vitamin E to work effectively and efficiently, it requires the presence of other nutrients, such as vitamin C, vitamin B3, and selenium. Thus, gluten sensitivity may hinder the activity of vitamin E since it can also cause deficiencies in these supporting nutrients.

Gluten can cause an array of symptoms that can overlap with the symptoms of vitamin E deficiency. It is important to understand the cross over, because if you have gone gluten free but still struggle with these symptoms, you may have a vitamin E deficiency issue that needs to be addressed. These overlapping symptoms can include muscle pain and weakness, cerebellar ataxia, neuropathy, and anemia.

Vitamin E supplementation may be needed, especially if you’ve been recently diagnosed with gluten sensitivity or celiac disease. And it’s important to choose one that contains a mix of tocopherols and not just alpha-tocopherol. Because as I mentioned above, they all work together to protect your cells and promote health.

When it comes to food sources of vitamin E, they naturally contain multiple forms of the nutrient. So I also recommend including the following gluten and grain free, vitamin E-rich foods in your diet. 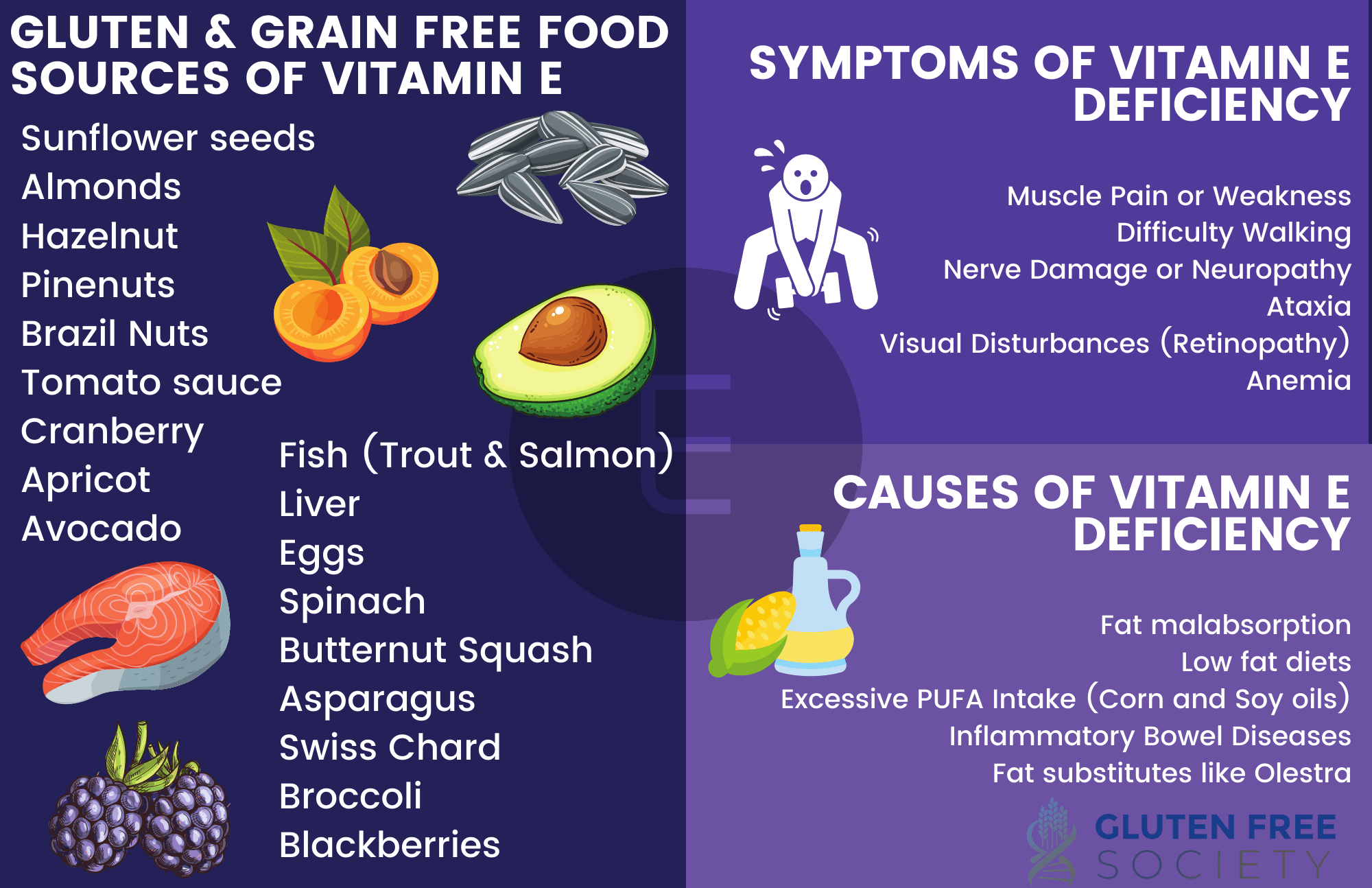 The fruits and vegetables listed above should always be eaten with a source of healthy fat to boost the absorption of vitamin E. For example, roast your asparagus or broccoli with avocado oil. Sprinkle some coconut flakes on top of your kiwi.

Now, it is true that “vegetable” oils (e.g., sunflower and safflower) contain vitamin E. But these oils are heavily processed. They’re exposed to heat, pressure, and oxygen during the process, which damages the fat. When consumed, these damaged fats can harm your cells. Plus, these oils are high in omega-6 fatty acids, which promote inflammation when consumed in excess. So even though vegetable oils do contain vitamin E, I never recommend them.

Now if you’re ready to add more vitamin E to your diet, below are a few of my favorite recipes with vitamin E-rich foods (and healthy fats) to get you started:

One thought on “Can Gluten Cause Vitamin E Deficiency?”