Can Gluten Cause Bone Loss?

Can Gluten Cause Bone Loss? 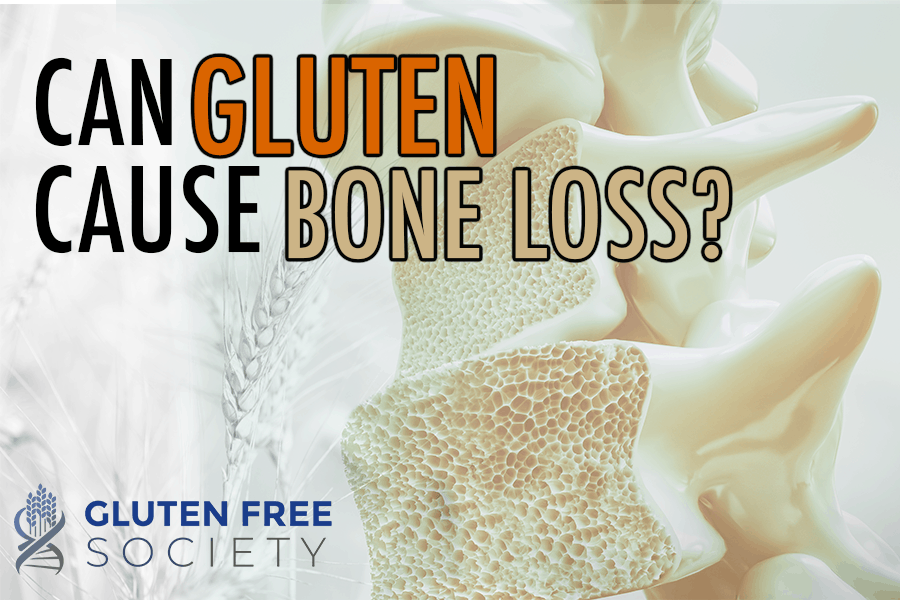 Prefer to learn by video? Watch the breakdown here.

Your bones are made up of mostly collagen and minerals, such as calcium. And the more you use them, the stronger they get. This is one of the many reasons why weight-bearing exercises are so important and become even more essential as we age.

Your bones are constantly being worn down and built back up. More specifically, cells known as osteoclasts break down bone tissue by releasing minerals from your bones into your bloodstream. This process is known as bone resorption. And cells known as osteoblasts rebuild your bones, which makes them stronger. For an in depth crash course on bone health and physiology, you can watch this video.

The disease osteoporosis occurs when your bones degrade quicker than new bone is formed. Essentially, your bones become less dense due to a loss of minerals. As a result, your bones are more fragile and likely to break.

However, when this happens, cells known as osteoblasts start forming new bone tissue. And each time this happens, the bone gets stronger. This is why weight-bearing exercises are so important and become even more essential as we age.

The disease osteoporosis occurs when your bones degrade quicker than new bone is formed. Essentially, your bones become less dense due to a loss of minerals. As a result, your bones are more fragile and likely to break.

Bone fractures associated with osteoporosis are common, especially among older adults. In fact, it’s estimated that 50% of postmenopausal women will break a bone due to osteoporosis. And only 33% of those injured are able to return to a normal, independent life.

Aging is a commonly cited risk factor of osteoporosis. Other risk factors include:

Osteoporosis can also be caused by other abnormalities and diseases. For example, any condition that limits your mobility can lead to osteoporosis. Other associated conditions include:

However, in this article, I’m going to discuss the ways in which gluten can contribute to bone loss. Because you’re not likely to learn much about it elsewhere. Plus, prevention is the best medicine when it comes to osteoporosis. In fact, you may not know you have osteoporosis until you break a bone.

Can gluten cause bone loss? Here is what we know about celiac and osteoporosis. Celiac disease (CD) contributes to the development of osteoporosis both directly and indirectly. Science even suggests that in some cases of CD, bone loss may be the only symptom.

Studies show that osteoporosis is more severe in those with CD and the severity of CD leads to more severe cases of bone loss. There are also studies that show CD increases your risk for bone fractures.

In addition, a gluten-free diet has been shown to significantly increase bone mass density in those with both CD and bone loss.

In this study, recently diagnosed CD patients with reduced bone mineral density (BMD) were put on a calcium-rich, gluten-free diet for one year. After treatment, the researchers found that BMD increased throughout the body, including the spine, neck, and hips, in most patients. They also reported that increases were most significant among women and younger patients.

Another study reported similar results, although gender and age didn’t come into play. However, what’s interesting about this study is that although only 57% of patients experienced improvements in the lining of their gut on a gluten-free diet after one year, those with low BMD still experienced a significant increase in BMD. Which provides more evidence that the effects of gluten go well beyond your gut.

Finally, this study found that 25% of participants with untreated celiac disease experienced at least one bone fracture compared to 8% among the general population. However, the fracture rate dropped to 7% for those with celiac disease when treated with a gluten-free diet.

It is well-known that gluten causes gut damage and dysfunction, which causes malabsorption of important nutrients necessary for bone growth. Diarrhea, a common symptom of celiac disease, may also further lead to nutrient deficiencies.

When you think of nutrients important for healthy bones, calcium and vitamin D likely come to mind. Rightfully so. But there are many other nutrients involved in building bones that one with gluten sensitivity may be lacking. These include magnesium, potassium, vitamin B12, iron, vitamin C, zinc, selenium, boron, and vitamin K among others.

Estrogen is a female sex hormone that regulates reproduction. But it also plays a significant role in bone health, such that a deficiency can hinder both bone resorption and formation.

Women with CD also tend to start their periods later than average, miss periods, and experience menopause earlier, which are all risk factors for osteoporosis.

There’s a field of study known as osteoimmunology, which examines the relationship between your immune system and your bones. Because there’s evidence that they influence each other.

Celiac disease is an autoimmune condition. Essentially, your body deems gluten a threat. And when you eat it, your immune system shifts into high gear. It attacks the lining of your gut and causes local as well as systemic inflammation.

Celiac disease is also closely associated with many other autoimmune diseases. And antibodies against osteoprotegerin (a compound secreted by osteoblasts to prevent extreme bone resorption) have been found in patients with celiac disease. This suggests that osteoporosis in some cases may be an autoimmune condition where the immune system attacks osteoprotegerin, which causes accelerated bone loss.

I briefly mentioned medications above as potential contributors to bone loss. And it’s relevant to our discussion because most people with gluten sensitivity and celiac disease are prescribed nutrient depleting medications to treat their symptoms.

There’s also some evidence that steroids may reduce your magnesium levels. And magnesium is used by osteoclasts and osteoblasts to build strong bones. Plus, a magnesium deficiency is associated with inflammation, which can ultimately affect the health of your bones.

Antacids are frequently prescribed for heartburn, which reduces the production of stomach acid. However, stomach acid is necessary to help release minerals like calcium, magnesium, and iron from your food so they can be absorbed and utilized in your body.

Other frequently prescribed medications prescribed for diabetics and heart disease are also risky when it comes to bone-building nutrients. For example, blood sugar lowering medications may deplete your body of vitamin B12 and CoQ10. Blood pressure-lowering medications may lead to similar deficiencies as well as magnesium, potassium, and calcium. Plus, aspirin used to help thin the blood is linked to reductions in vitamin C, vitamin K, and folic acid. 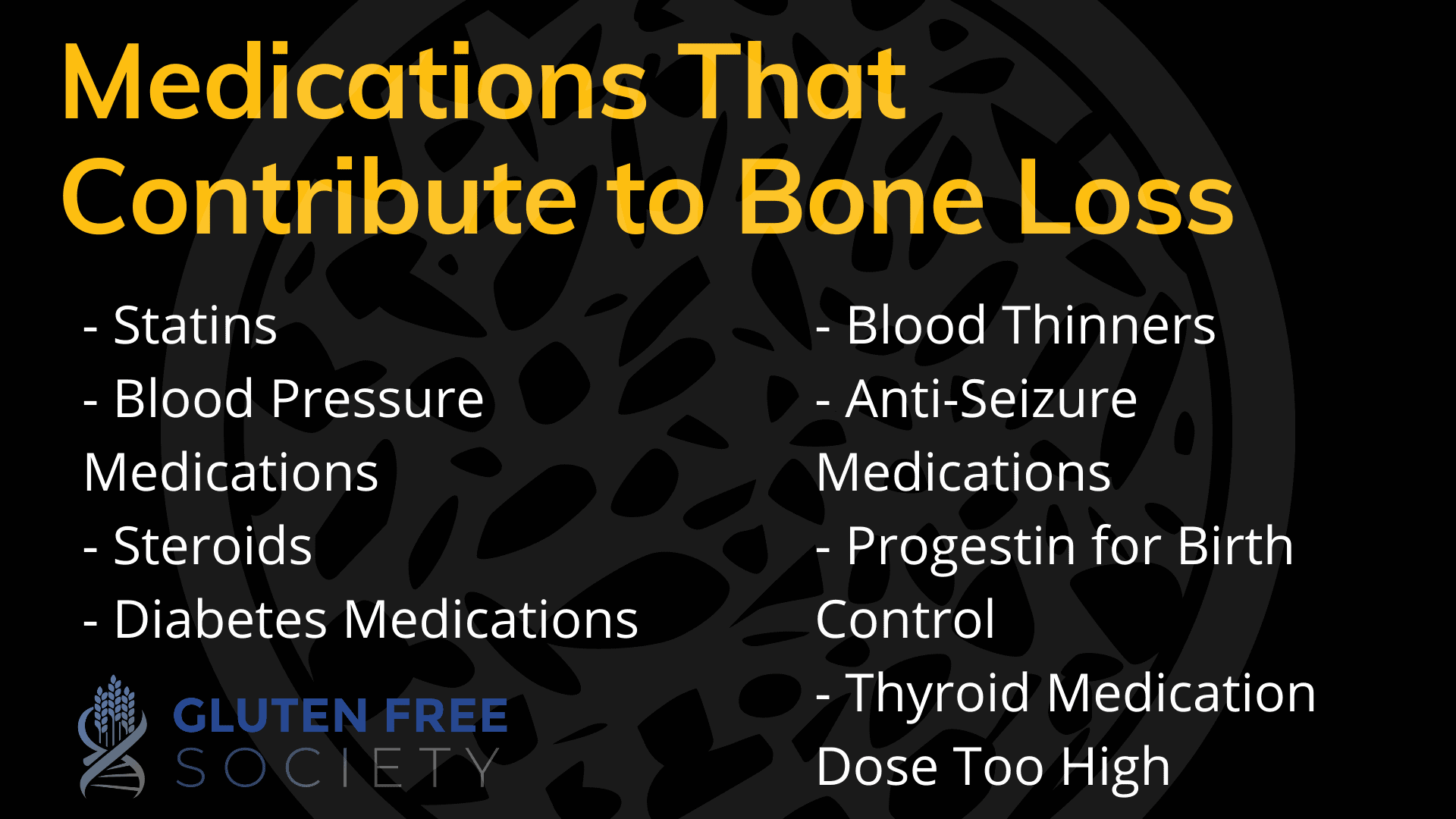 One last point I want to make is that a diet rich in gluten and grains is also usually high in starch and sugar. And when these two foods are eaten in excess, it can lead to weight gain, obesity, diabetes, and more. This is problematic because obesity may make it harder to exercise to build stronger bones. Plus, the medications I just mentioned above may be prescribed.

To Sum it Up

Can gluten cause bone loss? The simple answer is yes. If you’re diagnosed with osteoporosis, it’s imperative that you screen for celiac disease and gluten sensitivity. Because there is a link. And when found in combination, high dose vitamin D and calcium won’t solve the problem.

On the other hand, if you have celiac disease or gluten sensitivity, it’s important that you monitor your bone health. Because gluten may secretly be contributing to bone loss.

In either case, you’ll want to start a gluten-free, grain-free diet as soon as possible to help protect and rebuild your bones.