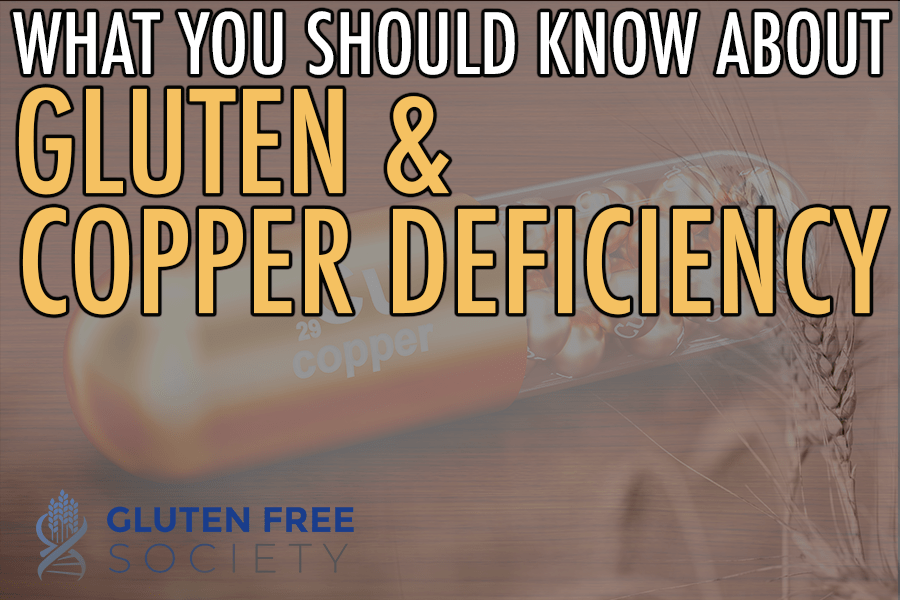 When you think of copper, you may think of pennies or plumbing pipes. But copper is also an essential nutrient that plays many important roles in your body. Because those with gluten sensitivity and celiac disease can suffer with nutritional malabsorption, it is important to understand that the functions of copper. Copper deficiency symptoms can mimic many of the symptoms caused by gluten. So keep reading, because if you have gone gluten free, but continue to experience health issues, copper deficiency may be part of your problem. 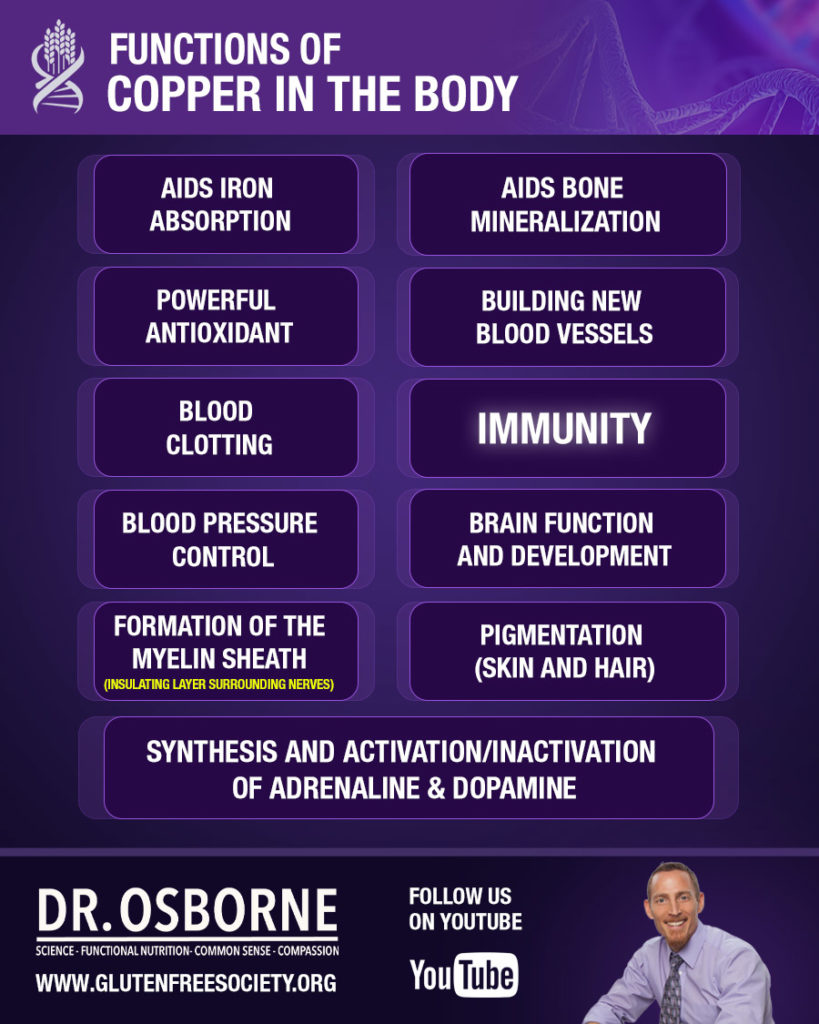 Copper acts as a co-factor for many enzymes in your body. So without copper, these enzymes can’t do their job. And many vital reactions wouldn’t occur. For example…

Copper is needed to absorb iron and release iron from storage when it’s needed. It also helps iron bond to red blood cells to prevent anemia. And iron-bound red blood cells then carry oxygen throughout your body, which is necessary to make energy.

Copper is also a co-factor for energy-producing enzymes, which is another way in which copper is involved in producing energy. This explains why most of the copper in your body is found in tissues that have high energy demands, such as skeletal muscle and heart tissue.

Copper is needed to build collagen, the most abundant protein in your body. It’s a structural component of your skin, bone, blood vessels, and more.

Your body produces an enzyme known as superoxide dismutase (SOD). It’s a powerful antioxidant that protects your cells from damage. And copper is a co-factor of SOD, which means SOD needs copper to successfully do its job.

Other vital functions that involve copper include: 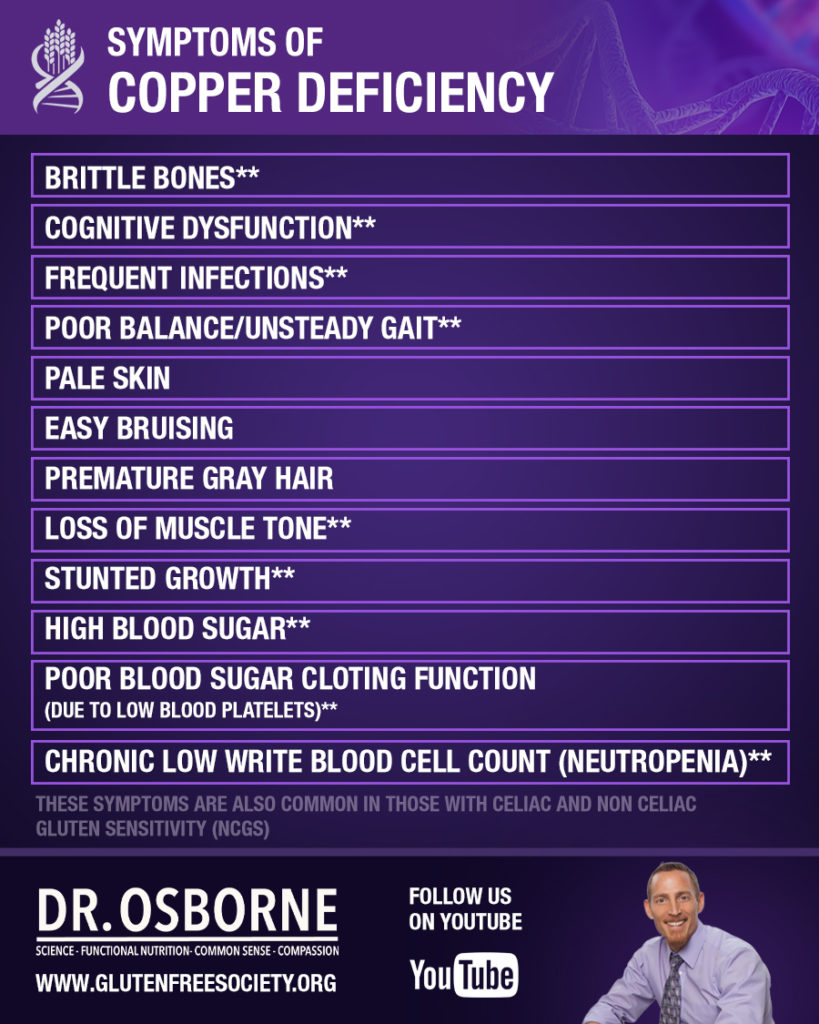 Copper is a trace mineral, which means it’s only needed in small amounts. Yet, deficiencies do occur. And most symptoms of deficiency are closely related to the roles copper plays.

For example, since copper helps your body absorb iron, a copper deficiency could lead to anemia. As a result, you may feel tired and weak. Fatigue may also arise because copper is needed to make ATP (a.k.a. cellular energy).

Other possible symptoms include:

Copper deficiency isn’t always considered when it comes to the above symptoms. But it should be. Because if left untreated, a copper deficiency can cause serious problems. In addition to anemia, other associated conditions include: 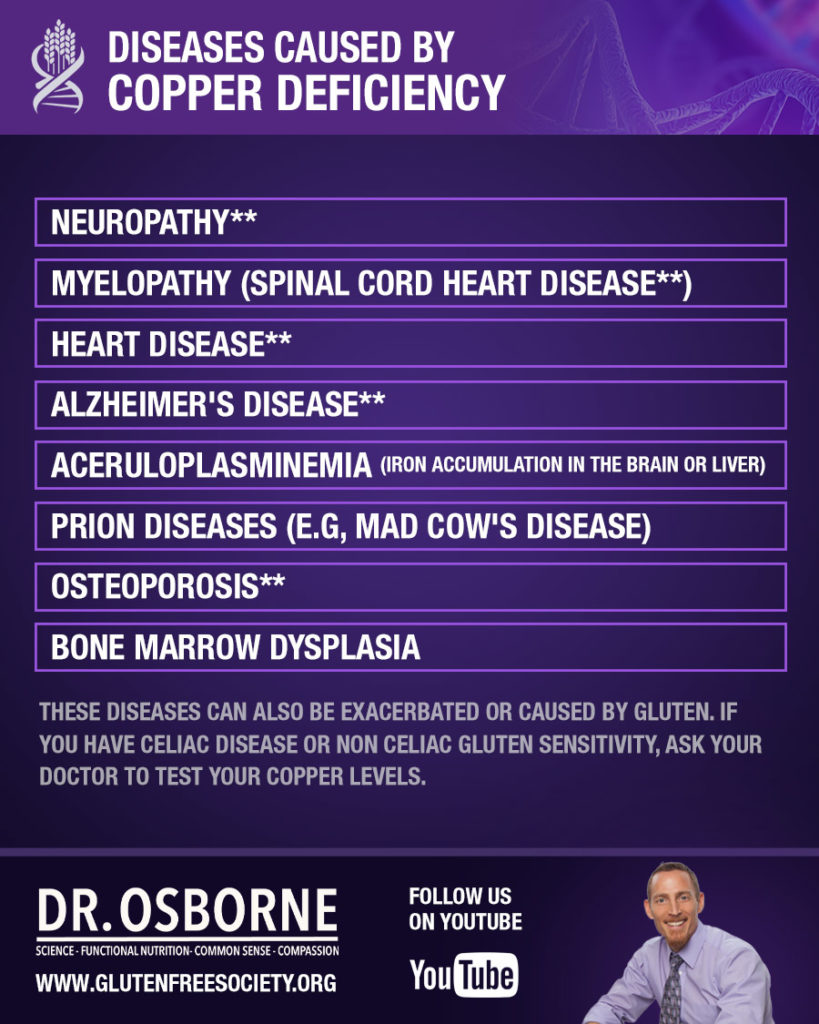 How Gluten Contributes to Copper Deficiencies

However, gluten causes digestive dysfunction and malabsorption for those with gluten sensitivity. So very little, if any, copper gets absorbed.

In this case report, a woman was being evaluated for a 5-year history of an unsteady gait as well as weight loss. Testing revealed she had brain (ataxia) and spinal cord damage (myelopathy). She also had low serum copper levels along with high anti-gluten antibodies and autoimmune antibodies. So her small intestine was biopsied and the results were consistent with celiac disease.

It’s important to note that this woman had no gastrointestinal symptoms. So she’s lucky her doctors screened her for celiac disease. Otherwise, she may still be suffering.

A similar case was reported with a 60-year-old man. He had no digestive distress. But there was evidence of spinal cord damage that caused poor balance, numbness in his feet, and weakness in his lower legs.

Copper was undetectable in his blood. His blood tests also revealed the presence of autoimmune antibodies. His small intestine was biopsied and celiac disease was confirmed. With a gluten-free diet and supplemental copper, his symptoms drastically improved. And there are several other case reports just like this within the scientific literature.

In this case study, severe copper deficiency was diagnosed in two infants (about 7 months old) with celiac disease. In addition to obvious signs of malnutrition, they had low white blood cell counts (neutropenia) and brittle bones. Again, a gluten-free diet along with copper supplementation led to a swift recovery.

Finally, it’s worth noting that gluten doesn’t just cause malabsorption. In many cases, it also causes diarrhea, which further decreases your body’s ability to absorb nutrients. Plus, gluten-rich diets are filled with processed foods that lack copper.

Some excellent sources of dietary copper that are both gluten and grain free include: 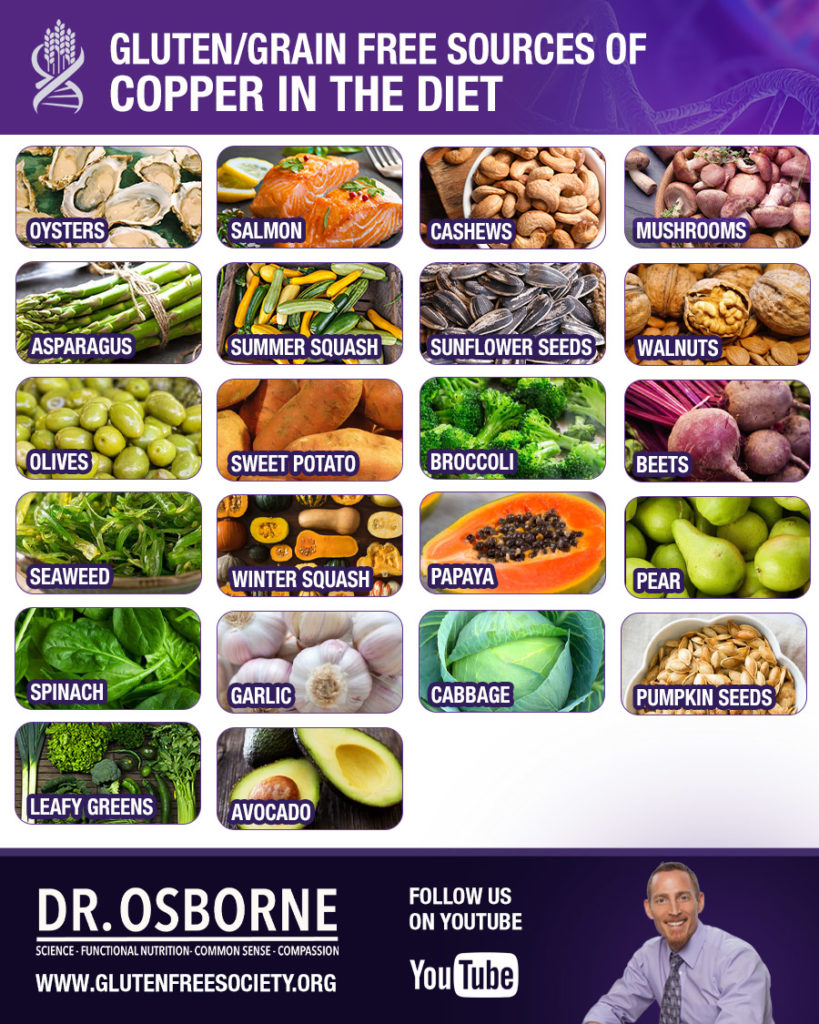 You’ll also find copper in some seafood, such as shrimp and sardines.

It’s almost impossible to overdo your copper intake with food. However, you must be careful supplementing with copper. Because too much can cause harm. So I always recommend working with a certified nutrition professional when it comes to supplementing.

Serum Copper – Can be very misleading for copper adequacy in the diet, typically a reflection of your last meal and not of long term storage.

And finally, if you are sensitive to gluten, supplementing with copper or eating more copper rich foods alone may not be enough. Supplementation may be necessary to support your healing process, but a strict gluten-free diet is most important. It’s what will allow your body to heal. So you can start absorbing and benefiting from copper once again.

Our Copper Supplement can be purchased here – Ultra Copper

Want to dive deeper into this article? Watch the replay of Dr. Osbornes live discussion in the video below.