The Best Diet to Heal Your Liver

Can Gluten Cause Liver Damage?

What is the best diet to heal your liver? Do you think of the liver as an organ that aids digestion? Many do not, and so you might not think there is a logical connection between liver health and digestive health. Your diet can play a huge role in the healing process.

However, all of the blood leaving the stomach and intestines first passes through the liver. The liver filters this blood coming from the digestive tract before passing it to the rest of the body. The liver also detoxifies chemicals and metabolizes drugs and secretes bile that ends up back in the intestines.

You can see how liver health and digestive health are interrelated, and so I want to discuss how gluten and celiac disease may influence liver health.

Liver disease is a broad term for a number of diseases related to compromised liver health. It may include any of the following: 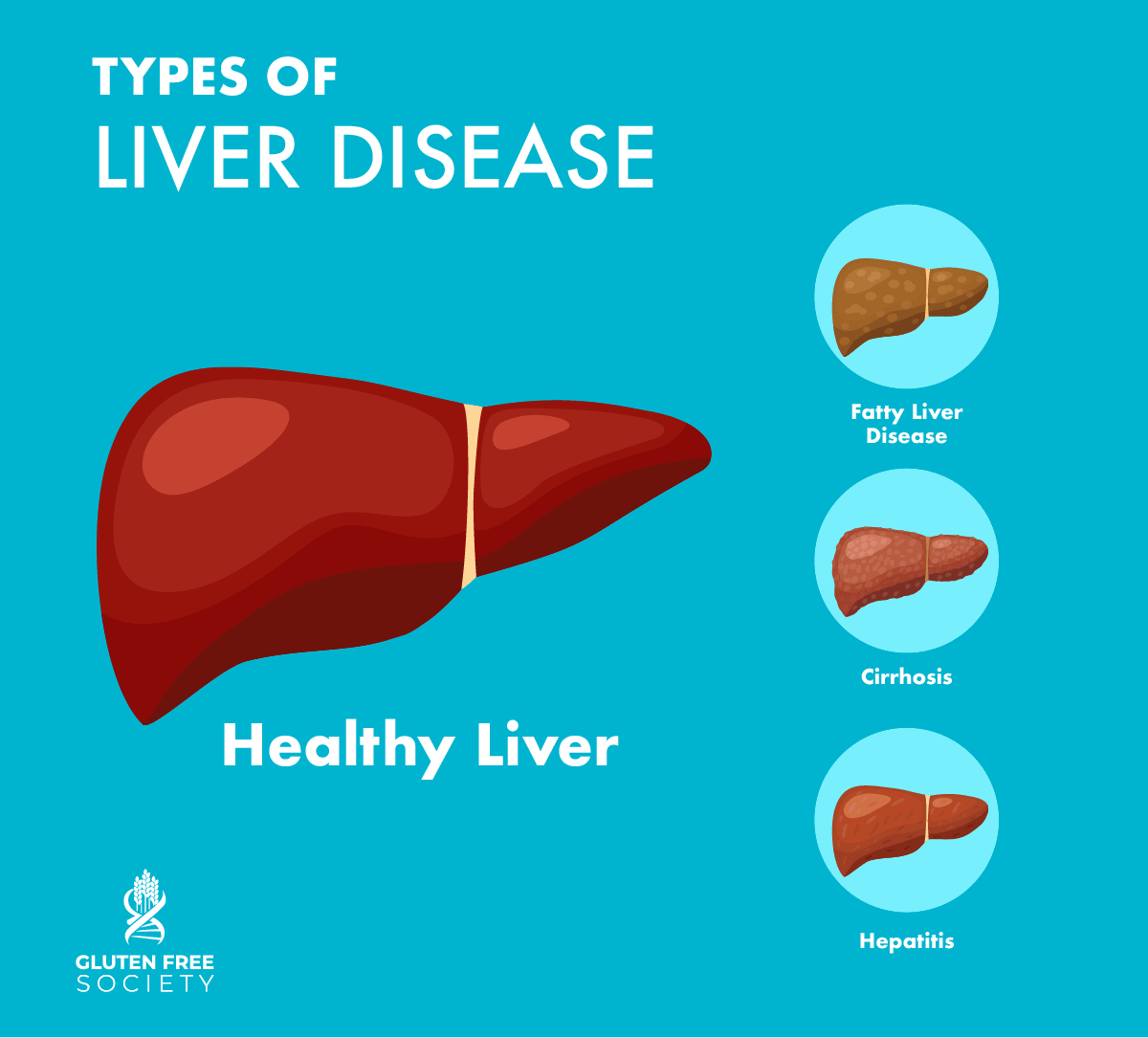 Potential Mechanisms to Explain the Link Between NAFL and Celiac Disease

There are a number of potential mechanisms being studied in an attempt to explain the link between celiac disease and liver disease.

Some researchers believe that cellular stress induced in celiac patients may trigger the onset of NAFL. Other studies point to intestinal permeability which is increased in both celiac disease and NAFL. 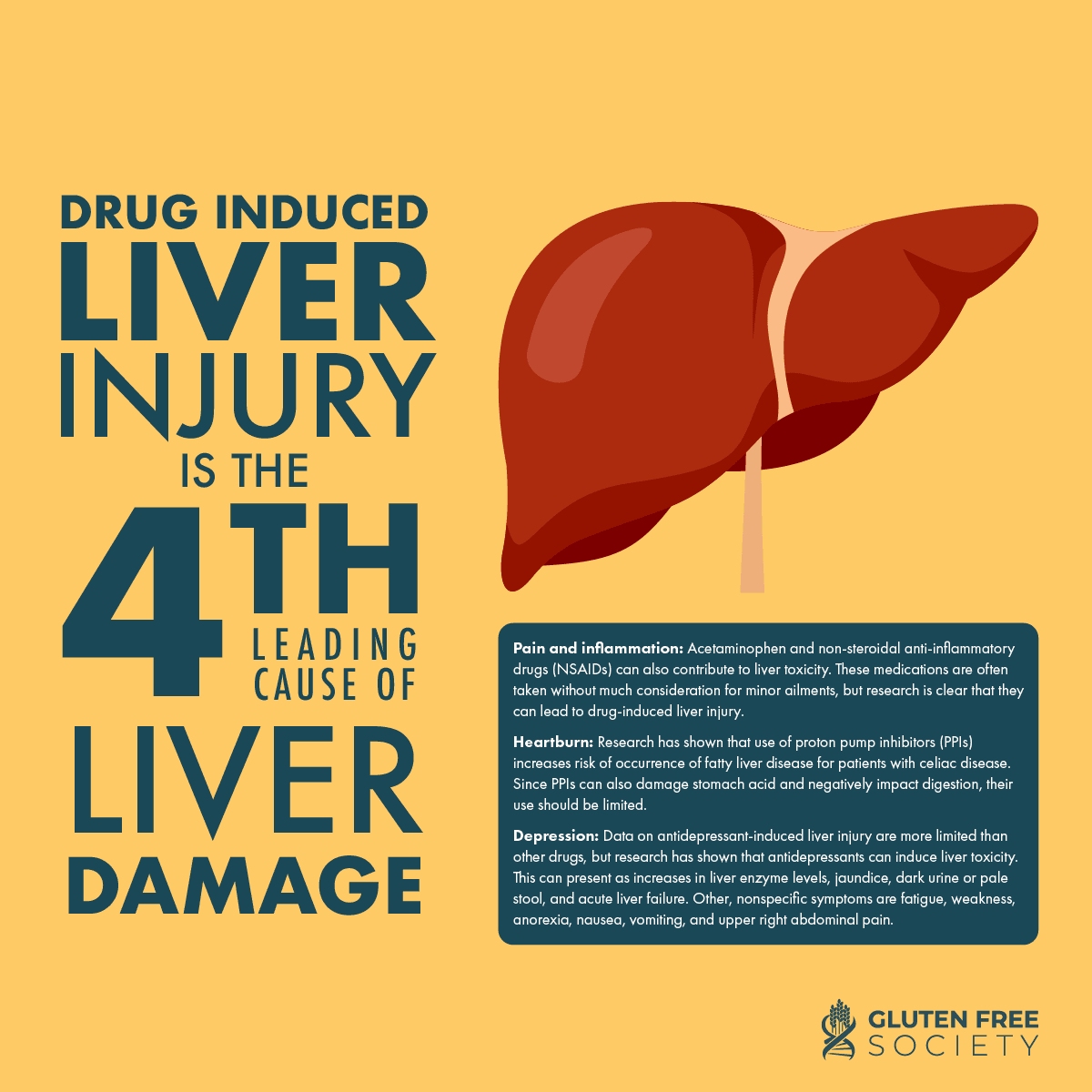 How Traditional Gluten Free Diets May Increase the Risk of NAFL

Again, NAFL is still not fully understood, with researchers still studying all of its possible mechanisms and causes. However, one undeniable contributor to NAFL is the excessive consumption of refined sugar and carbohydrates. Diets high in processed food and inflammatory oils and lacking in fiber, healthy fats, and protein put stress on the liver and contribute to obesity. Highly processed diets also tend to lack the important micronutrients needed to process energy through the liver, like B vitamins and choline.

Unfortunately, this type of highly processed diet is quite easy for many to achieve while adhering to a gluten-free diet. Yes, the increase in awareness in recent years around the gluten-free diet has had positive effects on availability of certain gluten-free products and more transparent labeling. However, it has also resulted in the increase in availability of processed gluten-free junk food. Particularly for those newly diagnosed, or who previously relied on packaged and processed foods, the refined grains and sugars found in many gluten-free foods can contribute to the inflammation, insulin resistance, and metabolic syndrome that often underlie NAFL.

In fact, one study followed newly diagnosed celiac disease patients who had just started a gluten free diet over the course of both one year and four years and found that Patients with celiac disease are at high risk of developing metabolic syndrome and fatty liver, which increases further with a gluten-free diet. The researchers recommended that patients be assessed for nutritional and metabolic features and counseled about a balanced diet and physical activity to mitigate this risk.

Another meta analysis of a number of studies exploring this link underscored a gluten-free diet as a possible contributor. It found that at the time of diagnosis, the frequency of NAFL and nonalcoholic steatohepatitis in individuals with celiac disease appeared to be similar to that of the general population. This suggests that the development of fatty liver seems to happen after diagnosis, with one major change in the lifestyles of those diagnosed being their diet. This isn’t to suggest that a person diagnosed with celiac disease shouldn’t follow a gluten-free diet, rather to suggest that celiac disease patients should pay careful attention to follow a gluten-free diet that focuses on healthy, whole, unprocessed foods. 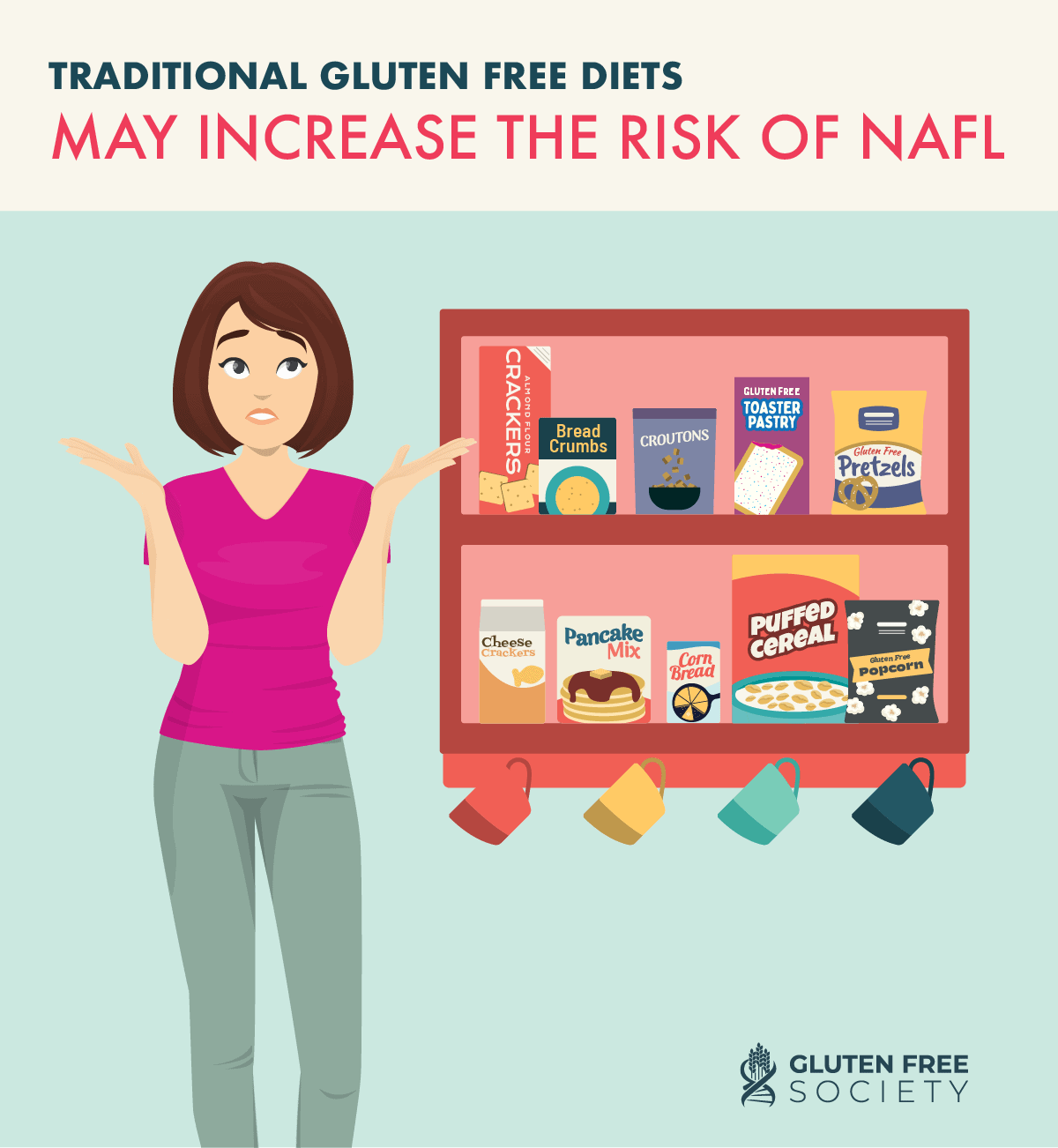 We know that celiac disease is often found in association with other autoimmune diseases, and this applies to autoimmune hepatitis as well. One study investigated this relationship by assessing the prevalence of IgA and IgG anti-tissue transglutaminase (tTG) antibodies in autoimmune hepatitis, and by verifying whether the ﬁndings were associated with clinical and

A growing body of research and a number of case studies have demonstrated that in cases of joint autoimmune hepatitis and celiac disease, a gluten free diet can not only resolve the illness, it can also negate the need for the medications being used to treat it.

For example, one case study followed a 50-year-old male with long-standing autoimmune hepatitis. He had been on the immunosuppressive medication azathioprine for 10 years, and even after adding high-dose corticosteroids, his key lab levels remained high and disease unmanaged. Celiac disease was diagnosed through an antibody test and endoscopic biopsy. Once a strict gluten-free diet was advised and implemented, his autoimmune hepatitis went into remission alongside the use of his prior medications. In this case, a gluten-free diet was able to help reverse liver dysfunction. It also provides important information to other patients and practitioners that screening for gluten sensitivity and celiac disease can be crucial in patients with autoimmune hepatitis and persistent elevation of liver enzymes despite immunosuppressant treatment. 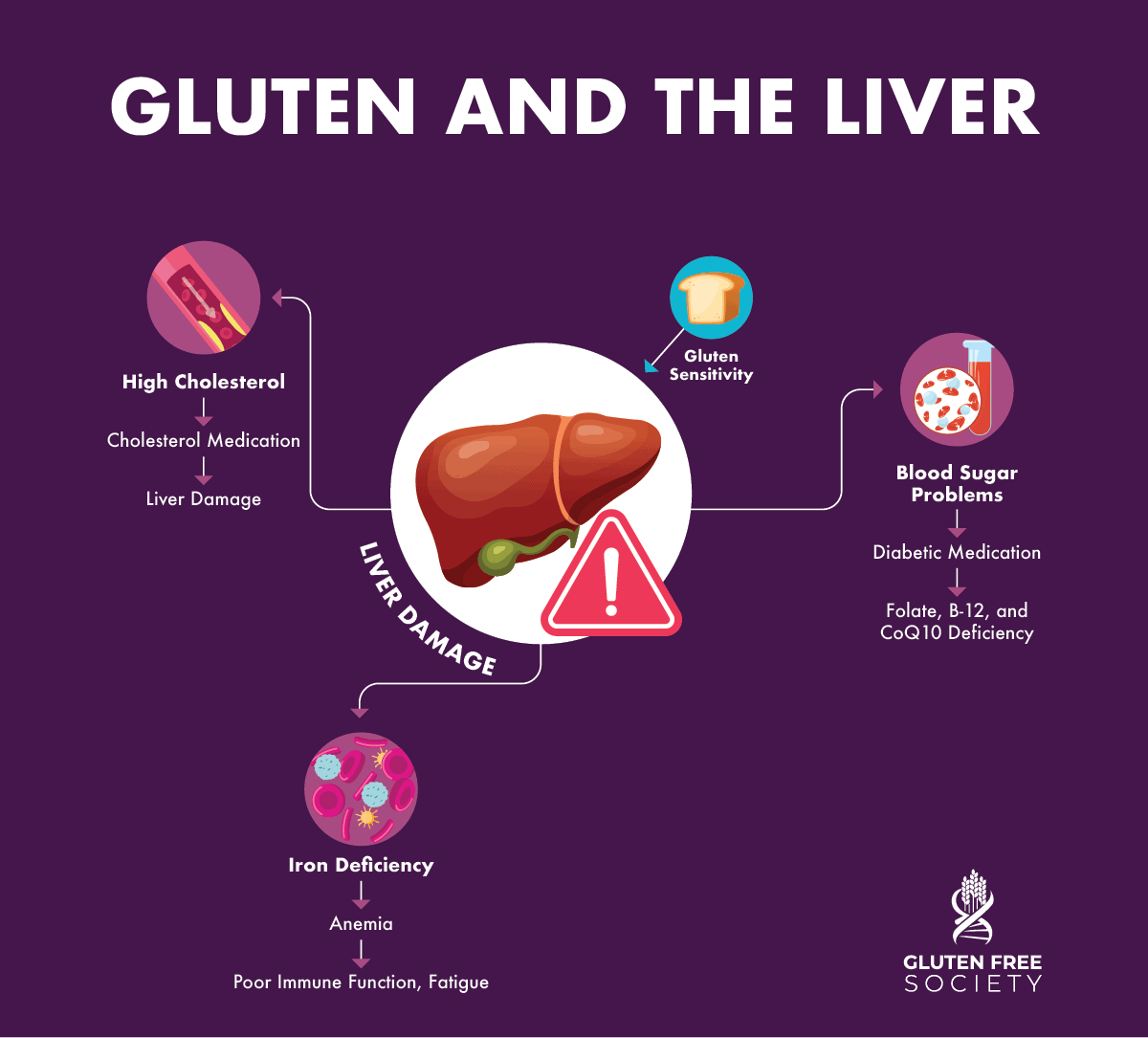 When celiac disease or non-celiac gluten sensitivity goes undiagnosed or is experienced without symptoms (known as silent celiac disease), patients are often left trying to manage symptoms. This can lead to the use of over-the-counter or prescription drugs for symptoms such as pain and inflammation, heartburn, and depression.

Unfortunately, many of these medications can be hard on the liver leading to increased liver stress and risk of disease. At the same time, they aren’t even getting to the root of the issue – an intolerance to gluten.

Incredibly, drug-induced liver injury (DILI) is the fourth leading cause of liver damage in Western countries and is the most frequent cause of market withdrawal of a drug and rejection of applications for a marketing license in the United States.

While we know that there is a clear link between celiac disease and liver disease, we are still learning why this link exists and what mechanisms drive it. The more we understand about the causes that underlie both diseases, the more we can proactively manage our health.

What we do know is that those diagnosed with celiac should be mindful in choosing whole unprocessed foods that support liver health, and should be regularly screened for markers of liver health. Thoughtful dietary choices will go a long way in supporting not only liver and gut health, but overall health and longevity as well.

6 thoughts on “The Best Diet to Heal Your Liver”