What Is A Histamine Intolerance and How Does it Relate to Gluten?

This article is going to focus on explaining:

To understand what histamine intolerance is, let’s first discuss what histamine is. Many people have heard of antihistamines.  This class of medicines are available over the counter, and are commonly used to treat the symptoms of outdoor allergies.  They work by blocking histamines.

Derived from the amino acid, histidine, histamine is a bioactive amine  that helps with several key cellular functions. Histamines can be made by your body (endogenous), but they are also naturally present in many foods (exogenous).    As a chemical in the body, histamine  has several key functions. It aids in communicating messages to your brain, triggers the release of stomach acid to help digestion, and assists the immune response after injury or allergic reaction. It is primarily stored in mast cells, which are specialized immune cells found in connective tissues throughout the body.

The body can break down histamines using a specialized enzyme called diamine oxidase (DAO).  However many factors can influence this process, and when histamine levels rise too high, they can trigger numerous symptoms and health issues.

What are the symptoms of histamine intolerance? 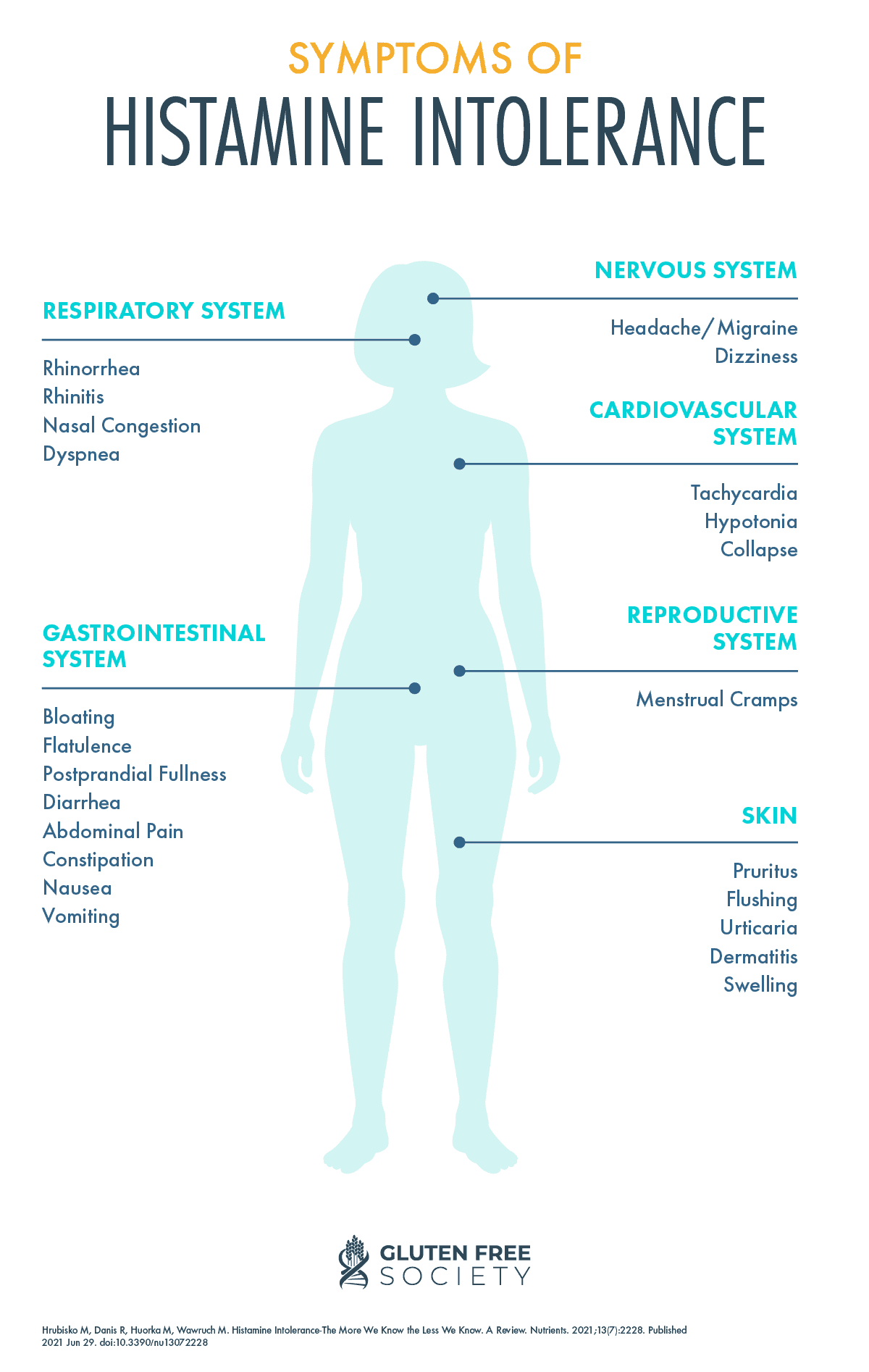 Histamine intolerance can be hard to diagnose. The symptoms involved vary widely and can overlap with symptoms of other conditions.

Histamine can affect a number of organ systems which can then manifest through a number of symptoms.  Below is a breakdown of the most common symptoms. 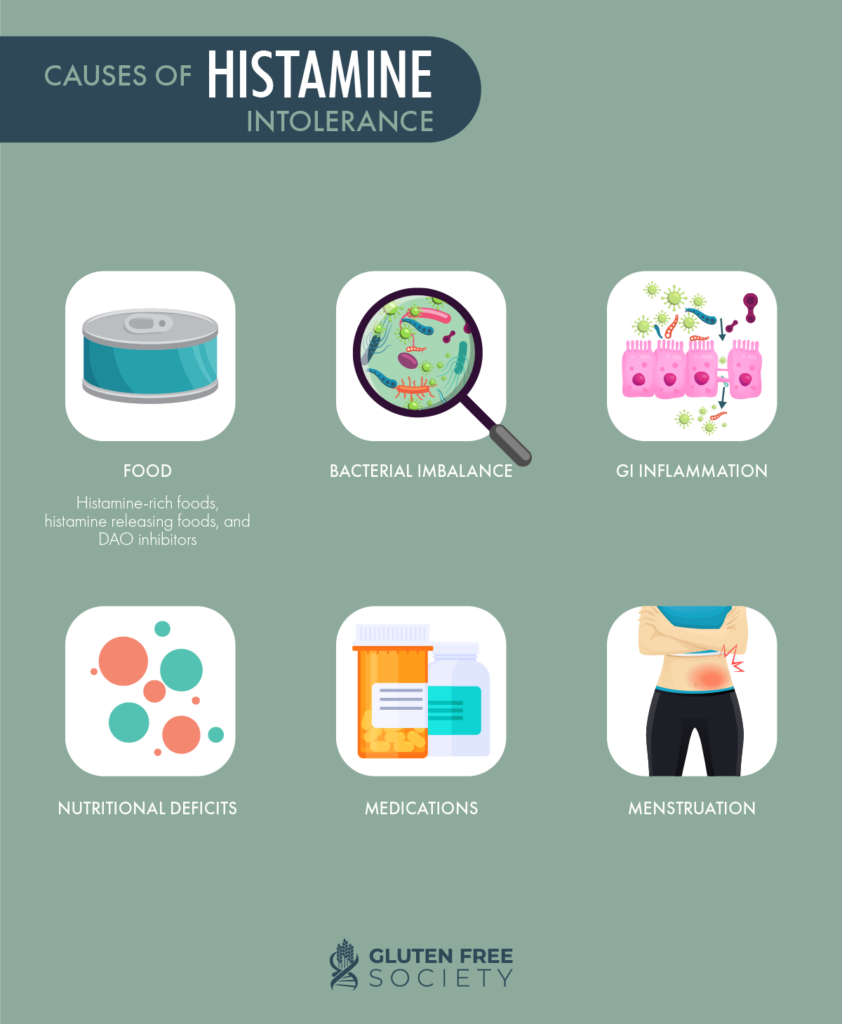 Some histamine is essential for normal body functions, but too much can cause problems. Therefore, the body must balance the production and intake of histamine with the elimination of histamine. If this process is hindered,  histamine builds up, and symptoms of  histamine intolerance occur.

In the human body, the primary pathway for the natural degradation or elimination of histamine is an enzyme called diamine oxidase (DAO or histaminase). When this elimination process is disrupted, an imbalance, or intolerance can occur.

Because histamine symptoms occur when levels are too high,  the causes of histamine intolerance are related to either consuming too many high histamine foods, taking medications that interfere with the breakdown of histamines, or the inability of the body to clear histamine properly.  The following is a list of some of the more common causes:

Can Gluten Cause Histamine Intolerance?

In reviewing the list of symptoms of histamine intolerance, you probably see a number of symptoms that are shared with celiac disease and non-celiac gluten sensitivity (NCGS). Research suggests that some symptoms of NCGS may actually be mediated by histamine receptors. Receptors are what control the body’s response to histamine, so this connection means that eating gluten might cause histamine-type symptoms in some people.

Which Foods are High Histamine? 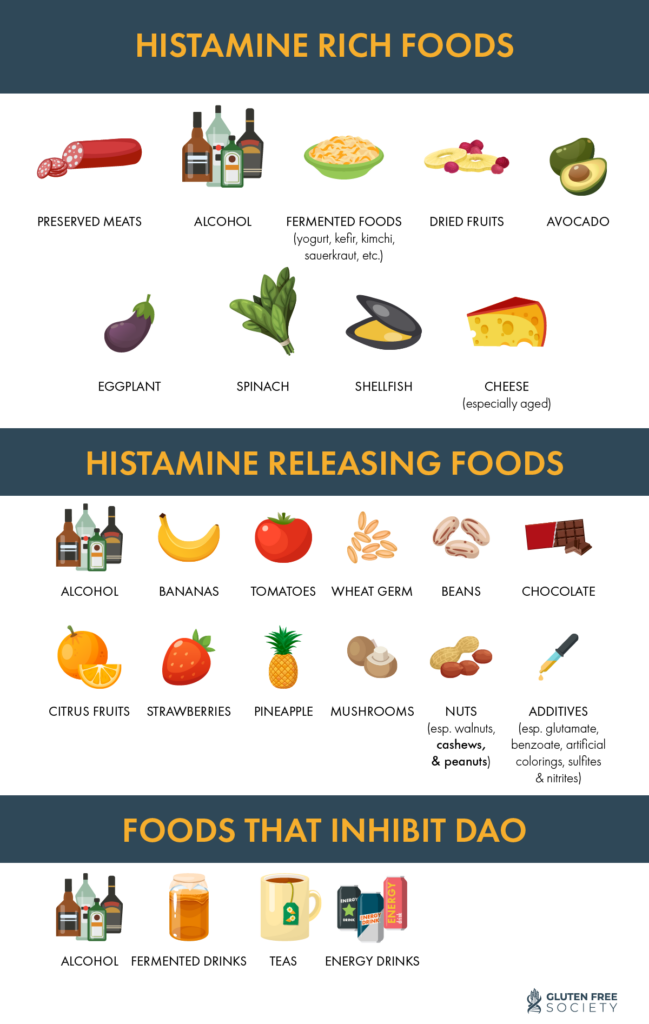 Some foods and beverages that are high in histamine include the following:

In addition, there are a number of foods that trigger histamine release from mast cells in the body, and should be limited by those who suspect histamine intolerance. These include the following:

Finally, certain foods and drinks can block DAO production which in turn can inhibit the body from clearing histamine. These include fermented foods, alcohol, certain caffeinated teas (especially green, black, and mate), and energy drinks.

Which Gluten Free/Grain Free Foods are Low In Histamine? 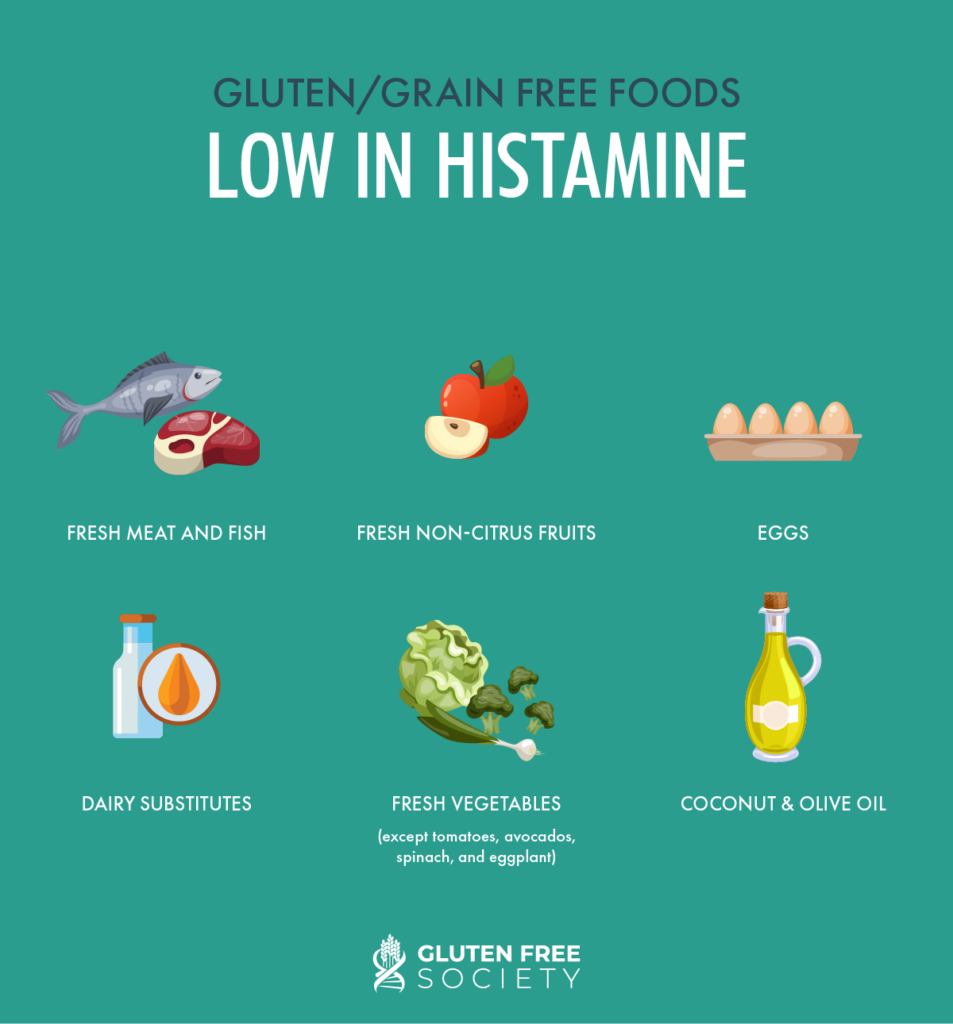 While no food is guaranteed to be entirely free from histamine, there are a number of healthy gluten-free foods that are low in histamine. These include the following:

It’s important to note, however, that histamine increases as food ages. As a result, precooked and leftover foods have higher histamine levels than their fresh counterparts.

How Do You Test for Histamine Intolerance?

What Can I Do to Support Healthy Histamine Levels?

So, what can you do to support healthy histamine levels? In short, you can manage your histamine intake and release, and support DAO production by practicing the following:

Histamine intolerance is not commonly discussed, but not an uncommon condition. I hope this article brings awareness to its existence so that you feel empowered to explore whether it may be impacting your health.

6 thoughts on “Histamine Intolerance and Gluten”