Can Gluten Cause Eye Problems?

Before discussing whether or not gluten can cause eye problems, let’s address some important background information. Celiac disease is often thought of as a disease that only affects the small intestine, creating symptoms like diarrhea, intestinal pain, cramping, weight loss, and malabsorption. While that is true, approximately half of all celiac disease patients present with extra-intestinal (non-gastrointestinal) symptoms, such as anemia, osteoporosis, neurological disorders, infertility, skin concerns, and vision or eyesight problems. Ocular (eye) symptoms caused by gluten can vary according to a person’s genetic predisposition, immune status, gender, and age at onset.

This piece will focus on how non celiac gluten sensitivity and celiac disease can manifest as ophthalmic concerns, which can be derived from both malnutrition or malabsorption and immune alterations. 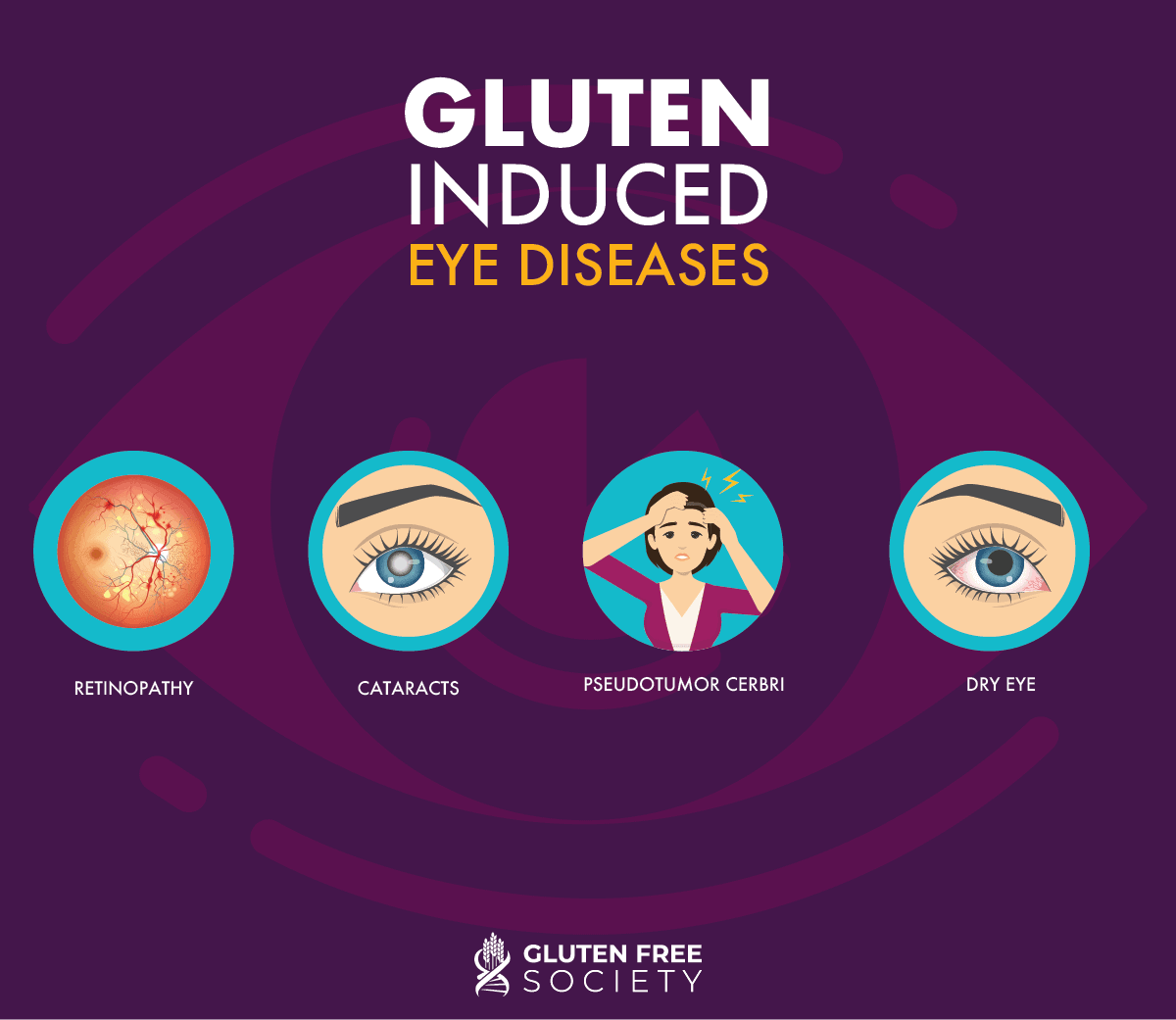 The manifestations related to immune system dysfunction stem from chronic inflammation in the body, a characteristic in autoimmunity and celiac disease. These include orbital myositis, uveitis, thyroiditis associated with orbitopathy and brain occipital calcification.

There are also a variety of autoimmune diseases directly related to gluten exposure that can affect the eyes. For example, dry eye syndrome has been reported in gluten related autoimmune disorders such as Sjogren’s syndrome, rheumatoid arthritis (RA), and scleroderma.

Exophthalmos, or bulging eye occurs in approximately half of patients with thyroid disease – both hypothyroid or Hashimoto’s thyroiditis, and hyperthyroid or Graves disease. Thyroid disease is strongly linked with gluten ingestion and celiac disease.

Finally, there is a suspected link between celiac disease and lupus. Ocular disease occurs in 20 percent of patients with systemic lupus erythematosus (SLE). External ocular manifestations include keratoconjunctivitis sicca, conjunctivitis, uveitis, episcleritis, scleritis, keratitis, and a discoid lupus rash over the eyelids that is often confused with blepharitis.

There is evidence that dietary antioxidants and anti-inflammatory nutrients may help decrease the risk of age-related eye disease. Many of these nutrients are often deficient in those with gluten sensitivity or celiac disease patients.

Beneficial nutrients for eye health that are commonly depleted due to gluten induced intestinal damage include the following: 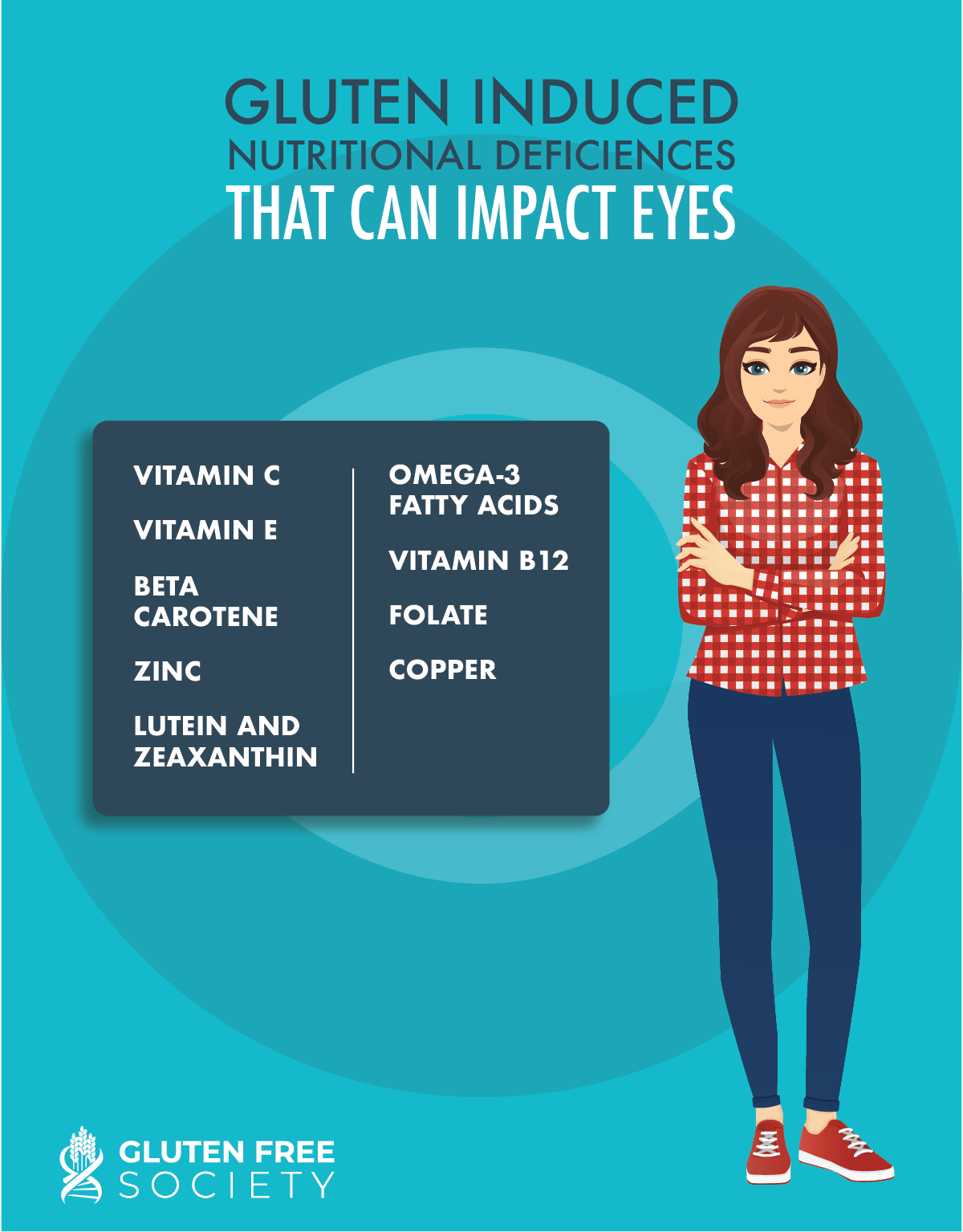 The Role of Nutrition in Eye Health

Many of these nutrients have been studied with respect supporting eye health and preventing vision decline. Nutrition has gained tremendous respect thanks to the ability of these key nutrients to support long-term eye health. Interestingly, over time, our food system has become flooded with processed foods devoid of nutrients, and our produce has become less nutrient dense thanks to commercial farming practices. While food was once enough for healthy eyes and vision, it is now more difficult to achieve eye health while aging without attention to these key nutrients. Conditions like gluten sensitivity and celiac that can cause malabsorption even further exacerbate the need for attention to nutrition and supplementation in order to support long-term eye health and vision.

One study enrolled 3,640 patients with AMD and declining visual acuity to administer high-dose vitamins C and E, beta carotene, and zinc supplements. Comparison with the placebo group demonstrated a statistically significant odds reduction for the development of advanced AMD by supplementing with the antioxidants plus zinc. The study followed these patients for up to nine years.

Another large, randomized study found that women taking B vitamins (including folate and vitamin B12) reduced their risk of early macular degeneration by more than a third after seven years.

Celiac disease and non celiac gluten sensitivity can manifest in many ways outside the digestive system. This includes vision problems and eye disease. Immune alterations and nutrient malabsorption are both culprits in this process.

Furthermore, if you have been diagnosed with celiac disease or non celiac gluten sensitivity, it is wise to be vigilant in testing for, consuming, and supplementing as necessary with nutrients needed for eye health, as they are often found to be depleted even in patients who have been strictly following a gluten-free diet.

2 thoughts on “Eyesight Problems? Gluten might be a factor.”