What’s The Connection? Can gluten cause a folate deficiency? Are those with celiac disease at greater risk for health issues caused by folate deficiency? The simple answer is yes, but before we dive into the topic, let’s discuss why folate (AKA – vitamin B9) is so important. Folate is part of the B vitamin complex. It’s commonly prescribed during early pregnancy to prevent neural tube defects in a growing fetus. But we all need a steady stream of folate.

So let’s take a look at the roles folate plays to understand why. We’ll also discuss how gluten causes a folate deficiency, symptoms to look out for, and the best whole food sources of folate.

In addition, folate helps repair DNA and participates in a process known as DNA methylation. DNA methylation can change the expression of genes without changing the actual DNA sequence.

Folate plays a role in the conversion of a compound known as homocysteine into methionine. This is important because methionine is used to create proteins. It can also be converted into SAMe (S-adenosyl methionine), which is essential for keeping your cell membranes functioning optimally as well as synthesizing hormones and neurotransmitters.

Finally, red blood cell production is dependent on folate. This explains how folate deficiency can cause anemia.

In order to release folate from food and absorb it, you need a healthy, well-functioning digestive system. However, those with gluten sensitivity aren’t so lucky. Because gluten triggers the immune system, which ultimately leads to gut inflammation and damage. As a result, malabsorption ensues along with vitamin and mineral deficiencies.

A 2013 study published in the journal, Nutrients, found that 20% of those with gluten sensitivity were deficient in folate.

Folate deficiencies are also a common cause of anemia among celiac patients.

In this case study, a woman was eating regularly, but she was losing weight and not able to gain weight. She would feel full quickly. And she had diarrhea after eating fatty foods.

Her nutritional status was tested and a folate deficiency was detected as well as biological signs of anemia. Fortunately, she was screened for celiac disease. Anti-gluten and autoimmune antibodies were detected. And a small intestine biopsy confirmed a celiac disease diagnosis.

The woman was prescribed a gluten-free diet and folate supplementation. After 4 months, her folate levels returned to normal. She gained 3 pounds. And her digestive symptoms improved.

So if you have gluten sensitivity, I highly recommend monitoring your folate levels. A deficiency might not be obvious at first because your body has mechanisms in place to compensate. However, your body can’t compensate indefinitely. If you struggle with any of the symptoms or health issues listed below, ask your doctor to test you for folate deficiency.

Many of the symptoms people experience are associated with anemia, which include: 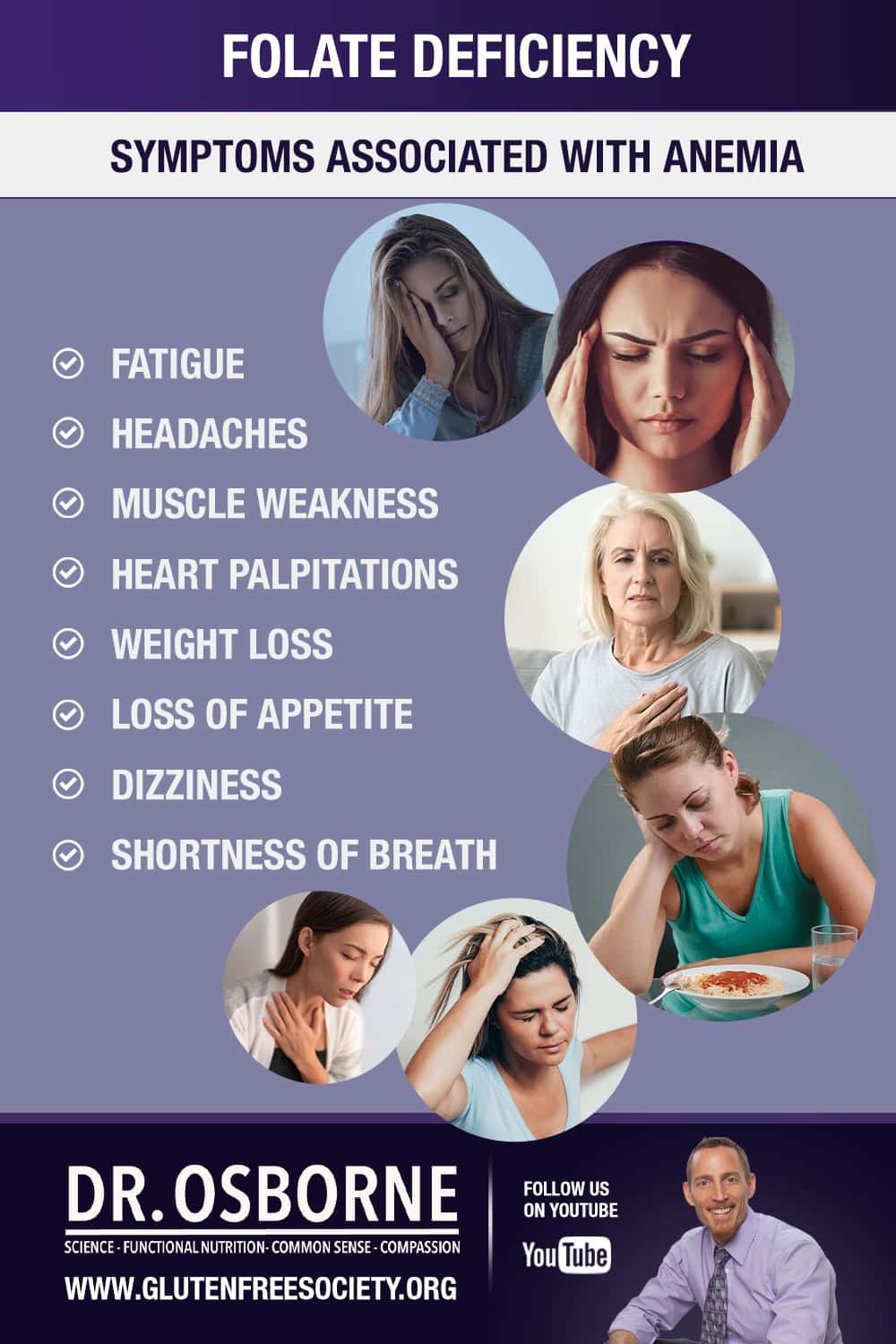 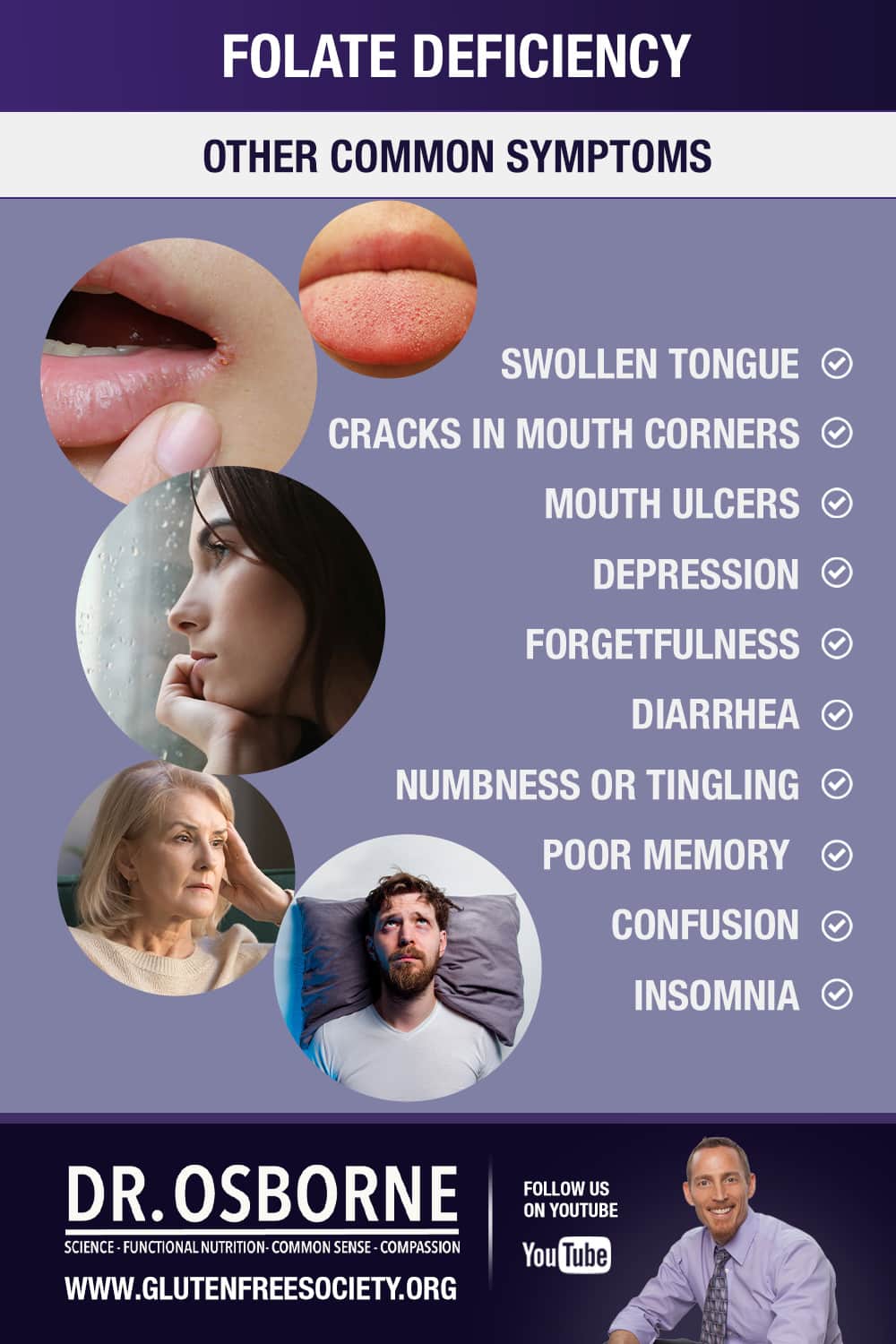 Plus, folate deficiencies are associated with several major health conditions, which include: 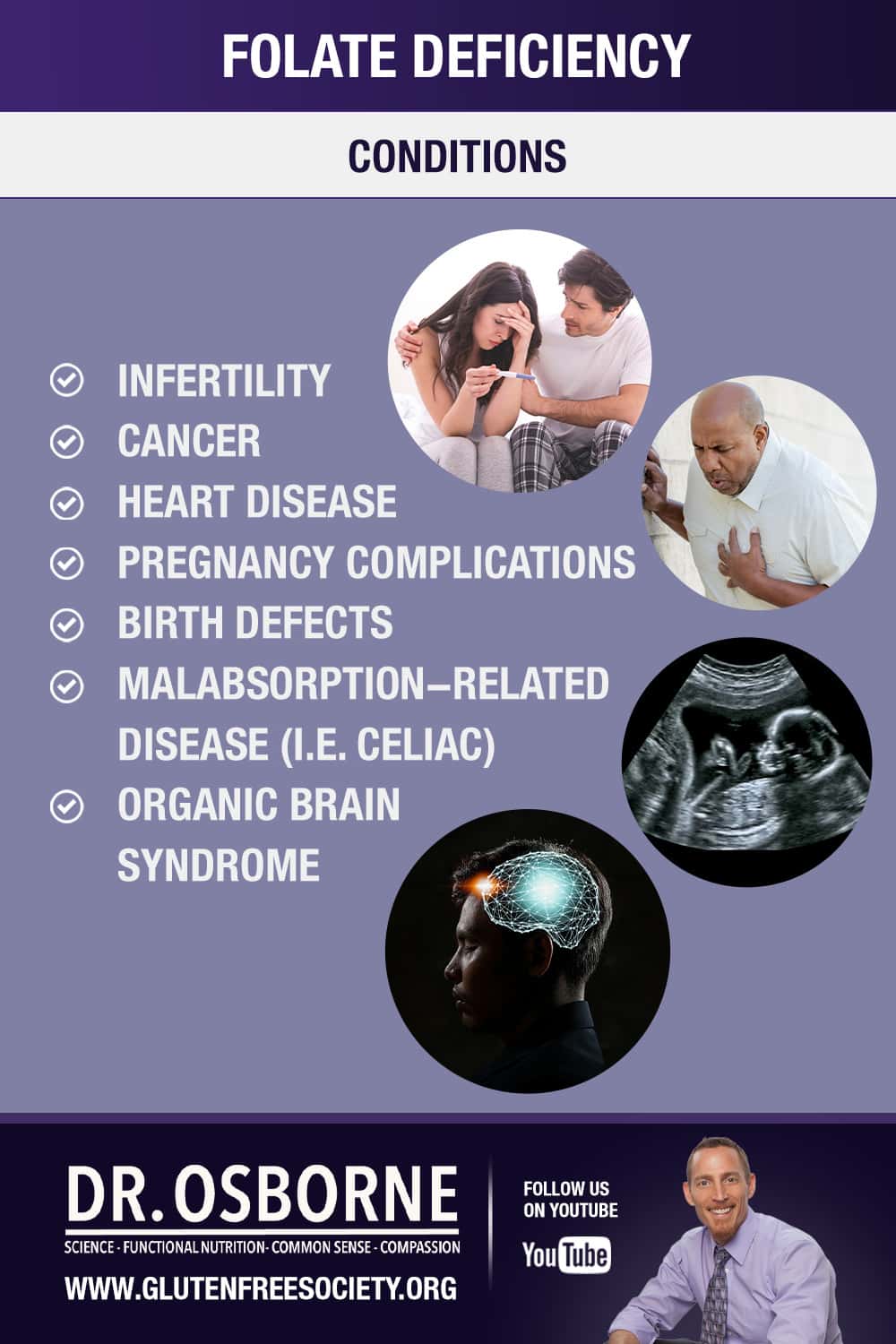 Folate can be stored in your body, but not much. So it’s important to each folate-rich foods regularly. Fortunately, folate is found in a variety of healthy plant foods, which include: 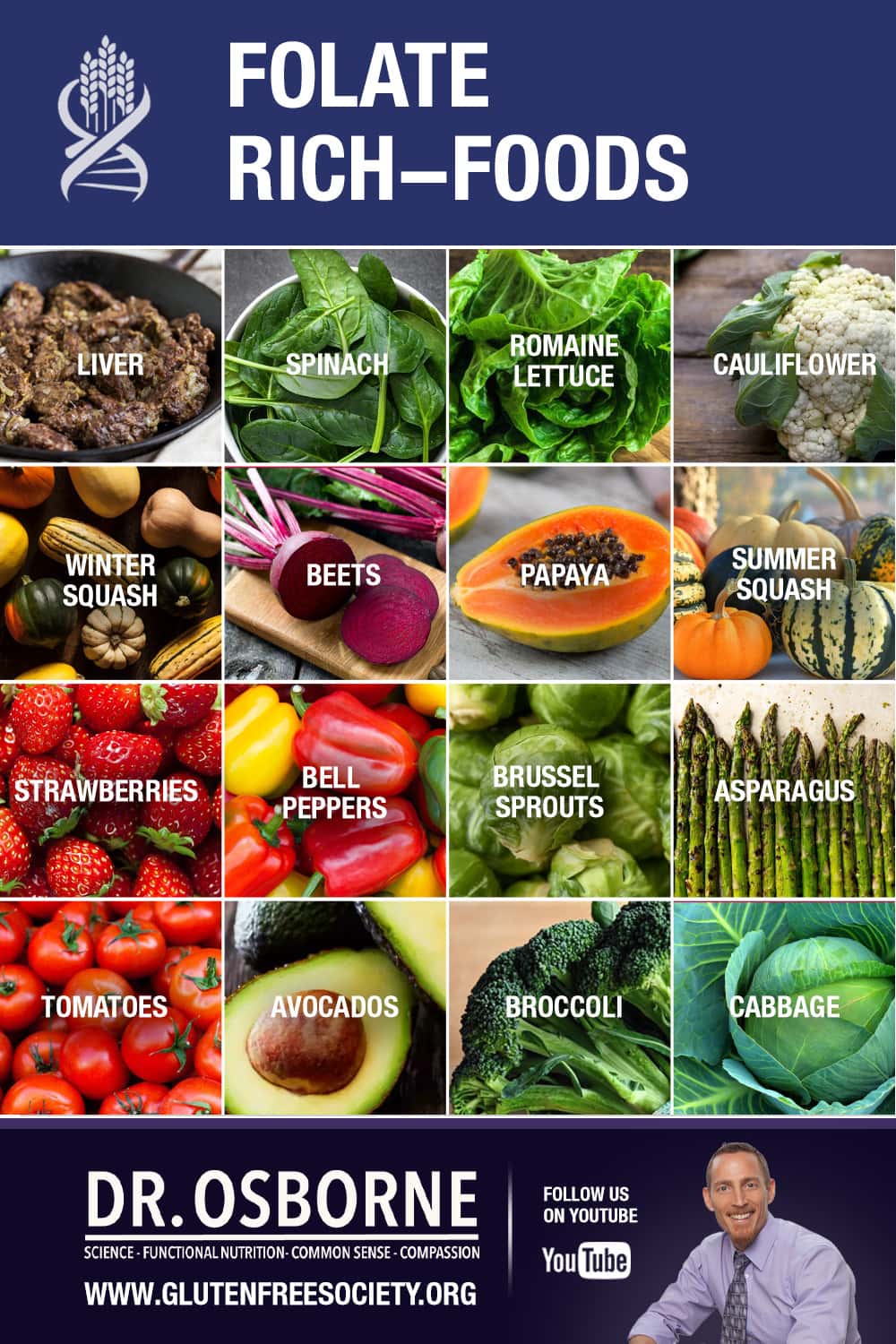 Prolonged cooking can reduce the folate content of foods. So I always recommend eating a mix of raw and cooked foods to maximize your intake of folate.

It’s also important to note that folate is the vitamin’s natural form. On the other hand, folic acid is the synthetic version. It’s found in cheap supplements. Plus, it’s often added to refined grain-based processed foods due to the birth defect risks associated with folate deficiencies.

While supplementation with folic acid has been shown to reduce neural tube defects, there are concerns with overdoing it. Consuming too much folic acid is associated with a worsening of anemia and cognitive function because it can mask a vitamin B12 deficiency.

Evidence also suggests that a high intake of folic acid can promote colon cancer. These are just a few of the many reasons why I don’t recommend eating processed foods or using folic acid supplements. So if your doctor suggests supplementing with folate, I always recommend looking for a supplement that contains folate in the form of L-5-methyltetrahydrofolate.

With that being said, if you have or suspect gluten sensitivity, folate supplementation alone isn’t enough. You must also adopt a gluten and grain-free diet if you want to permanently improve your folate status and heal your body.

Want to learn more about this topic? See Dr. Osborne dive deep in the video below!