Can Gluten Cause Infertility?

Gluten is a scientifically known hormone disruptor, and we also know that it can contribute to problems with conception. A recent research study shed even more light on this topic. Doctors identified that women with gluten problems had much higher rates of unexplained infertility (infertility with no other known cause) recent study demonstrated increased rates of celiac disease in women who present with unexplained infertility. The study evaluated 191 female patients.

It is common knowledge that gluten can cause malabsorption of vitamins and minerals by damaging the gastrointestinal tract. What is less commonly known are the side effects related to the nutritional deficiencies. For example, when celiac disease causes calcium deficiency, the symptoms can manifest in the following ways:

The above is just one example of how grain induced damage can cause problems. There are literally thousands more that could illustrate this point. When it comes to conception and fertility, nutrition is critical. Nutritional deficiencies can contribute to infertility in numerous ways. The diagram below illustrates this point. 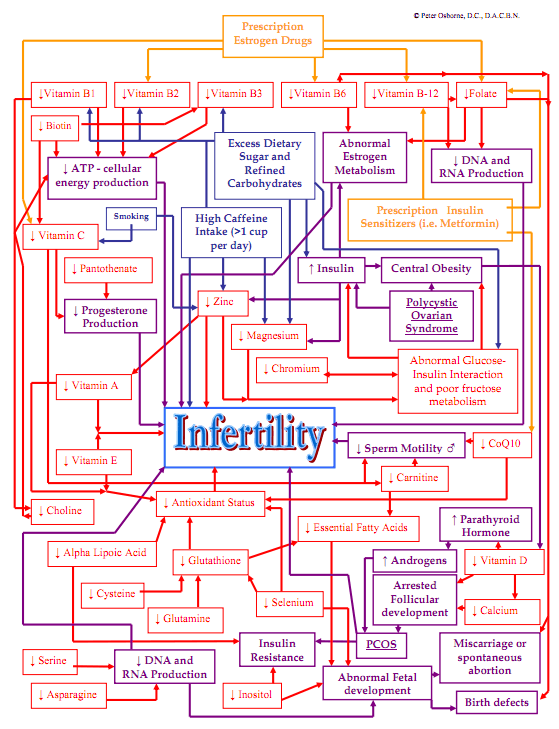 Because we know that people with gluten issues are at greater risk for nutritional problems, it only makes since to investigate these issues in those presenting with infertility. In my opinion, using powerful hormones and drugs to induce a pregnancy for couples who cannot conceive is dangerous and irresponsible. If the mother and father’s nutritional status is not investigated, we open Pandora’s Box on the possibility of birth defects, developmental disorders, and a host of other complications.

All the best,
Dr. O – The Gluten Free Warrior

6 thoughts on “Unexplained Infertility Higher in Woman with Gluten Sensitivity”