We know that thyroid disease is multifactorial, and has several different causes and triggers… but can gluten cause thyroid problems? Many people receive a hypo or hyperthyroid diagnosis as a result of having a blood test performed during a doctor visit. The typical standard of care is for the doctor to then prescribe lifelong medication to treat the condition.

It is extremely uncommon for a doctor to discuss the different triggers of thyroid disease.

Such is the case with thyroid disease and gluten sensitivity. Before breaking down the connection between gluten and thyroid damage, let’s break down some important thyroid concepts for you first.

What is thyroid disease?

The thyroid is a small butterfly shaped gland in your neck that controls your metabolism. It produces the hormones T4 (thyroxine, contains four iodide atoms) and T3 (triiodothyronine, contains three iodide atoms) which tell the body’s cells how much energy to use.

When the thyroid is not functioning normally, it can lead to a number of issues. The thyroid can become overactive or underactive, or the body can start to produce antibodies against its own thyroid or thyroid hormone receptors. We can categorize thyroid dysfunction into two main categories, each with another unique autoimmune component:

According to the American Thyroid Association, more than 12 percent of the US population will develop a thyroid condition during their lifetime. The organization estimates that: 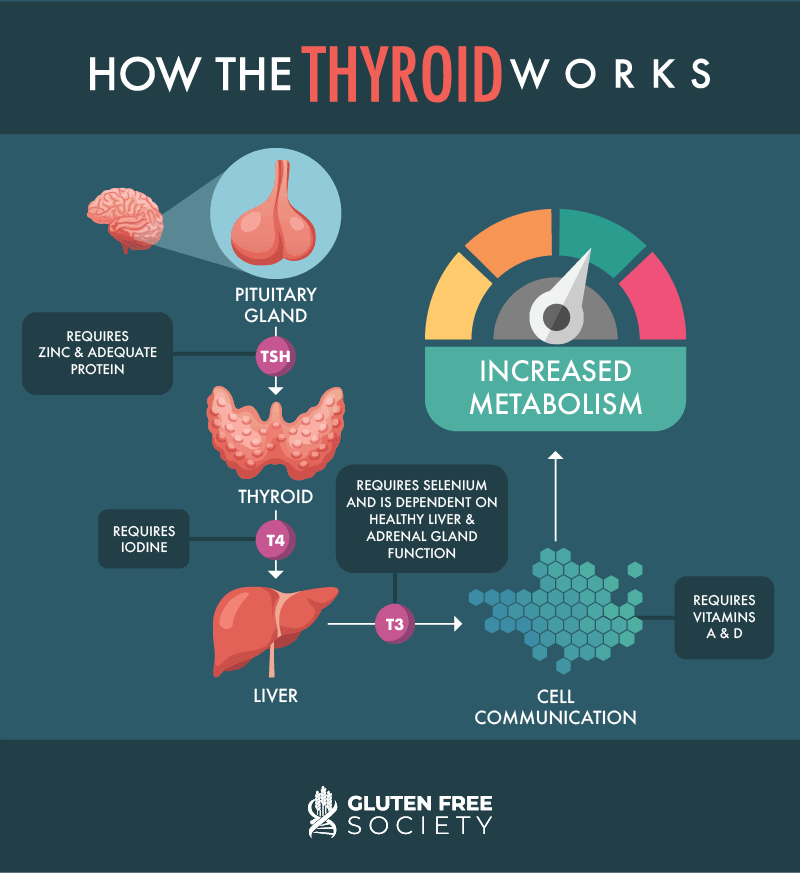 There are a number of factors that play into the development of thyroid disease, but first lets focus on the often overlooked nutrient needs of the thyroid gland.

In order to regulate and make thyroid hormone, the body needs certain nutrients. These nutrients should be provided by the diet, but a healthy gut flora also plays a role in delivering nutrients for thyroid function.

The absence of any of these nutrients can suppress thyroid function and disrupt thyroid pathways, causing the thyroid to not work efficiently. Gluten induced malnutrition is one of the major mechanisms of thyroid hormone dysfunction.

Is Thyroid Disease Related to Celiac Disease and NCGS?

We know that celiac disease and non-celiac gluten sensitivity (NCGS) can be related to a number of other health conditions, from depression to skin concerns. But is there a link between celiac disease and NCGS and thyroid disease? Let’s take a look.

Due to the increased awareness around NCGS, some studies have attempted to identify whether there is an increased prevalence of thyroid dysfunction among individuals with NCGS as well. A review of literature published in the American Journal of Gastroenterology found promising evidence that a link may exist – particularly in those with Hashimoto’s thyroiditis developing NCGS. Another study compared individuals with celiac disease and non-celiac wheat sensitivity and found that similar proportions of individuals with non-celiac wheat sensitivity and celiac disease (29% in both cases) developed an autoimmune disease (predominantly Hashimoto’s thyroiditis). 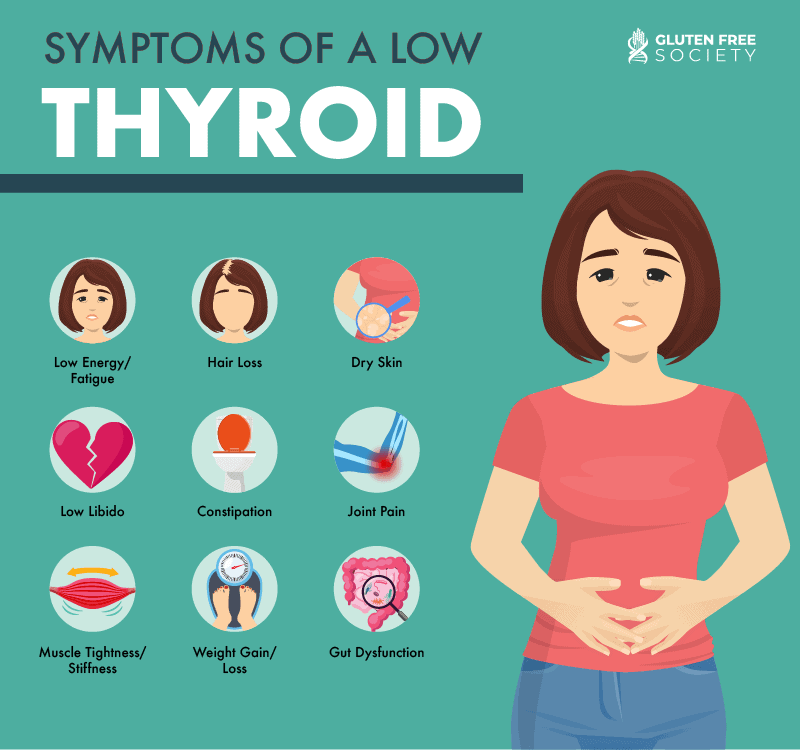 How a Gluten Free Diet Helps with Thyroid Issues

There isn’t just a link between celiac disease and thyroid dysfunction, there is also evidence to suggest that a gluten free diet can improve thyroid function and related symptoms in those with thyroid dysfunction, including those with autoimmune thyroid conditions. While much of the research focuses on Hashimoto’s thyroiditis, there is also some compelling research supporting the benefits of a gluten free diet for those with Graves hyperthyroidism.

The same study referenced above that looked at the link between celiac disease and thyroid disease also looked at the impact that a gluten free diet has on thyroid function. The researchers found that in certain cases, gluten withdrawal may single-handedly reverse the thyroid dysfunction.

Another study evaluated children aged 1-12 with celiac disease and concluded that compliance with a gluten free diet can help reduce incidence of autoimmune thyroiditis and also maintain a healthy thyroid in existing celiac disease patients.

While research supporting the benefit of a gluten free diet on those with general thyroid dysfunction and with autoimmune hypothyroid (Hashimoto’s) is more robust, a number of studies have acknowledged that a gluten free diet likely benefits those with Graves hyperthyroid as well, and that there is enough evidence to warrant further research. One case review is particularly compelling. It followed a 37-year-old woman with Graves’ disease as well as thyrotoxicosis (excess circulating thyroid hormones in the bloodstream) that was not responsive to medical management. She tested positive for celiac disease, and after initiation of a gluten free diet, her thyrotoxicosis responded to medical management and thyroid health stabilized.

You might be wondering, if a gluten-free diet can help manage thyroid dysfunction, could it prevent thyroid disease to begin with? One review of literature on the topic attempted to answer this question, looking specifically at thyroid autoimmunity. The conclusion? Unfortunately, still not clear. While some studies suggested that gluten-free diet may aid in prevention of autoimmune thyroid disease, others found no support. However, the researchers concluded based on their review that “a beneficial effect of a gluten free diet may be expected, since in general, in children as well as in adults, intestinal inflammation and the associated dysbiosis, with or without underlying celiac disease, are known to promote extra intestinal autoimmune diseases.” Therefore, any measure, including a gluten-free diet, that would help to manage gut inflammation in celiac disease patients may positively impact the evolution and perhaps the manifestation of thyroid autoimmunity. 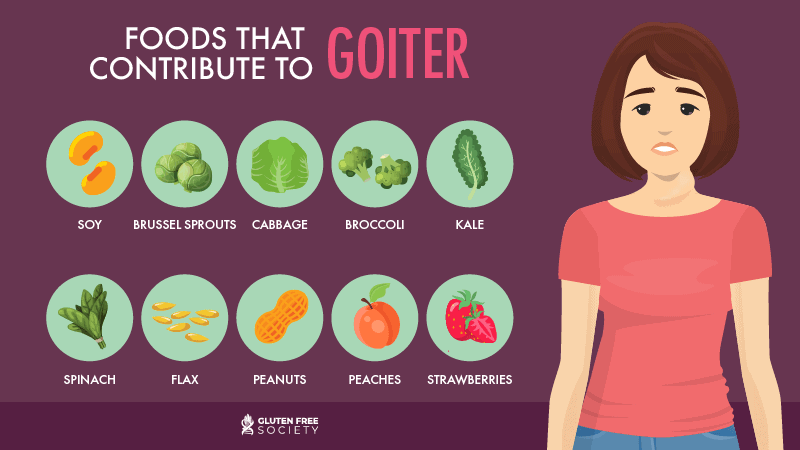 A gluten free diet may also support the thyroid in that it involves avoiding wheat-containing bread, which typically contains bromide (appears as the ingredient potassium bromide on food labels). Potassium bromate is illegal in China, Japan, the European Union, Canada, Brazil and elsewhere because it has been linked to cancer in rats and mice. In the United States, however, it has remained legal since it was first patented for use in baking bread in 1914.

Commercial bakers love potassium bromate for its efficiency and consistency in bread baking – it bleaches the dough and enhances its elasticity, creating thin-walled bubbles as the bread rises. The end product is fluffy, soft, and white.

But when it comes to thyroid health, bromine can be quite detrimental. Once inside the body, it competes for the same receptors as iodine. Since the thyroid gland needs iodine to make thyroid hormone, bromine can inhibit proper uptake of iodine in the body and therefore prevent the body from being able to make thyroid hormone. Studies have shown that an increase in blood bromine levels can cause an increase in plasma TSH concentration. Therefore, one of the mechanisms by which a gluten free diet supports thyroid health is by avoidance of this detrimental ingredient.

What Causes the Link Between Celiac Disease and Thyroid Health?

Because of the apparent link between celiac disease and thyroid health, many researchers have attempted to hypothesize theories as to the root cause or contributing factors. Below are some likely scenarios:

Celiac disease often results in a damaged intestinal barrier and permeability of the intestine. This can lead to the leaking of antigens into the bloodstream, which can prompt an immune response and inflammation elsewhere in the body. This reaction can then trigger further autoimmunity.

Research has shown that thyroid and intestinal diseases prevalently coexist, not only due to a bacterial imbalance and damaged intestinal barrier or leaky gut, but also because the composition of the bacteria in the gut has an influence on the availability of essential micronutrients for the thyroid gland.

Research has suggested that the tissue transglutaminase (tTG) antibodies in individuals with celiac disease bind to thyroid follicles and may contribute to the development of thyroid disease in celiac disease.

Gluten containing grains are often heavily sprayed with endocrine disrupting pesticides – research is beginning to explore the implications of glyphosate and other pesticides on thyroid function. Individuals who consume these grains prior to celiac disease diagnosis may be unknowingly damaging their thyroid health as well. 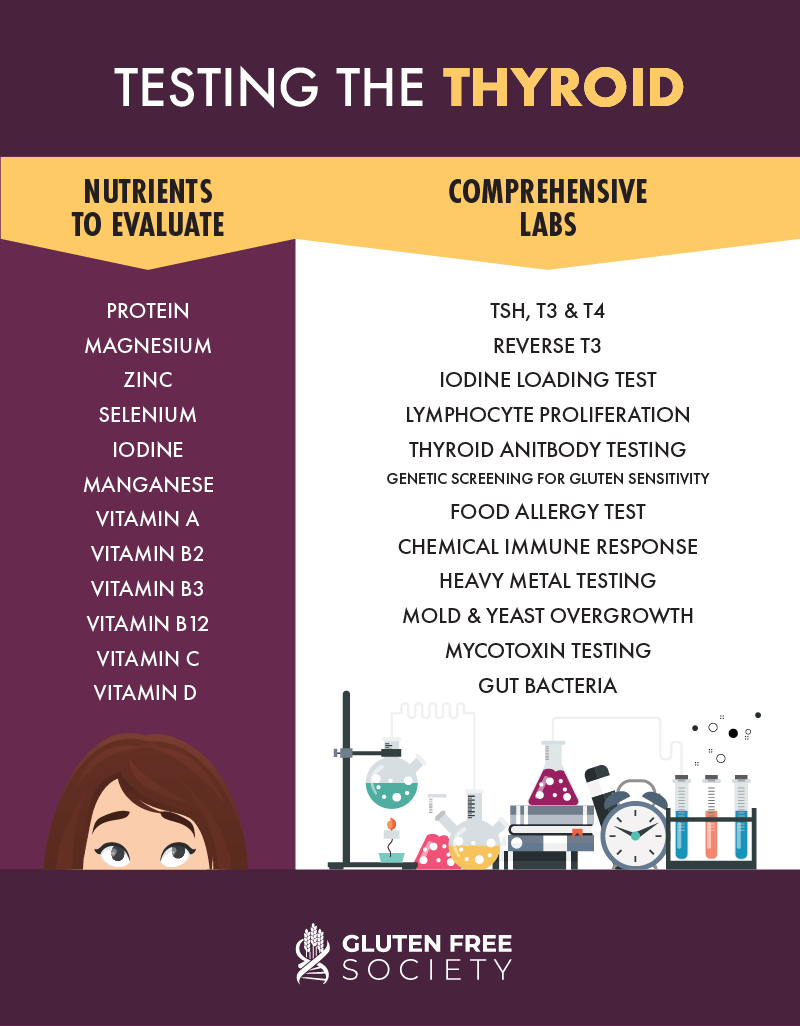 How Nutritional Deficiencies Caused By Gluten Can Impact Thyroid Function

It’s clear that there is a link between celiac disease (and NCGS) and thyroid dysfunction, and that a gluten free diet can help manage thyroid conditions. However, there is another important link to discuss. That is that many of the nutritional deficiencies caused by gluten can impact the thyroid and its functions. Below are some common malabsorption-related deficiencies found in those with celiac disease and NCGS and how they may impact the thyroid:

It is clear that a link exists between thyroid dysfunction, non celiac gluten sensitivity, and celiac disease. These conditions are increasing in prevalence but screening for one at diagnosis of the other is not yet a common practice. Understanding the relationship between intestinal health and thyroid health can help both patients and practitioners get to the root of their health concerns and symptoms, and to address them appropriately.

13 thoughts on “Can Gluten Cause Thyroid Disease?”