Can gluten cause asthma? This is a question that researchers have been asking for many years. If you suffer with asthma or COPD, keep reading to learn more about the connections between gluten, grain, celiac disease, and asthma.

Asthma affects approximately 25 million adults and children in the United States. It’s an inflammatory disorder that involves the airways that lead to your lungs.

A trigger causes irritation, which causes your airways to swell and mucus to form as part of your body’s immune response. Your muscles surrounding your airways also tense up. And when these things happen, it can become difficult to breathe as well as cause an “asthma attack”, which may involve:

Some people are more at risk than others, such as those that are genetically susceptible. For example, this study found that genetics account for 70% of your risk for developing asthma.

Because asthma is an inflammatory condition, it’s possible that other inflammatory disorders increase your risk. Those with a history of viral lung infections, such as RSV (respiratory syncytial virus), may also be more likely to develop asthma. Other conditions that may raise your risk include:

Research has quoted the “hygiene hypothesis” as a potential factor, which suggests that infants and children that aren’t exposed to a healthy dose of beneficial bacteria develop weak immune systems that can increase their chances of developing immune-related diseases like asthma. For instance, it may cause their immune system to overreact to a stimulus that isn’t inherently dangerous, such as pollen or dust.

In this study, researchers studied two groups of farmers. The Amish and the Hutterites. They have similar lifestyles and genetic backgrounds. But the Amish use traditional farming practices and the Hutterites use mechanical techniques.

It was reported that the prevalence of asthma was 4 to 6 times lower among Amish children when compared to the Hutterites. The load of bacterial metabolites found in the homes of the Amish was also 7 times higher than the Hutterites. Thus, the researchers concluded that the bacteria-rich environment of the Amish was protective against asthma due to its ability to strengthen the innate immune system.

It’s interesting to note that the prevalence of asthma has grown substantially over the past 50 years. And the “westernization” of our society is one possible explanation. Because our genes don’t mutate rapidly enough to account for the rise. Thus, research suggests environmental toxins, processed foods, and busy lifestyles may be contributing factors. There’s also less bacterial diversity in city environments.

The conventional treatment for asthma often involves prescription medications, which include steroids and anti-inflammatories. However, these drugs only mask your symptoms. They may help reduce inflammation temporarily and dampen your immune response to triggers, but they don’t eliminate your triggers. This means if you stop taking your medications, your asthma will likely come back as soon as your triggers are present. So eliminating triggers within your control is the safest, most effective treatment.

There isn’t one specific trigger for asthma. And triggers may vary from person to person. But some of the most common triggers and contributing factors to asthma include: 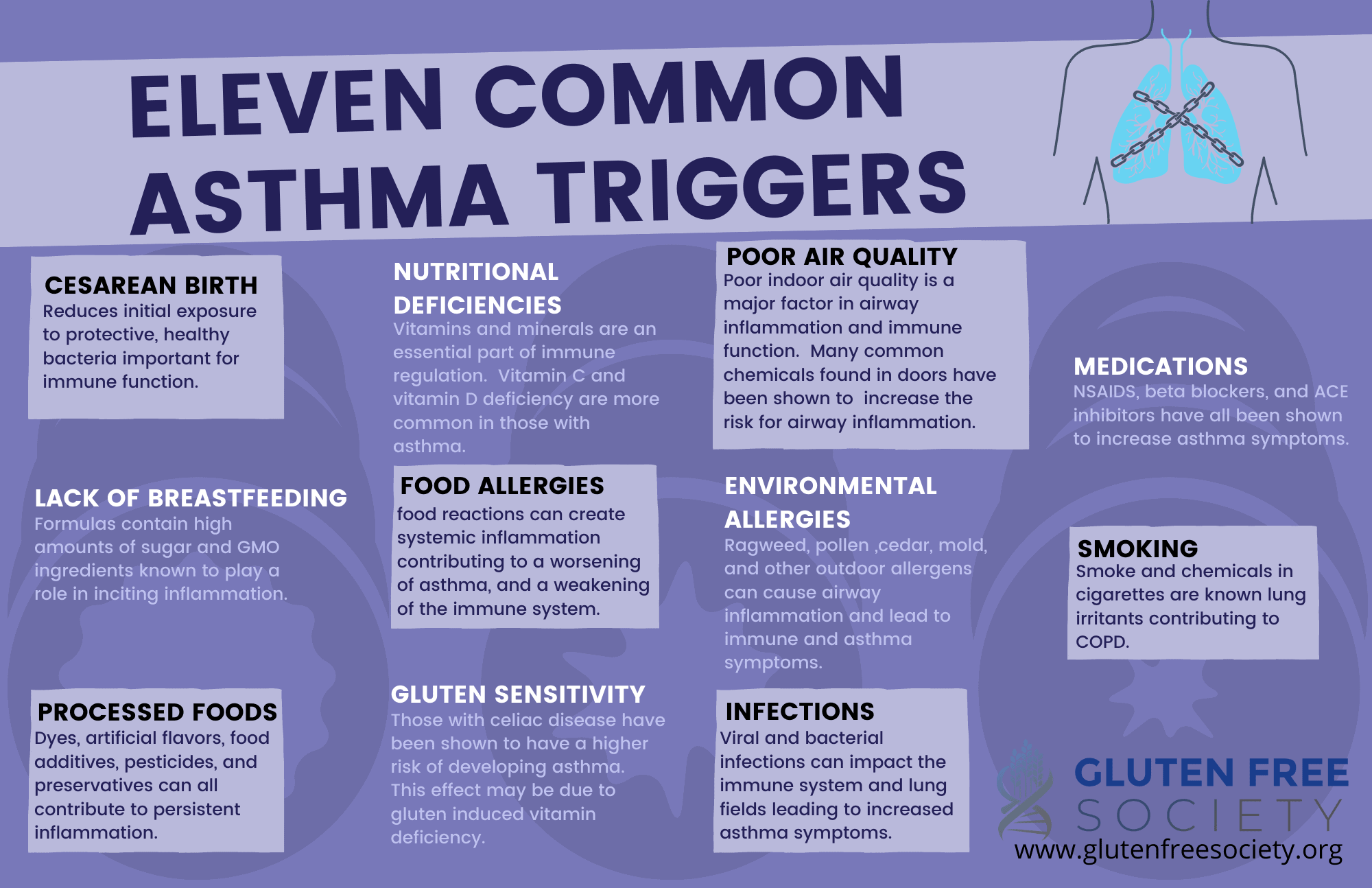 **For a full breakdown and explanation of the diagram above, watch this video.

Now, the triggers I’m going to discuss in this article relate to food. Specifically gluten and grains as well as chemicals found in processed grain-based food products.

Like celiac disease, asthma has been associated with other inflammatory and autoimmune conditions. This suggests that asthma doesn’t just cause inflammation in your airways. So it’s not surprising there’s evidence of a connection between asthma and celiac disease.

In this study, researchers discovered that gluten triggers a cascade of events in those with celiac disease that can lead to the release of compounds known as leukotrienes, which are inflammatory molecules produced by immune cells. Interestingly, we also know leukotrienes are released during asthma attacks. And leukotrienes are primarily what cause airway constriction, which leads to wheezing, coughing, and shortness of breath.

In this study, researchers examined 12 maternal relatives of a young patient with celiac disease. They found that 75% of the group had anti-gluten antibodies, which is a sign that their immune systems were reacting to gluten. And 46% of the group also had asthma.

Another study determined that even among children with genetic mutations associated with celiac disease, those with asthma and a family history of asthma were over 2 times more likely to develop celiac disease than those without. Thus, it’s possible that asthma and celiac share some genetic factors. However, more research is needed in this area to know for sure.

I have also written about the connection between gluten and asthma here.

It is important to note that gluten can contribute to malabsorption of vitamins and minerals leading to deficiencies that can disrupt health and normal body function. Two deficiencies that should be noted as it relates to asthma are vitamin D and vitamin C. Research has shown that low levels of these nutrients are both linked to asthma, but can also make asthma symptoms worse.

Wheat is one of the most commonly grown grain in the world. It’s also on the list of most common food allergens.

I’ve already discussed the role leukotrienes play in asthma attacks. And histamine also causes airway constriction. Plus, it increases the production of mucus and causes swelling in the airways during an asthma attack.

There’s also a condition known as baker’s asthma. It’s most common among bakery employees that work with wheat flour on a daily basis. And their asthma-like symptoms are associated with inhaling the flour or from frequent contact with their skin.

In addition to gluten and wheat, grains as a whole may also contribute to asthma for some. Because grains are often contaminated with mold and pesticides.

Similar to wheat allergy, mold allergy can cause the release of histamine and leukotrienes, which can cause asthma symptoms.

The molds tested in the study above were Alternaria and Cladosporium. The species Alternaria is known for infecting and causing disease in crops, including wheat and other cereal grains.

The Alternaria species also produce toxins (a.k.a. mycotoxins), which may make matters worse. In this animal study, researchers reported more severe airway inflammation and cellular damage when mice were exposed to both fungus and mycotoxins as compared to fungus alone.

The Cladosporium species is one of the most commonly found molds. It’s found indoors and out. It’s been found on cereal grains. And their spores are known to be highly allergenic.

It’s also worth noting that even if grains aren’t infected in the field due to the use of herbicides or other organic measures, they may still be infected during processing and storage.

For more information on mold toxicity and health, you can watch this series on mold and autoimmunity here.

Cereal grains are heavily sprayed with pesticides to increase their yield. Wheat is also often sprayed with glyphosate to speed up the drying process.

Consuming pesticides can disrupt your gut bacteria balance, which can alter your immune function and increase your risk of asthma. Similar to how babies that aren’t exposed to enough beneficial bacteria at birth have an increased risk of developing immune-related inflammatory disorders, including asthma.

A majority of the data linking pesticides to asthma comes from farmers. Not only are pesticides associated with asthma among farmers, but they’ve been shown to exacerbate asthma in farmers with allergies.

More research is needed among the general population, although a few studies have been performed. In this study, about 23% of city dwellers had a negative reaction to three or more chemicals, which included pesticides, paint, perfume, car exhaust, and new carpet. Interestingly, these study participants were also more likely to report asthma symptoms, such as wheezing, shortness of breath, and a tight chest.

As I mentioned previously, a “westernized” lifestyle is believed to be a contributing factor to the rise in asthma throughout the world. And the Western diet is highly processed and loaded with sugar and starch from grains.

A long-term diet rich in starch and sugar is strongly linked to obesity. And obesity is a risk factor for asthma. In fact, 58% of adult asthma patients are also obese. Immune dysfunction and inflammation may be contributing factors. For instance, your fat cells can only hold so much before they swell and become inflamed. When this happens, your immune system is activated and both your immune cells and fat cells begin to release inflammatory compounds that travel throughout your body.

It’s also known that processed foods alone can promote inflammation, which can increase your risk for other inflammatory disorders like asthma. This is because processed foods lack protective nutrients and also contain a cocktail of chemicals in the form of emulsifiers, preservatives, pesticides, food dyes, flavors, and more. Plus, food additives can cause gut bacteria imbalances.

Finally, processed foods lack fiber, which is a source of food for beneficial gut bacteria. Some species of bacteria ferment the fiber to create short-chain fatty acids (SCFA). And SCFAs have been shown to influence the immune system as well as reduce airway inflammation in animals. Animal studies have also found that high fiber diets are protective against airway related allergic reactions. And pregnant mice that ate sufficient amounts of fiber passed the benefits on to their offspring.

Many foods are classified as mucogenic – AKA foods that increase your body’s mucus production. For those suffering with asthma, airway inflammation, or COPD, these foods can exacerbate breathing issues and contribute to shortness of breath and difficulty breathing. Some of the most common mucus forming foods are gluten containing grains. Other foods that can trigger excess mucus production include:

Can Gluten and Grains Cause Asthma?

For some, gluten is an irritant. It triggers the immune system and can create body wide inflammation. And even if your body doesn’t react to gluten, it may react to other wheat proteins or contaminants and chemicals in grains and processed foods.

So if you suffer from asthma, don’t rule your diet out as a contributing factor. Because prescription medications aren’t a safe and effective long-term solution. On the other hand, what harm can come from ditching grains and eating more nutrient-dense whole foods? None!

Did changing your diet alleviate your airway inflammation? Comment below.

One thought on “Can Gluten Cause Asthma?”