Can Gluten Cause Heart Disease?

Can Gluten Cause Heart Disease?

Heart disease is the number one cause of death in the United States. And we’ve been led to believe that eating red meat is the leading dietary risk factor because of its saturated fat and cholesterol content. However, mounting evidence doesn’t support this claim. Instead, current science suggests that gluten-containing grains may be a bigger problem. Can gluten cause heart disease? Let’s look at the science.

Now, there are many factors that promote inflammation. And gluten is one of them for those with celiac disease and non-celiac gluten sensitivity.

Celiac disease is an autoimmune condition triggered by gluten. Essentially, when a person with celiac disease eats gluten-containing foods, their immune system attacks and damages the lining of their small intestine. And this process causes inflammation in their gut as well as throughout their body.

Inflammation identified in those with celiac disease has been associated with several types of heart-related conditions, including stiffness in the aortic artery as well as the early formation of plaques.

Myocarditis, inflammation of the heart muscle, has also been observed in those with untreated celiac disease. Essentially, in addition to the immune system attacking the small intestine, a similar process leads to the attack of heart muscle tissue, which causes injury and inflammation.

Plus, blood clots and their complications (i.e., heart attack and stroke) are linked to celiac disease, which have ties to inflammation as well as nutrient deficiencies.

Many without celiac disease also negatively react to gluten due to gluten-sensitive genes. This is referred to as non-celiac gluten sensitivity or NCGS. With NCGS, the immune system also overreacts to gluten, which causes damage and inflammation. However, the small intestine isn’t the primary target. The truth is gluten can cause inflammatory damage to every tissue in the body, including the brain, liver, skin, thyroid, joints, and heart.

Common symptoms associated with NCGS are fatigue, headaches, and joint and muscle pain. These symptoms can be debilitating and make it harder to exercise. And physical inactivity is known to contribute to obesity and type 2 diabetes, which are significant risk factors for heart disease.

Because gluten damages the lining of the gut and reduces its ability to absorb nutrients, vitamin and mineral deficiencies are common. 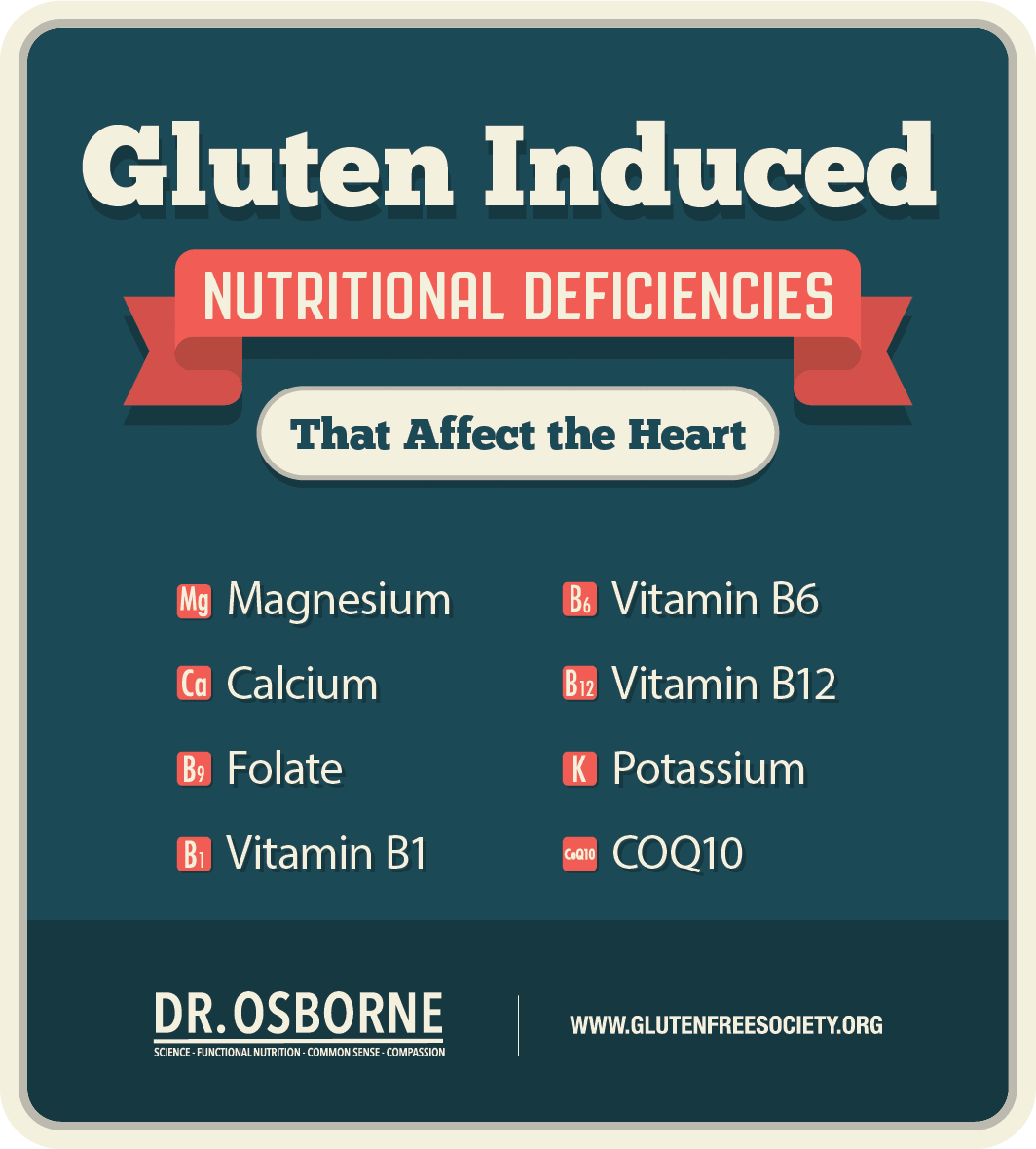 For example, studies have shown that those with celiac disease are often low in vitamin B12, folate, vitamin D, iron, zinc, selenium, magnesium, and calcium.

This is problematic because chronic nutrient deficiencies can cause physical stress and inflammation, which often leads to disease.

Mounting evidence suggests that vitamin D deficiency is associated with an increased risk of heart disease and its risk factors, including type 2 diabetes and high blood pressure. For example, in a study of 230 heart attack patients admitted to a hospital, 96% of them had abnormally low vitamin D levels. 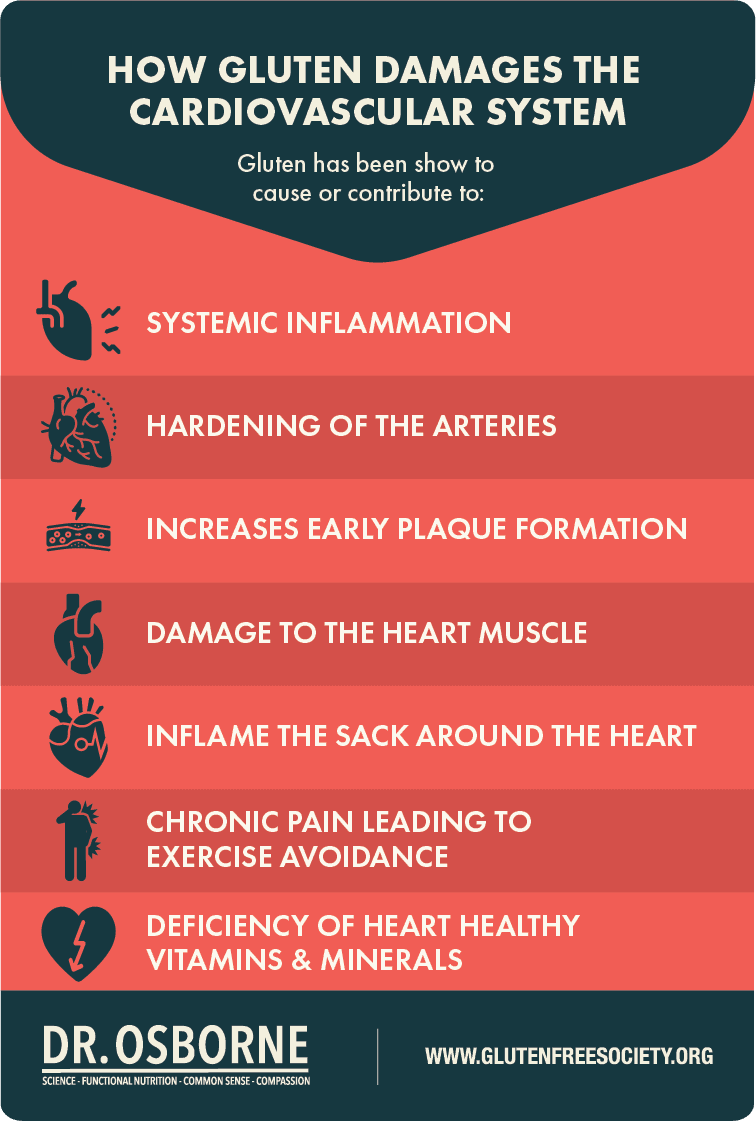 Something else we must consider is that most foods that contain gluten are heavily processed in the form of bread, pasta, cereal, crackers, cookies, and so on. And it’s important to understand that gluten isn’t limited to wheat, barley, and rye grains. Because gluten proteins come in multiple forms. And some form of gluten is found in the seeds of every grain belonging to the grass family.

For example, alpha gliadin is the gluten protein in wheat. Zein is found in corn. And oats contain avenin. This means “gluten-free” products, often made with corn, rice, and oats, aren’t truly gluten-free.

Thus, processed foods are what we call “empty” calories. They’re less likely to fill you up, which can lead to overeating and contribute to weight gain when consumed regularly. And there’s mounting evidence linking processed foods to obesity, elevated blood sugar, insulin resistance, and high blood pressure. 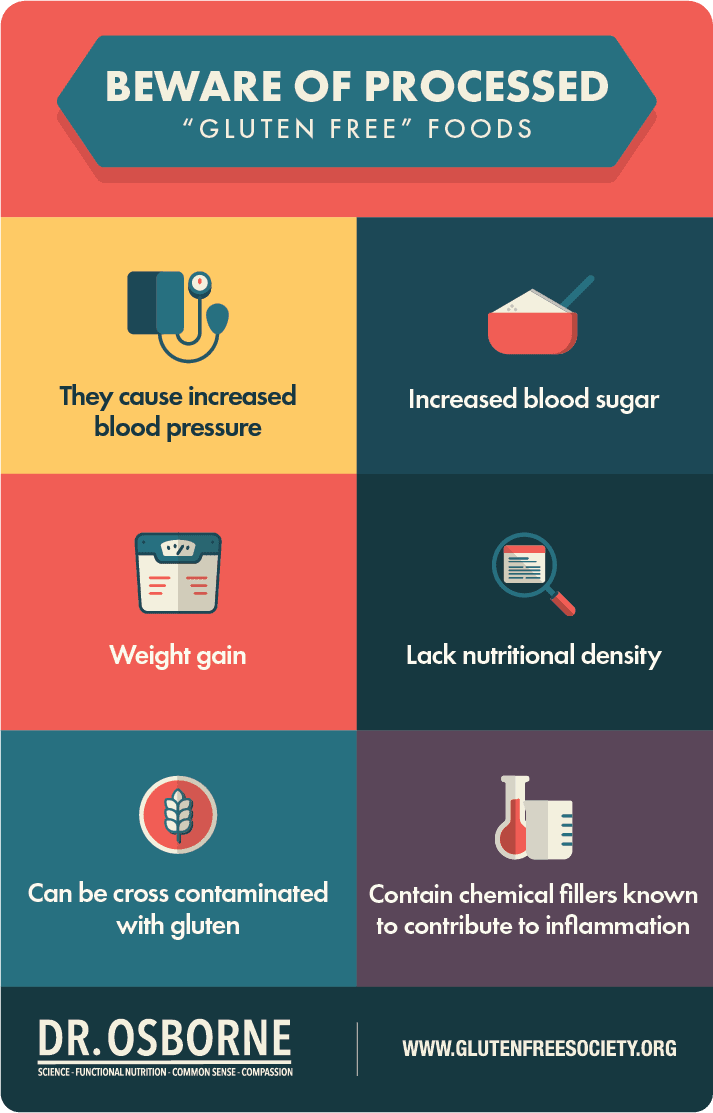 Processed foods also contain food additives, such as emulsifiers, preservatives, and thickeners. And science is beginning to find that these food additives alone may promote inflammation, insulin resistance, and obesity.

It’s also worth noting that many food additives are derived from gluten-containing grains. For example, malt extract is made from barley. Corn is used to make maltodextrin, high fructose corn syrup, and monosodium glutamate (MSG) among many others. Even xanthan gum, a common ingredient in “gluten-free” foods, may be derived from corn and wheat.

As you can see, processed foods are associated with many heart disease risk factors. Thus, it’s not surprising that science has also found a link between eating them and an increased prevalence of heart disease.

Here is another article that outlines ingredients to avoid on a TRUE gluten free diet – https://www.glutenfreesociety.org/guidelines-for-avoiding-gluten-unsafe-ingredients-for-gluten-sensitivity/

In Summary – Can Gluten Cause Heart Disease?

For those with celiac disease and non-celiac gluten sensitivity, gluten contributes to inflammation and nutrient deficiencies. In addition, gluten-containing foods are heavily processed and linked to obesity, inflammation, and poor metabolic health. All outcomes that increase your risk of developing heart disease, which helps explain why the prevalence of heart disease is estimated to be twice as high in those with celiac disease than those without. Can gluten cause heart disease? The simple answer is yes. So if you’re gluten-sensitive or have celiac disease, please be sure to talk to your doctor about your heart health.

If you want to learn more, here is our live session on this topic:

One thought on “Can Gluten Cause Heart Disease?”