Can Gluten Cause Early Menopause?

Can Gluten Cause Early Menopause?

Before tackling this question, let’s discuss a few basic definitions that will help you to understand this topic better.  The female menstrual cycle or menstruation, is the monthly hormonal cycle that a female’s body goes through to prepare for pregnancy.  This cycle is regulated by several different hormones to include estrogen, progesterone, follicle stimulating hormone (FSH), and luteinizing hormone (LH).

From puberty until middle age, healthy, well nourished women experience a monthly cycle that consists of four phases: menstruation, the follicular phase, ovulation and the luteal phase. Menopause is the cessation of this cycle. 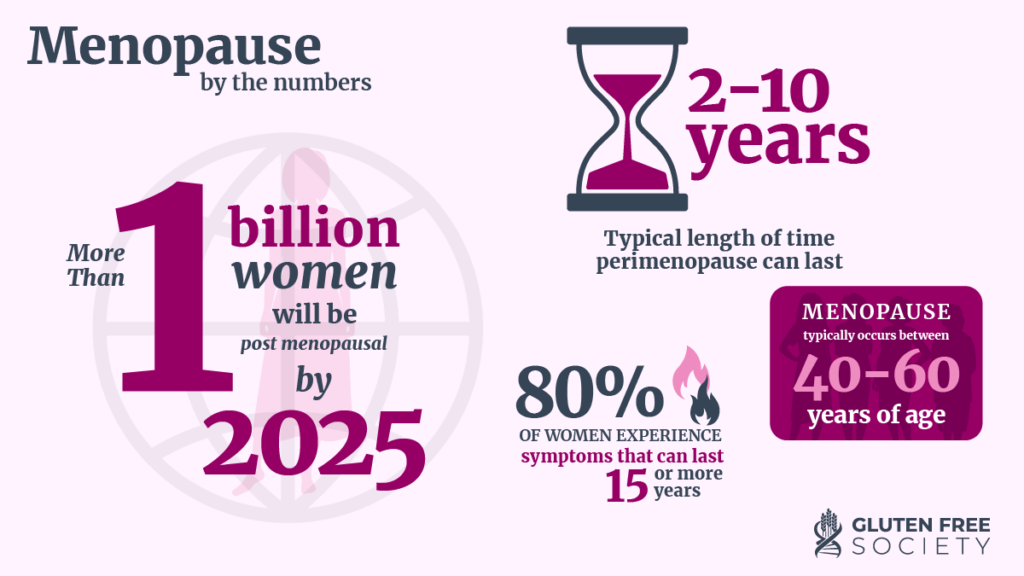 The significant hormonal shifts that take place during menopause ​​can cause some unpleasant and uncomfortable symptoms for many women. These symptoms can last several months, or even years, and may include the following: 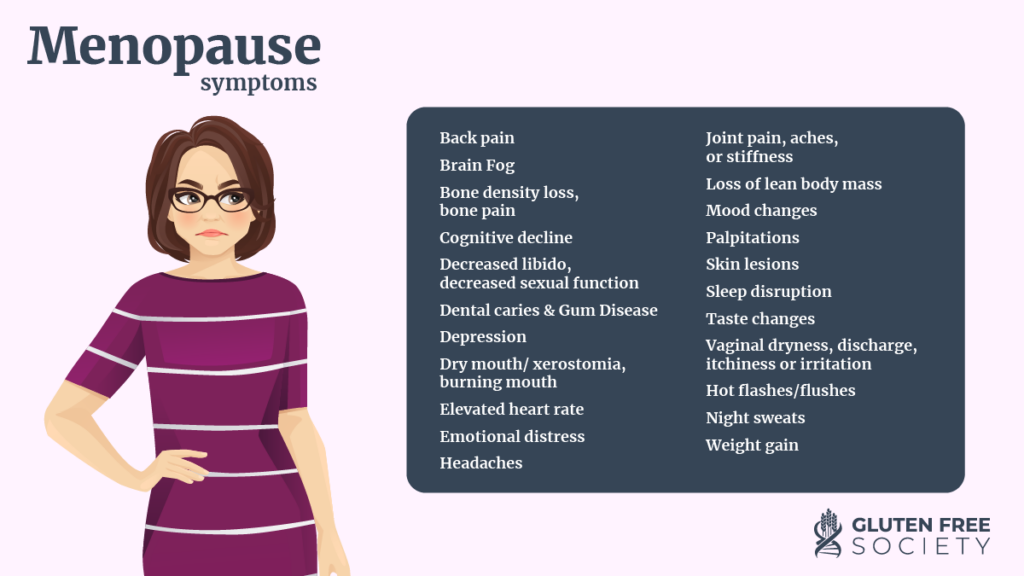 In addition, menopause can cause a number of biochemical symptoms with potentially more significant health implications, including dyslipidemia (a risk factor for coronary heart disease and stroke), glucose intolerance (a risk factor for diabetes), hyperinsulinemia (too much insulin in the blood), insulin resistance, inflammation, decreased hormones (estradiol and progesterone) and and increase in certain biochemical markers (triglycerides, FSH, leptin, proinflammatory markers)

There is a growing body of research on the impact that gluten and grains can have on menopause.  Gluten induced menopause abnormalities can be summarized in three main ways:

One study found that untreated women with celiac disease had a shorter duration of fertile lifespan than women without celiac disease. In addition, the scores for hot flashes, muscle/joint problems, and irritability were higher in untreated celiac women. However, the study found that a gluten-free diet that started at least 10 years before menopause prolonged the fertile life span of celiac women.

An extensive research review connected gluten consumption to a multitude of female reproductive issues.  The following is a quote from the conclusion of this review:

Why is early menopause is a problem?

The obvious is that early menopause shortens the amount of fertile years a woman has. 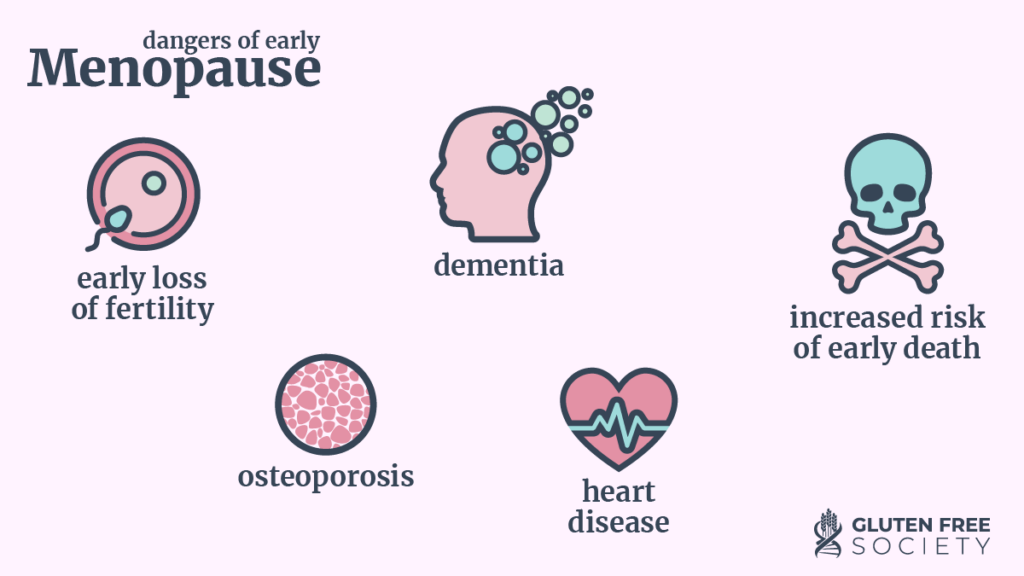 How gluten affects your hormones

Gluten can play a role in menopause symptoms as it can impact how your body produces hormones.  One of the major causes of gluten induced hormone disruption comes from nutritional deficiencies.  This is because hormones require vitamins and minerals to be properly synthesized. Those with gluten sensitivity often experience nutrient deficiencies because gluten can damage the small intestine causing impaired absorption of key nutrients. Furthermore, grain-based foods, such as bread, pasta, crackers, and sweets, are heavily processed and are devoid of adequate essential nutrients. Therefore, people who rely heavily on such foods are more susceptible to nutrient deficiencies.

In addition, gluten can impact hormones by acting as an endocrine disruptor. Studies suggest that gluten induced autoimmunity can impact multiple endocrine organs including the ovaries, uterus, thyroid, adrenals, and pancreas.

Grains are also heavily sprayed with herbicides like atrazine and glyphosate.  Glyphosate is a  known hormone disruptor in human cells. In addition, some pesticides used to grow grains can also have endocrine-disrupting effects. And studies have shown they can alter the synthesis or action of a wide range of hormones, including estrogen, testosterone, thyroid hormone, cortisol, progesterone, and prolactin.

Fortunately, there are a number of actions women can take that can help naturally minimize  uncomfortable menopause symptoms: 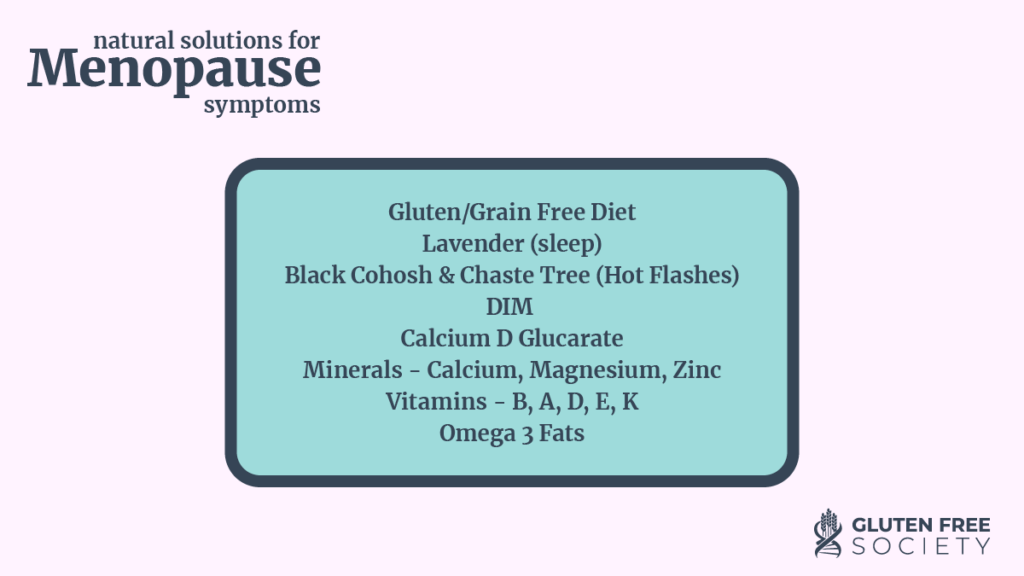 Supplements That May Be Beneficial in Supporting Menopause Symptoms

While pharmaceutical drugs may be encouraged by some, there are a number of herbal and nutritional supplements can be helpful in managing the symptoms of menopause. Research shows that many women in the menopausal life stage are deficient in several of these key nutrients, so supplementation may be wise. A number of these can be found in our Ultra Balance supplement.

Menopause is an inevitable part of aging, but there are steps that women can take to prevent its early onset and to support the body’s response to its hormonal shifts. A gluten free diet is one of these steps, and Gluten Free Society can support you along the way with evidence based information, healthy and delicious recipes, and more.