Is your IBS a gluten sensitivity?

Does a gluten free diet help with IBS? Can gluten cause IBS directly? Irritable bowel syndrome (IBS) is a widely diagnosed, often misunderstood condition. With an array of symptoms that mimic a variety of other gastrointestinal disorders and a diagnosis that can easily mask other underlying conditions, many people with IBS find themselves struggling to find answers and manage symptoms.

There are a number of factors and underlying causes and triggers that can contribute to IBS, and gluten is definitely one of them. But before discussing gluten’s role in IBS, let’s cover some basic information about irritable bowel that is important to understand. 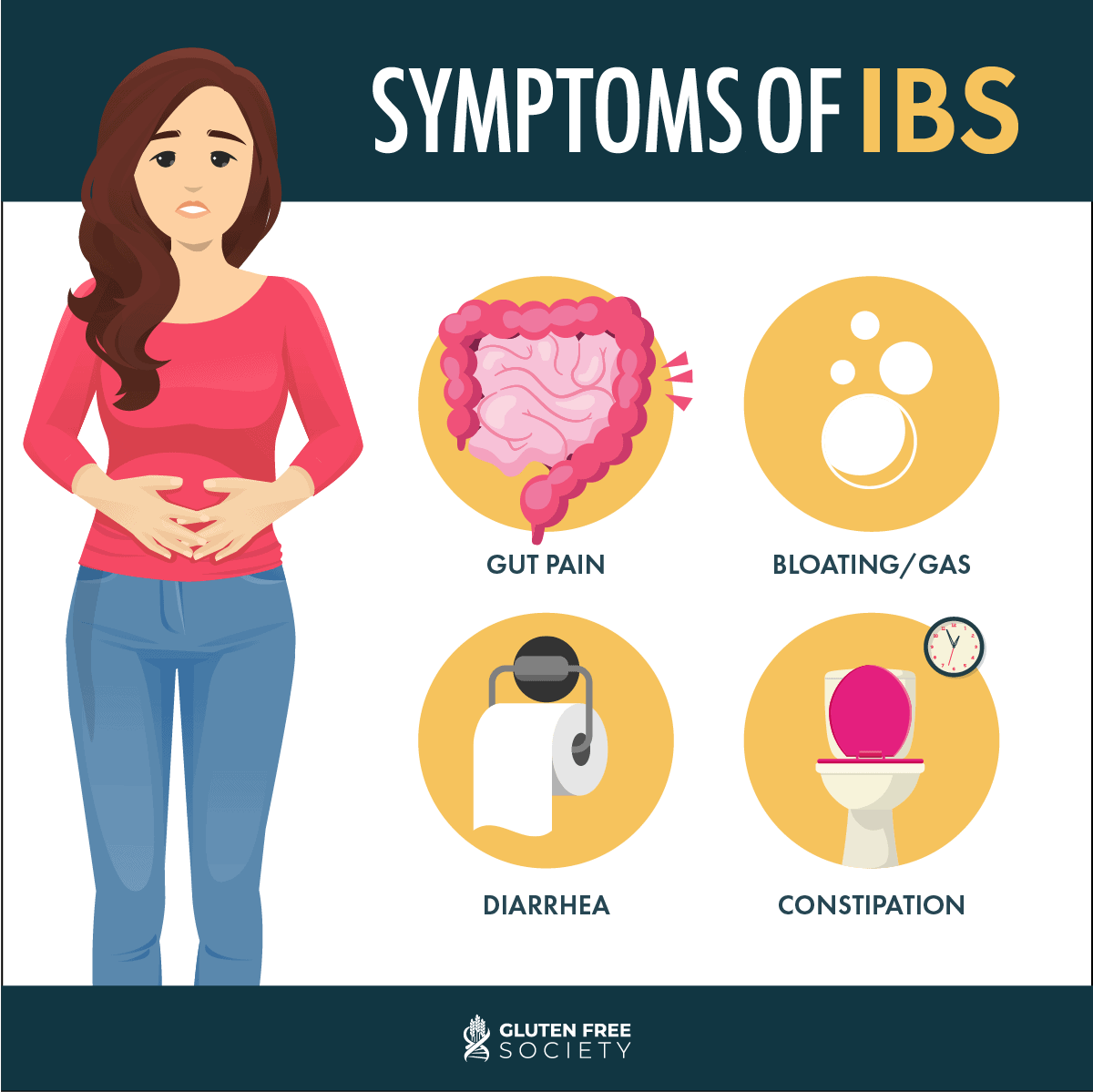 IBS symptoms include abdominal pain, discomfort, and changes in bowel habits. There are two types of IBS which result in two different sets of bowel challenges:

IBS is difficult to diagnose in that there is no specific test or diagnostic criteria. Rather, it is a “diagnosis of exclusion.” This means it is diagnosed when other conditions with structural or biochemical diagnostic criteria (such as inflammatory bowel disease or celiac disease) have been ruled out.

Irritable bowel syndrome is very common in industrialized countries, with a prevalence estimated between 3% and 28% of the population.

Irritable Bowel Syndrome, as the name would imply indicates that the bowel is irritated. The important questions to ask are:

This is where food comes in. What we eat matters, and as the old saying goes, “One man’s food is another man’s poison.” So it would be foolish to ignore food as a culprit to IBS. That’s where gluten comes in. 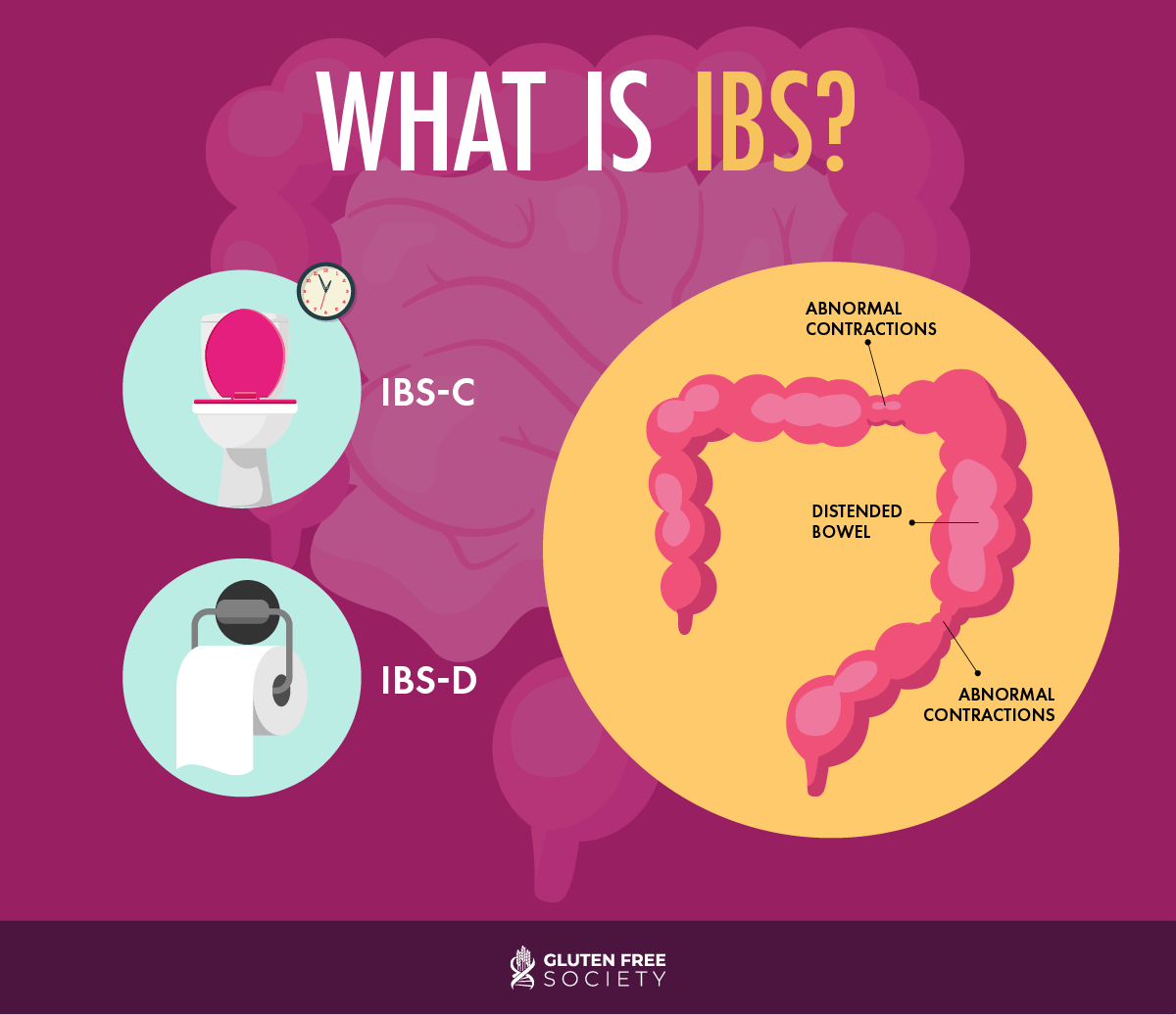 Gluten and IBS: What’s the Connection?

IBS and celiac disease can have very similar symptoms. This can make both diagnosis and treatment a challenge. However, research has indicated that there is more to this similarity of symptoms than a coincidence.

Many studies suggest that IBS patients are affected by undiagnosed food allergy or food intolerance. This relationship has been examined in a wide array of research and has been estimated at anywhere from 5–50% of all IBS cases. In fact, one study found a high prevalence of food allergies in patients with Irritable Bowel Disease (IBD). The mechanism of increased incidence of IBS in patients with food allergies is not fully understood, but increased intestinal permeability (also known as leaky gut) is often suggested.

Furthermore, research has noted that patients with undetected celiac disease may present with IBS symptoms. This has led to the recommendation by the American College of Gastroenterology Task force that patients presenting with diarrhea predominant IBS symptoms should be tested for celiac disease. In addition, as we know that the general public in the United States have increased adoption of a gluten-free diet far in excess of the known prevalence of celiac disease, it is believed that many individuals with gastrointestinal symptoms are deriving benefit from a gluten free diet even if they do not have celiac disease. 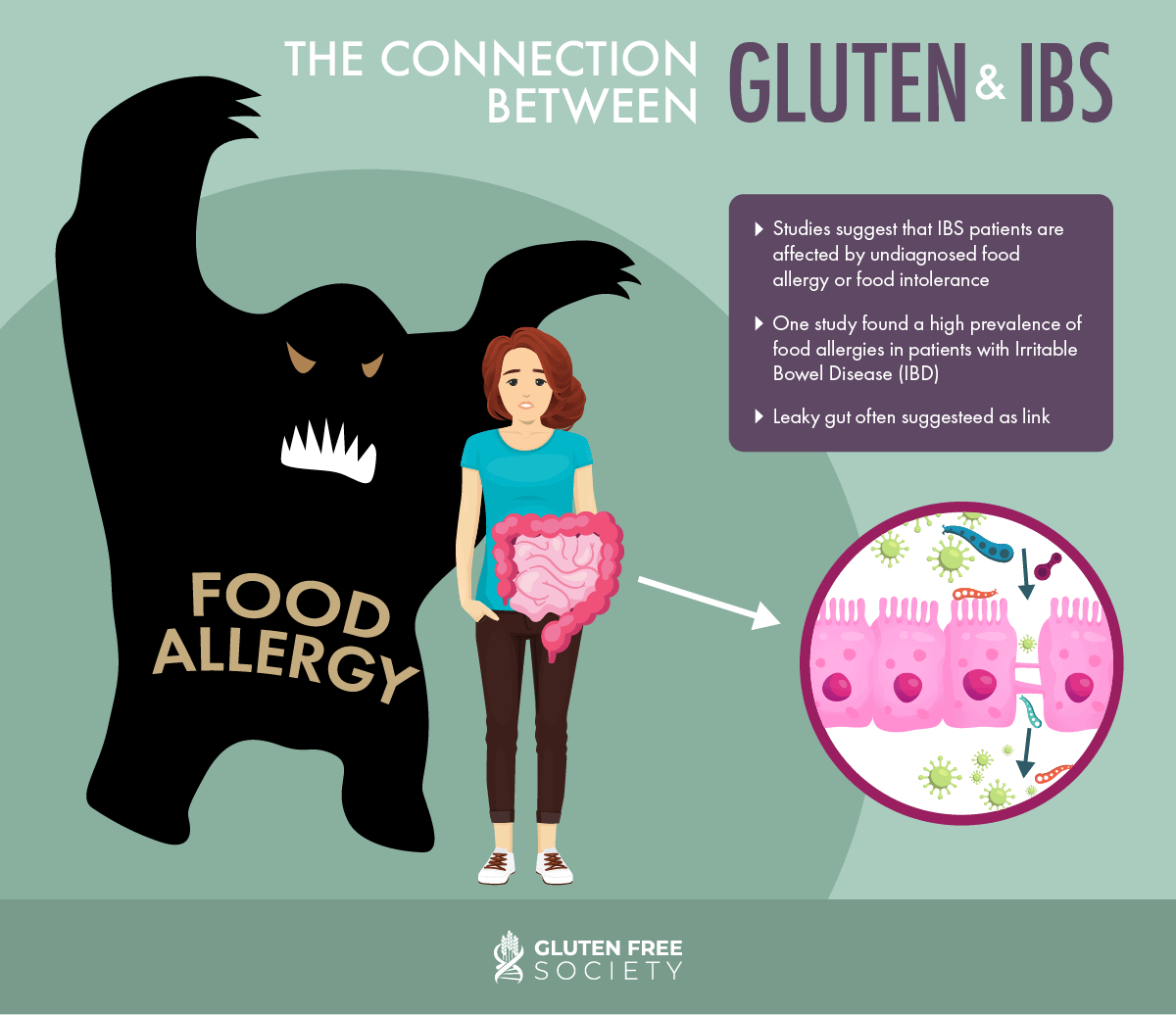 How Gluten Can Alter the Microbiome and Lead to IBS

Research has estimated that up to a third of patients with gastrointestinal disorders like IBS have symptoms of more than one condition, suggesting a common underlying root cause.

Most research focuses on the health of the gastrointestinal microbiome (the “gut”) as a whole as a primary driving factor behind these symptoms, diseases, and even potential treatments.

While researchers acknowledge that there is a complex interplay of several factors that seem to underlie the disordered physiological processes that cause, result from, and are otherwise associated with IBS, a growing body of evidence supports the role of the microbiome and innate immune system alterations.

One way in which the microbiome can be disrupted and thrown into a state of dysbiosis, or imbalance, is by the ingestion of gluten in those who cannot tolerate it. Research has shown that wheat gliadin can activate innate immune cells and contribute to the impairment of intestinal mucosa and the development of intestinal and/or systemic inflammation.

This imbalance can, in part, be addressed with a gluten-free diet. A study published in the Journal of Gastroenterology confirms a direct benefit of patients suffering with IBS after following a gluten free diet. It came to the following very promising conclusions: 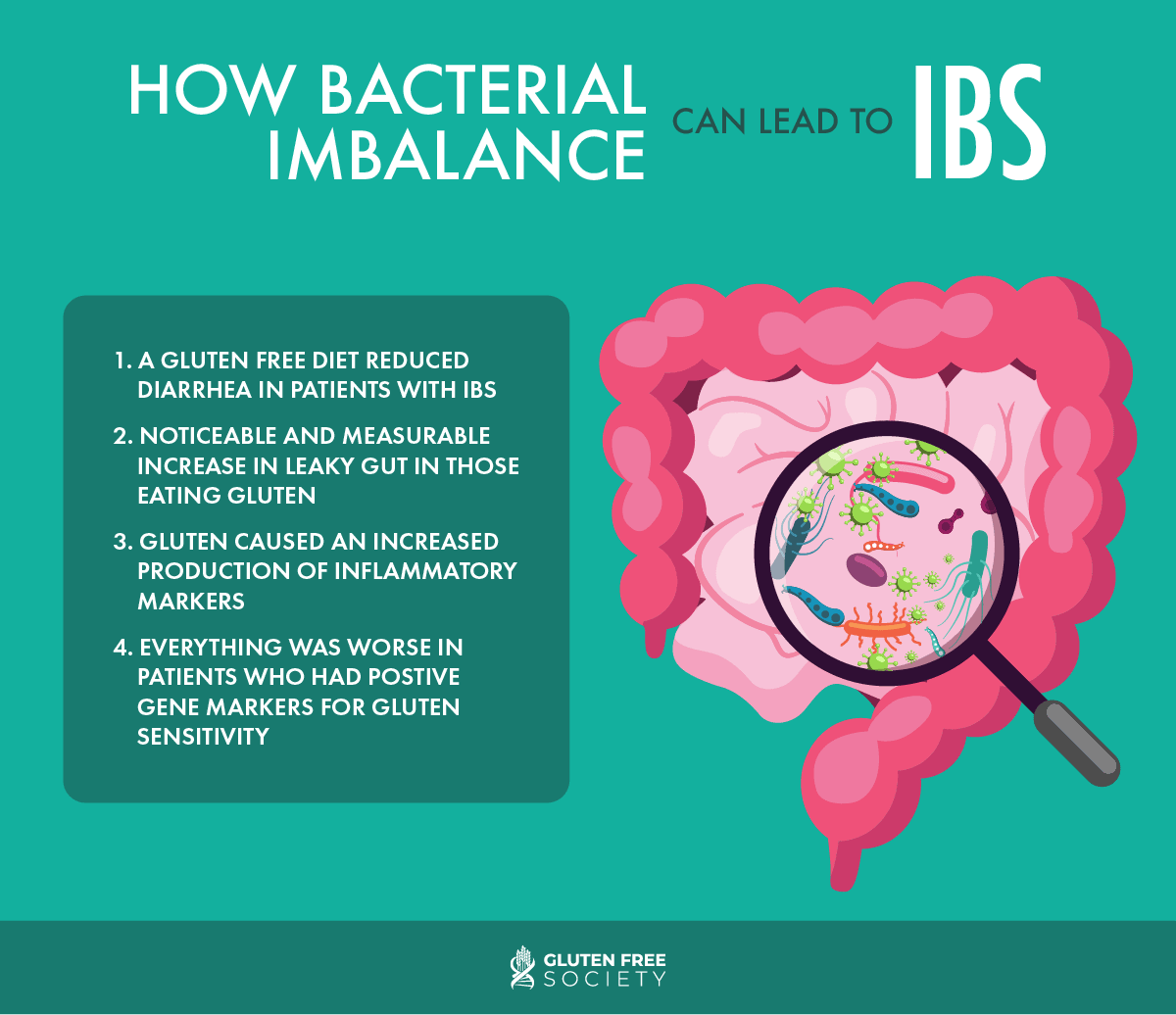 How Foods Beyond Gluten Can Also Be a Culprit

While eliminating gluten from the diet can help alleviate IBS symptoms, and potentially also address the root cause of digestive and bowel concerns, there are a number of other foods beyond gluten that can exacerbate IBS symptoms.

One study followed patients over a 12-week period on specific-food exclusion diets. Each patient was tested for specific immunoglobulin G (IgG) antibodies against 14 common food intolerances so that their diet could be tailored to exclude foods that their individual body reacted to. This process resulted in significant improvements in abdominal pain (bloating level and frequency), diarrhea frequency, abdominal distension, stool shape, general feelings of distress and total symptom score compared with baseline in patients with IBS.

Another study followed 150 patients with IBS who received either a diet excluding all foods to which they had raised IgG antibodies or a sham diet excluding the same number of foods but not those to which they had antibodies. The evaluation period lasted three months and patients were randomly selected to participate in one of the groups. After 12 weeks, the true diet resulted in a 10% greater reduction in symptom score than the sham diet, with this value increasing to 26% in patients who were fully compliant to their diet (i.e., those who did not “cheat” and eat some of their excluded foods). Relaxing the diet led to a 24% greater deterioration in symptoms in those on the true diet than those on the sham diet.

There is another category of foods that can be hard to digest by those with IBS are FODMAPs. FODMAPs include fermentable oligosaccharides, disaccharides, monosaccharides, and polyols. This category of short chain carbohydrates are poorly absorbed in the small intestine and can be very hard to break down, resulting in many of the common symptoms of IBS. Research has shown that short term restriction of high FODMAP foods can support symptom relief in IBS patients, particularly as it relates to wheat and dairy.

Unlike the elimination of gluten to alleviate symptoms of IBS and celiac disease, long term restriction of all FODMAPs is not recommended. Long term limitation of all FODMAPS can severely reduce the amount and diversity of beneficial nutrients and fiber found in many otherwise healthy high FODMAP foods like cruciferous vegetables and avocados that help feed and seed the gut. Diversity of the microbiome is critical to gut health, and gut health is a key component of resolving symptoms and causes of both IBS and celiac disease.

The connections between IBS, gluten sensitivity, and celiac disease are well established in research, and should not be ignored.

If you’re experiencing symptoms of IBS, avoiding gluten alongside other potential food triggers and intolerances can help alleviate symptoms and help remedy the root cause of your concerns.

One thought on “Is your IBS a gluten sensitivity?”