Gluten Sensitivity and Iron Deficiency Anemia – Are They Related?

Iron deficiency is one of the most common nutritional deficits found in patients with celiac disease and non celiac gluten sensitivity. The most common symptom linked to iron deficiency is unwavering fatigue. Patients will often report severe loss of energy even when sleep has been adequate. This energy deprivation can also contribute to severe brain fog and mental clarity issues. Iron deficiency can often times be confused with low thyroid or hypothyroidism.

Iron loss can contribute to a multitude of health problems – not just fatigue. Some of the most common side effects of iron deficiency include:

The following research study published in the Turkish Journal of Gastroenterology discusses how iron deficiency can be the first symptom associated with celiac disease. The results of the research led to the recommendation of ruling out gluten sensitivity in all patients with iron deficiency anemia. The study additionally recommends this screening in patients who supplement with iron, but still have persistently low levels (refractory iron deficiency).

Bottom line: if you suffer with any of the symptoms listed below for unknown reasons. You should have your doctor do two things –

What You Should Know About Gluten and Iron

Gluten sensitivity and iron deficiency are commonly found together. Gluten can contribute to

iron deficiency in several ways. Malabsorption of iron is often a consequence of damage to the small intestine (villous atrophy). Additionally, gluten can damage the acid producing cells of the stomach. Since acid is a necessary component for iron absorption, this commonly leads to anemia even in the absence of villous atrophy identification. 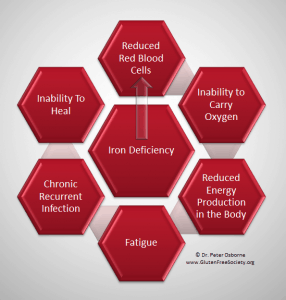 Iron is an essential element in the formation of lactoferrin, a protein used by the immune system to help fight gastrointestinal infections. This includes viral, bacterial, fungal, and parasitic infections. This is critical because in the presence of persistent GI infection, leaky gut syndrome is allowed to perpetuate regardless of a gluten free diet change. Additionally, the protein lactoferrin aids in both growth and in some studies has shown cancer protective qualities.

Do you have a story about gluten sensitivity and iron deficiency? Don’t be shy and chime in below in the comments section.

Always looking out for you,
Dr. Osborne – The Gluten Free Warrior

30 thoughts on “Gluten Sensitivity and Iron Deficiency Anemia – Are They Related?”