Does Gluten Cause Selenium Deficiency 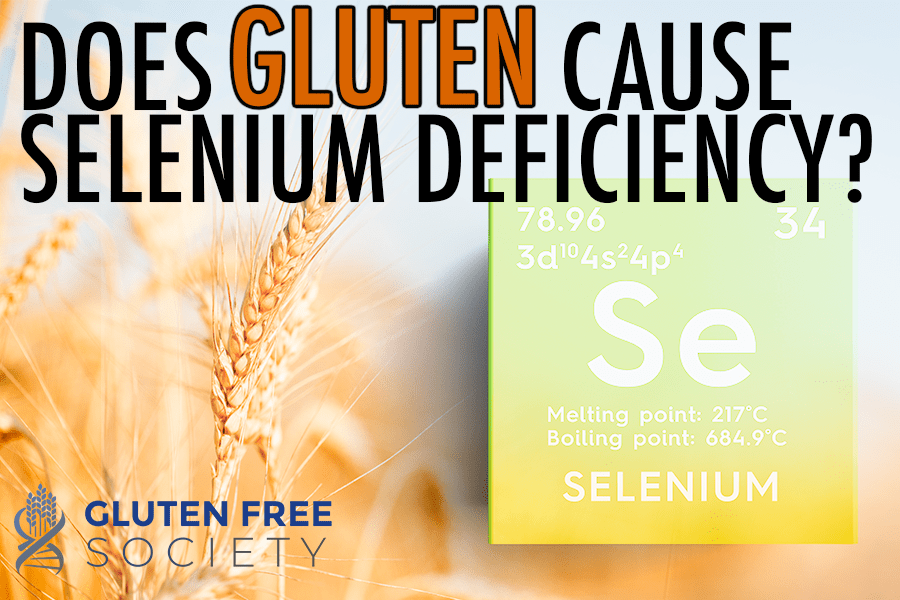 Does gluten cause selenium deficiency? Should those with a celiac diagnosis be concerned with supplementing selenium in their diet? The simple answer is yes, but before we dive into the connection between gluten sensitivity and selenium deficiency, let’s take a look at why selenium is such an important and essential trace mineral necessary for the health and well being of your body.

Selenium is a key player in your body’s antioxidant defense system, which protects your body from inflammation and cellular damage that would otherwise lead to dysfunction and disease.

Your immune system also benefits from selenium. Its role as an antioxidant helps protect your immune system. In cancer research, selenium has been shown to have immune-enhancing effects. It’s also been shown to help prevent harmless virus infections from becoming harmful. For example, evidence shows it may help prevent HIV from progressing to AIDS.

Selenium is also involved in cell growth, repair, and death. Plus, testosterone production and healthy sperm development rely on selenium.

Selenium is a trace mineral. It’s only needed in small amounts. And even though selenium is abundantly found in our environment, deficiencies are a problem these days. It may be that our soil contains less selenium than it used to due to factory farming practices. But it’s also because our Western diet is highly processed and lacks many essential nutrients.

Selenium deficiencies are also associated with serious degenerative diseases. And in many cases, evidence points to a loss of antioxidant activity.

For example, selenium-containing antioxidant enzymes prevent the oxidation of fats in your body, which helps prevent inflammation and the build-up of plaques in your arteries. Thus, evidence suggests a selenium deficiency could lead to heart disease.

Other diseases associated with a selenium deficiency include: 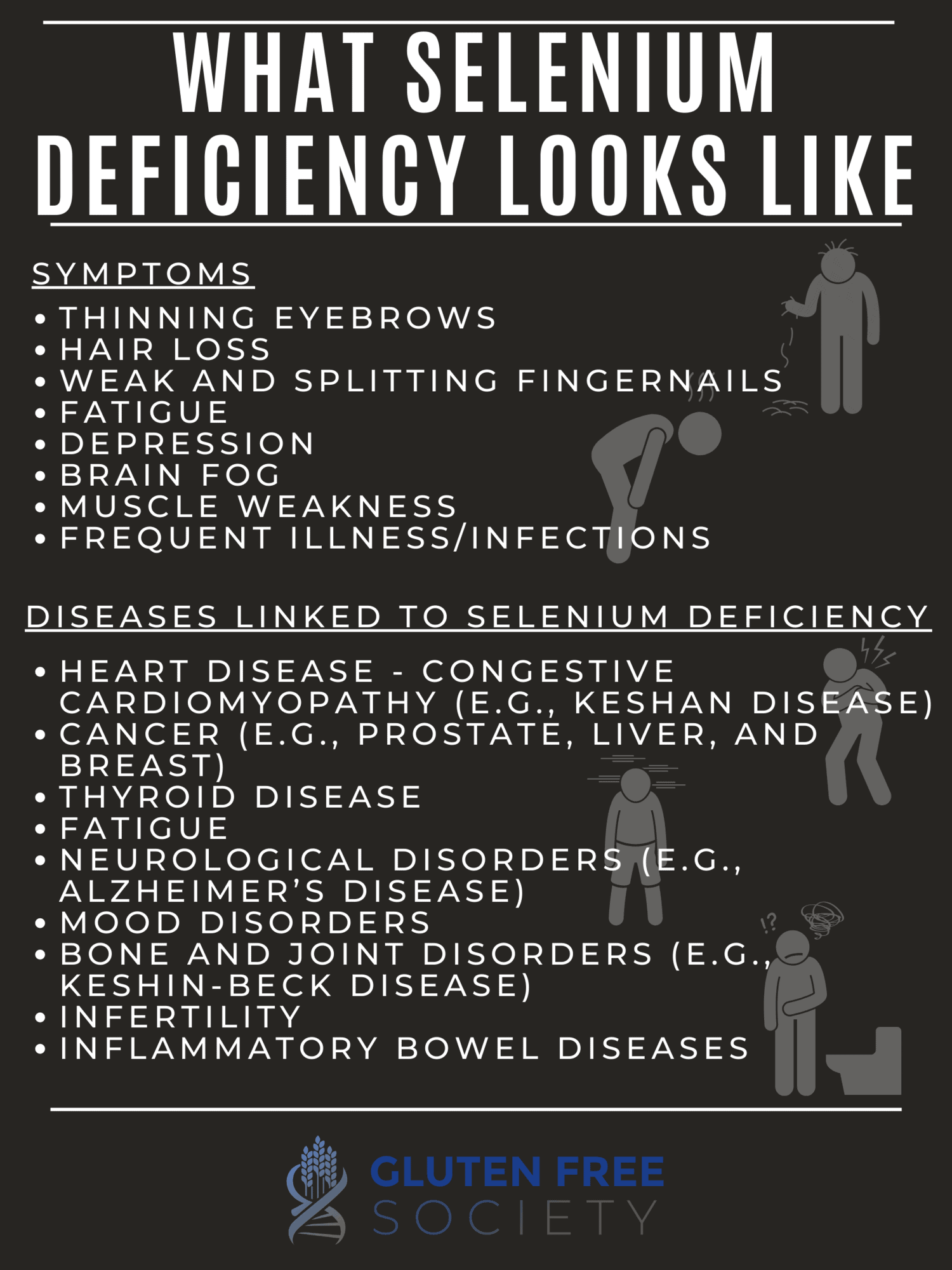 How Gluten Contributes to Selenium Deficiency

Anything that interferes with your body’s ability to digest and absorb selenium will increase your risk of a deficiency. And that’s exactly what gluten does for those with gluten sensitivity. It irritates and inflames the lining of your small intestine, which is responsible for digestion and nutrient absorption. Thus, selenium deficiency is common among those with celiac disease.

An untreated case of gluten sensitivity is also a form of physical stress, which may increase your body’s demand for selenium.

In this study, concentrations of selenium were significantly lower in patients with celiac disease than those without. Even when following a gluten-free diet.

Thyroid disease is also strongly associated with celiac disease. This meta-analysis found that the prevalence of thyroid disease is more than 3 times higher among those with celiac disease than those without. And evidence suggests a selenium deficiency may be involved in some cases. Because it affects thyroid hormone activity and weakens your defenses against thyroid tissue damage.

So it’s not surprising that a gluten-free diet has been shown to be an effective adjunctive treatment for those with autoimmune thyroid disease, such as Hashimoto’s. 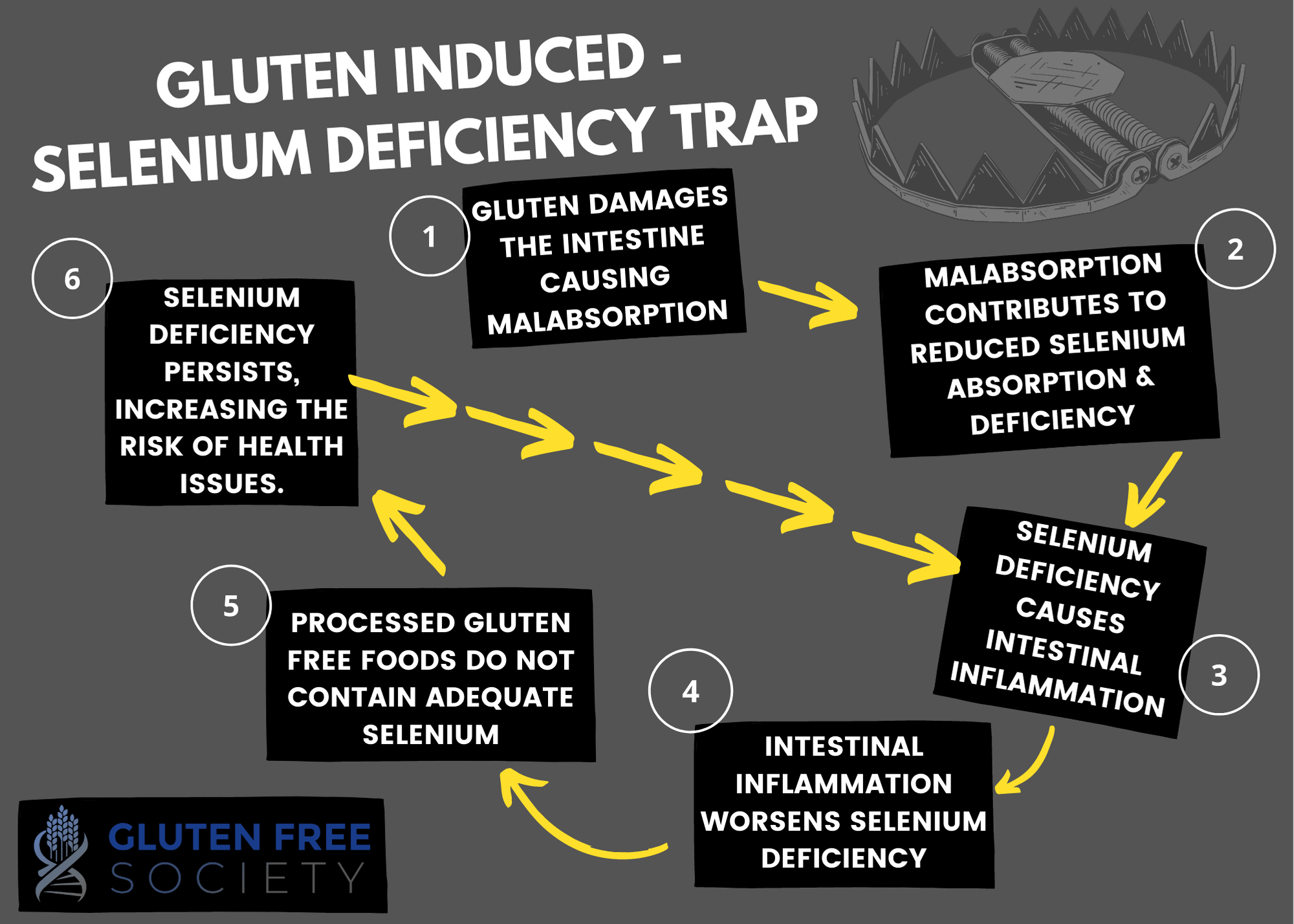 Should Those With Celiac Disease Supplement With Selenium?

To answer this question, it is important to get with your doctor or health care provider to have your selenium levels tested. Supplementation may be necessary to break the Gluten-Selenium Deficiency Trap. Generally speaking, 200-400 mcg of selenium/day is safe for adults, but it is always recommended to work with your health provider to monitor your levels if you are supplementing for long periods of time. The symptoms of too much selenium are:

Selenium isn’t hard to get from food. And some foods, such as Brazil nuts, are packed with selenium. In fact, one brazil nut contains more than 100% of the recommended daily intake. However, your body doesn’t absorb all of it.

Other great choices include:

Don’t worry about overdoing it with food (unless you’re eating an abundance of Brazil nuts every day). But I do caution when supplementing. I always recommend working with a licensed healthcare professional to test your selenium levels and determine an appropriate dosage. Because too much selenium isn’t good either.

However, if you trade-in your gluten-free processed foods for naturally gluten-free whole foods, like the ones I’ve listed above, you’ll get plenty of selenium.

So if you’re interested in adding more selenium to your diet, below are a few delicious gluten-free recipes to get started with:

Can gluten cause selenium deficiency? Most definitely. Those with gluten sensitivity and celiac disease definitely need to be aware that gluten induced damage can lead to nutritional deficiencies. Selenium plays multiple essential roles in human health. Make sure you ask your doctor to check your nutritional status on a regular basis to ensure you are getting enough selenium.

7 thoughts on “Does Gluten Cause Selenium Deficiency”