Vitamin B6 & Depression – Linked to Gluten?

Key Roles of Vitamin B6

Let’s start with energy metabolism. Vitamin B6 helps break down glycogen (stored energy) and turn it into glucose in the absence of food. It also helps convert amino acids (smallest unit of protein) into keto acids, which can then be used to make glucose from protein and fat in the absence of carbohydrates. Thus, vitamin B6 helps ensure your tissues have a steady source of fuel to make energy.

Vitamin B6 assists an enzyme involved in the making of sphingomyelin, which is an essential component of cellular membranes. It helps regulate a process called endocytosis, which is one way your cells obtain nutrients as well as destroy pathogens. Sphingomyelin helps send signals within the cell and ensures proteins are delivered to the correct place. It’s also believed to be involved in the regulation of functions performed in the cell nucleus, which is where your DNA is stored.

Enzymes that help convert proteins into hormones and neurotransmitters rely on vitamin B6. For example, vitamin B6 dependent enzymes convert 3,4-dihydroxyphenylalanine into dopamine (pleasure), tryptophan into serotonin (feel good), and glutamic acid into GABA (calm). This means vitamin B6 plays an important role in your emotional and mental well-being. So it’s not surprising that vitamin B6 deficiencies have been associated with depression. Vitamin B6 supplementation has also been shown to help reduce emotional symptoms associated with PMS (premenstrual syndrome), including moodiness and irritability.

Vitamin B6 helps activate the vitamin folate. Activated folate is used to make purines needed for DNA synthesis and methionine for protein synthesis. Methionine also forms S-adenosylmethionine (SAMe), which is involved in the production and regulation of hormones and neurotransmitters. It also helps keep your cell membranes healthy.

The production of heme relies on vitamin B6. Heme is necessary to make hemoglobin, which is what binds oxygen and carries it throughout your body. Without it, your cells can’t get the oxygen they need and eventually start to malfunction. Thus, vitamin B6 helps prevent anemia.

Vitamin B6 also helps prevent the build-up of homocysteine, which has been associated with inflammation, cardiovascular disease, neurological disorders, and cancer. In this study, celiac patients supplementing with B vitamins had lower homocysteine levels than those not taking supplements.

Evidence suggests vitamin B6 also plays a role in your body’s antioxidant defense system, which protects your cells from damage.

Vitamin B6 impacts your immune system through the production of immune signaling molecules (e.g., interleukin-2). And finally, vitamin B6 is required for healthy brain development.

Vitamin B6 Deficiency and Gluten

Based on the many roles vitamin B6 plays in your body, it’s clear to see that a deficiency can have serious consequences. So it’s important to make sure you’re eating vitamin B6-rich foods. But it’s also important to make sure your gut is healthy and functioning optimally so you can actually digest your food and absorb the nutrients it contains. And that’s where gluten gets in the way.

How can Gluten be a cause for Vitamin B6 deficiencies? Gluten irritates and inflames the intestinal lining of those with gluten-sensitivity. Plus, it causes diarrhea. As a result, digestion is hindered and nutrients aren’t absorbed.

Gluten also disrupts the balance of gut bacteria. This is relevant because some gut bacteria are capable of producing vitamin B6. In addition, it’s worth noting that gluten-laden processed foods are not a good source of vitamin B6. Grains may contain vitamin B6, but much is lost during the milling process.

So if you suffer from gluten sensitivity or suspect you might, evidence suggests your risk of vitamin B6 deficiency is higher than normal.

I mentioned above how a vitamin B6 deficiency is associated with depression. Well, depression is common in those with celiac disease. In this study, 12 celiac patients with depression were treated with vitamin B6. After 6 months, the severity of their condition dropped without making any other changes.

Vitamin B6 deficiency symptoms to look out for include:

Conditions associated with vitamin B6 deficiency include: 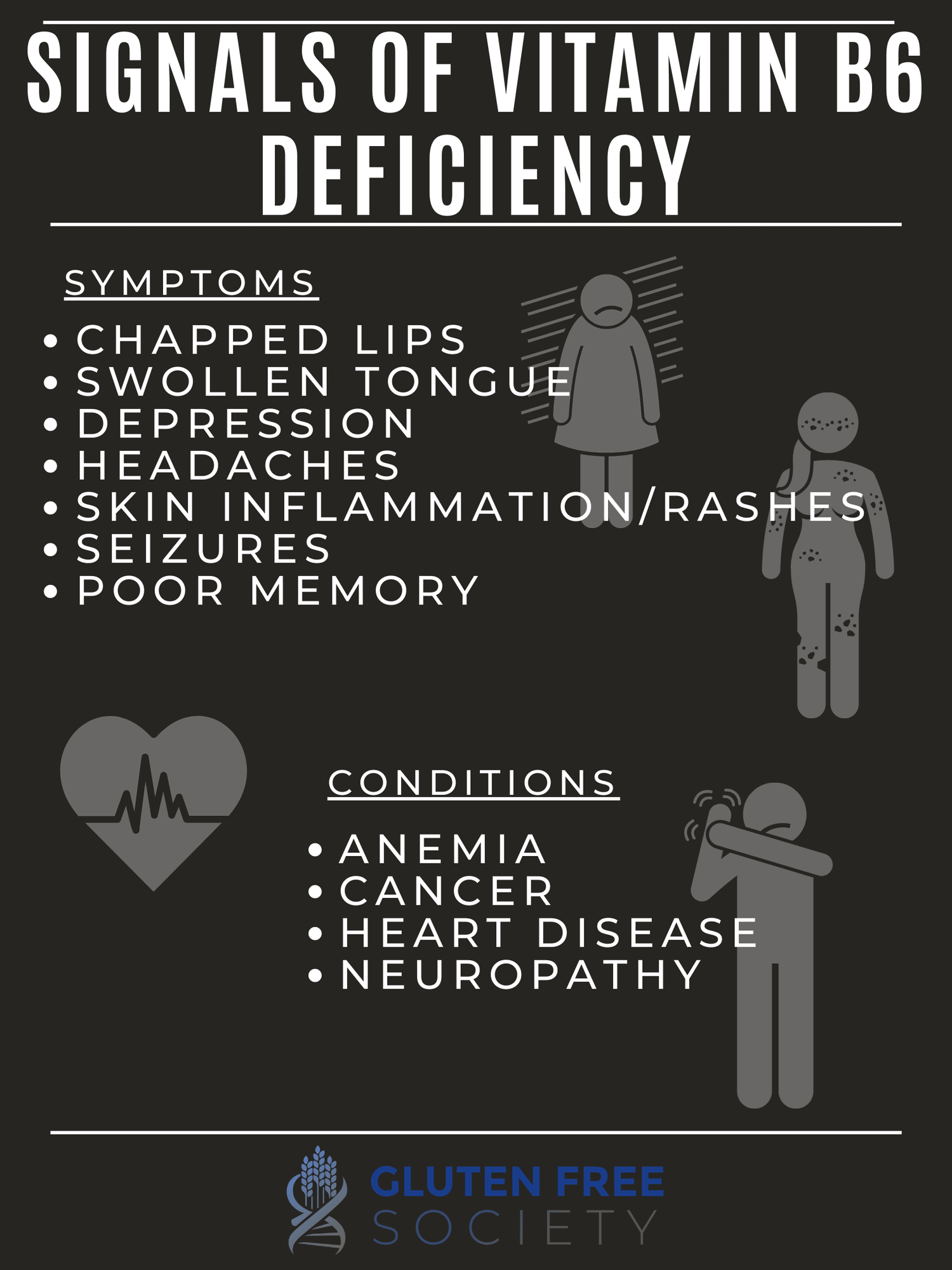 Best Food Sources of Vitamin B6

Your body can’t store vitamin B6. This means you must eat foods containing vitamin B6 daily for optimal health.

Below are some excellent whole food sources of vitamin B6:

Finally, though you can not overdo your intake of vitamin B6 with food, there are reports of toxicity with high dose supplementation. So please consult with a licensed healthcare provider before supplementing.

Want to know which of our supplements contain vitamin B6? Click on the links to learn more.

Now it’s your turn…Has gluten impacted your Vitamin B levels? is vitamin B6 on your radar? Which vitamin B6 foods are you eating?

7 thoughts on “Vitamin B6 & Depression – Linked to Gluten?”