Anemia and Low Platelets – Is Gluten Sensitivity a Cause?

Gluten – A Common Cause of Many Types of Anemia

Iron deficiency anemia is a well known disease manifestation in those with gluten intolerance issues. The following research study also points out that gluten can cause platelet anemias as well.

The number of patients in whom extraintestinal symptoms reflect the initial manifestation is rising. Common symptoms are changes in blood counts, which can arise from changes in all cell lineages. Among these, iron deficiency anemia is very common, but also thrombocytosis and thrombocytopenia have been reported to manifest themselves within the framework of celiac disease.

I commonly see patients with abnormal blood cell counts (red blood cells, white blood cells, and platelets) and anemias. Often times further investigation reveals that these individuals are gluten sensitive. It is refreshing to see that researchers are recommending the investigation of gluten sensitivity in all patients presenting with gastrointestinal symptoms and blood cell count abnormalities. I would go one step further and recommend genetic screening for all patients with anemia regardless of whether or not they are having intestinal symptoms.

There are many forms of anemia. Iron deficiency is just one of them. The following is a list of some common nutrient deficiency anemias:

In my clinic, I see vitamin B-12 deficiency anemia more than any other type.

Gluten and Vitamin B-12 Part of the Anemia Puzzle

Gluten causes B-12 malabsorption. Vitamin B-12 deficiency. The gluten free diet is not always enough to correct this deficiency because gluten can damage the stomach’s ability to produce the acid necessary to absorb vitamin B12. Vitamin B-12 is responsible for helping your body produce red blood cells, white blood cells, and platelets. So you might want to get your vitamin levels checked as well. The diagram below shows some of the consequences of a B-12 deficiency. It is important to point out that a lot of the symptoms caused by gluten sensitivity are similar to this vitamin deficiency. 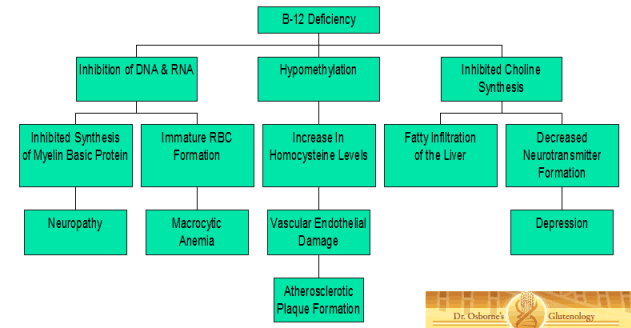 6 thoughts on “Anemia and Low Platelets – Is Gluten Sensitivity a Cause?”