We’ve all gotten the memo that fat is back, but we know that not all fat is created equal. You’ve probably heard of so-called “good fats” and “bad fats” – but what about omega fats? Are they good or bad for those with gluten issues?

Below we will discuss all things omegas, including:

What are Omega Fats?

The term omega fatty acids refers to a group of three type of fats:

Omega-3 and omega-6 fatty acids are considered essential polyunsaturated fats. What does that mean? Let’s break it down: 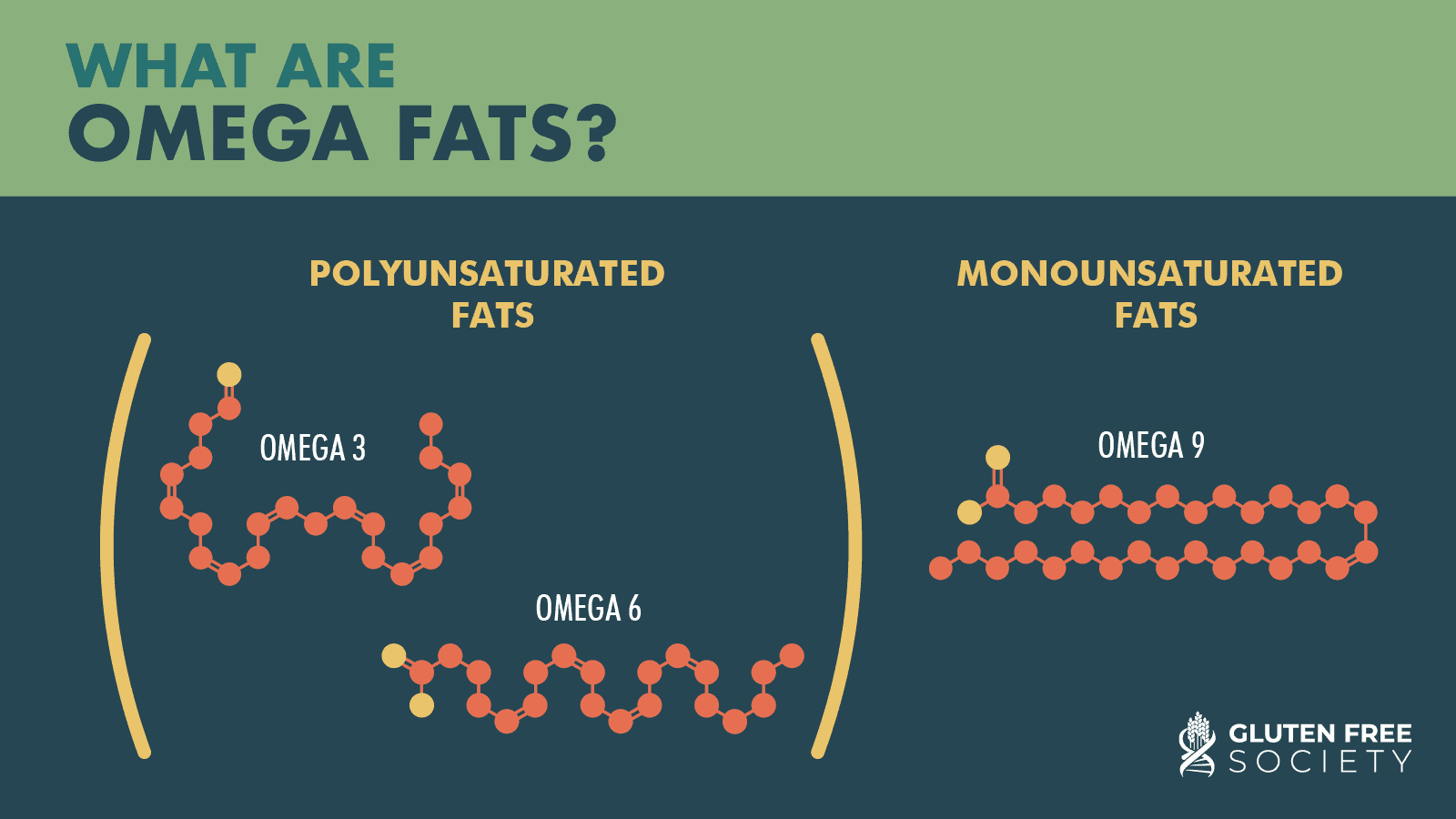 Types of Omega Fats (and why they matter)

Let’s take a closer look at each of the omega fatty acids – what they are and why you want to consume them in a deliberate ratio.

Omega-3s are named as such because the final double bond in the chemical structure is three carbon atoms from the “omega,” or tail end of the molecular chain. There are many types of omega-3 fats, but EPA, DHA, and ALA are the three most common: 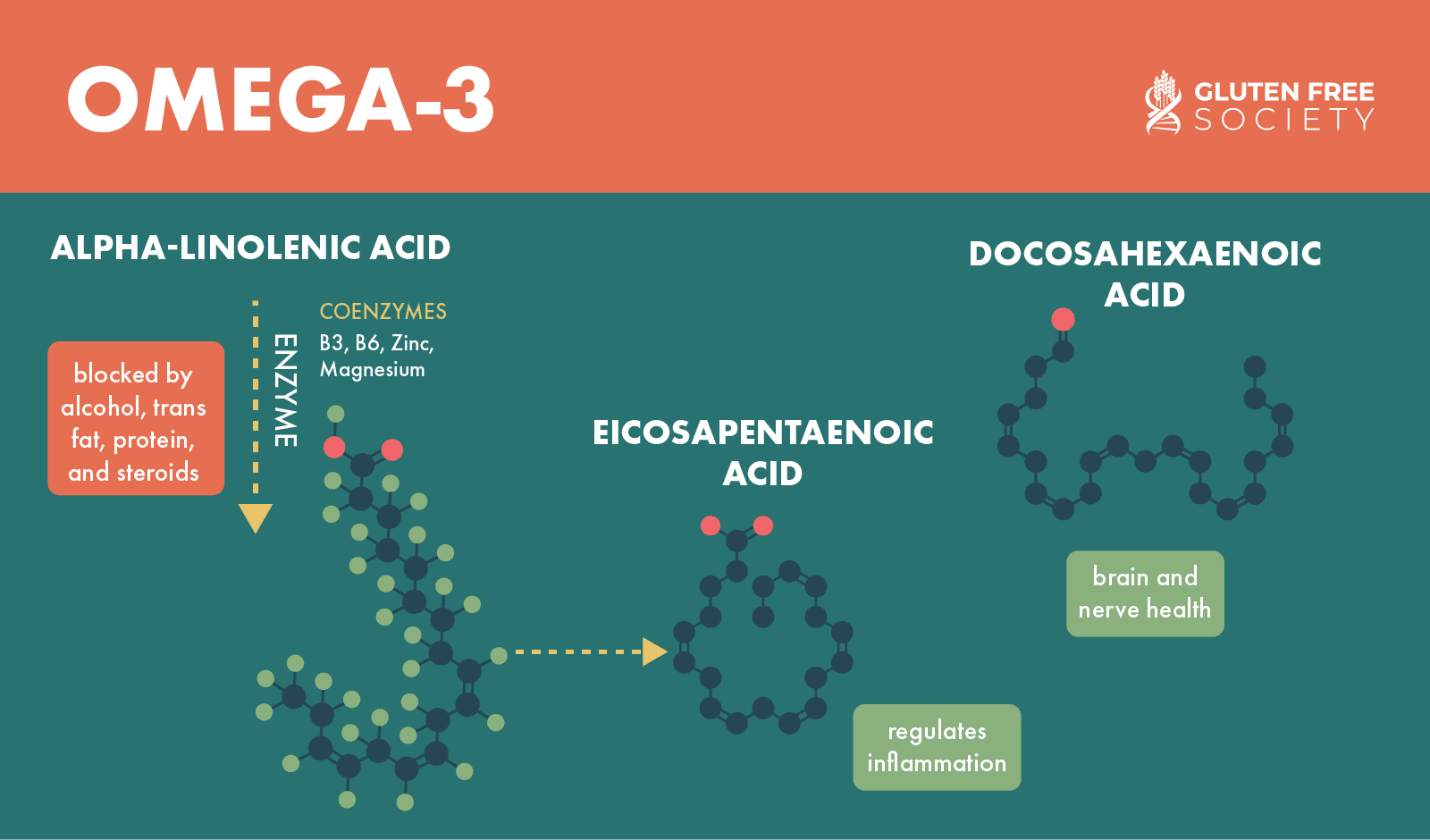 Omega-6s are similar in structure to omega-3s, however, in this case, the last double bond is six carbons from the omega end of the fatty acid molecule. While it seems like a small difference, it actually translates into some very different implications on your health.

Omega-6s are more inflammatory than omega-3s. While some level of inflammatory response in the body is needed (like for fighting an acute infection or illness), too much can increase the risk of inflammatory disease.  There are two primary types of omega-6 fats: 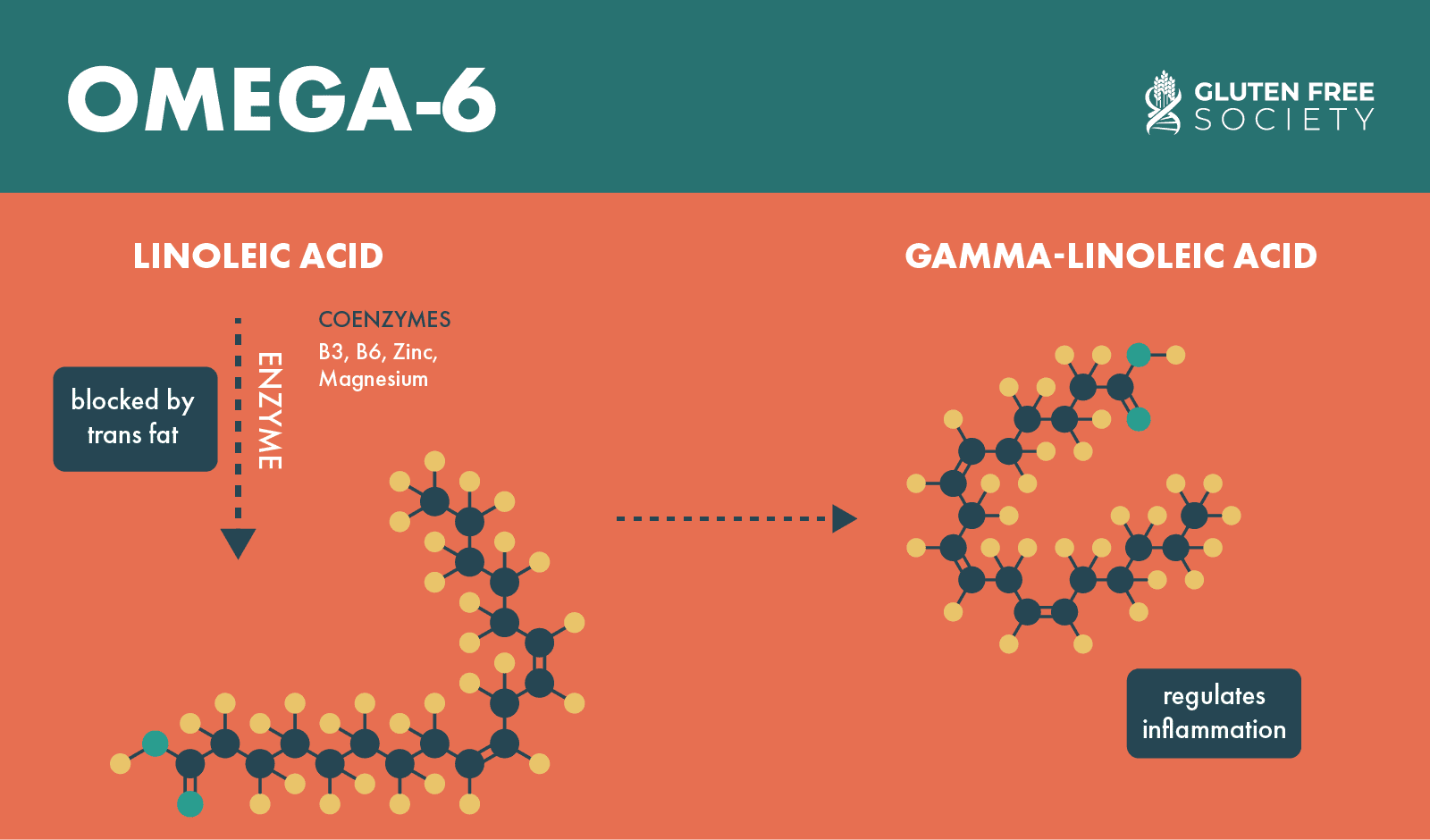 Omega-9s are monounsaturated fats with one double bond that is located nine carbons from the omega end of the fatty acid molecule. Omega-9 fatty acids aren’t strictly “essential,” as the body can produce them, so they aren’t as important to get from the diet.

Striking a Balance Between Omegas

While all omegas serve important functions in the body, it is important to strike the right balance in your consumption of each. An imbalance in your diet may contribute to a number of chronic diseases, including cardiovascular disease, type 2 diabetes, obesity, metabolic syndrome irritable bowel syndrome and inflammatory bowel disease, macular degeneration, rheumatoid arthritis, asthma, cancer, psychiatric disorders, and autoimmune diseases. Here’s why:

What is the Optimal Omega Ratio?

So, if it is important to keep the ratio of omega 3 to omega-6 in balance, what is the optimal ratio? Well, if we look to our ancestors to see how they ate based on the availability of food (and the lack of processed and industrialized food), we see that consumption of the two types of fatty acids was fairly even. Anthropological researchers who have studied diets throughout history found that diets were rich in seafood and other sources of omega-3 long chain fatty acids EPA and DHA and relatively low in omega-6s, as the only available sources were things like nuts and seeds. This research suggests that our hunter-gatherer ancestors consumed omega-6 and omega-3 fats in a ratio of roughly 1:1.

So how does this historic ratio of 1:1 compare to what the average American consumes today? Unsurprisingly, there has been a massive shift. Research suggests that the typical diet today results in an omega 6:3 ratio that averages about 16:1.

But don’t think you need to completely overhaul your diet. There isn’t any research that suggests that a 1:1 ratio is optimal. Instead, most experts agree that a ratio of 4:1 is an ideal target for the general population of adults and children. Even lower ratios of 2:1 or 3:1 have been shown to provide added benefit in the case of certain conditions like cancer, rheumatoid arthritis, and asthma. 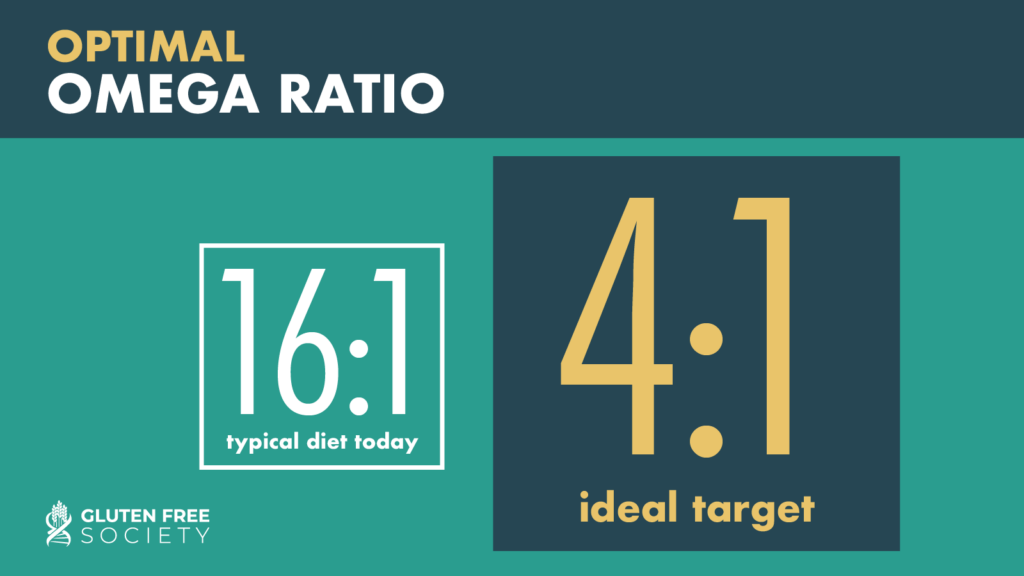 All of the omega fatty acids serve key functions in the body:

You probably get some routine lab work done by your healthcare practitioner, but Omega-3 isn’t often one of them. So how do you know if you’re deficient? Well, while there is not a standard test to diagnose an omega-3 deficiency, there are ways to analyze omega-3 levels. A simple option blood sample can check omega-3 levels in the blood fats or blood plasma. However,  the amount of fatty acids in the blood can vary significantly depending on what you ate last and when, so this option isn’t entirely reliable. Alternatively, omega-3 status can be measured indirectly by analyzing the fatty acid composition of red blood cells. This approach is a bit more involved, as it looks at the long-term dietary intake of fats over several months. If testing isn’t available to you, try taking a look at your diet over a month. If you don’t consume sources of omega-3s like salmon at least twice per week, or take a supplement that contains EPA and DHA daily, chances are you are deficient. You can also keep an eye out for the symptoms of deficiency listed below: 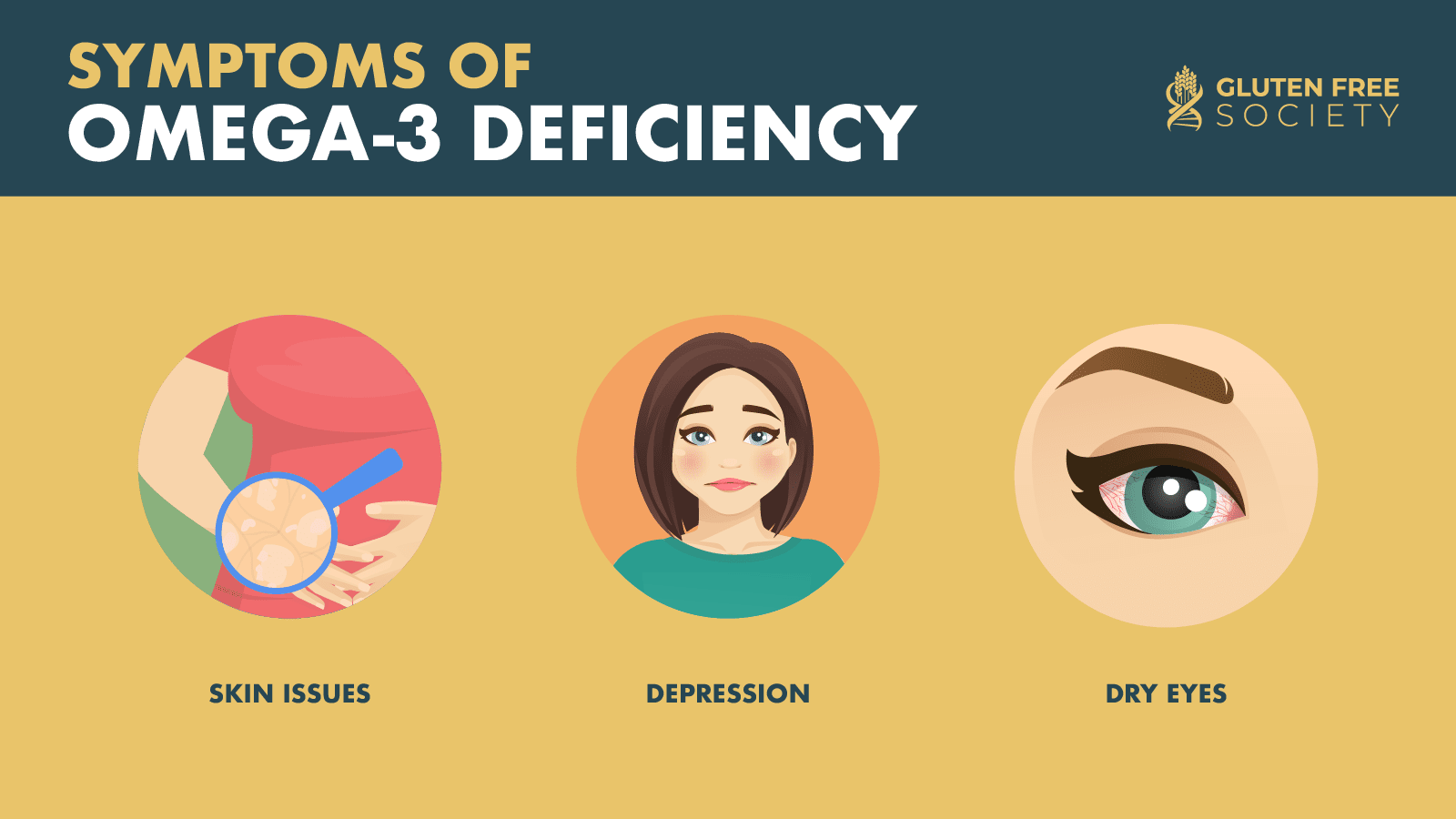 As celiac disease impacts the ability of the small intestine to absorb nutrients, those with undiagnosed or recently diagnosed celiac disease commonly experience nutrient deficiencies. Research has identified the most common deficiencies as calcium, iron, fiber, folate, omega-3, vitamin B12, and vitamin D. In fact we have discussed many of these deficiencies and more (like fat, vitamin E and potassium) on our blog in the past.  In fact, one study found that levels of DHA were decreased in subjects with active celiac disease. In addition, while serum levels of these fatty acids increased during remission, they still remained significantly lower than the levels in control subjects without celiac disease.

Omega fatty acids are found in a number of foods as listed below. However, since the aim is to keep your omega-3 to omega-6 ratio low (and since your body can produce its own omega-9), your focus should be on consumption of omega-3s.

Many foods that contain omega-6 are beneficial for a number of other reasons, like their healthy fats and micronutrients. Others, like industrial seed oils, are detrimental to your health for other reasons. While omega-6s overall are more inflammatory than omega-3s, they don’t need to be strictly avoided, rather just balanced out with omega-3s. That said, I strongly recommend that you get your omega-6s from whole, healthy unprocessed foods like nuts and seeds, not processed industrial seed oils. 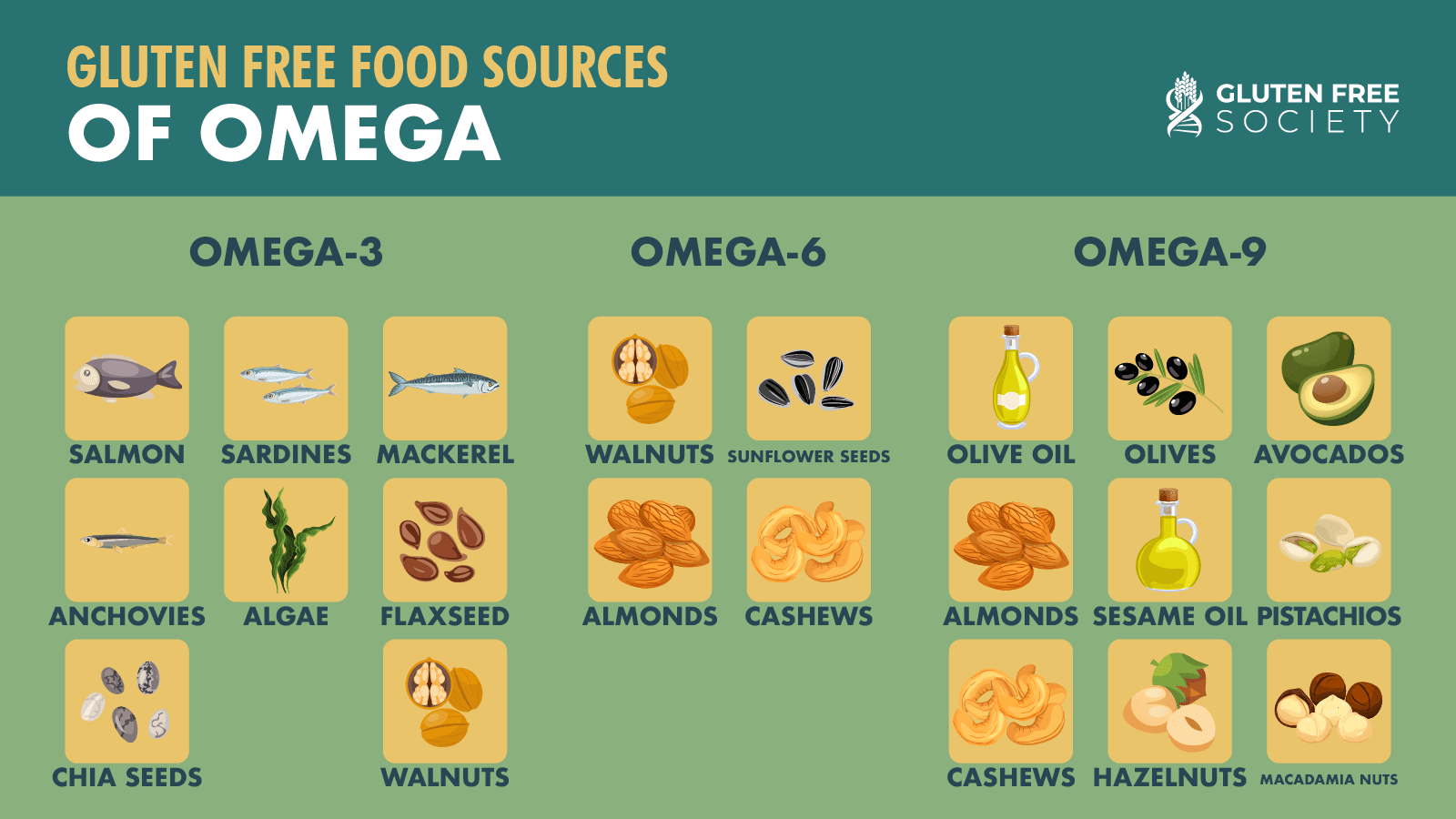 When it comes to omega-3 supplementation, it’s important to seek out a reputable brand with trusted sourcing and testing.

Omega-3 Max capsules and liquid are molecularly distilled, high-concentration fish oils sourced from the cold, fresh waters off the Chilean coast. These waters provide the cleanest, most sustainable source of fish in the world. This product includes 1.3 g of eicosapentaenoic acid (EPA), 850 mg of docosahexaenoic acid (DHA) and 175 mg of docosapentaenoic acid (DPA) per serving as triglycerides, the preferred form. The bioidentical, triglyceride form found in this product allows for enhanced absorption and better assimilation in the body. This formulation is a convenient method of achieving optimal omega-3 levels in the body.

So what is the best way to work the powerful properties of omega-3s into your diet? Here is some inspiration for some healthy and delicious recipes that are both gluten free and rich in omega-3s:

All three omega fatty acids play a role in overall health, but achieving a proper balance of omega 3 fatty acids to omega 6 and 9 fatty acids is critical to maintaining optimal health.

Those with celiac disease or gluten sensitivity are more susceptible to omega-3 deficiency due to challenges with absorption in the small intestine. I recommend that those with celiac disease or gluten sensitivity be particularly motivated to test levels, keep an eye out for signs of deficiency, include omega-3 rich foods in their diet and take a high quality omega-3 supplement. A focus on omega-3s will help to keep the important omega 3:6 ratio in check to manage inflammation and prevent disease.