Gluten sensitivity is a common cause of malabsorption and nutritional deficiency.  Choline is no exception to this rule.  While choline has existed just as long as any other nutrient, it has only recently started to get some well deserved attention.

Choline was only recognized as an essential nutrient by the Food and Nutrition Board of the National Academies of Medicine beginning in 1998. It is also a recent addition to most food nutrition labels and dietary supplement labels.

Below you will learn about the following:

Choline is an essential nutrient found in all living cells in the body. This means that while the body can produce some choline itself, it needs you to consume choline in order to meet its needs.

Choline is closely related to the B vitamin family. Most of the choline in the body is a component of other compounds, like the neurotransmitter acetylcholine, a chemical used in the transmission of brain impulses between nerves, muscles, and organs. And phosphatidylcholine, a type of phospholipid that helps protect the cell and maintain its shape.

Choline’s metabolites have structural, metabolic, and regulatory roles within the body, including:

In addition, a significant body of evidence suggests that maternal choline intake during pregnancy, and possibly lactation, has lasting beneficial neurocognitive effects on the growing child. 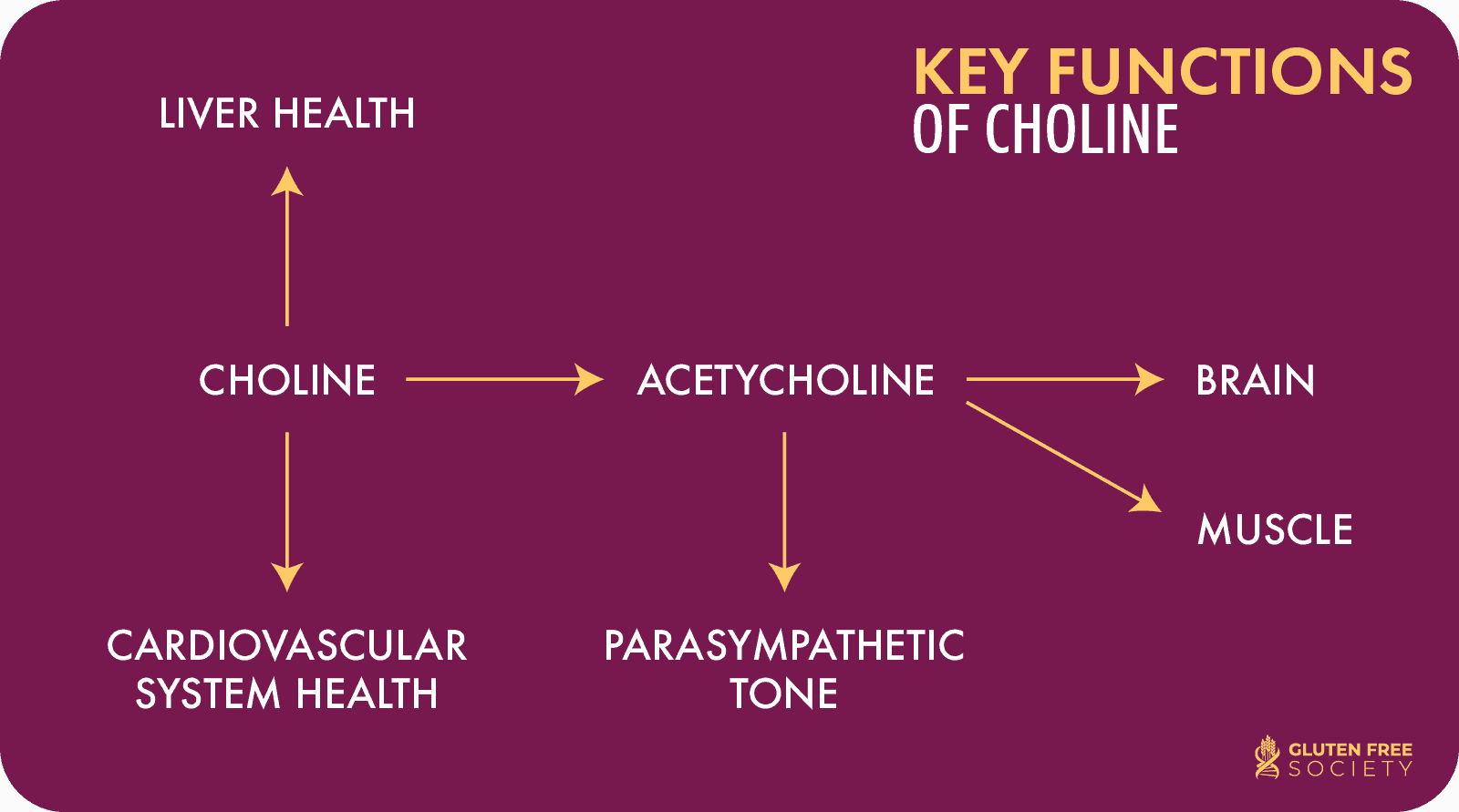 Adult men need 550mg and women need 425 mg of choline per day. Pregnant and breastfeeding women need 550mg. However, it is estimated that 90% of the U.S. population does not meet this recommended intake.

Because choline is found predominantly in animal-derived foods, vegetarians and vegans may have a greater risk for choline deficiency.

Gluten sensitivity can be responsible for a variety of symptoms and health issues, and many of these symptoms are also caused by a lack of choline.  Symptoms of choline deficiency include the following:

As choline supports a wide variety of critical functions within the body, the effects of choline deficiency are widespread and can be devastating if experienced long term. Complications due to choline deficiency include the following:

Patients with rheumatoid arthritis and psoriasis may have an increased risk for developing choline deficiency if they are being medicated with the drug, methotrexate.

Humans can produce small amounts of choline endogenously (that is, within the body, from other substances in the body). However, the nutrient must be consumed through food or supplementation to prevent signs of deficiency.

Choline is found most abundantly in animal foods, although it is found in some plant foods as well. The following foods are naturally gluten free and contain choline: 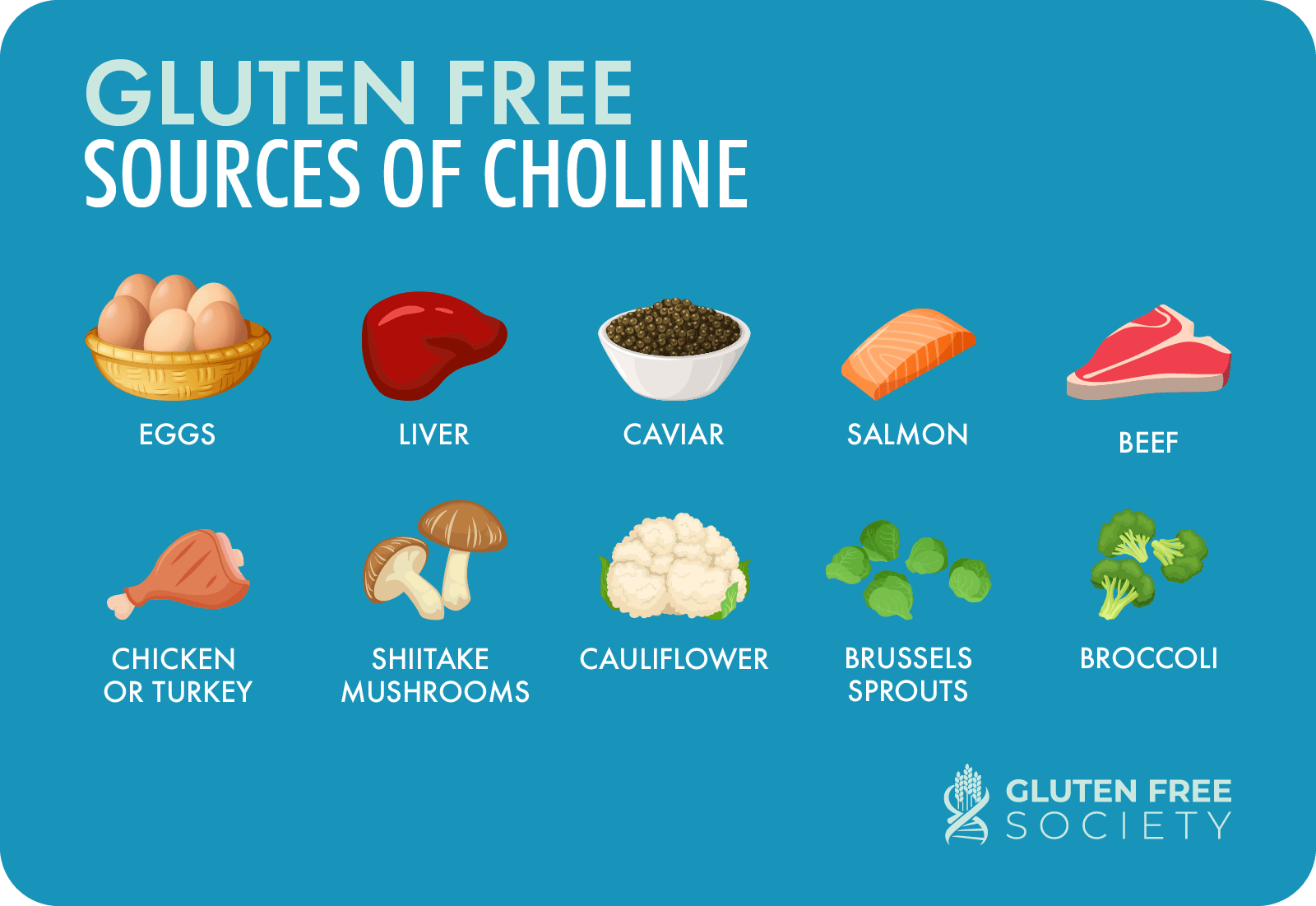 Supplementing with choline is very safe, but toxic levels can be reached in excess of 7,500 mg/day.  Symptoms can include the following:

So what is the best way to incorporate choline into your diet? Here is some inspiration for some healthy and delicious recipes that are both gluten free and rich in choline:

Choline is needed for a number of critical functions in the body, but it must be consumed through diet or supplementation in order to meet your needs. Research shows that a vast majority of the population is deficient in choline. Those who avoid animal products may be at a particularly high risk since the richest sources of choline are found in animal foods. Those with celiac disease and gluten sensitivity may also be at a higher risk of deficiency since research has suggested a link between choline metabolism and celiac disease.

Given its high importance in the body and significant risks associated with deficiency, it is worth evaluating your choline intake and making adjustments to your diet to ensure adequate intake.