Why are Some Doctors Scared of Gluten Sensitivity?

Gluten Sensitivity – Does it Exist?

A recent paper was published based on an interview done with Dr. Stefano Guandalini of the University of Chicago Celiac Research Center. The article stated that gluten sensitivity is not a real issue, and that most people going gluten free are simply following a public trend. The article states that going off of gluten can be dangerous for those without celiac disease (This last statement is absolutely ridiculous.)

Now I know that this angers many of you. The arrogance and ignorance of such statements is appalling. Especially considering the amount of people with gluten sensitivity issues as well as the amount of scientific evidence validating the condition. Take heart and remember the following:

All truth passes through three stages. First, it is ridiculed. Second, it is violently opposed. Third, it is accepted as being self-evident.

Currently we are in the first two stages. Ignore the naysayers. Remember that most medical doctors don’t even study nutrition. That being said, how can they be qualified to comment on a spectrum who’s origin is nutritional? The time of ignoring the power of food as a contributing cause in health and disease is coming to an end. The time of doctors calling their patients crazy because the flawed lab test they are using comes back normal is at an end.

The following picture displays some of the more common manifestations of gluten induced diseases. Problem is, many people, doctors, nutritionists, and the media are mostly in the dark when it comes to the different diseases linked to this food protein. 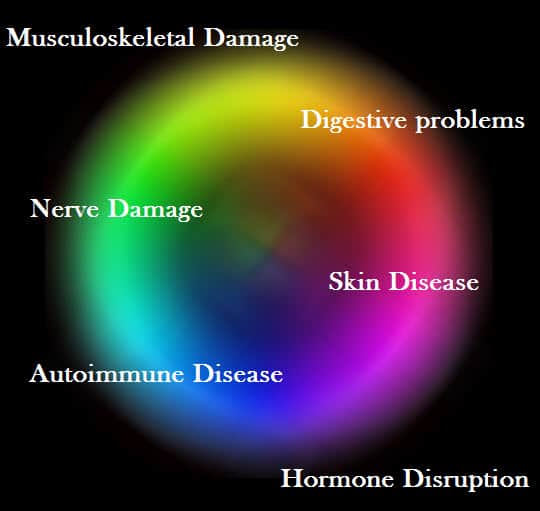 Gluten sensitivity is a systemic autoimmune disease that occurs in genetically susceptible individuals on ingesting gluten. It can appear at any age, then becoming a permanent condition. It is more frequent in women, as happens with other autoimmune diseases. Celiac disease is the intestinal form and the most important manifestation among a set of gluten-induced autoimmune pathologies that affect different systems. Neurological manifestations of gluten sensitivity, with or without enteropathy, are also frequent, their pathogenesis including an immunological attack on the central and peripheral nervous tissue accompanied by neurodegenerative changes. The clinical manifestations are varied, but the most common syndromes are cerebellar ataxia and peripheral neuropathy. Finally, gluten sensitivity is associated to a varying degree, with other complex diseases and could influence their evolution. The early detection of cases of gluten sensitivity with neurological manifestations and subsequent treatment with the gluten-free diet could provide remarkable benefits to the patients.

This research study is just another study of an ever growing list of medical research documenting the existence of gluten sensitivity in the absence of celiac disease. Why is this important? Most doctors don’t know the difference. Most doctors aren’t aware that gluten can contribute to hundreds of symptoms, syndromes, and diseases. Many of these symptoms manifest not in the gut, but in other tissues and organs. If you know a doctor who needs educating, please inform them that Gluten Free Society now offers an online certification program. This course is a 2 part, 10 hour class on what they need to know. Don’t let a doctor tell you that you are crazy or that the disease is all in your head. Below is a list of some of the common ways gluten can affect you.

If gluten has affected your health in ways not linked to the intestine, share it with us below on facebook.

4 thoughts on “Why are Some Doctors Scared of Gluten Sensitivity?”