Though not a condition we often hear or talk about, we are all somewhat familiar with anemia. Women are tested for it while pregnant, as are babies at those early pediatrician appointments. But while doctors may take steps to catch this condition early, it’s a prevailing problem in the United States and one that is often dismissed or misdiagnosed.

Anemia is the lack of ability to deliver oxygen to parts of the body. This can be caused by a deficiency of a nutrient, the inability to produce the protein hemoglobin, an issue with the structure of red blood cells, or an issue with the bone marrow’s ability to make red blood cells. Without oxygen reaching tissues in the body, energy cannot be generated and the body will fail to function, repair, heal and generally maintain itself. 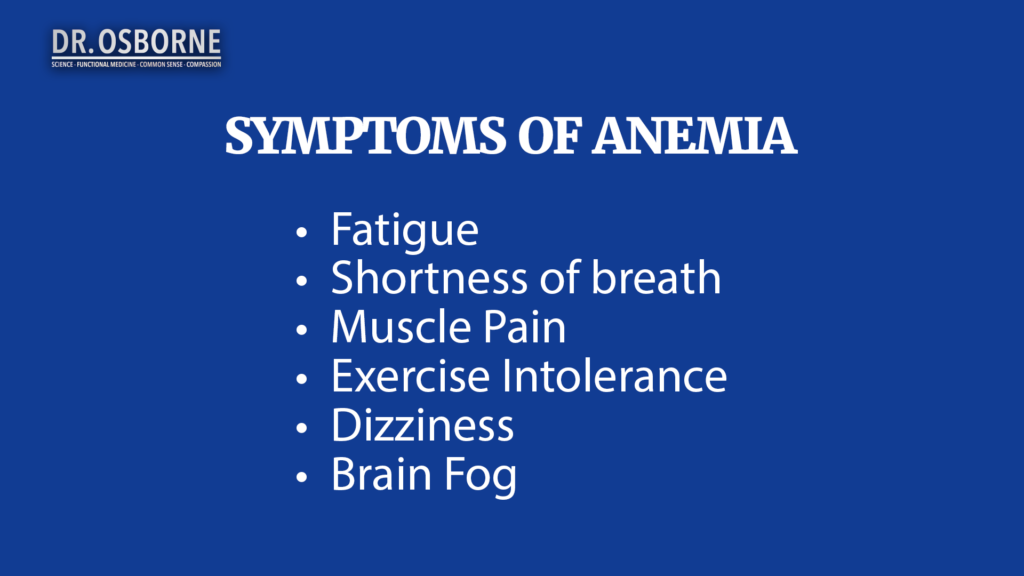 Anemia may manifest itself in a variety of symptoms with one of the most prevalent being exhaustion. A person with this condition can sleep for 10 hours and still wake up feeling tired. Shortness of breath from minor exertion, brain fog, muscle pain, spasms, and knots, as well as dizziness and exercise intolerance, can also occur.

These symptoms are directly related to the fact that adequate oxygen is not reaching corresponding tissues in the body. Unfortunately, problems with the thyroid may also manifest with these symptoms often leading to a misdiagnosis. Many patients will be prescribed thyroid medication but will continue to have these issues due to treating the wrong condition.

To truly comprehend anemia, it’s important to understand the role of red blood cells (RBCs) play in the body. Within the bone marrow, erythropoietic stem cells work to produce RBCs which are large and contain a nucleus and DNA when first generated. As they mature, they take on a completely different shape, referred to as a biconcave discoid, getting rid of the nucleus, and grabbing onto the protein hemoglobin.

The shape of the red blood cell, as well as the hemoglobin, allows for the attachment and transport of oxygen to tissues within the body. These also allow for the attachment and expulsion of carbon dioxide. If an individual does not have enough RBCs or enough functional ones, he or she will not have the capacity to adequately deliver oxygen and discard carbon dioxide.

While there are different types, when most people think of this condition, they associate it with low iron. This form is easier to diagnose because it can be seen with a simple blood test. Low iron, ferritin, red blood cell count, hematic rate, or a reduction in hemoglobin, mean corpuscular volume, and mean corpuscular hemoglobin all indicate anemia. It could manifest with all of these being low or just a few.

While easy to treat in most cases, those with a gluten sensitivity or celiac disease may have a hard time identifying why this condition is present and persistent. This occurs because in these individuals because gluten damages parts of the stomach and intestine where iron is absorbed causing malabsorption. Therefore, those who have been diagnosed with iron-deficiency anemia and have a hard time treating it should be tested for gluten sensitivity.

Another form of this condition is microcytic hypochromic anemia. This can occur if a person is deficient in iron, copper, protein, zinc, and sometimes vitamin B6. In this case, red blood cells end up too small to function properly. They are also lighter in color as oxygen provides color to RBCs.

To test for this form, a lymphocyte proliferation test is best. It will measure vitamin and mineral content in the body and will indicate if there is a deficiency.

If the body is deficient of several B vitamins, like B12, B6, and Folate, then macrocytic anemia is likely to occur. This is when the red blood cells are too large to carry oxygen well. The mean corpuscular volume (MCV) may also be too high because of the size of the cell.

If red blood cells have a weak membrane and break open too easily, this could result in hemolytic anemia. This condition can occur if an individual is deficient in vitamins C, A and E, antioxidants, and possibly Omega-3 fatty acids.

To test for this, a lymphocyte proliferation test to measure for deficiencies may be best. Looking at the blood cells themselves may also be beneficial. If they are misshapen, this could indicate this condition as well. 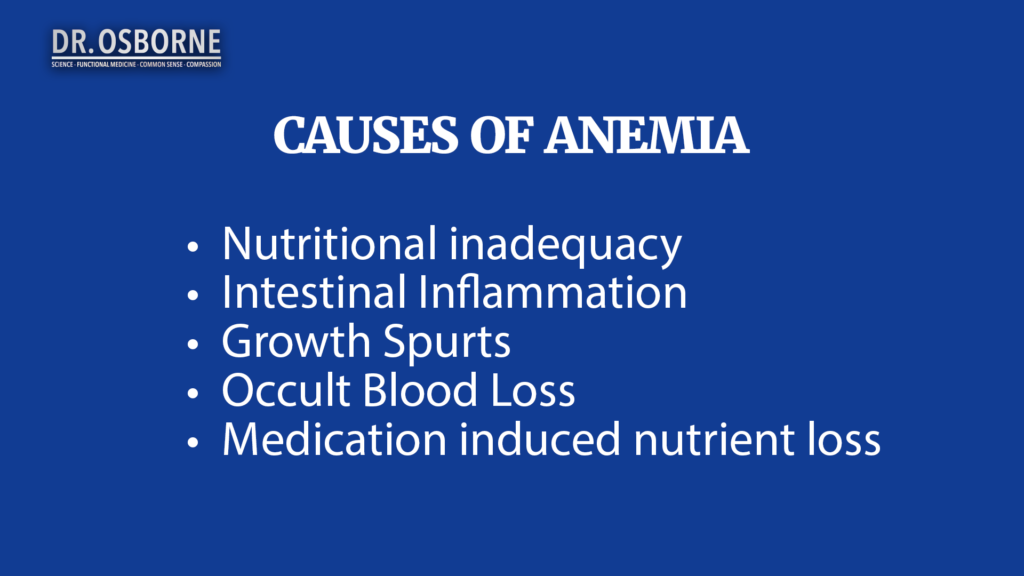 As discussed, being deficient in several vitamins and minerals can cause anemia, but there are many other causes as well. Things like not getting enough calories, or malabsorption from conditions like gluten sensitivity, Celiac Disease, Crohn’s Disease, ulcerative colitis, and esophagitis may also be causes.

Significant blood loss may put an individual at risk as well. This can include a heavy menstrual cycle for women, occult blood loss, or bleeding in the GI tract, trauma, surgery, and donating or having blood drawn. Furthermore, children going through growth spurts are at risk due to their body needing extra nutrients to build new bone and muscle.

To prevent or even combat anemia, it’s important that individuals are consuming the right foods. Consider including liver, bison, and other animal meats (especially red meat) into the diet for greater intakes of iron. Spinach is also a good source, but the oxalate in spinach can make the iron-hard to absorb. Additionally, vitamin C helps the body to absorb iron, so increasing this is beneficial as well.

On the other hand, beware of medications. Medications like antacids eliminate acid in the stomach that are needed to absorb iron, protein, copper, B12, and even zinc. Nonsteroidal anti-inflammatories like aspirin and ibuprofen can also create ulcers and erosion in the GI tract leading to occult blood loss.

Get the Right Help

So if you have been struggling with the symptoms of anemia, stop suffering alone. Find a medical professional who is willing to listen, run the tests, and discover the root of your issues. Making just small changes in your diet or adding the right supplements can truly make all the difference in your life.