Can Gluten Cause Heartburn?

Do you suffer with heartburn? Has your doctor put you on medications like Nexium or Aciphex to control your reflux disease? Remember that the drug does not correct the origin of the problem. It only masks the symptoms. Research suggests that people who suffer from acid reflux – AKA gastroesophageal reflux disease (GERD) benefit greatly from a gluten free diet…

Celiac disease (CD) may often be associated with various motor disorders affecting the different segments of the digestive tract, including the esophagus. Although it has not been universally reported, some available evidences indicate that pediatric and adult celiac patients could manifest a higher frequency of esophagitis and gastroesophageal reflux disease-related symptoms compared to nonceliac patients. In addition, several published studies have consistently shown the efficacy of a gluten-free diet in rapidly controlling esophageal symptoms and in preventing their recurrence. Since the participation of gluten in the esophageal symptoms of CD seems clear, its intimate mechanisms have yet to be elucidated, and several hypothesis have been proposed, including the specific immune alterations characterizing CD, the reduction in nutrient absorption determining the arrival of intact gluten to distal gastrointestinal segments, and various dysregulations in the function of gastrointestinal hormones and peptides. Recent studies have suggested the existence of a possible relationship between CD and eosinophilic esophagitis, which should be more deeply investigated.

What the Gluten Free Warrior Says:

Medicating esophageal reflux without addressing it’s origin is a bad idea. The medicines mask the actual problem and create a laundry list of side effects in the process. Food is the most common trigger for this problem and allergies and intolerances should be ruled out as a primary part of a doctors work up.

Medications that reduce acid production by the stomach have terrible nutritional side effects. Recent studies have linked these medicines to bone loss. The diagram below illustrates some of the more common nutritional consequences of using anti-acid medications to control the symptoms of heartburn: 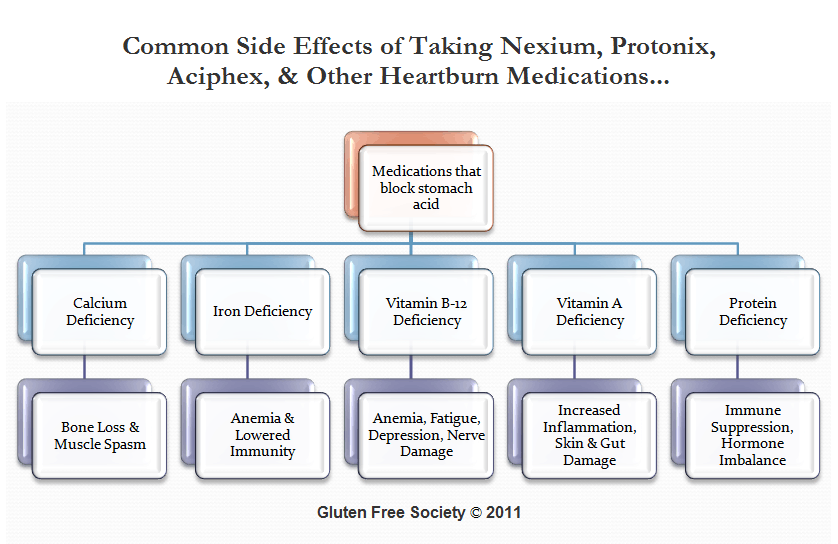 Too Much Acid Is Not Always the Cause of Reflux Disease

Often times doctors make the assumption that the symptoms of heart burn are caused by too much acid. Unfortunately, this leads to improper treatment and a failure to recognize the true origin of the condition. One of the side effects of gluten is that it can damage the cells in the stomach responsible for producing acid. This in turn leads to a reduced capacity to digest food properly. Undigested food can cause irritation to the stomach lining and lead to similar symptoms.

Infection Can Be A Cause of GERD and Stomach Ulcers

Bacterial infection is a known cause for reflux disease. Most notably, H. pylori. Scientists discovered this bacteria as a cause for duodenal and stomach ulcers in 1982. Many doctors fail to test for the presence of this type of infection in patients presenting with gastric symptoms.

What to Do if You Suffer With Chronic GERD

Helpful Supplements to Naturally Support You