In celiac disease (CD), for its multifactorial nature, the target organs are not limited to the gut, but include thyroid, liver, skin and reproductive and nervous systems. Between the extraintestinal symptoms associated with CD, autoimmune thyroid diseases (AITDs) are more evident, underlining as CD-related autoimmune alterations can be modulated not only by gluten but also by various concurrent endogenous (genetic affinity, over-expression of cytokines) and exogenous (environment, nutritional deficiency) factors. In their pathogenesis a central role for over-expression of interleukin-15 (IL-15) is shown, by inhibiting apoptosis, leading to the perpetuation of inflammation and tissue destruction. Thyroid is particularly sensitive to selenium deficiency because selenoproteins are significant in biosynthesis and activity of thyroid hormones; besides, some selenoproteins as glutathione peroxidase are involved in inhibiting apoptosis. Thus, selenium malabsorption in CD can be thought as a key factor directly leading to thyroid and intestinal damage. Considering the complexity of this interaction and on the basis of available evidence, the aim of this review is to assess as preventive and therapeutic target the role of IL-15 and selenium in the pathogeneses of both CD and AITD.

Gluten induced gut damage can impair proper digestion, absorption, and assimilation of vitamins and minerals. I have discussed in great detail the impact of magnesium deficiency in patients with gluten sensitivity. The study above re-confirms this association as it relates to selenium and hypothyroid based disease.

The diagram below illustrates the mechanisms and consequences involved with gluten and selenium deficiency. Not the outcomes in the bottom right corner of the graph: 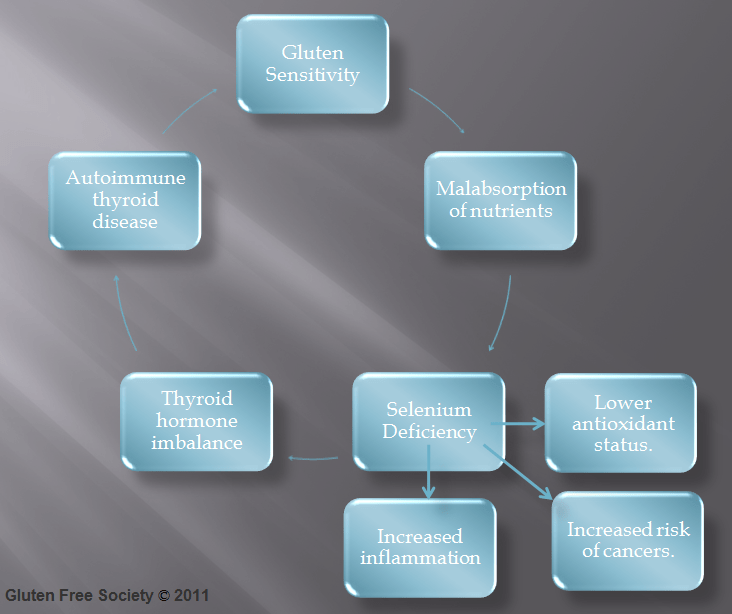 Selenium drives one of the most important antioxidant systems in the body – glutathione. This system is important for fighting cancer cell formation and for fueling the immune system. It controls inflammation through several enzyme based mechanisms. It also aids in liver detoxification. Selenium deficiency can contribute to prostate, breast, and liver cancers to name a few. This mineral is also a natural blood thinner. When low, the blood becomes thicker and stickier thus contributing to an increased risk for heart disease and stroke. The elevation in inflammation increases the risk for all known chronic degenerative diseases.

Selenium and Your Thyroid:

Conversion of T4 to T3 requires adequate amounts of this nutrient. Remember that T3 is the thyroid hormone that increases metabolic rate and aids in weight loss. Without it, your body’s metabolism will be imbalanced. For more on this, read this article <<<

If you are gluten intolerant, you should be aware that getting tested for vitamin and mineral deficiencies is a very important factor in healing. Many patients fail to respond to the gluten free diet because they still have unresolved nutritional issues. One of the best lab tests your doctor can use to measure for deficiencies is called a Spectracell. This lab measures more than 30 vital nutrients including selenium.