Can Gluten Affect Your Hormones?

How Gluten Affects Your Hormones 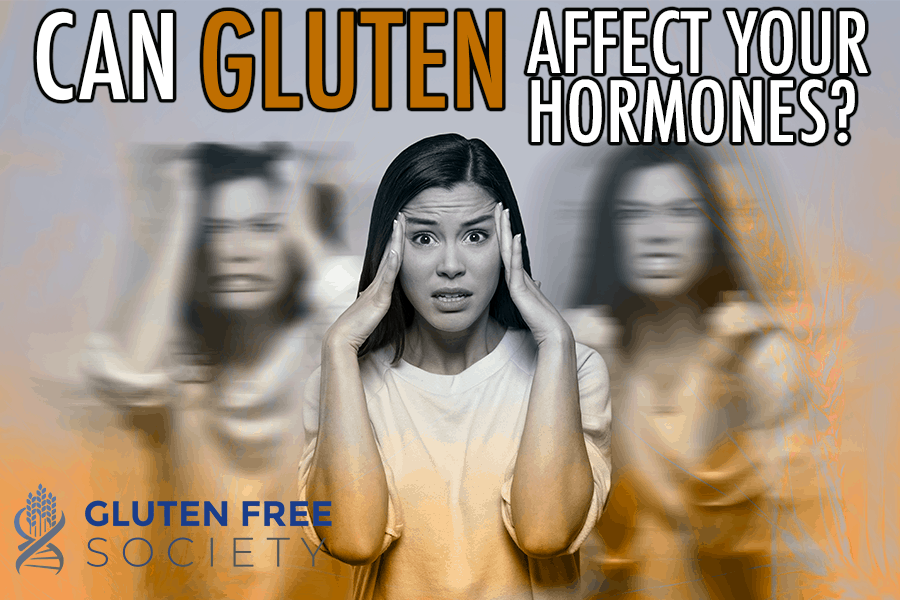 Hormones are chemicals produced by various glands throughout your body and released to regulate specific functions. For example, your thyroid hormone helps regulate your metabolism. Estrogen, a sex hormone, helps regulate menstruation in women. And cortisol, a stress hormone, helps regulate blood pressure. Thus, hormones play many vital roles, which means any imbalances can lead to dysfunction and disease.

A hormone imbalance occurs when there’s too much or not enough of a specific hormone circulating in your bloodstream at a specific time. For example, estrogen rises and falls twice throughout your menstrual cycle. And insulin rises after you eat and falls hours later.

Sadly, hormonal imbalances are prevalent in today’s modern world. Common symptoms include (but are not limited to):

And while these symptoms are common, they’re not normal. These are signs that something isn’t quite right. 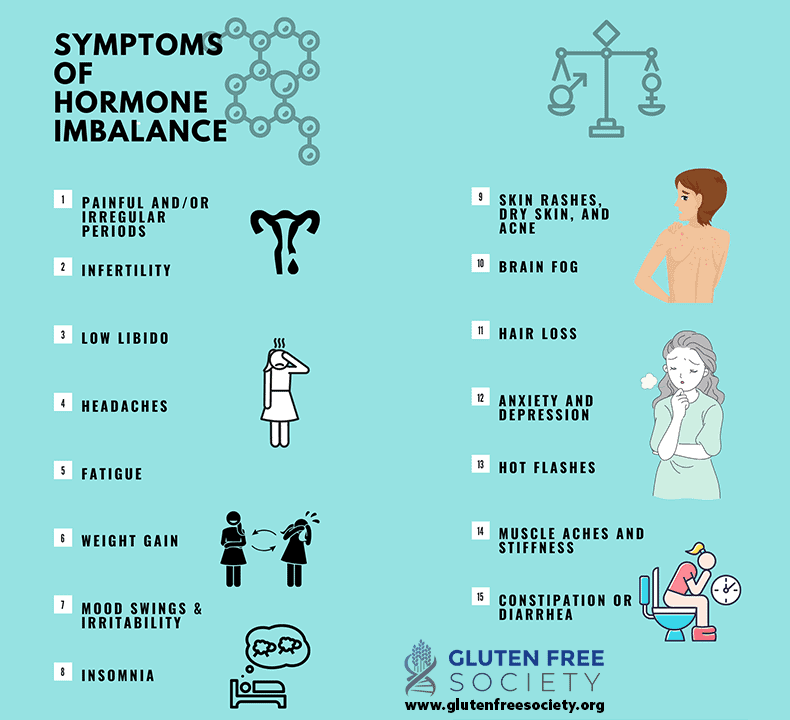 There are many avenues to explore when it comes to hormonal imbalances. Stress, environmental toxins, disease, medications, and physical injuries to glands. But one that often gets overlooked is nutrition. And gluten alone can cause a wide range of hormonal problems.

Nutrition and Your Hormones

Your diet plays a significant role in hormone health. For example, your body needs certain nutrients to synthesize hormones. Steroid hormones, such as estrogen and testosterone, are made from cholesterol. And insulin is made from protein.

Vitamins and minerals also regulate the synthesis of hormones. For instance, in the absence of iodine, your thyroid hormone production decreases. Therefore, an iodine deficiency can lead to hypothyroidism (a.k.a. under active or low thyroid).

This is relevant because those with gluten sensitivity often experience nutrient deficiencies. Essentially, gluten irritates and damages the lining of the small intestine. And the small intestine is responsible for a significant portion of digestion and nutrient absorption.

Plus, grain-based foods, such as bread, pasta, crackers, and sweets, are heavily processed and void of essential nutrients.

Gluten is an Endocrine Disruptor

An endocrine disruptor is a substance that can mimic your hormones and lead to imbalances, dysfunction, and disease. For instance, they can bind to hormone receptors on your cells and trigger a response. Sometimes the response may be too strong, not strong enough, or different than desired.

Gluten itself can act as an endocrine disruptor. More specifically, gluten proteins may cross-react with antigens on your cells and trigger an inflammatory immune response. This helps explain why several common abnormalities among those with celiac disease are hormonal in nature, including delayed puberty, type 1 diabetes, low thyroid, and low cortisol.

Wheat is also sprayed with an herbicide known as glyphosate before harvesting to help speed up the drying process. And glyphosate is a known hormone disruptor in human cells. Plus, it’s toxic effects can also damage your DNA.

In addition, some pesticides used to grow grains can also have endocrine-disrupting effects. And studies have shown they can alter the synthesis or action of a wide range of hormones, including estrogen, testosterone, thyroid hormone, cortisol, progesterone, and prolactin.

As previously mentioned, cortisol is a stress hormone produced and secreted by your adrenal glands. Cortisol naturally rises and falls throughout the day. At normal levels, cortisol helps regulate your metabolism, blood pressure, and blood sugar. It also helps reduce inflammation.

However, when under stress, a cascade of events triggers your adrenal glands to release adrenaline and increase the output of cortisol to support your body’s “fight or flight” response.

This response is necessary to combat acute stress. For example, cortisol raises your blood sugar to ensure you have the energy you need to overcome the threat at hand. However, many people today are under constant stress, whether it be emotional, physical, or often a combination of both.

Chronic inflammation caused by gluten is a form of physical stress, which can raise your cortisol levels. If untreated, the consequences are far-reaching. For example, elevated cortisol hinders digestion, growth, and reproduction as well as immune function. There’s even a connection to a region in the brain that controls your mood.

On the other hand, celiac disease is associated with Addison’s disease, an autoimmune condition that attacks your adrenal glands and causes low cortisol (a.k.a. adrenal insufficiency).

In addition, nutrient deficiencies caused by gluten can play a role in the development of Addison’s disease. For example, vitamin D appears to be involved in regulating genes responsible for the synthesis of cortisol.

The three sex hormones are estrogen, progesterone, and testosterone. They play a role in the development of sex distinguishing features as well as reproduction. Thus, common abnormalities and conditions associated with sex hormone imbalances include:

Your sex hormones may be affected by endocrine disruptors as I mentioned above. Gluten-induced inflammation, an overactive immune system, other hormonal imbalances (e.g., cortisol, thyroid hormone, prolactin), and nutrient deficiencies are also potential problems. This may help explain why those with celiac disease and gluten sensitivity are prone to the abnormalities listed above.

Science tells us that women with celiac disease are more likely to experience infertility and menstrual abnormalities than the general population. And these conditions are commonly linked to low progesterone, low thyroid hormone, and high prolactin.

A study comparing pregnancy outcomes of mothers with celiac disease on a gluten-free diet versus untreated mothers found the following:

These are significant consequences. However, the same researchers also found that these outcomes were corrected with a gluten-free diet.

The exact mechanisms behind these correlations are not fully understood yet. But researchers believe an overactive immune system plays a role.

For example, one study found that celiac disease autoantibodies were binding to the placenta and causing dysfunction. And it’s worth noting that once established, the placenta is responsible for producing both progesterone and estrogen.

Another study analyzed the placentas from 32 full-term births of mothers with celiac disease. Of the mothers with untreated cases, researchers found large concentrations of gliadin, a gluten protein, in the cells of the placenta. And the birth weights of the babies in these cases were lower. This may suggest that gluten proteins interact unfavorably with the placenta in genetically susceptible women.

Hypothyroidism is a condition in which your thyroid gland fails to produce enough thyroid hormone, which can cause most of the symptoms I listed in the introduction of this article. This is possible because your thyroid hormone helps regulate many functions, including your metabolism, brain development, protein synthesis, and bone growth to name a few.

There are four main causes of thyroid hormone dysfunction, which include:

Celiac disease is associated with many other autoimmune diseases, including Hashimoto’s. Essentially, damage to the lining of the gut leads to inflammation, over stimulation of the immune system, and cross-reactivity of gluten proteins with antigens on the thyroid gland. If unchecked, Hashimoto’s is likely to develop.

Science has shown that women with autoimmune thyroid disease that were put on a gluten-free diet experienced a reduction in antibodies that attack the thyroid as well as an increase in thyroid hormone and vitamin D. However, women in a control group that kept gluten in their diet didn’t experience any of these clinical changes.

Another study evaluated a diet without gluten and found that it significantly reduced markers associated with inflammation and immune system activation in women with Hashimoto’s. Plus, the women in the study experienced a reduction in related symptoms.

As previously mentioned, gluten can cause nutrient deficiencies. One nutrient specifically that greatly affects the thyroid is selenium. It’s necessary for the production and activity of thyroid hormone. Selenium also acts as an antioxidant and helps protect the thyroid gland from damage. Thus, gluten-induced selenium deficiency is believed to lead to thyroid dysfunction.

Other common nutrient deficiencies caused by gluten that are necessary for optimal thyroid function include magnesium, zinc, vitamin D, and vitamin B12.

When you eat a diet rich in heavily processed gluten-rich foods, it has a negative impact on your metabolic hormones. Because these foods contain high amounts of quickly digested starch and sugar, which spikes your insulin and can lead to chronically high insulin levels over time.

Insulin is a fat-storing hormone secreted by your pancreas. It pushes all sources of energy into your cells and excess energy gets stored as fat. It also prevents your body from burning stored fat.

If unchecked, insulin resistance, obesity, and type 2 diabetes are likely to develop. All of these conditions are inflammatory. Insulin resistance is also closely linked to polycystic ovarian syndrome (PCOS), which is characterized by elevated testosterone in women that causes infertility, hirsutism, and abnormal periods.

The last hormone I want to discuss is prolactin–a hormone secreted by your pituitary gland that works with estrogen and progesterone to develop breast tissue and prepare for lactation.

There’s evidence that a compound in gluten acts as an opioid compound in the brain, which leads to an excess of prolactin. Researchers also suggest inflammation associated with gluten can contribute to elevated prolactin levels, which can cause low libido, irregular periods, infertility, bone loss, and erectile dysfunction. 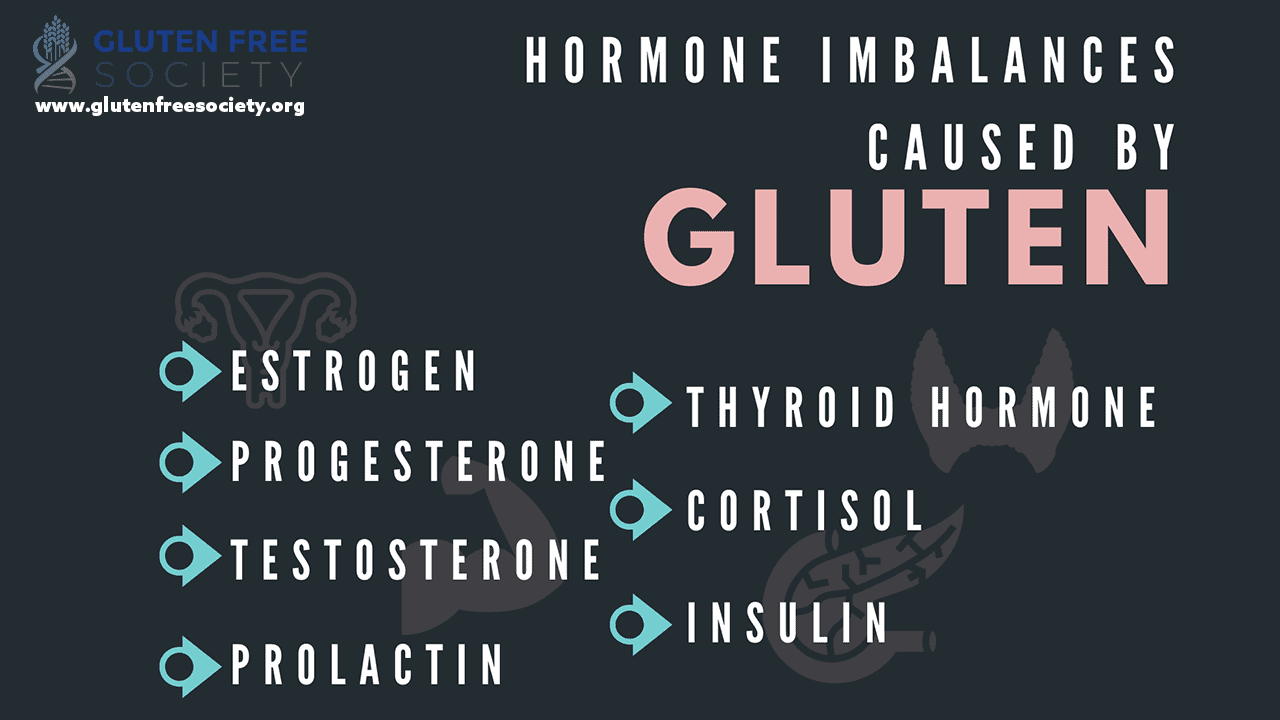 Can Gluten Affect Your Hormones?

Hormonal balance is essential for optimal health. And gluten can affect many hormones throughout your body as well as trigger a cascade of hormone-related problems. Thus, if you’re experiencing any hormonal imbalance symptoms, don’t rule gluten out as a contributing factor. A gluten-free diet may be what your body needs most.

Have you recovered hormone function after going gluten free? Chime in below.

4 thoughts on “Can Gluten Affect Your Hormones?”