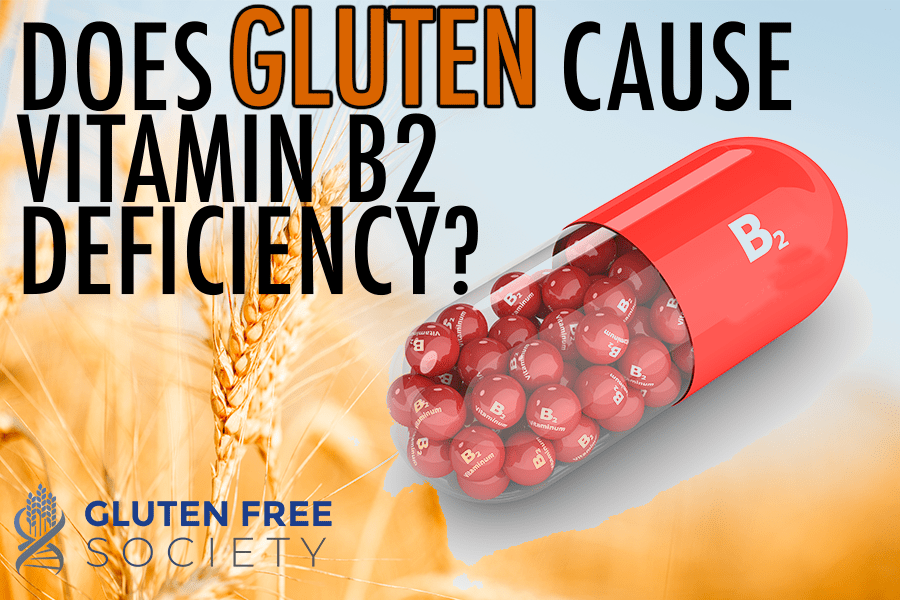 Can Gluten Cause Vitamin B2 Deficiency?

Can gluten cause vitamin B2 deficiency? Should those with a celiac diagnosis be concerned with supplementing vitamin B2 in their diet? The simple answer is yes, but before we dive into the connection between gluten sensitivity and vitamin B2 deficiency, let’s take a look at why B2 is such an important nutrient necessary for the health and well being of your body.

The B vitamins are often grouped together when discussed. And we’re often told B vitamins give us energy. And that’s true. B vitamins are used by our bodies to help make energy. But B vitamins do much more than that. And each B vitamin deserves a separate discussion. So today I’m going to discuss vitamin B2, also known as riboflavin.

The Key Roles of Vitamin B2

FMN and FAD also act as coenzymes. This means they bind with enzymes to activate them, which then initiates energy-producing reactions.

So without riboflavin, there’s no FMN and FAD. And without FMN and FAD, your cells will have a hard time making energy. This alone is a reason to ensure your intake of riboflavin is adequate and your gut is healthy enough to digest and absorb it. But the benefits of riboflavin don’t stop there.

Evidence suggests that riboflavin enhances the activity of potent antioxidant enzymes, which protect your cells from damage, dysfunction, and disease.

In fact, studies have shown that supplementing with riboflavin reduces the risk of heart abnormalities by increasing antioxidant activity as well as improving one’s cholesterol profile. It’s also been shown to reduce cellular damage caused by strokes and brain injuries as well as reduce diabetic complications caused by inflammation and oxidative stress.

Plus, its antioxidant effects may contribute to its ability to help prevent migraine headaches as well as protect cells against malaria infections.

Riboflavin also plays an important role in your body’s immune response. It helps trigger the production of immune cells and helps mobilize them to attack foreign invaders. At the same time, animal studies suggest it helps tame inflammation caused by these immune reactions.

Your bone density is also positively influenced by riboflavin. FAD acts as a co-factor for your MTHFR enzyme, which is necessary for a process called methylation. Without this process, an inflammatory compound known as homocysteine may build-up in your body. And elevated homocysteine levels are associated with bone loss and an increased risk of fracture.

It’s worth noting that the process of methylation plays an important role in many other functions, including DNA synthesis, detoxification, immune function, and energy production.

Riboflavin is also involved in the production of blood cells as well as iron absorption and utilization. In this study, when deficient women were given supplemental riboflavin, their iron status significantly improved.

Riboflavin is essential for healthy skin, eyes, and mucous membranes, including those that line your digestive tract.

Finally, riboflavin is involved in the metabolism of other vitamins, including vitamin B12, folate, and vitamin B6. So if you lack vitamin B2, the functions associated with these other vitamins may also be affected.

Riboflavin comes from the food you eat. And it’s absorbed in your small intestine. The bacteria in your colon also produce riboflavin, which is absorbed through your colon. However, bacterial riboflavin production only occurs if your gut bacteria population is healthy and it’s being fed appropriately.

Riboflavin isn’t stored in great quantities in your body. This means eating foods with riboflavin daily is necessary to avoid a deficiency.

It’s also worth noting that physical and emotional stress, as well as drug (prescription and recreation) and alcohol use, may increase your body’s need for vitamin B2.

Vitamin B2 deficiencies are common in developing countries, especially those that consume large quantities of rice. Those with celiac disease, chronic diarrhea, liver disease, inflammatory bowel disease, and alcohol addiction are also at greater risk. 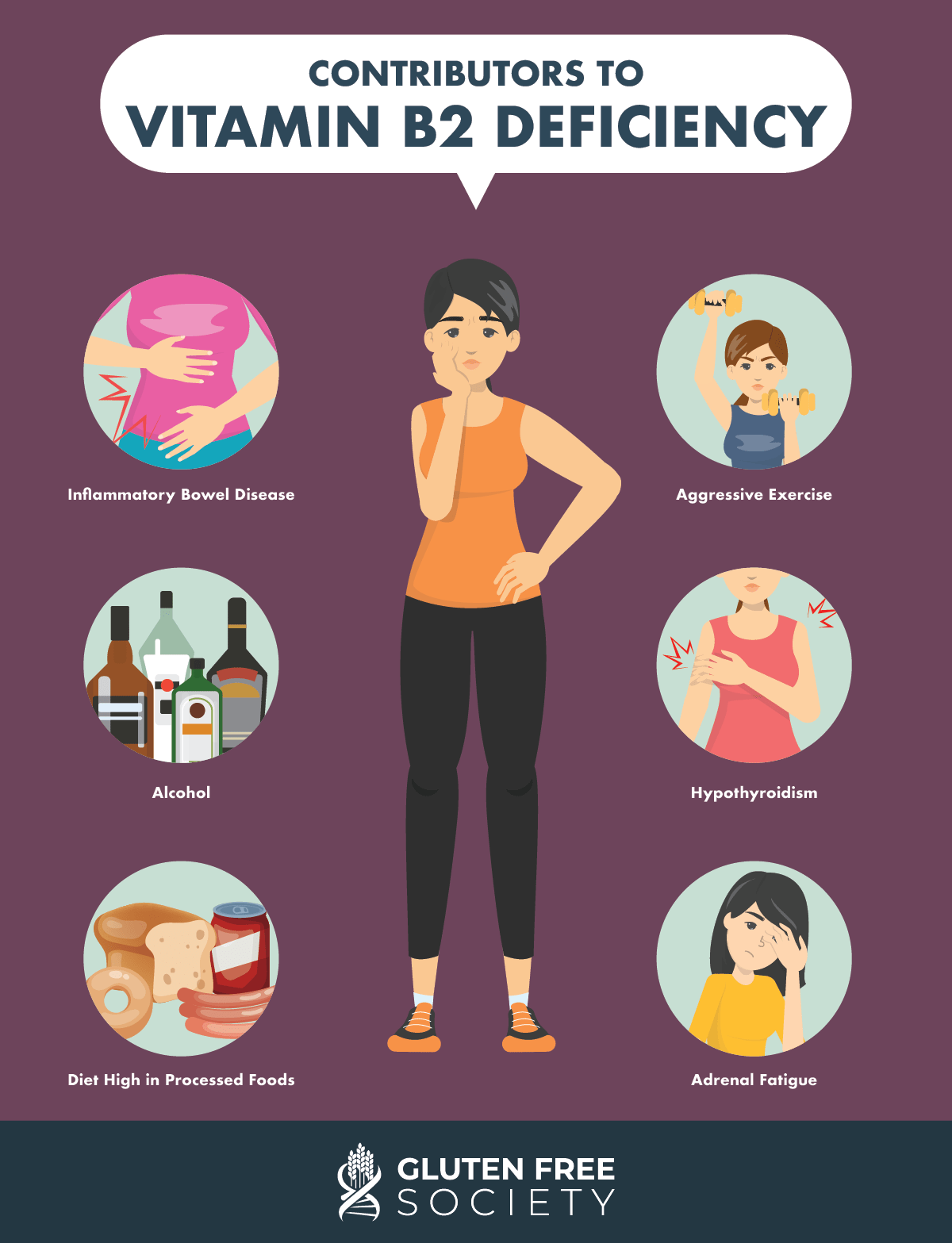 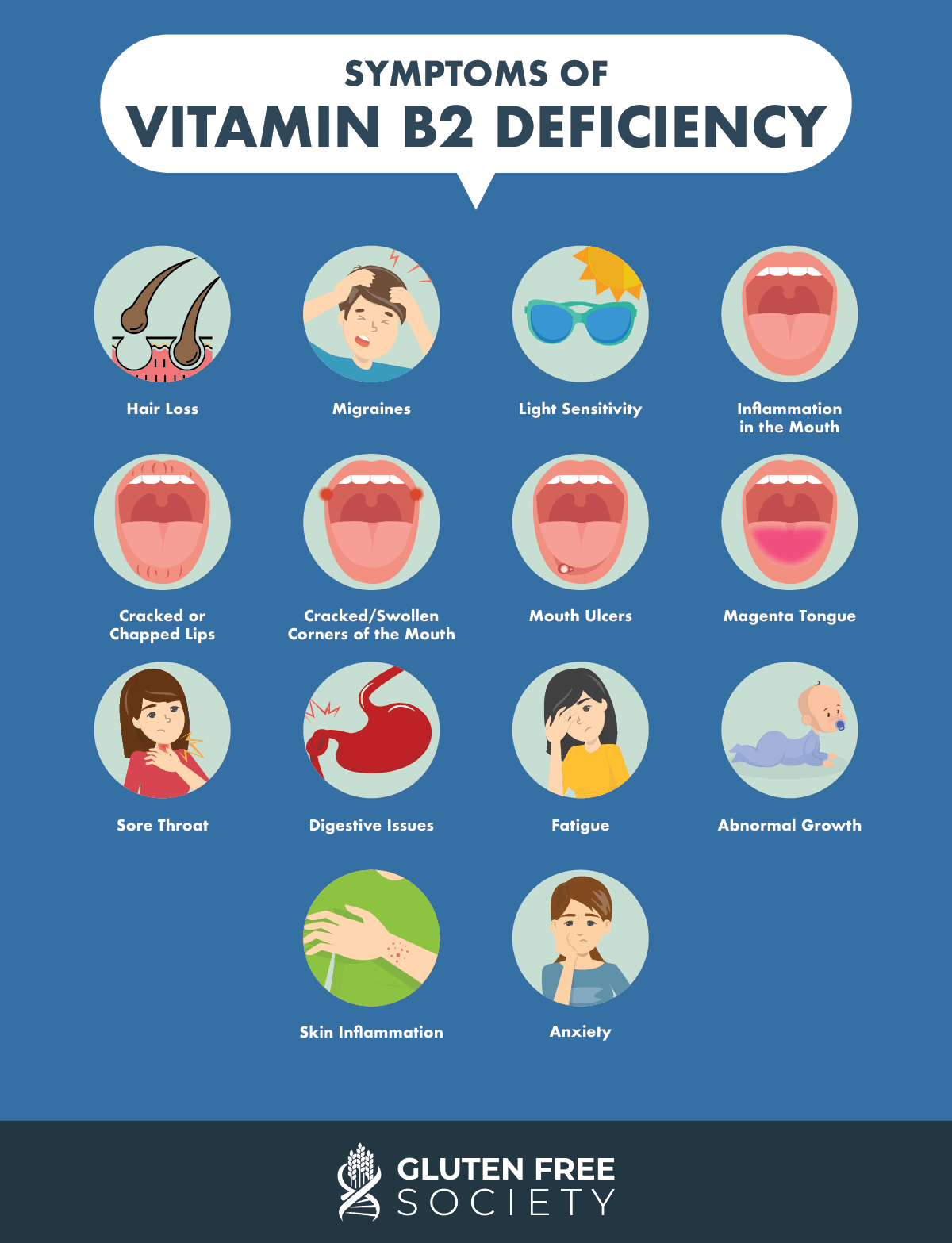 Vitamin B2 deficiency has also been associated with the following conditions: 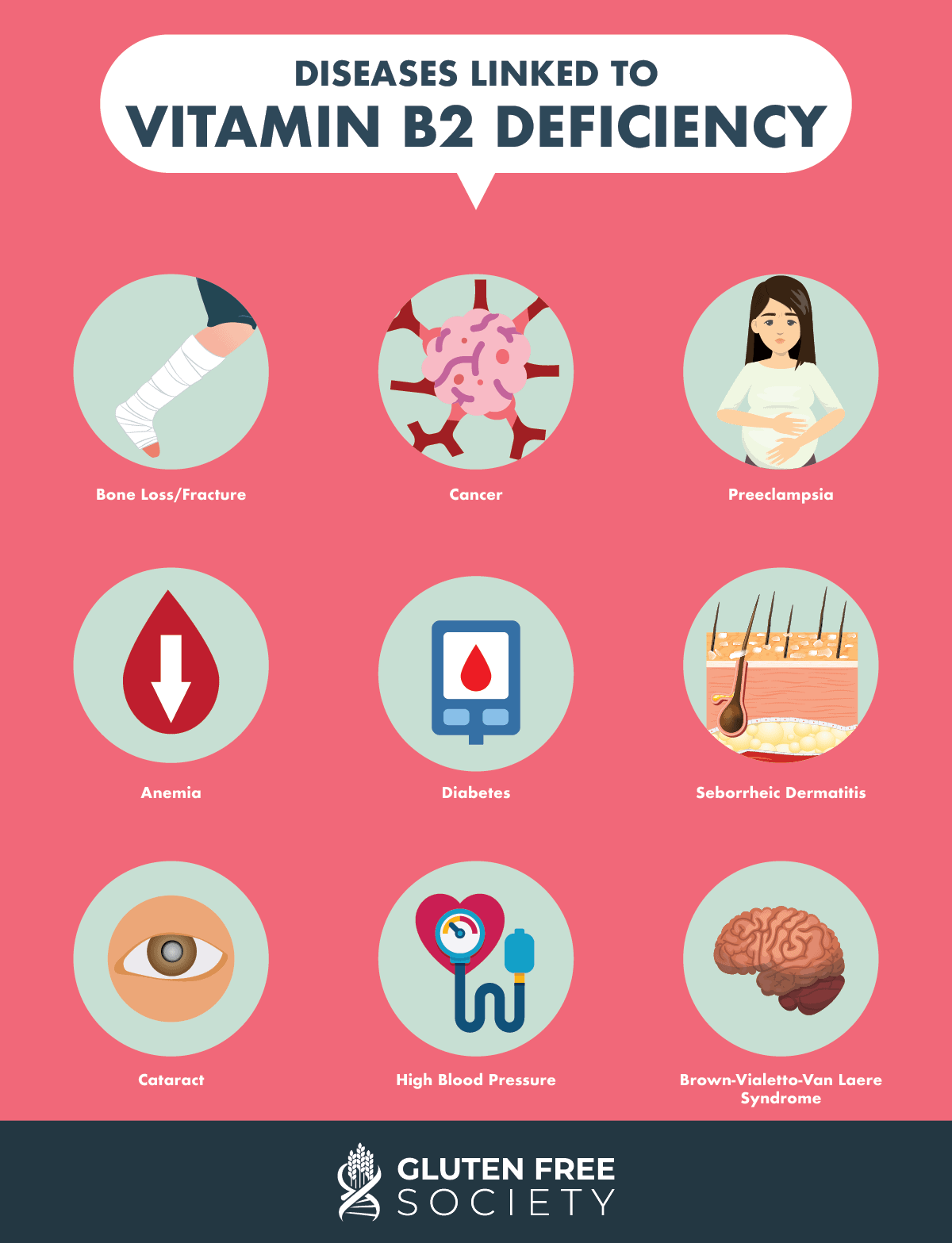 How Gluten Causes Vitamin B2 Deficiency

As I mentioned above, research indicates that those with gluten sensitivity are at greater risk of developing a vitamin B2 deficiency. This is because gluten damages the lining of the small intestine and disrupts the balance of gut bacteria. As a result, digestion and nutrient absorption are hindered. In addition, the bacterial production of vitamin B2 may be affected.

Gluten also causes diarrhea, which can lead to nutrients like Vitamin B2 being flushed out before they have a chance to be absorbed.

Plus, there’s evidence that night sweats may be a symptom of celiac disease caused by eating gluten. And sweating is another avenue for vitamin B2 loss since it’s water-soluble.

So if you have gluten sensitivity, there’s a good chance your body isn’t getting enough vitamin B2 to perform all the functions I mentioned above. And without intervention, you may start to see signs of deficiency.

The best solution is a strict gluten and grain-free diet. In the absence of gluten, your small intestine will begin to heal. You’ll then be able to fully digest your food and absorb the nutrients within.

Best Food Sources of Vitamin B2 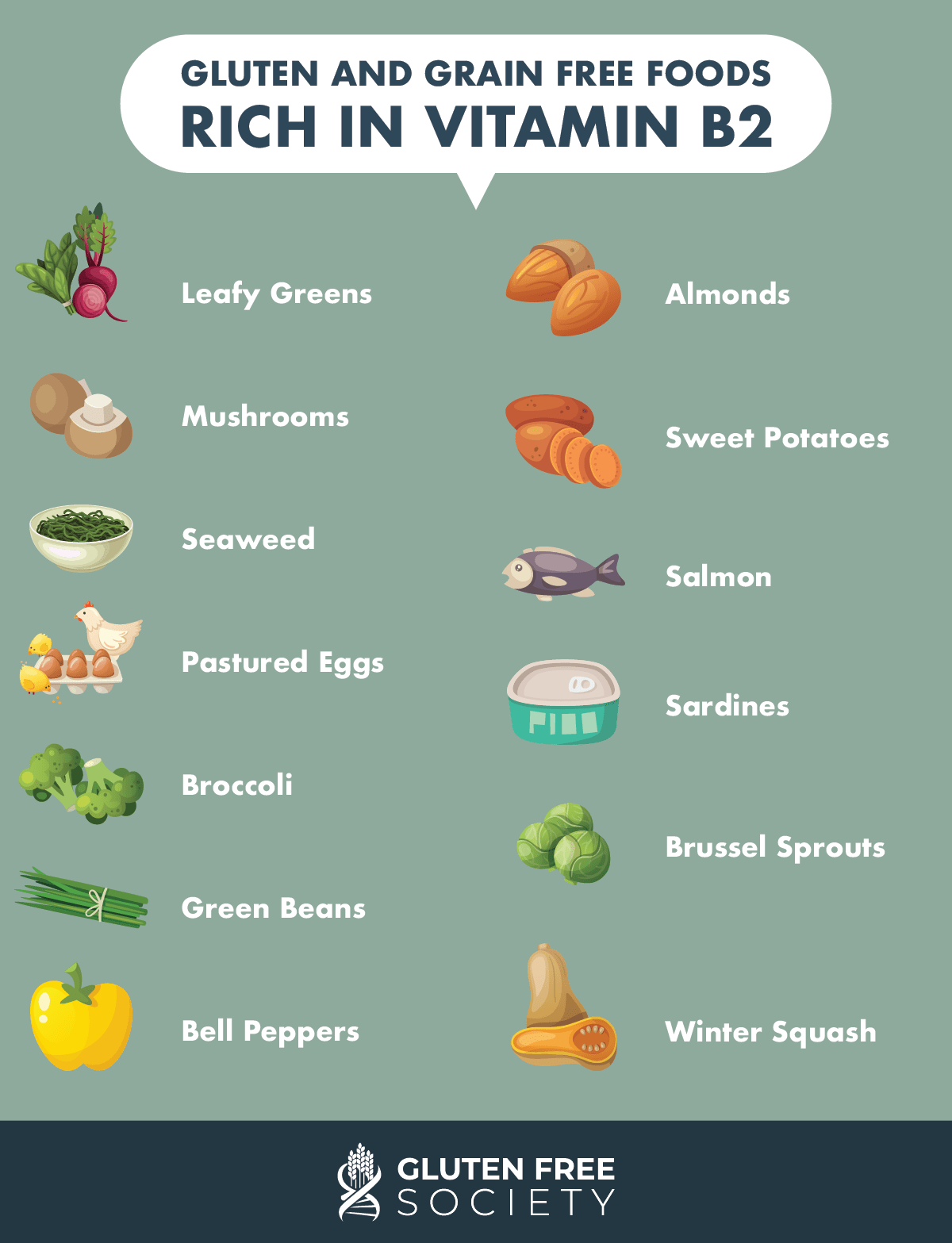 You won’t find vitamin B2 in processed foods. Because they mostly contain grains, sugar, and food additives. And these ingredients don’t contain vitamin B2. So you’ll need to rely on riboflavin-rich whole foods. Below are some of my favorites:

The good news is that riboflavin isn’t sensitive to heat. This means cooking the foods above won’t diminish the content of riboflavin. However, exposure to light will. So I recommend storing riboflavin-rich foods in the dark. And using a lid if you’re cooking on the stovetop to minimize light exposure.

In addition, there are no documented cases of vitamin B2 toxicity. Because as I mentioned previously, your body doesn’t store much of it. Plus, it’s water-soluble and easily excreted through sweat and urine. So don’t be afraid of eating too many leafy greens.

Now tell me…are you eating riboflavin-rich foods? If so, what are your favorites? If not, what foods do you plan to add to your diet?

Want a deeper dive into this topic? Watch Dr. Osbornes Ultimate Crash Course on Vitamin B2 below!

One thought on “Vitamin B2 – Nutrients Deficiencies & Gluten”