Can Gluten Cause Chromium Deficiency?

Chromium is a mineral and its claim to fame comes from the role it plays in regulating blood sugar. So let’s first walk through how it performs this job and discuss other roles it plays. Then we’ll talk about how gluten causes chromium deficiency and the best foods to eat to maintain healthy levels.

When you eat a meal containing carbohydrates, your pancreas secretes a hormone called insulin. Insulin then binds to receptors on your cells, which allows the sugar (a.k.a. glucose) in your blood to enter the cell. Once inside the cell, glucose is used to make energy.

Unfortunately, many people these days are insulin resistant. This means that your cells don’t efficiently respond to insulin when it binds. They don’t open all their doors to let glucose in. So the sugar stays in your blood and your blood sugar begins to rise. If ignored, insulin resistance leads to type 2 diabetes. It’s also associated with several other conditions, including heart disease, PCOS (polycystic ovarian syndrome), obesity, non-alcoholic fatty liver disease, and high blood pressure.

However, chromium helps amplify insulin’s signal when it binds. So your cells respond and let glucose enter, which ultimately lowers your blood sugar.

Using chromium supplements to overcome insulin resistance and support diabetic patients is controversial. However, studies do exist demonstrating that chromium supplementation may help improve insulin sensitivity and lower blood sugar as well as reduce the effects of oxidative stress. Thus, chromium might also have some antioxidant properties.

Due to chromium’s effect on insulin and blood sugar, it may also maintain healthy cholesterol levels and curb your appetite. In this study, healthy overweight women were given chromium supplements or a placebo. After 8 weeks, the women in the chromium group were eating significantly fewer calories and felt less hungry when compared to the placebo group.

Since chromium amplifies the effects of insulin, your pancreas is more likely to secrete a healthy dose of insulin as opposed to an excess. This is important because high insulin levels can lead to a host of problems. Plus, when your insulin levels are within a healthy range, insulin helps maintain strong bones. This may explain why studies have found that those with type 1 diabetes (an insulin deficiency) often have low bone density. 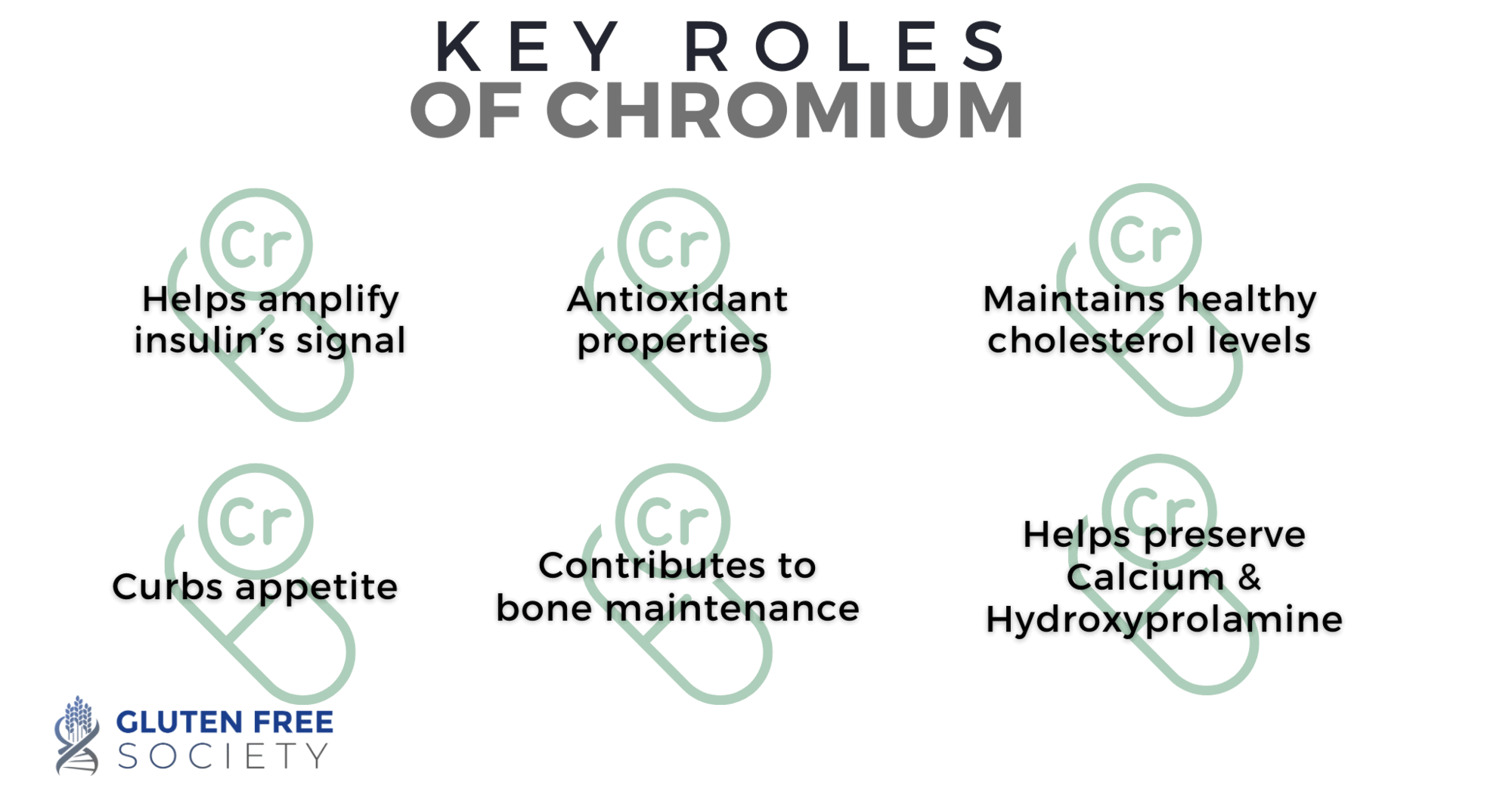 There are two main ways in which gluten contributes to chromium deficiency. The first is the effects gluten has on the gut of those with gluten sensitivity. In these cases, gluten is seen as a foreign invader. So your immune system attacks, which causes inflammation and cellular damage.

As a result, your digestive system doesn’t function properly. Digestion is hindered. Nutrients aren’t fully released from your food. And even if they are, they have trouble getting absorbed. Instead, nutrients like chromium are flushed out of your system. Plus, eating gluten often causes diarrhea, which further reduces nutrient absorption. Thus, nutrient deficiencies are common among those with gluten sensitivity.

The second potential way gluten contributes to chromium deficiency has to do with the type of foods that contain gluten. Most gluten-rich foods are highly processed. Packed with quickly digested starch from grains as well as sugar. And it’s these two ingredients that contribute to the development of insulin resistance when consumed regularly.

Plus, there’s evidence that sugar promotes the loss of chromium through urine. And processed foods don’t generally contain chromium.

Symptoms of chromium deficiency haven’t been well-defined. However, based on the fact that chromium helps regulate blood sugar, some possible symptoms and elevated risks include:

If you have gluten sensitivity, your doctor may recommend chromium supplementation or prescribe a supplement with chromium. However, it’s no substitute for a gluten-free diet. A strict gluten-free diet will help reduce inflammation and heal the lining of your gut so you can effectively digest your food and absorb chromium from all the healthy whole foods you’ll be eating instead.

If you missed our episode covering this topic, you can watch the replay here – https://www.youtube.com/watch?v=mdonBiWaQ-Q

These are the additionally mentioned supplements: