What Are The Functions of Zinc?

One of the most common nutritional deficiencies caused by gluten is zinc. If you have ever picked up a supplement for a cold, you have probably noticed that it contained zinc. And, while you may know that zinc is an important mineral for your body, you probably don’t really know or understand why. In fact, this trace mineral supports over 200 functions in the body and can have a drastic impact on your health if you happen to consume too much or too little.

What Does Zinc Do? 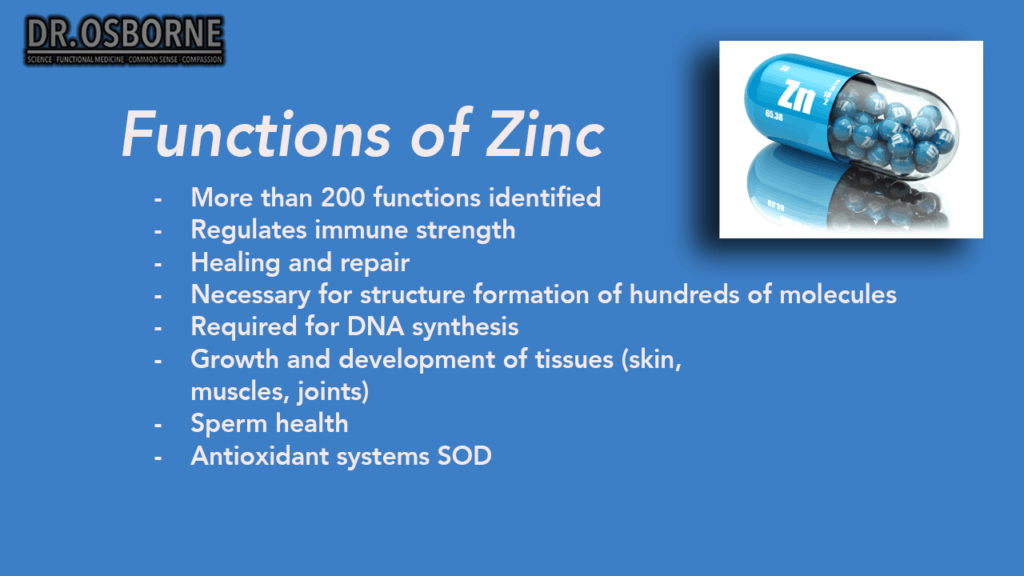 To understand the body’s need for this nutrient, it helps to know the primary functions of zinc. One of the most important jobs of zinc relates to immunity regulation. One reason it is vital in immunity is that it helps immune cells mature. Once an immune cell matures, it is able to create chemicals that can then go onto fight off bacteria, parasites, fungus, and viruses. 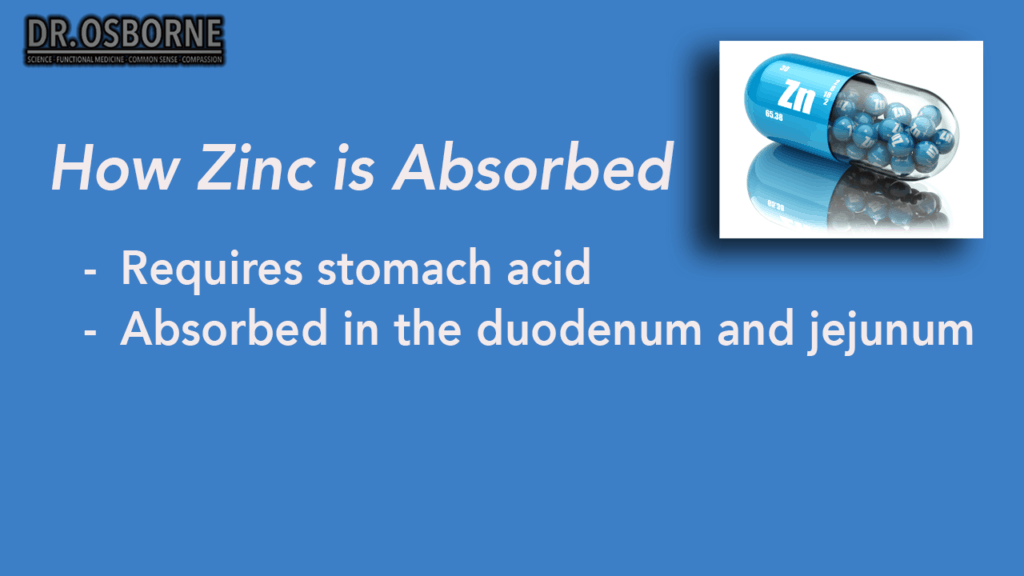 Next to immunity, zinc plays a significant role in the process of healing and repair of the body. While this may pertain to an injury, it also refers to the body’s continual process of ridding itself of dead cells and replacing them with new ones. Zinc is able to help produce the proteins that create a structure or backbone for collagen, soft tissue, and muscle tissue, helping to replace the dead cells that have been discarded. 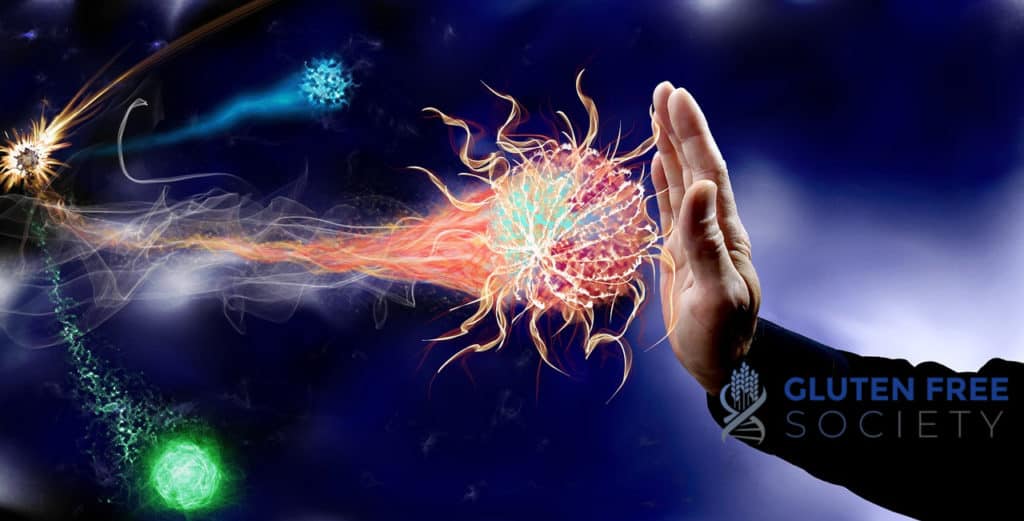 It regulates the structure and shape of proteins within the body, ultimately giving them their function. If a protein has an abnormal shape or structure, it does not work and cannot do its job properly. Lastly, in the healing and repair process, it also helps replicate and produce new DNA, through the process of DNA Synthesis, which is also a necessity in creating new cells.

While we often hear of it being related to immune health, it also plays a significant role in reproductive health for both men and women. For men, zinc plays a role in creating the sperm tail, preserving and protecting the sperm, and aiding in sperm speed, function, and motility. In women, it helps with the production and health of the egg. Infertility issues resulting from a lack of zinc can occur in both the male or female, not just the female which is commonly believed.

Additionally, it is vital for developing babies. If a mom does not consume enough of this nutrient while pregnant, the baby could be born with a low birth weight or a low IQ. It also plays a role in developing the skin, muscles, and joints, as well as, hormones for both men and women including estrogen, progesterone, and testosterone. 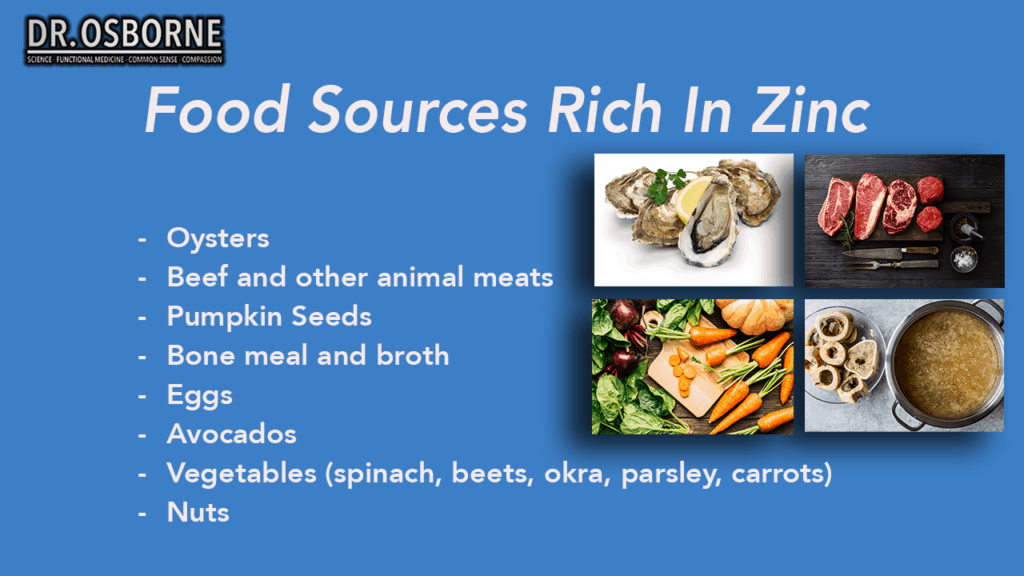 Like other important minerals in the body, it is primarily consumed through animal resources like fish, beef, bison, chicken, and eggs. If one chooses not to eat meat, it can also be found in lentils, beans, spinach, nuts, avocado, okra, carrots, and pumpkin seeds, just to name a few.

Once consumed, it is broken down by acid within the stomach and then absorbed by the proximal intestine, or the duodenum and jejunum. Surprisingly, only about 30-40% of zinc is actually absorbed by the body.

Like other deficiencies, this can often go misdiagnosed. It’s important to know the signs of a deficiency and to treat them correctly. deficiency symptoms include: 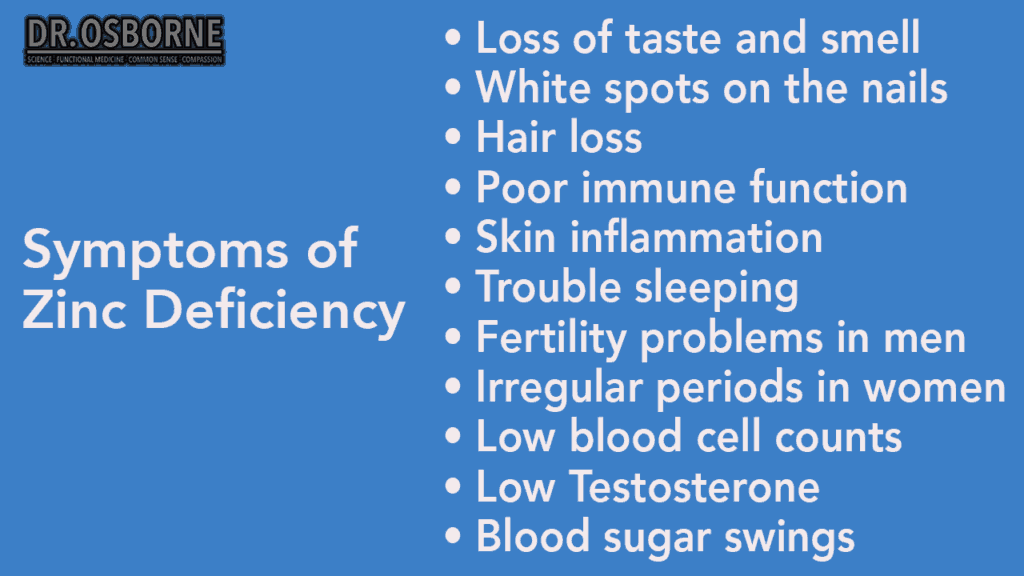 So apart from a poor diet, or one lacking in animal protein, what else can cause a deficiency? One of the main causes of a deficiency happens to be medications that deplete nutrients by affecting gut function. These medications may include blood pressure medications, steroids, estrogen-based medications, antibiotics, and even antacids.

Apart from medications, the following can inhibit absorption and cause a deficiency: 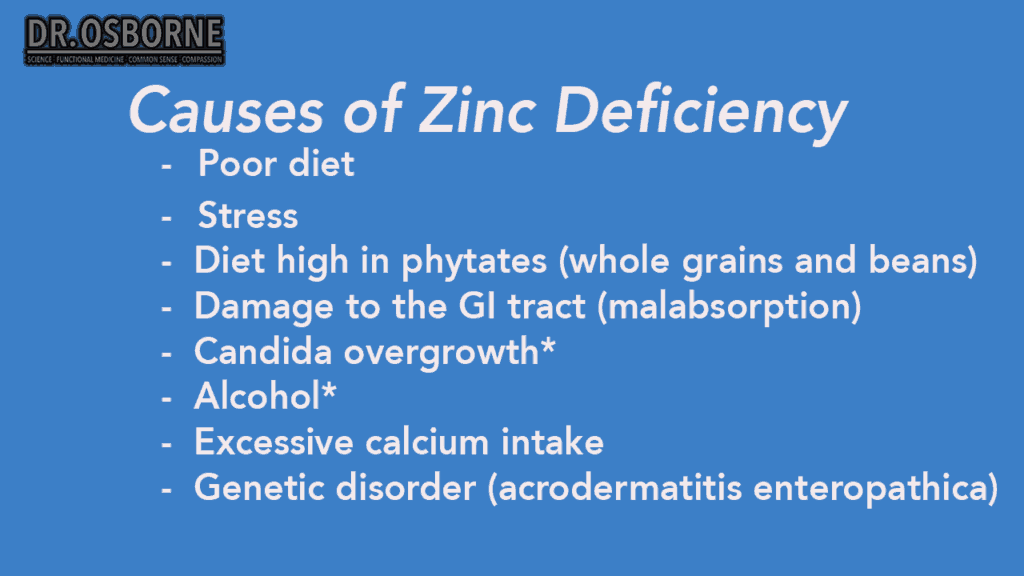 In addition to the known symptoms of a deficiency, there have been several diseases or issues that have also been linked to a deficiency. These include: skin inflammation, night blindness, increased risk of infections, diarrhea, depression, failure to thrive, infertility, bone loss, and chronic pain. 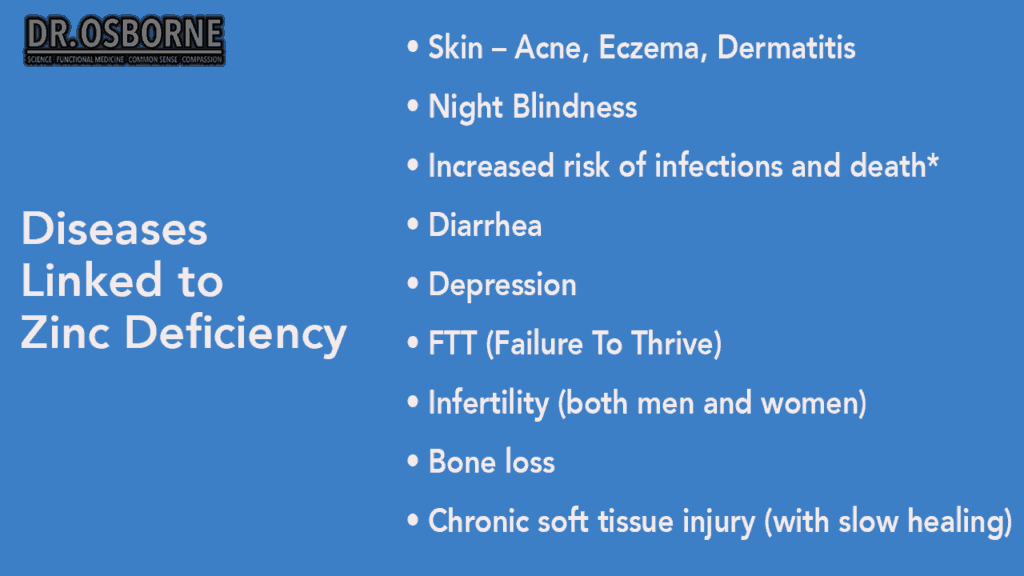 While it is extremely beneficial, too much of this nutrient, 255 mg per day, can be detrimental. This toxicity can be expressed through abdominal pain, nausea, vomiting, and diarrhea. It can also cause nausea if taken on an empty stomach. 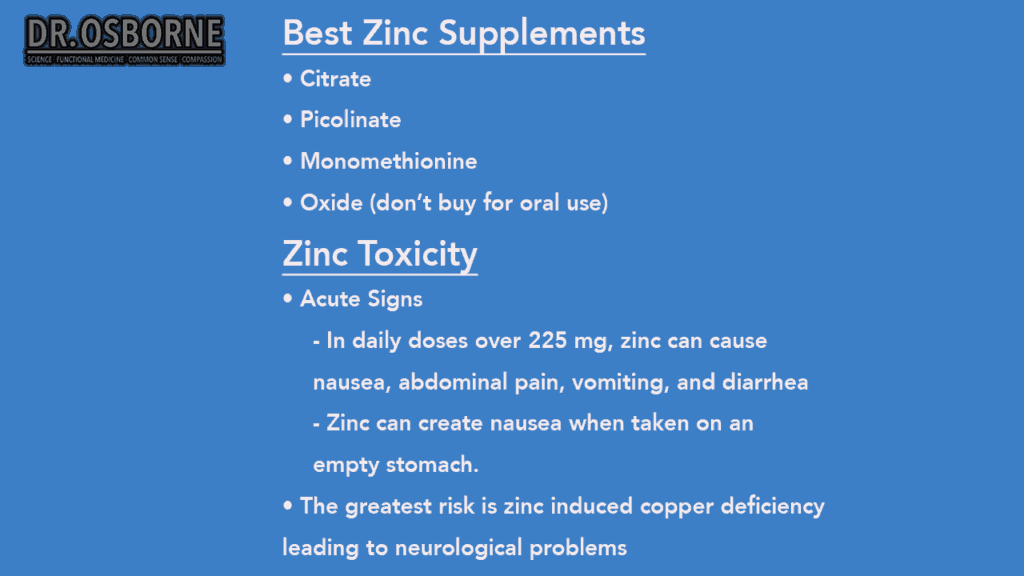 Because toxicity can be an issue, it’s important to choose the right supplement and the right amount when choosing to take this supplement.

It is a good practice to keep a 7.5:1 ratio of zinc to copper if one is going to employ supplementation. This will keep the risk of a copper deficiency at bay.

Medication That Interferes With Zinc

Some medications that you take can actually cause problems with this supplement. These medicines include: 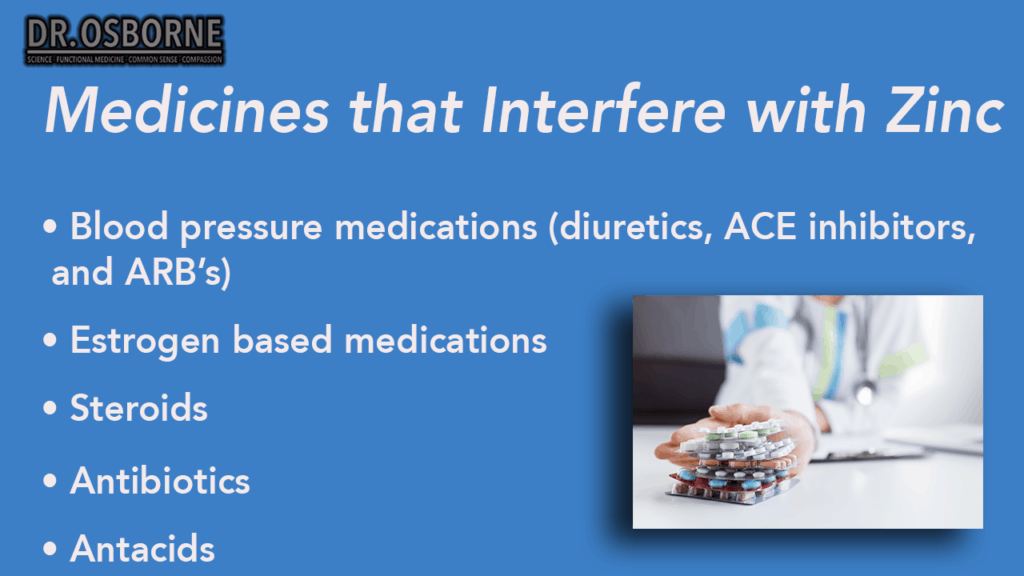 Zinc supplementation is very safe in general. Going over 100 mg per day is not recommended without having your health care provider monitor your levels. Taking 50 mg per day or less is very safe. Just make sure that when you take zinc, you eat first. Zinc on an empty stomach can cause nausea for some.

The best forms of supplemental zinc are picolinate, citrate, and monomethionine. Make sure you read the labels carefully to avoid fillers that might be gluten in disguise. As always, you can find trusted gluten free zinc supplements from Gluten Free Society.

Have you had symptoms of a zinc deficiency? Then it may be time to consider the real root of the problem. Try increasing your consumption by switching your diet and experience the positive effects from the inside out!