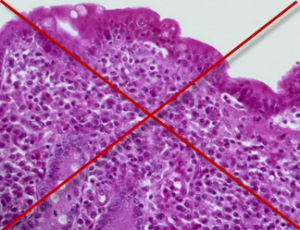 Researches tried to identify whether children with positive celiac blood tests (endomysial antibodies or EmA) but negative biopsy results for celiac disease would benefit on a gluten free diet. The children suffered with gastrointestinal symptoms similar to celiac disease symptoms. The researchers found that children who continued to eat gluten had increased symptoms and worsening of their condition.

The study provided evidence that children who are EmA positive have a celiac-type disorder and benefit from early treatment despite normal mucosal structure, indicating that the diagnostic criteria for celiac disease should be re-evaluated.

The biopsy as a gold standard for the diagnosis of gluten intolerance is dead, but doctors keep trying to cling to its corpse!

Gastroenterologists continue to foolishly use the biopsy as a gold standard despite the fact that thousands of patients have successfully gone gluten free and eradicated their symptoms of disease. Not to mention that study after study has proven how inaccurate this testing really is.

Often times never! Millions of Americans suffer with gluten sensitivity but fail to get diagnosed. For many patients, decades go by before enough gut damage occurs to show a positive biopsy. Many suffer with diseases and symptoms classically not associated with gluten. The problem is so bad that we had to create a new medical term: Non-Celiac Gluten Sensitivity. The symptoms are far reaching and typically vary from person to person. Common gluten associated symptoms and diseases are below:

Diagnosing Those Who Are Gluten Sensitive

It is important to understand that gluten sensitivity is not a disease. It is a state of genetics. Much like an allergy, avoid the food, avoid the disease or symptoms that the food causes. That being said, genetic testing is the only accurate and early way to determine whether a person should avoid gluten. Gluten induced damage can start early in life as inflammation (causing damage without symptoms). It can take years before the damage manifests as illness. Early genetic testing is the new gold standard.