Does Gluten Cause Vitamin B3 (Niacin) Deficiency?

Niacin, also known as vitamin B3, was first isolated and identified as a treatment for a condition known as pellagra, which primarily causes inflammation of the skin (dermatitis), diarrhea, and dementia. Often times referred to as the three D’s of pellagra, if left untreated, niacin deficiency can lead to a 4th…death.

Since then, niacin has been used to treat and prevent a wide range of abnormalities and diseases. So let’s take a closer look at the roles niacin plays in your body to help explain why it’s essential for optimal health. We’ll also discuss how gluten can cause a niacin deficiency as well as what foods to eat to increase your niacin intake. 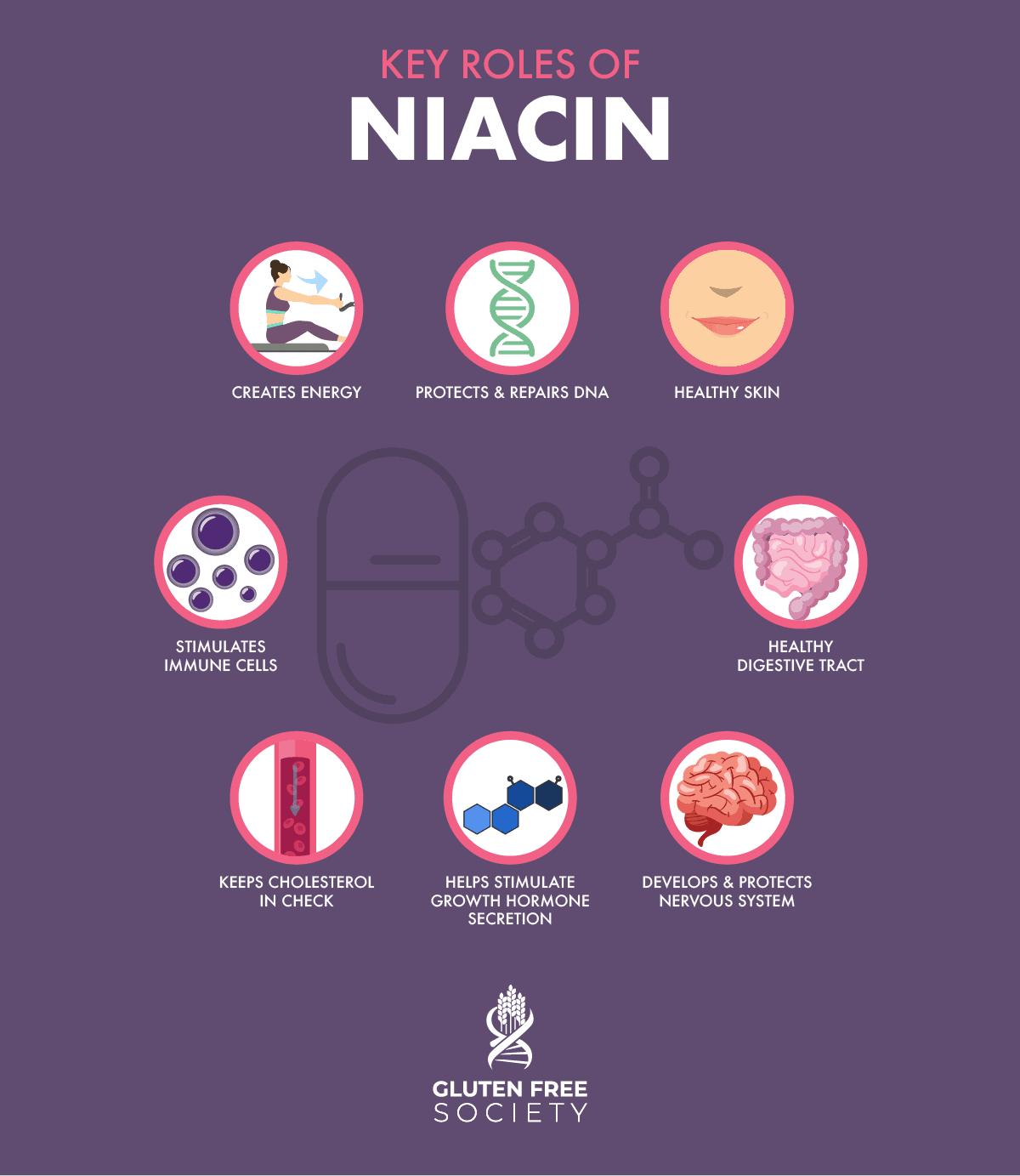 Niacin from food is converted into nicotinamide adenine dinucleotide (NAD) and NAD phosphate (NADP). These active forms of niacin are then used by enzymes to perform energy-producing chemical reactions. Thus, your cells would struggle to make energy without them.

NAD works with many other enzymes as well, including those responsible for protecting and repairing your DNA. This helps explain why deficiencies are linked to advanced aging and degenerative diseases. In fact, studies have shown that niacin acts as a powerful antioxidant and anti-inflammatory agent. Plus, research has shown that the incidence of cancer and oxidative stress increases as NAD-dependent enzyme activity decreases.

NAD-dependent enzymes are also involved in regulating other important functions, including DNA replication, insulin secretion, gene expression (turning on and off genes), and cell death.

Niacin is essential for healthy skin. It’s been studied and used widely in the skincare industry as an anti-aging treatment. Evidence suggests that many of the benefits are associated with the NAD and NADP-related enzymes and their antioxidant capacity. Studies have shown that niacin can help keep your skin hydrated, prevent age spots, reduce fine lines and wrinkles, reduce redness and blotchiness, and improve your skin’s elasticity.

NAD has been shown to activate receptors that stimulate immune cells and control involuntary movements in smooth muscle, especially those necessary to move food through your digestive tract.

Research suggests that niacin helps keep your cholesterol in check by degrading excess LDL and VLDL cholesterol as well as inhibiting the synthesis of triglycerides. This helps explain why niacin is often prescribed alone or in conjunction with statin medications to help lower cholesterol. It’s also been shown to reduce the incidence of heart-related complications in patients with diabetes.

Finally, niacin plays an important role in the development and protection of your nervous system. It’s been shown to reduce inflammation and oxidative stress in the brain associated with neurological conditions, such as Alzheimer’s and Parkinson’s disease. 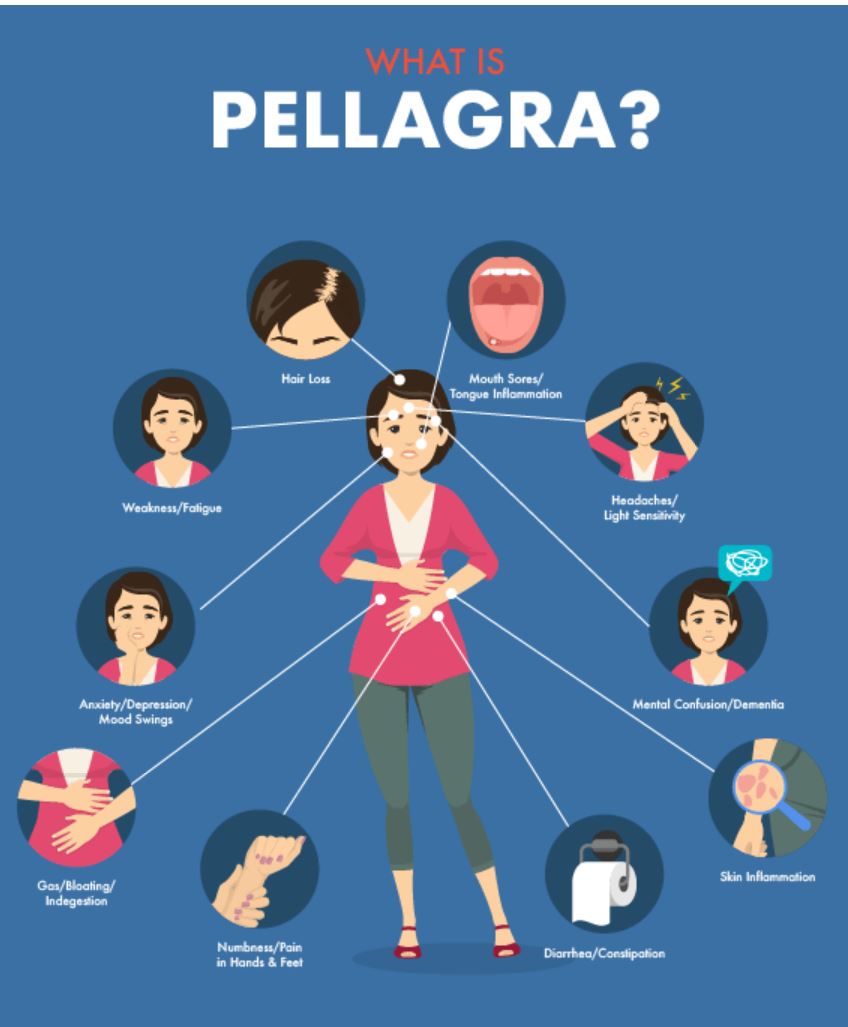 The niacin your body uses comes from food. But your liver also makes niacin from the amino acid (smallest unit of protein) tryptophan. Therefore, it’s important to consume both niacin and tryptophan.

We know that those with celiac disease experience vitamin and mineral deficiencies, especially before implementing a gluten-free diet. And intestinal malabsorption is a proposed mechanism of pellagra, a disorder caused by niacin deficiency.

In addition, diarrhea is a common symptom of gluten sensitivity. This can further contribute to a niacin deficiency as the niacin is flushed out of the body instead of being absorbed.

It’s also important to note that hormones (e.g., insulin and estrogen) modulate the pathway used to convert tryptophan to niacin. And gluten can disrupt the balance of these hormones, which I discuss in detail here.

Thus, a gluten-free diet is essential for those with gluten sensitivity to prevent pellagra. Symptoms to look out for include:

If left untreated, pellagra can be deadly. So please don’t ignore these symptoms if you have them! 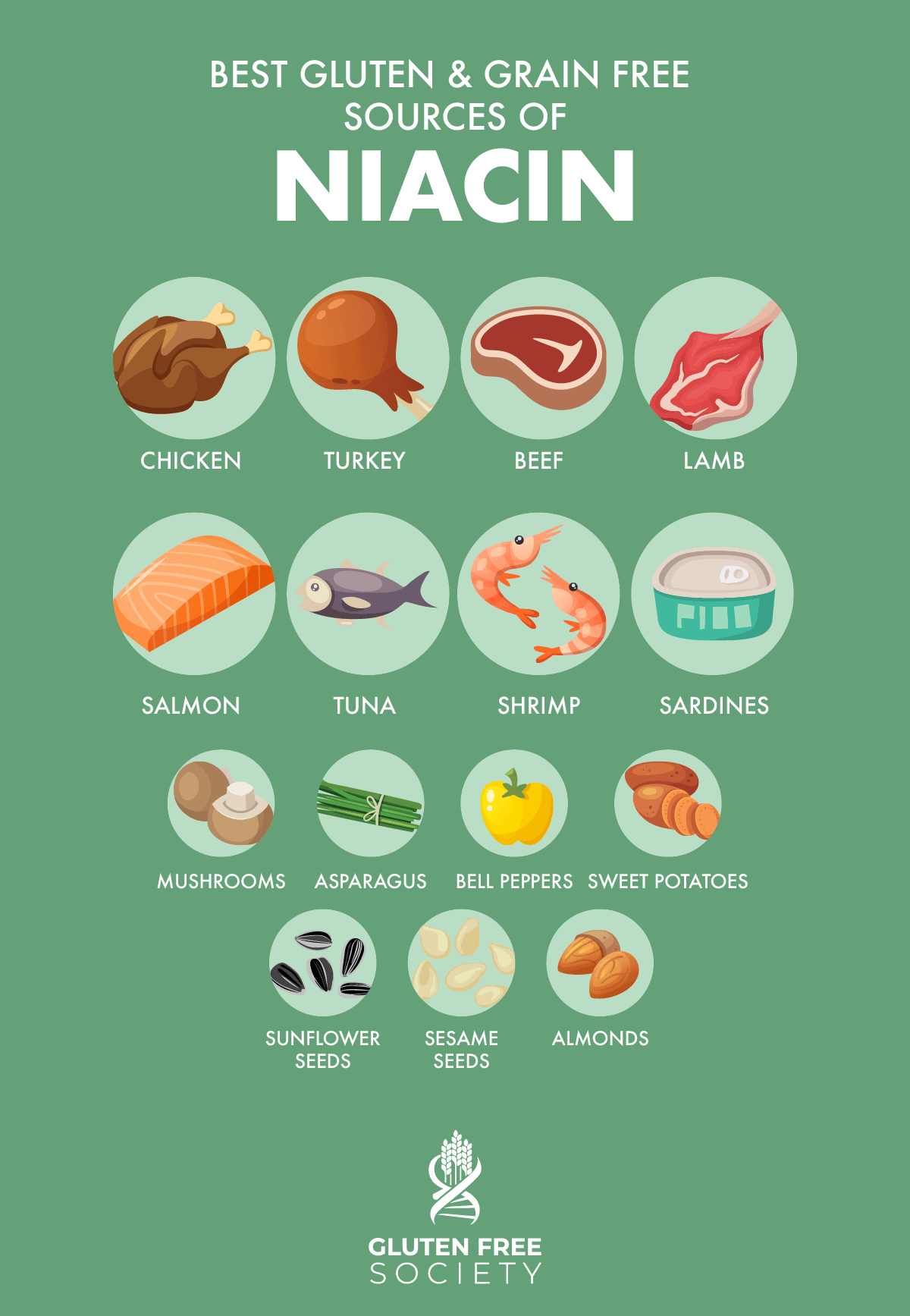 The most concentrated sources of niacin are meat and fish, including:

Not surprisingly, many of the foods listed above are also excellent sources of tryptophan. Because nature often magically packages nutrients that work together in the human body.

You’ll also find niacin in plant foods, such as:

But don’t be fooled by the niacin content in grains. Because the bioavailability of niacin in grains, especially corn, is much lower compared to meat and fish. So if you think you’re getting enough niacin by eating gluten-free corn-based products, think again! In fact, pellagra is common among populations that eat mostly corn.

Some vitamins are sensitive to heat or light, but not niacin. So it won’t degrade when you’re cooking a delicious salmon fillet or a juicy rib-eye steak.

Finally, I want to point out that it’s nearly impossible to overdo your niacin intake with food. But there are some known side effects with niacin-based medications and supplements, such as facial flushing, diarrhea, nausea, and more. So please be sure to consult with a licensed healthcare professional before supplementing.

Now tell me…which niacin-rich foods do you plan to have at your next meal?

Checkout the live discussion of this article below:

One thought on “Pellagra, Gluten, & Vitamin B3 Deficiency”