Can Gluten Cause Acne?

Can Gluten Cause Acne? 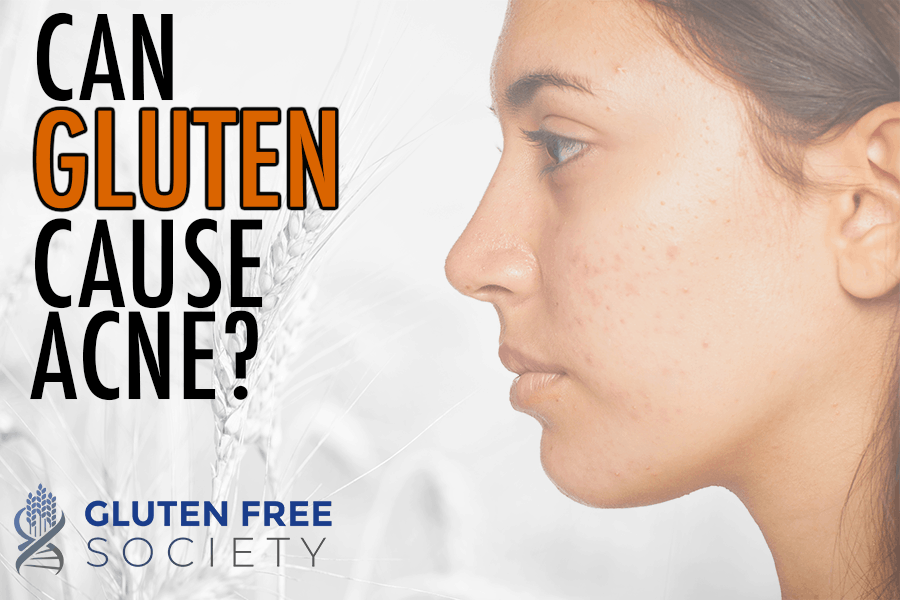 Gluten has been linked to numerous inflammatory skin conditions, but can gluten cause acne? Let’s dive into the medical research to find out. Acne is an inflammatory skin condition. Essentially, pimples form when hair follicles get clogged with dead skin cells and oil (a.k.a. sebum). And if the clogged follicle becomes infected with bacteria, swelling and redness occur.

Dermatologists treat acne more than any other condition. In fact, it’s estimated that over 90% of the world population experiences acne at some point in their life. Most people are embarrassed by their acne, which can lead to anxiety, depression, low self-esteem, and more.

The billion-dollar beauty industry would have you believe that acne is caused by not properly caring for your skin with an assortment of lotions and potions. And the medical industry pushes harsh treatments, such as antibiotics and topical retinoids.

However, beauty products and medications only address the symptoms. Sure, they may reduce redness, swelling, bacteria infections, and oil production. But they don’t solve the root cause of the problem. Because acne goes much deeper than the surface of your skin.

Now, there’s controversy in the medical field about whether or not your diet plays a role in the development of acne. But I’m here to tell you with certainty that it does, based on science as well as my professional experience over the past several decades.

Even gluten, a group of storage proteins found in grains, can contribute to chronic breakouts. So let’s take a closer look at the possible connections…

There are a handful of nutrients that have been well-studied and found to be essential for healthy, clear skin. And many people with gluten sensitivity are deficient in these nutrients due to gut inflammation and malabsorption. Can gluten cause acne? It can if it leads to the nutritional deficiencies below. In addition, a gluten-rich diet can also contain inadequate amounts of these skin-supporting nutrients.

Zinc is a mineral found in all tissues throughout the body. Most zinc is found in your skeletal muscle and bones, but your skin is third in line.

Zinc plays thousands of roles in the body. Literally. But in the skin, two of its primary roles involve the creation of keratinocytes and the prevention of inflammation.

This is important because keratinocytes are part of your immune system. They’re your body’s first line of defense against microbial infections. And as I mentioned above, bacteria that live on your skin can infect clogged pores and cause redness and inflammation.

Now, skin cells turn over frequently. So it’s important to consistently replenish your supply of zinc. However, this can be hard when eating a gluten-rich diet.

Zinc absorption is hindered for those with gluten sensitivity due to gut inflammation as I mentioned previously. Plus, diarrhea is a common symptom of celiac disease, which further contributes to malabsorption of zinc as well as zinc loss through the bowels.

Gluten-containing processed foods don’t usually contain significant amounts of zinc, resulting in an insufficient intake. Zinc from grains is also less bioavailable than zinc from animal sources. In addition, whole grains contain high concentrations of phytic acid, which binds to zinc in the gut and prevents it from being absorbed.

Another interesting point is that your body’s demand for zinc peaks in adolescence due to its role in growth, development, and reproduction. And studies have shown that teens have the greatest risk of zinc deficiency due to the demand and quality of their diet. This may help explain why almost 95% of teens battle with acne. However, adult acne is on the rise and studies associate it with Western diets, which I’ll cover in more detail shortly.

Experimental studies involving supplemental zinc to treat acne have reported mixed results. Some demonstrated benefits while others did not. This may be due to a variety of factors, such as a low sample size, dosage, or form of zinc.

It could also be related to a person’s diet, lifestyle, or zinc status. For example, if a person is zinc deficient, zinc supplementation may be more effective. On the other hand, if a person has a good supply of zinc, supplementing with it may not provide any additional benefits. Thus, all of these factors must be considered.

Each group has specific roles. For example, carotenoids act mostly as antioxidants and anti-inflammatory agents.

Retinoids support the immune system and inflammatory response, especially in the digestive tract. More specifically, retinoids help prevent the immune system from overreacting and causing inflammation. Retinoids are also found in the sebaceous glands of skin cells and play a significant role in skin health.

Retinoids stimulate the activity of keratinocytes. This in turn promotes the creation of healthy new skin cells, provides a protective barrier against infections, prevents skin dehydration, and promotes skin elasticity.

The researchers also tested retinol concentrations in the skin. And again found lower levels in those with acne than those with healthy skin. In addition, carotenoids levels did not differ between groups. This data suggest that acne is associated with retinol deficiencies, but not carotenoids.

It is true that some carotenoids can be converted into retinoids. But this conversion doesn’t always happen efficiently. Especially in those with digestive dysfunction, which can be caused by gluten.

The role retinoids play in preventing acne is well known. That’s why synthetic forms are the most commonly prescribed treatments by dermatologists. But, if you have gluten sensitivity, these medications won’t solve the root of the problem. They won’t help heal your gut, reduce systemic inflammation, or increase your nutritional status. However, a gluten-free diet will.

Vitamin E is delivered to the skin through the sebaceous glands. It’s a powerful antioxidant that helps prevent the oxidation of oils produced by the skin. This is important because oxidized oils may exacerbate inflammatory acne.

It’s also worth noting that a study compared zinc, vitamin A, and vitamin E levels among those with acne and those without. They found significantly lower concentrations of these nutrients in the acne group. Further, vitamin E and zinc levels were linked to the severity of acne.

Similar to the other nutrients I’ve discussed, vitamin D levels are lower in those with gluten sensitivity as well as those with acne. And the lowest levels have been associated with more severe cases.

Vitamin D is synthesized in your skin as a result of sun exposure. And it acts more like a hormone regulating certain functions, including some aspects of immunity and inflammation.

For example, P. acnes is a type of bacteria that causes inflammation associated with the formation of infected pimples. And a study has shown that both vitamin A and D can prevent this inflammatory response. This may explain why treatment with vitamin D supplementation has been reported to help reduce inflammation in those with acne.

Vitamin B5, also known as pantothenic acid, plays a role in the creation of new keratinocytes as well as protection against bacterial infections. It also helps keep the skin hydrated and soft. And scientists believe that these features contribute to its anti-acne benefits.

For example, a study found that vitamin B5 supplementation reduced the number of facial pimples by 67% in patients with acne over the course of 12 weeks.

In this article (link to hormone article), I explain all the ways in which gluten can cause hormonal imbalances. And it’s relevant to this discussion because changes in hormones are believed to be a trigger of acne, especially within a class of hormones known as androgens.

Androgens are hormones responsible for male traits. Under normal circumstances, they’re found in both men and women in varying concentrations. However, an excess of androgens has been associated with acne. It’s suggested that an excess causes your skin to release more oil, which can lead to enlarged pores and bacteria growth.

One last topic I want to cover is the association between eating gluten-rich processed foods and acne. When consumed often, these foods cause inflammation and may even increase your risk of autoimmune disease (e.g., celiac disease and type 1 diabetes).

Because they’re packed with starch, sugar, and vegetable oils, frequent consumption also causes your insulin to rise. And insulin triggers an increase in the production of androgens, which increases oil secretion as I mentioned above.

Studies have shown the people eating a nutrient-rich whole foods diet experience a lower prevalence of acne than those who eat more processed foods. Scientists have also studied two indigenous populations, Kitavin Islanders and Aché hunter-gatherers, with diets void of processed foods. And guess what? Acne doesn’t exist among these groups.

Can Gluten Cause Acne? Let’s Sum it Up

What you eat matters when it comes to the health of your skin. Period. Science has clearly demonstrated that certain nutrient deficiencies, hormonal imbalances, inflammation, and processed foods are closely linked to the development of acne. And all of these things are influenced by your diet as well as connected to one another.

Further, we can’t deny the fact that gluten plays a role in those with gluten sensitivity. Because gluten, which is mostly found in processed foods, causes many of the contributing factors that can lead to not only acne, but many other chronic skin conditions.

So before you spend your hard-earned money on a new, expensive skin-care regime or start a harsh medication, ask your doctor to test for nutrient deficiencies. Rethink your diet. Try removing grains. Replace them with nutrient-rich whole foods, such as grass-fed meats, wild seafood, eggs, nuts, seeds, and colorful fruits and vegetables.

In the long run, you’ll save money. And you’re more likely to heal your acne for good. A win, win!