The Ultimate Vitamin B5 Crash Course

Like other vitamins, Vitamin B5 has several names including pantothenic, pantothenic acid and pantethine. The prefix of these names, “pantos” literally means everywhere, and that is for good reason. Vitamin B5 is not only found in a number of food items, but you can also find it being added to hair and skin products.

Because it is such a common nutrient, doctors often miss it as a deficiency, which can lead to detrimental effects on the body. Among many functions, It is a precursor to Coenzyme A which is crucial for metabolism and cannot be made without pantothenic acid. 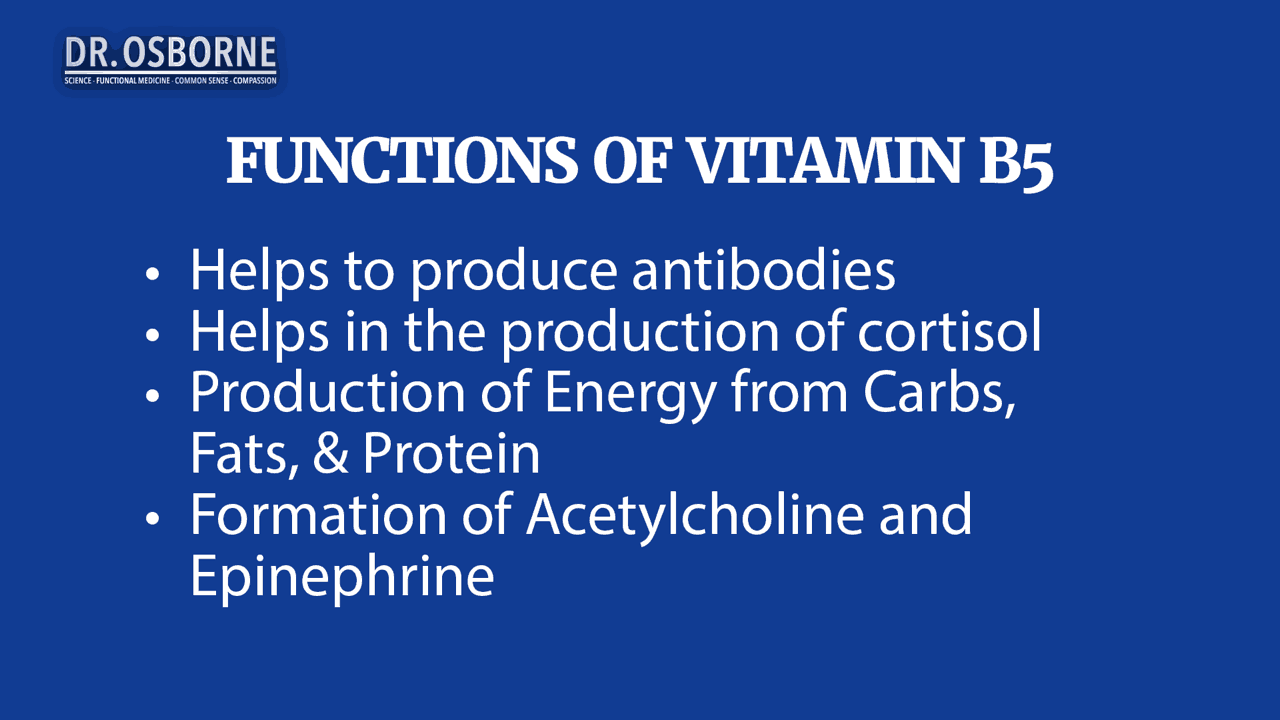 One of the vitamins many functions include the production of antibodies. These may consist of IgG, IgA, IgM, and IgE which are commonly screened during allergy testing.

If an individual is deficient in pantothenic acid, his or her antibodies may be low which can actually affect the results of allergy testing. Ultimately, the doctor could miss diagnosing an allergy because of a B5 deficiency and fewer antibodies.

Another important function of pantothenic acid is the production of cholesterol and cortisol. While many consider cholesterol a negative, it’s actually quite important for the body. It helps produce CoQ10 and Vitamin D, as well as testosterone in men and estrogen and progesterone in women.

Cortisol, on the other hand, helps the body to fight inflammation. Without adequate levels of cortisol chronic inflammation may result which can lead to:

Energy Production of Vitamin B5

Like several of the other B-vitamins, B5 is also necessary for obtaining energy from protein, fats, and carbs. As mentioned, pantothenic acid is required to produce Coenzyme A which helps the body convert proteins, fats, and carbohydrates into energy, also known as ATP or adenosine triphosphate. If an individual is feeling chronically tired or hungry, he or she should consider incorporating more Vitamin B5 into his or her diet.

Another major function of pantothenic acid is that it helps to form acetylcholine and epinephrine. Acetylcholine is a neurotransmitter that allows for communication between the nerves. This allows for proper movement and functioning of the body. Without it, an individual may experience neurological fatigue in which the nerves and muscles are not firing together.

Epinephrine, on the other hand, also known as adrenaline, is a neurochemical that is also formed by Vitamin B5. It is necessary to make norepinephrine and dopamine. Dopamine is critical in helping to maintain neural communication, as well as keeping the body balanced and toned. Without it, there can be neurological trouble like a shuffling gait and uncontrollable tumors, as seen in those with Parkinson’s. 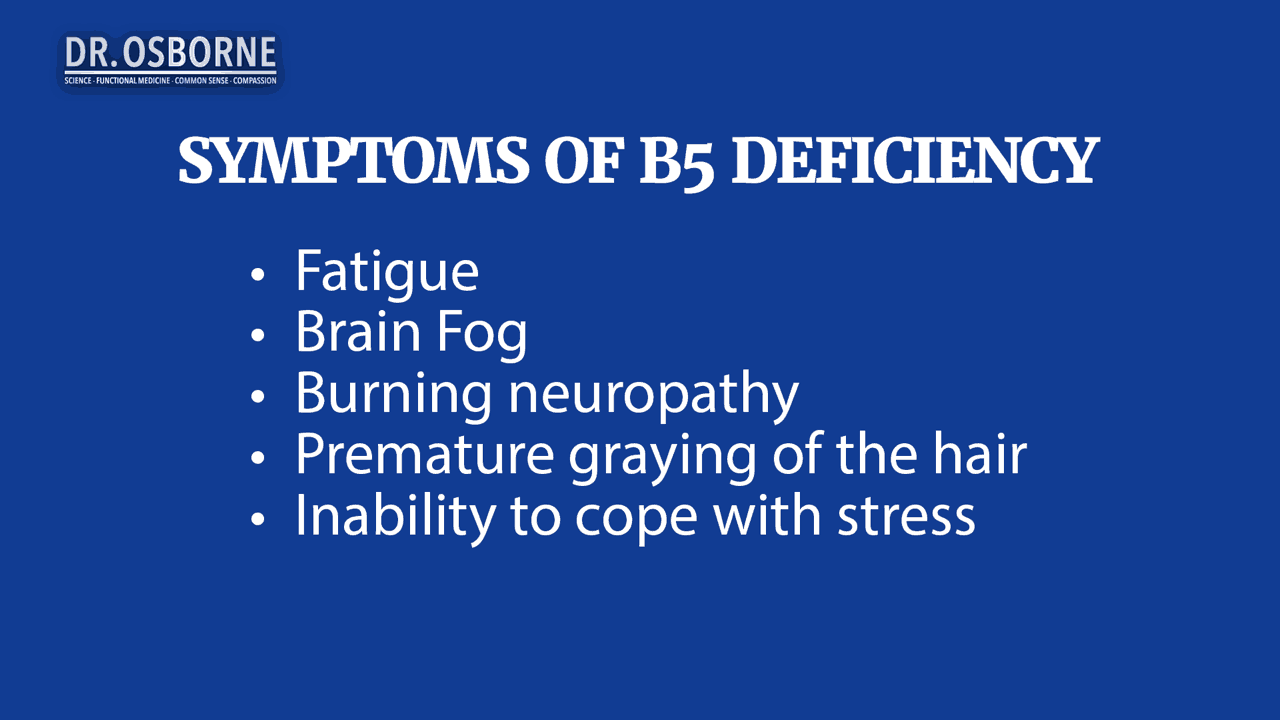 As mentioned, because this is such a prevalent nutrient, many doctors miss it when diagnosing for deficiency. In fact deficiency of B5 is much more common than it’s given credit for. Signs of deficiency include:

Causes of Vitamin B5 Deficiency 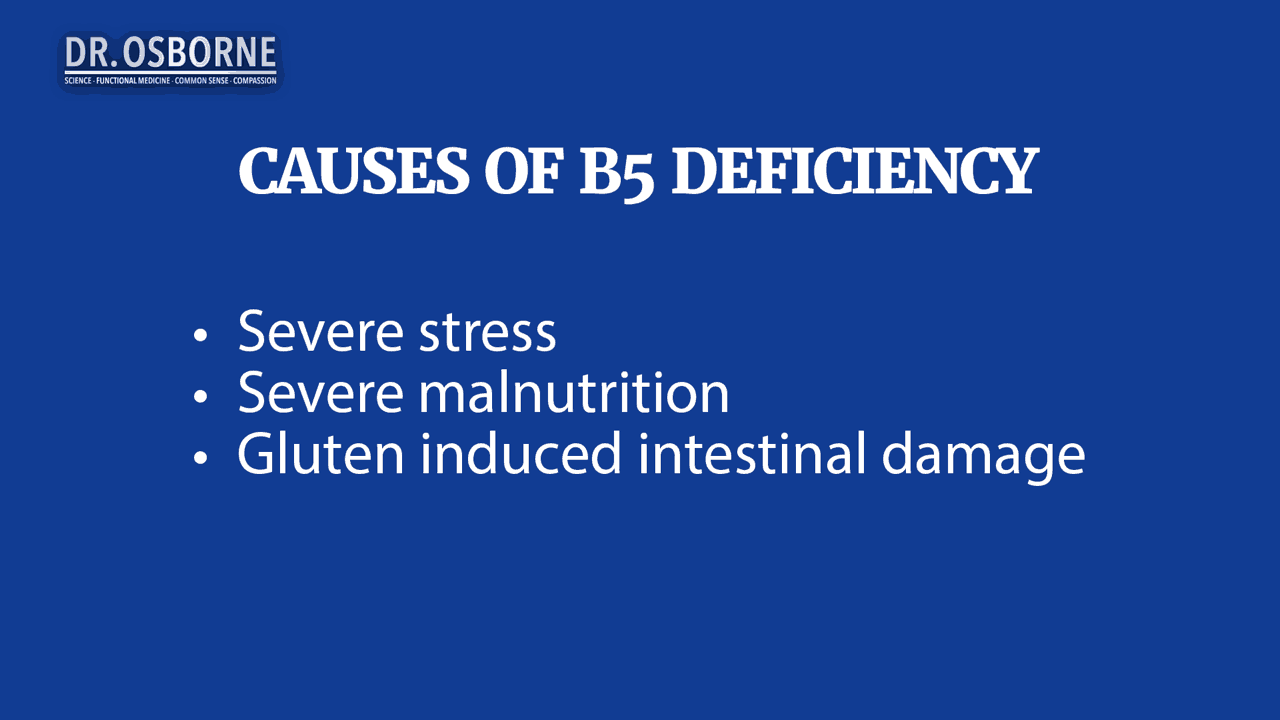 While the symptoms of deficiency are important to know, it is also important to find the root of the problem. With a deficiency in pantothenic acid, there can be several causes including:

Sources of Vitamin B5 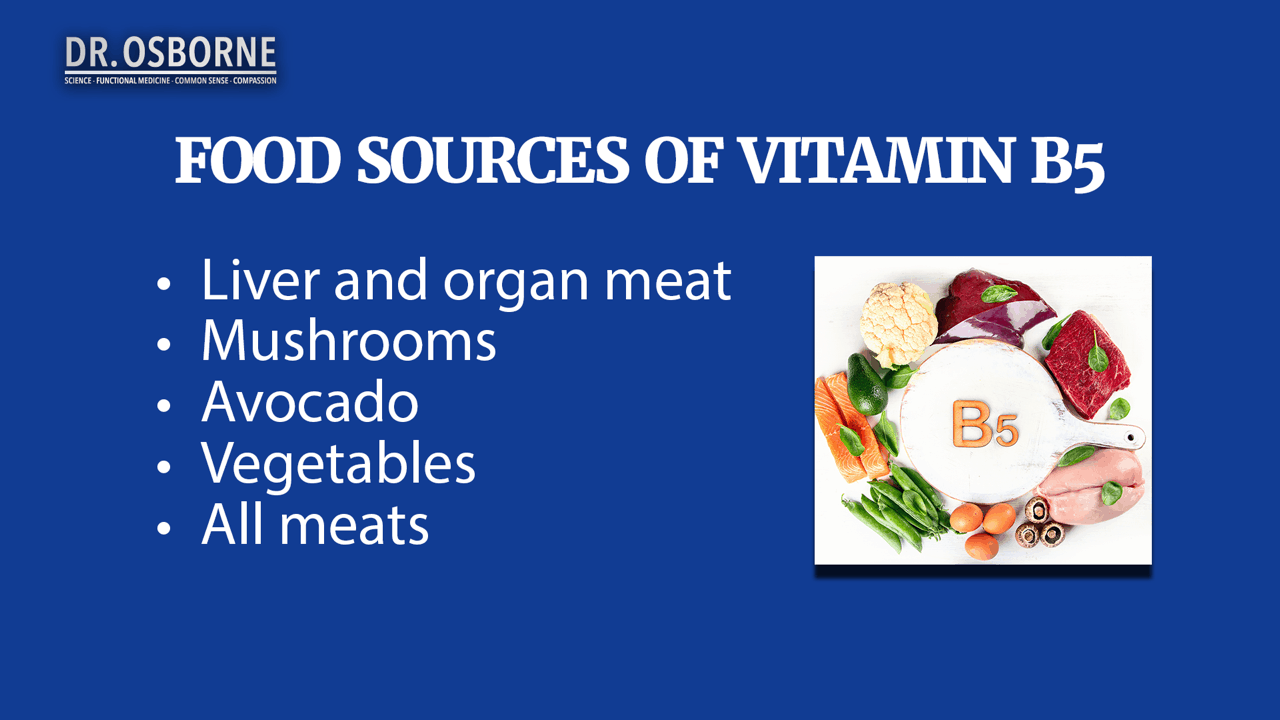 Again, as the name connotes, pantothenic acid can be found in just about all foods. Some high-quality foods include organ meats, vegetables, fruits, nuts, and mushrooms.

There really is no toxic level of Vitamin B5, unless consuming more than 20g per day which is rare and only possible if supplementing. If high doses are consumed, some gastric nausea can be expected.

Apart from normal functions within the body, some have found pantothenic acid to be of great use in the following areas:

While most can correct a deficiency without supplementing, for those that do require it, it’s important to work only with a highly trained physician. It’s best to start with 250 to 500 mg per day, but possibly more if the deficiency is severe.

One word of caution, however, is that Vitamin B5 and Biotin are both absorbed at the same receptor sites. Therefore, taking too much of one can cause a deficiency of the other. Be sure to heed proper dosing amounts and avoid megadosing.

Don’t Rule it Out

It’s important to note that even with a nutrient as prevalent as Vitamin B5, deficiencies still occur. When experiencing a physical issue, be sure to rule out all deficiencies, not just those that are common. While researching on your own is beneficial, always work with a well-trained, reputable doctor before making drastic changes to the diet or consuming supplements.

2 thoughts on “The Ultimate Vitamin B5 Crash Course”