The Ultimate Crash Course on Vitamin A

While most people are familiar with the B Vitamins, as well as Vitamins C and D, very few think about Vitamin A and the impact it has on the body. The reality, however, is that it is extremely important and crucial for the functioning of several organs. Without it, your eyes, gut, and even lungs could face detrimental effects. 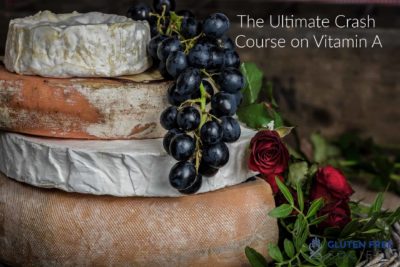 The First of the Vitamins

Vitamin A was actually the first of all vitamins discovered, therefore receiving the designation of “A.” It is fat-soluble and has a greater potential for toxicity; however, reaching dangerous levels is still quite rare. Most individuals would need to consume about 25,000 IUs over an extended period of time to start feeling any negative effects.

Vitamin A vs. Carotenoids

When considering vitamins, most think about finding them in fruits and vegetables. However, Vitamin A, is quite different, being found primarily in fats. Popular sources include animal fat, milk fat, like in cheese and butter, and even cod liver oil. Because the liver stores this nutrient, animal livers provide an excellent source of this nutrient.

In addition to these, many people believe that it can be found in sweet potatoes, bell peppers, carrots, and other brightly colored vegetables. However, those actually contain carotenoids which are pro-Vitamin A, but not the nutrient itself. Taking in carotenoids can be beneficial, however. If an individual has a healthy gut, he or she can produce about 5,000 IUs of Vitamin A from the carotenoids that are consumed. So while not a direct source, these are still excellent to eat.

Because sources of Vitamin A are fat-based, the absorption of this nutrient can be more challenging. First, it’s important to have a healthy gallbladder. The gallbladder stores bile that allows fat to be broken down and the nutrient to be received. Those who have had their gallbladder removed will likely need a supplement, like ox bile, to properly digest fat.

Additionally, those with a gluten sensitivity or absorption issues may also struggle to get the Vitamin A they need. If the nutrient is absorbed properly, it must have a carrier protein called retinol-binding protein to take it where it needs to go. This protein is zinc-based; therefore, if a person is deficient in zinc, he or she will not be able to make that carrier protein and this nutrient will not get to its destination, making that deficiency likely as well.

How Vitamin A Functions

With each role or function in the body, there is typically a nutrient supporting it; and, with Vitamin A, it’s no different. It’s amazing how something consumed in fat can play such a pivotal part in keeping the body operating well. One of the main roles that this nutrient plays is in regenerating epithelial tissue.

Epithelial tissue is what covers or lines many organs in or on the body, including the skin, lungs, GI and urinary tracts. Not only does this nutrient keep these linings in excellent shape, but it helps produce the mucus that is in the gut, lungs and sinus cavities. This mucus allows these organs to work properly and provides immune barriers to protect the body from harmful colds and flu.

Another major role of Vitamin A is in cell growth, differentiation, and apoptosis. When cells are created, this nutrient assists them in determining what kind of cell they are and their function through a process of differentiation. If they are not properly differentiated, they may become malformed or develop in the wrong location resulting in cancer.

Furthermore, cells have a lifespan with a specific end date. Vitamin A initiates the self-destruction sequence of cells when their time is up in a process called apoptosis. Not having it to differentiate cells and initiate their apoptosis process can have major, long-term, and harmful effects on the body.

As if epithelial regeneration, cell differentiation, and apoptosis weren’t enough, Vitamin A has these functions as well:

In individuals who are not consuming enough animal or milk fat, a deficiency in Vitamin A is not uncommon. Because it does so much to support the function of the body, without it, the body can suffer greatly. One of the first issues an individual may notice is related to the skin. The skin may heal slowly, be inflamed, or have raised, red bumps.

Additionally, a deficiency can affect the lining and mucus production of the urinary tract, gut, and lungs leading to chronic UTIs, chronic upper respiratory infections, colds, and even influenza. Hypothyroidism may also result from deficiency. Lastly, in developing babies and young children, a lack of this nutrient can cause birth defects, cleft palates, or even stunted growth.

As previously mentioned, even though Vitamin A is fat-soluble, it is still difficult to reach toxic levels when consuming this nutrient. However, if one does experience toxicity, he or she may have these indicators:

If an individual does choose to supplement, it’s important to keep doses around 12,500 IUs. However, if any of the signs of toxicity begin to appear, consult a doctor before proceeding with further supplementation.

Most people have a general knowledge of vitamins and minerals, but it’s important to really dig into their impact on the functioning of the body. An issue you may be facing could simply be caused by a deficiency which necessitates only a change in diet or supplementation. Staying informed and learning more about how the body works and how to adequately fuel it is the first step in healing your body and ultimately changing it for the better!