If you’ve ever looked closely at the table salt you purchase from the store, you will notice that most of the time, the labeling will say it has been iodized or fortified with iodine. That is because in the early 1900s scientists realized a need to fortify the diet with iodine to prevent the harmful symptoms of deficiency. While this is not as much of an issue in industrialized countries today, it’s important to know why this nutrient is essential and one the body cannot function without.

The Function of Iodine 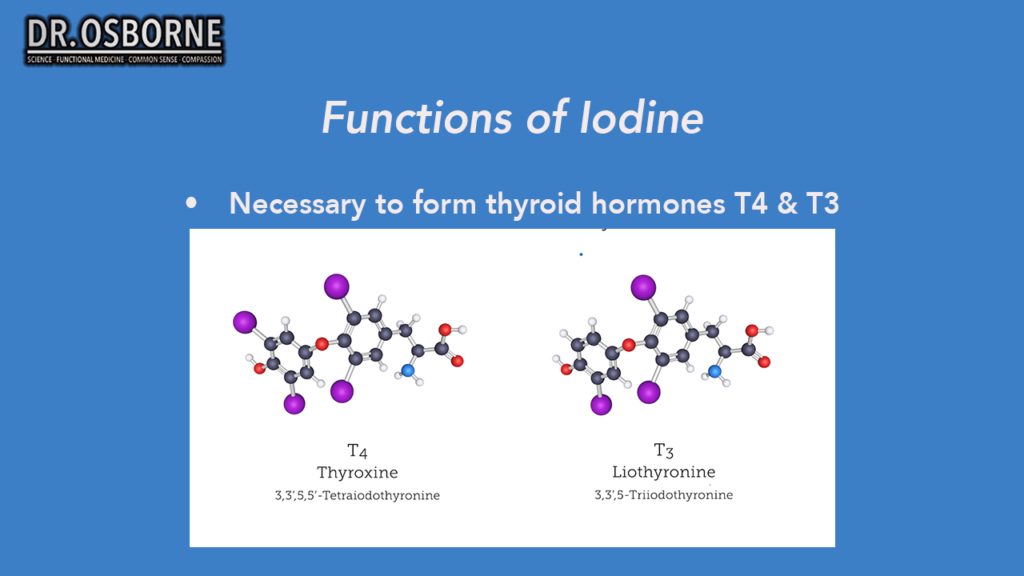 In short, this nutrient is necessary to produce T3 and T4 which are thyroid hormones. These not only regulate growth, but they are vital for metabolism, generating energy, and communicating with DNA about how cells are supposed to grow, heal, and repair. T3 is an active thyroid hormone with three molecules of iodine, while T4 is inactive and contains four molecules.

Once TSH (thyroid-stimulating hormone) is produced by the brain, it travels to the thyroid telling it to produce T4 and to trap more of this nutrient in the diet in order to produce T3. T3 then communicates to DNA to upregulate the metabolism. This process also requires Selenium, Tyrosine which is a protein, and Vitamins B2 and C. Without all of these, this process will not work correctly. 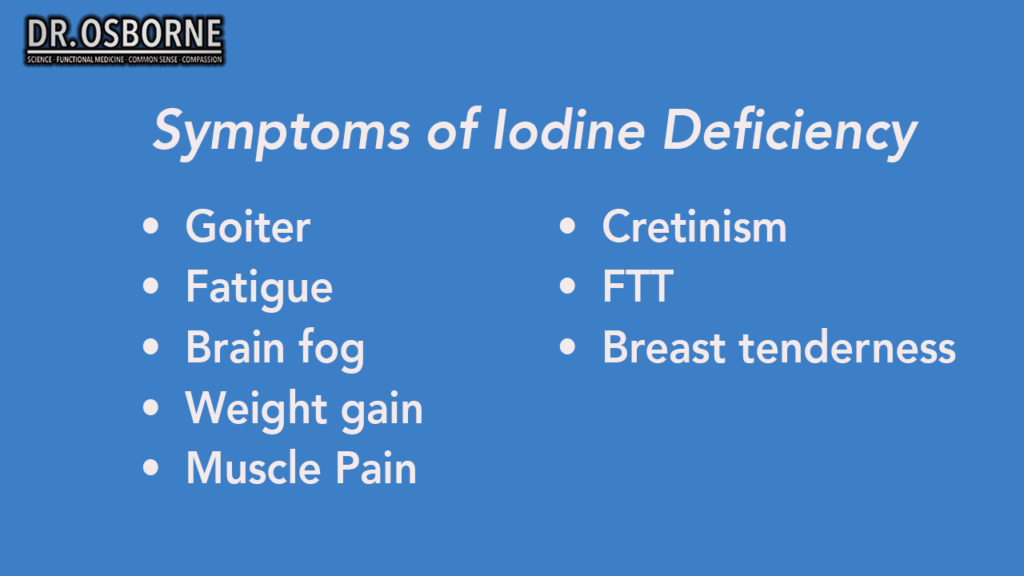 While iodine deficiency is one of the most preventable problems in the world, especially with it being added to salt, when tested, most levels in the salt aren’t sufficient. Therefore, it’s best to not rely on this as a primary source. Becoming deficient in this nutrient can cause many issues, including:

Because many of these are the same symptoms associated with thyroid problems, doctors will often prescribe medication without truly getting to the root of the problem. It is best to request testing for a deficiency prior to accepting medication and treating a condition that isn’t actually present. 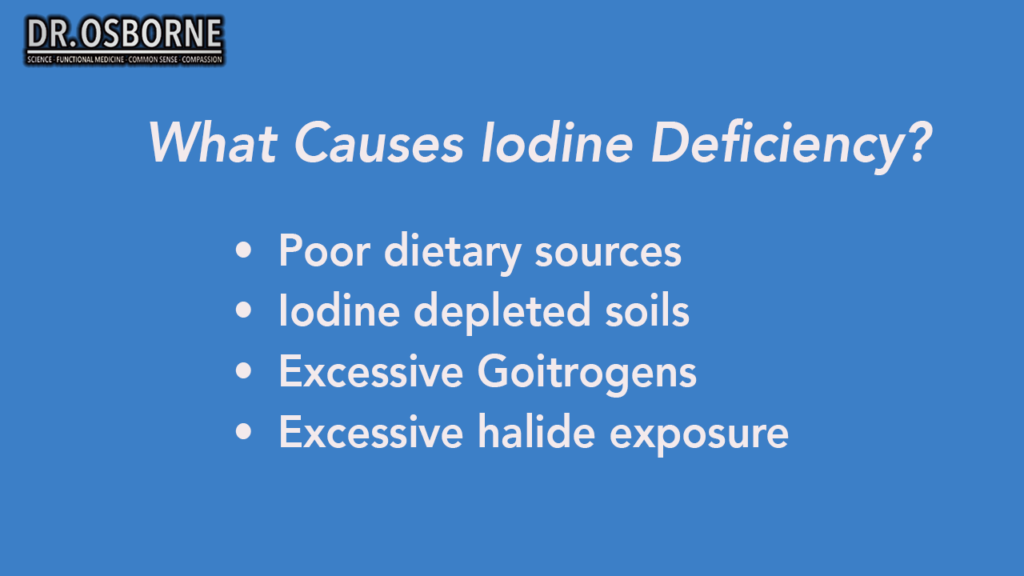 So apart from eating a poor diet where very little to no iodine is present, what can actually cause a deficiency? One cause of deficiency that most people don’t think about is depleted soils.

Crops will often take on some of the nutrients and minerals contained in the soil they are grown in. If the soil is depleted of iodine, food grown in it won’t be as nutrient-dense as it could be. 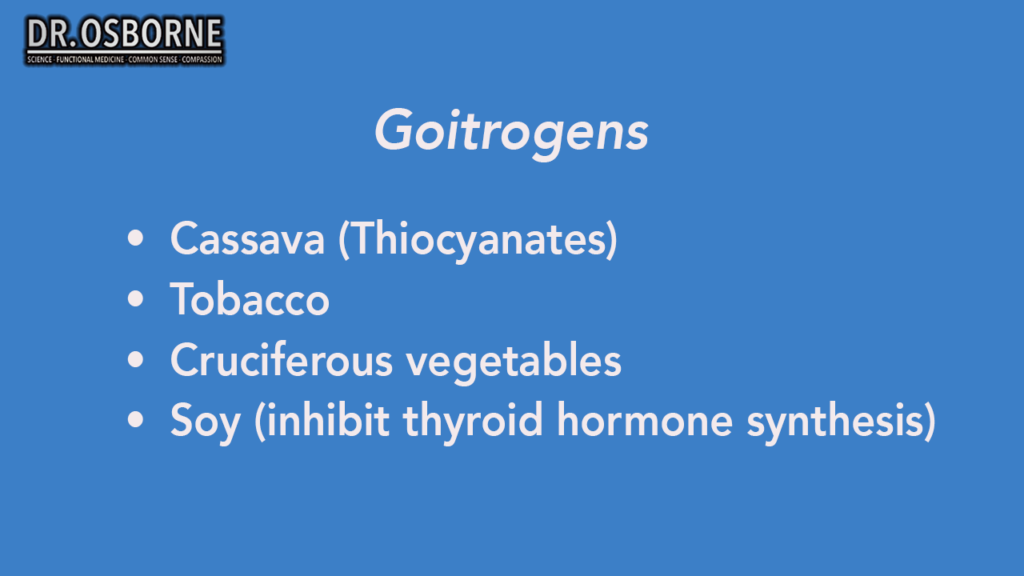 Another major cause of deficiency is excessive goitrogen exposure. These are substances that can actually inhibit thyroid hormone formation, often by preventing the uptake of iodine. These include:

Similarly, excessive halide exposure can also cause deficiency because they too compete for uptake into the thyroid gland. Specifically, these include the halides fluoride, chlorine, and bromine. Issues can occur when: 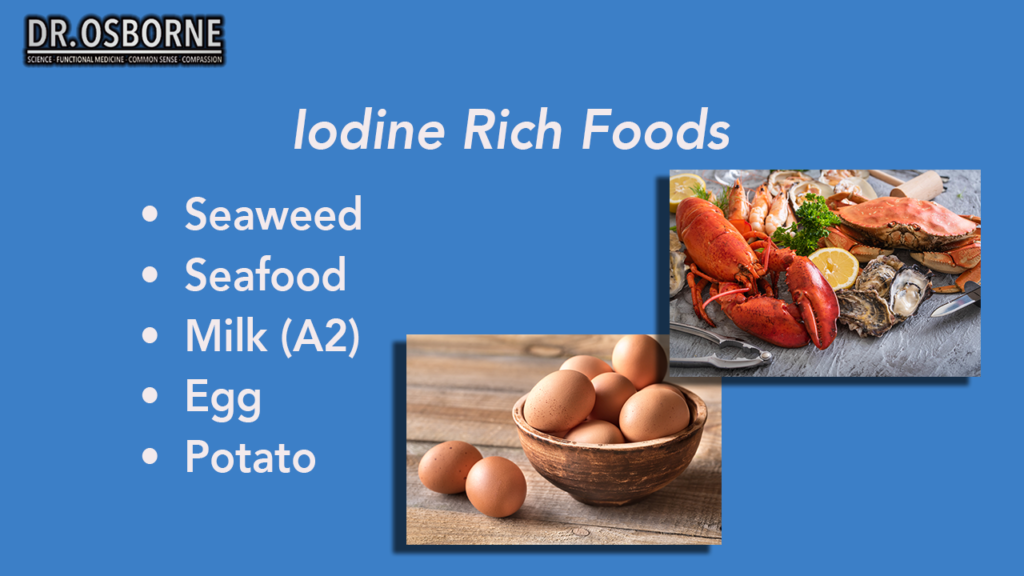 As mentioned, while iodine can be obtained from iodized salt, it’s not the best source when looking for adequate, consistent amounts. Instead, there are many great sources in food found in most kitchens. These include milk (preferably A2 milk), eggs, potatoes, chicken, and seafood like fish and shrimp.

While maybe not as common, one of the richest known sources is actually seaweed. Additionally, well water, if the well is dug deep enough, can be a great source as well. 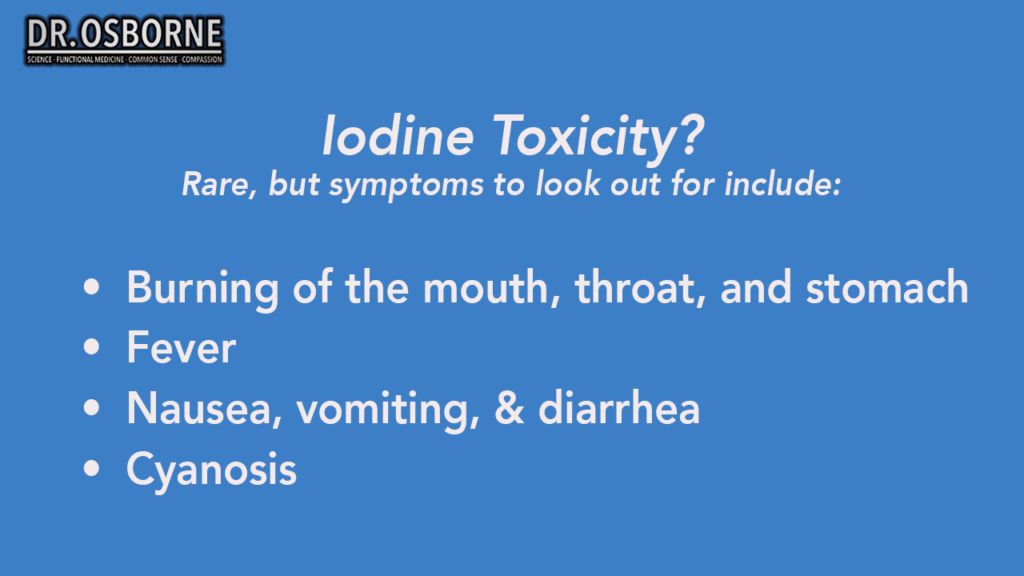 While toxicity is not generally an issue with iodine, it can still occur. To get to this point, an individual would need to be taking several grams daily. The symptoms may simulate hyperthyroidism but quickly dissipate with a cessation in consumption.

If toxic levels are reached, an individual may have burning of the mouth, throat, and stomach, fever, nausea, and vomiting. Cyanosis, or blue discoloration of the skin, could also occur. Additionally, while some individuals may be allergic to the preparation of iodine, it’s actually impossible to be allergic to the nutrient itself.

If suspicious of a deficiency, it’s best to get tested in order to start treatment right away. Some doctors will choose to run a blood test or skin test, but these are not the most accurate. The most helpful test is a loading test, which involves testing the urine.

For this method, a patient will give a urine sample in the morning as a baseline and will then consume a 50mg dose of iodine. Urine will be collected and tested over the next 24 hours to see how much of the 50mg is discharged during that period. A normal individual without a deficiency will see 80-90% of that dosage come out.

If a deficiency is detected, it’s best to switch up the diet to incorporate iodine. Taking a simple multivitamin may also be sufficient for the daily dosage amount.

If an individual requires it for therapeutic reasons, anywhere from 5-50mg can be taken, but exceeding 25mg should only be done with adequate testing and medical supervision. If an individual has a thyroid condition and is choosing to supplement, it should also be noted that the TSH may be falsely elevated.

While we’ve all heard of iodine, it’s amazing how little most of us know about it. Yet, without it, there could be severe consequences to the functioning of our body and even death. That is why it’s important to become educated, take ownership of our diets, and improve our own health habits as well as those of our family’s.