More than fifty-percent of Americans are significantly overweight, thanks largely to mass grain consumption, processed foods, refined flours, and sugars. Fortunately, many people are committing themselves to getting healthy, losing weight and reclaiming the lives they deserve. In my book, No Grain No Pain, I talk about “Grainbesity”, the process of excessive weight gain that occurs in people following a grain heavy diet.

The body steals protein from the muscle bank to feed the immune system to combat the inflammatory effects of grain consumption. The body also increases its production of the hormone cortisol to fight this inflammation. The result? Inflammation and pain as muscle shrinks (atrophies) and compresses joints. Many of the drugs used to mask pain or reduce inflammation interfere with long term healing and can over time actually damage the gut, causing more pain and inflammation. Moreover, such drugs deplete the body of vitamin B12 and other vital nutrients essential to healing (watch this video for more on this).

The chronic pain that results leads to exercise avoidance which makes you more likely to gain weight, which makes it harder and more painful to be active… the cycle never ends until the diet changes. 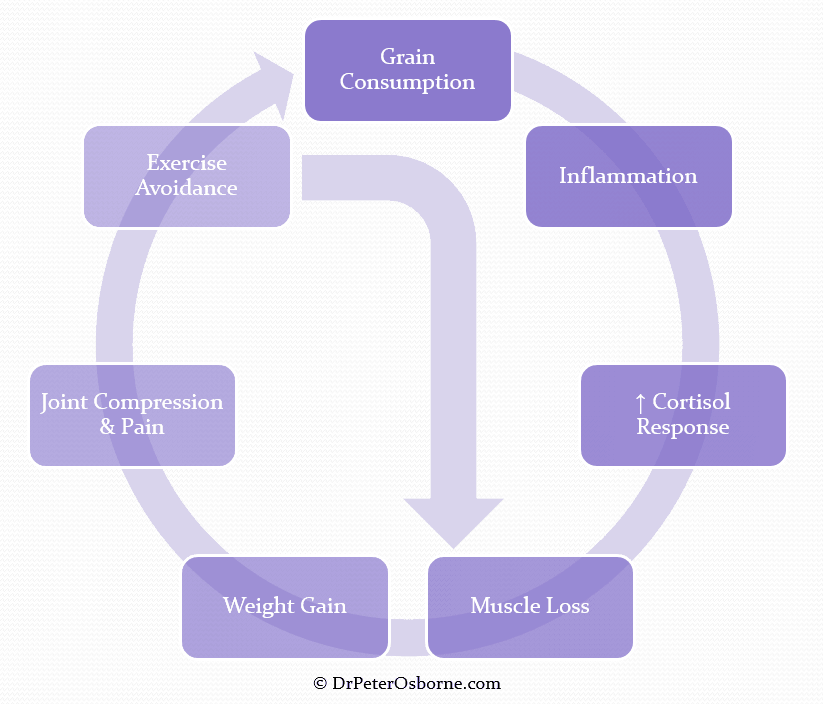 The Value of Fat Burning Foods

Going gluten free for many will lead to fat loss, but I created a list of foods that can help expedite this process in a healthy manor.

What are fat burning foods? They are foods that have been clinically shown to help burn fat in any number of ways. Some of them boost metabolism. Some help prevent carbs from being stored as fat. Others prompt hormonal responses that signal the body to release fat you already have stored. Still others help regulate blood sugar and reduce insulin, which is a fat-storing hormone.
In a quest to lose fat, it’s important to include plenty of fresh, whole foods in the diet and to make fat burning foods a part of your diet as well. But if you’re also sensitive to gluten or have been diagnosed with Celiac disease, it can be difficult to know which gluten free foods are best for helping you to burn fat. We’ve compiled a list of 7 of the best TRUE gluten free fat burning foods to help you make the best choices.
These are in no particular order.

By including these seven gluten free fat burning foods in a diet full of whole, fresh vegetables, fruits and lean proteins, you can burn fat faster and do it without starving yourself or depriving yourself of pleasure. Those two things are key to success on any diet.

In the study, researchers examined the health data of 200,000 adults, noting how often and how vigorously each person exercised, and then comparing this data to the death statistics among the participants.

What they found was that people who followed the current guideline of moderate exercise for 150 minutes per week reduced their risk of early death. But those that spent up to 30% of their exercise time working out at a high intensity (a total of 45 minutes during the week) were 9% less likely to die prematurely than the moderate group. Even more motivating, people who exercised at a high intensity for more than 30% of their workout time (45 minute and up per week) reduced their risk of early death by an additional 13% over those who worked out moderately.

Why is this so exciting? Because HIIT, or high-intensity interval training has already been proven in study after study to be the best way to exercise for fast fat loss.

HIIT – The Best Way to Exercise for Fast Fat Loss

High-intensity interval training is the best way to exercise for fast fat loss for a number of reasons. First, let’s look at the physiological reasons.

HIIT places a far greater demand on your body because of the constant challenge of switching from moderate work to short bursts of very intense work. This boosts your metabolism for up to 48 hours after your workout. HIIT has also been shown in research studies to help regulate insulin release and blood sugar levels, which helps prevent the storage of new fat and prompt the release of fat you already have stored on your abdomen.

Now for some other important reasons why HIIT is the best exercise for fast fat loss.

You can adapt almost any type of cardio to HITT, be it walking, running, swimming, biking or even weight-training, so there’s a way for you to do HIIT no matter which type of cardio you prefer. Contrary to some people’s misconceptions, HIIT is not just for the advanced exerciser. Even people who have been sedentary for years can do HIIT, because “high-intensity” means high-intensity for you, at your current fitness level.

Lastly, but most importantly in some cases, HIIT workouts take up very little time. You can get in a very effective HIIT workout in as few as ten minutes, three times per week. That means that anyone can include HIIT on their schedules, no matter how busy they are. As a bonus, you can do HIIT anywhere, without any equipment at all.

All of this adds up to HIIT being the best exercise for fat loss because it is effective, accessible to anyone and doable for anyone, no matter their fitness level, busy schedule or budget.

How to Incorporate HIIT Into Your Life

Starting a HIIT routine is extremely simple. The protocol is to warm up for at least two minutes, then work out at a moderate pace for two minutes, then at the highest intensity you can perform for 15 seconds. You repeat those last two steps 2-4 times, then cool down.

How many times you repeat the cycle depends on your fitness level and the time you want to spend. What you do depends on your personal choice. You can walk/run, jog/sprint, swim the crawl/swim the butterfly, cycle on flat ground/cycle uphill or in a lower gear and so on.

As you adapt, it is just as easy to ramp up your workout. Simply make the moderate periods shorter and the intense periods longer.

Not only does HIIT lead to fast results in muscle gain and fat loss, you’ll also have the psychological satisfaction of knowing that you’re doing something to improve the quality AND quantity of your life.