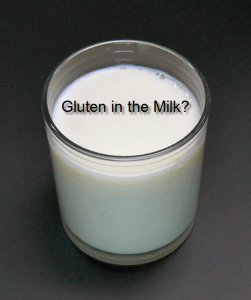 Giving up gluten in the diet can be a challenge for some people. How would you feel if I said that in order to be TRUE gluten free, you have to give up processed dairy foods? Cheese, yogurt, milk, butter, sour cream, etc. What does this look like and are there any alternatives that might make the transition simpler?

Could feeding cattle grain be contributing to this process?

Is gluten found in standard store bought milk? Is gluten the only protein in grain that causes or contributes to poor health in those with gluten sensitivity? Dr. Ford and I answer these questions in this breakthrough interview that you won’t want to miss if you are on a gluten free diet or in the process of beginning your gluten-free journey.

What Can You Do?

Science has confirmed that gluten-based proteins pass through into mother’s milk. There is strong potential that this would be the case in animals as well. Many people consider that dairy is an essential food in the diet for calcium and vitamin D and are hesitant to stop eating it. This is just not true. The milk industry has done a remarkable job of marketing to the general public on this. Much in the same way that the grain industry has everyone believing that they need 8-10 servings per day. Consider the following when forming a decision on this topic:

If you are still consuming dairy and are not seeing the progress that you would like, then try cutting out all pasteurized dairy. Going gluten free by just grains may not be enough to achieve the quality of life you desire.

If you would like to keep dairy in your gluten free diet keep in mind that you should only buy from a grass fed source. Regular grocery stores typically carry products that are derived from cattle that are grain/gluten fed and contain added hormones. Remember that an organic and grass fed dairy means that the cow was fed only organic grains.

Grass fed dairy can be found at a local farmer’s market. Check in your area and find out what you have available for the best GMO dairy products. Make sure to look for the Certified Grass Fed certification when purchasing these products in order to ensure the quality.

Some options for those looking to remove dairy products entirely from their diet are nut milks such as almond, cashew, etc. as well as gluten-free oat milks and coconut milk. These can be used interchangeably in recipes, in your morning coffee, and in your favorite cereals.

Using these resources can help you make more informed decisions about what you  are putting into your body and help you live a more quality gluten-free lifestyle.

45 thoughts on “Is Milk Gluten Free?”