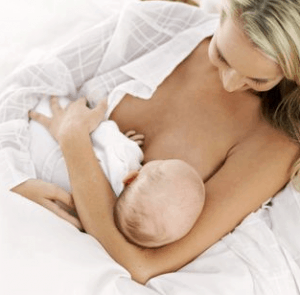 The following study demonstrates that the gluten protein, gliadin, passes into the breast milk of lactating mothers. Breast feeding mothers were given 20 grams of gluten. Their samples were then analyzed for the presence of gluten. Peak levels of gliadin were identified 2-4 hours after ingestion of gluten.

This is yet another study that shows gluten passes into the milk of breast feeding moms. Once again, this brings up major concerns for those following a gluten free diet.

Statistically speaking, 1% of the US population is thought to have celiac disease. More than 90% of them are undiagnosed. Unpublished data estimates that non-celiac gluten sensitivity may be as common as 40% of the US population. Taking these statistics into account, what are the implications of breast feeding now? Are mothers unknowingly damaging their babies? Consider the growing trend of asthma, allergies, colic, autism, ADD, and other gluten related disorders of childhood.

Because of its insidious behavior, many patients with gluten sensitivity don’t develop symptoms until their mid thirties. By that time they have developed severe autoimmune disease or other inflammatory conditions. Is all of this preventable? If so, how?

The answer lies in prevention. HLA-DQ genetic screening for gluten intolerance/sensitivity should be performed at birth. It is non-invasive and the kits are inexpensive. You cannot change your genes, but you can alter your environment to accommodate them.

Is Dairy safe on a Gluten Free diet?