Gluten has been shown to damage nerve tissue in multiple research studies. Dr. Hadjivassilliou and colleagues have published yet another study on the damaging effects of gluten on nerves.

The study links sensory ganglionopathy (damage to nerve bundles that can lead to numbness and tingling of the hands and feet, burning sensations, poor balance, and dizziness) to gluten exposure.

A gluten free diet led to stabilization of the neuropathy for many of the patients in this study.

Gluten is a known neurotoxin. It comes as no surprise that yet another research study links this toxic peptide to nerve damage. It has been speculated that gluten effects the nervous system in many different ways. If you missed this critical interview on gluten and brain damage with psychiatrist, Dr. Chales Parker, go watch it now...

The screen capture below depicts the gluten-nerve connection by displaying a search on the National Library of Medicines Database:

Gluten can contribute to autoimmune antibody production against nerve cells, myelin (the coating around nerves), as well as the receptors on cells that bind neurotransmitters (chemicals that allow nerves to communicate).

Gluten has been shown to contribute to the break down of the blood brain barrier. This allows chemical toxins to leak into the blood supply of the brain itself .

Gluten Sensitivity can cause malabsorption of vitamins, minerals, and other nutrients. The consequences of these deficiencies can lead to neurological disease. For example, vitamin B vitamin deficiency can prevent the body from producing important neurotransmitters like serotonin, dopamine, acetylcholine, and epinephrine.

I commonly hear other doctors say that their is no scientific evidence to make the claims above. My reply is usually “Have you picked up a medical journal lately?” Below are a few more simple searches using the National Library of Medicine Database on gluten and select nervous system diseases: 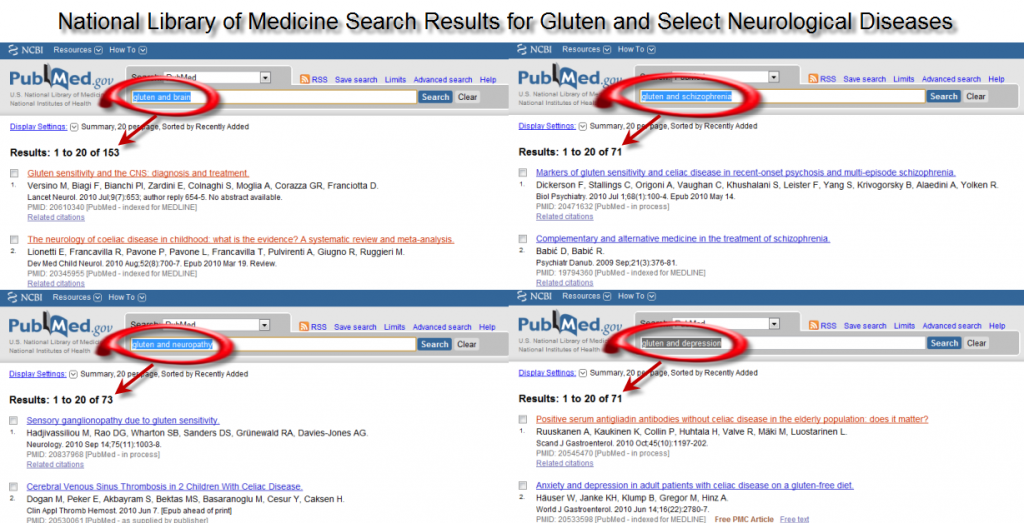 Have you gone gluten free but still remain sick? Find out why now…