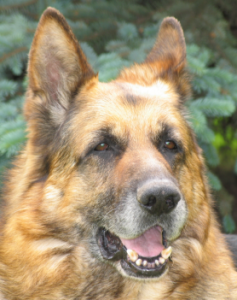 A dog training company has developed a novel approach to help those with gluten sensitivity. They are training dogs to detect hidden gluten in foods for their owners.

The training is done in Slovenia (Europe) and takes several weeks to accomplish.

“Teaching a dog to be alert to the scent of gluten is much more complicated than most scent-detection training, because gluten comes in so many forms. A type of protein commonly found in wheat, rye and barley, gluten is widely used in products other than the obvious — cereals, breads and pizza — after being processed in various ways.

Gluten, in fact, can be used as a filler, binder or thickener, hidden in all manner of food, including, for example, soy sauce, many salad dressings and even some toothpaste.”

Training dogs to detect gluten is a great idea. The question becomes – what gluten are the dogs being trained to smell. There are thousands of different gluten proteins present in grains. Consider this recent study that discovered the existence of 400 new gluten proteins…

Perhaps additional technology will come of this as well. Machines have been created to smell wines. Maybe one can be developed for gluten as well. Any entrepreneurs willing to take on this challenge?