Franken Grains on the Horizon 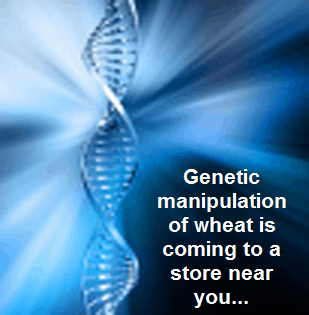 A new study published in the Proceedings of the National Academy of Sciences discusses the potential to genetically modify different varieties of wheat to contain less immune stimulating glutens (prolamins) for patients diagnosed with gluten sensitivity or celiac disease. You can read the abstract of the study below:
Abstract

Wheat supplies about 20% of the total food calories consumed worldwide and is a national staple in many countries. Besides being a key source of plant proteins, it is also a major cause of many diet-induced health issues, especially celiac disease. The only effective treatment for this disease is a total gluten-free diet. The present report describes an effort to develop a natural dietary therapy for this disorder by transcriptional suppression of wheat DEMETER (DME) homeologs using RNA interference. DME encodes a 5-methylcytosine DNA glycosylase responsible for transcriptional derepression of gliadins and low-molecular-weight glutenins (LMWgs) by active demethylation of their promoters in the wheat endosperm. Previous research has demonstrated these proteins to be the major source of immunogenic epitopes. In this research, barley and wheat DME genes were cloned and localized on the syntenous chromosomes. Nucleotide diversity among DME homeologs was studied and used for their virtual transcript profiling. Functional conservation of DME enzyme was confirmed by comparing the motif and domain structure within and across the plant kingdom. Presence and absence of CpG islands in prolamin gene sequences was studied as a hallmark of hypo- and hypermethylation, respectively. Finally the epigenetic influence of DME silencing on accumulation of LMWgs and gliadins was studied using 20 transformants expressing hairpin RNA in their endosperm. These transformants showed up to 85.6% suppression in DME transcript abundance and up to 76.4% reduction in the amount of immunogenic prolamins, demonstrating the possibility of developing wheat varieties compatible for the celiac patients.

You can read the full article here.

It would appear that the basis for the research being done above is to produce a genetically altered variety of wheat that would contain less of the immune damaging glutens found in current wheat varieties. Although this research is still in early stages, it won’t be long until this happens. Production of “gluten free foods” is a billion dollar industry, and the race is on to be the first to create a genetically engineered strain of grain that has all of the flavor with less gluten.

The question remains – Is this dangerous? If we look at other examples of genetic manipulation to grains and the damage now being linked to them, the answer is yes. The problem with genetically modified foods is that they have never been adequately studied to be safe. There are too many unforeseeable consequences, and there is no way to adequately determine safety in humans without performing long term comprehensive research with humans. In my humble opinion, introducing a new species of grain into an already sick population will create many more problems than solutions. Some research links the cross breeding of wheat to the increased gluten toxicity that we currently face. The question that I would ask is simple. If we are in part responsible for creating this problem, will genetic manipulation pose a solution? I don’t see how it could. We know that eating genetically manipulated food in children and animals contributes to:

What do you think? Leave you comments below

2 thoughts on “Franken Grains on the Horizon”