Can Celiac Disease Cause Iodine Deficiency?

Gluten has long been known to cause malabsorption and nutritional deficiencies.  Iodine is no exception to this.  But before tackling the connection, let’s take a deeper look at iodine and the role it plays in maintaining your health.

Iodine deficiency is a global health issue.  Besides malabsorption caused by gluten exposure, dietary iodine inadequacy is common.  The WHO estimates that more than 2 billion people globally do not receive enough dietary iodine.

If you look closely at the table salt you purchase from the store, you will notice that most of the time, the labeling will say it has been “iodized” or fortified with iodine.

That is because in the early 1900s scientists realized a need to fortify the diet with iodine to prevent the harmful symptoms of deficiency. In recent times, many have turned away from fortified table salt due to consumption risks associated with blood pressure.  So, it’s important to know where to obtain adequate dietary iodine, why this nutrient is essential and why the body cannot function without it. Keep reading for answers to all of the following questions.

Iodine is a trace element that is naturally present in some foods. The earth’s soils contain varying amounts of iodine, which in turn affects the iodine content of crops.

Iodine in food and iodized salt is present in several different forms including sodium and potassium salts, inorganic iodine (I2), iodate, and iodide, the reduced form of iodine. Iodine rarely occurs as the element, but rather as a salt. For this reason, it is referred to as iodide and not iodine. Iodide is quickly and almost completely absorbed in the stomach and duodenum. Iodate is reduced in the gastrointestinal tract and absorbed as iodide.

Iodine is critical to thyroid health. It is necessary to produce T3 and T4 which are thyroid hormones. These not only regulate growth, but they are vital for metabolism, generating energy, and communicating with DNA about how cells are supposed to grow, heal, and repair. T3 is an active thyroid hormone with three molecules of iodine, while T4 is inactive and contains four molecules.

Once TSH (thyroid-stimulating hormone) is produced by the brain, it travels to the thyroid telling it to produce T4 and to trap more of this nutrient in the diet in order to produce T3. T3 then communicates to DNA to upregulate the metabolism. This process also requires selenium, tyrosine (an amino acid), and vitamins B2 and C. Without all of these nutrients, and without iodine, this process will not work correctly – and neither will the thyroid.

Iodine deficiency is one of the most preventable problems in the world, as it is cheap and easy to fortify salt, a commonly used seasoning. However, when tested, most levels in salt still aren’t sufficient. Therefore, it’s best to not rely on salt as a primary source of iodine, and to also be sure to include iodine-rich foods (shared below) in the diet. Furthermore, certain health conditions can impair absorption of iodine in the body.

Becoming deficient in iodine can cause many issues, including:

Because many of these are the same symptoms associated with thyroid problems, doctors will often prescribe medication to ease these symptoms without truly getting to the root of the problem. It is best to request testing for an iodine deficiency prior to accepting medication and receiving a potentially incorrect treatment.

You might wonder how iodine relates to celiac disease and gluten sensitivity. There is actually an interesting association, as both celiac disease and iodine deficiency are triggers for thyroid disease. In fact, one study found elevated thyroid antibodies in children with celiac disease. Another study found that the presence of tTg IgA antibodies as found in those with celiac disease could contribute to the development of thyroid disease. Furthermore, as we discussed previously, iodine is absorbed in the small intestine, and so those with celiac can have impaired absorption, as the small intestinal villi are compromised. Therefore, celiac disease can trigger thyroid disorders by causing iodine and other nutritional deficiencies.  One study found that iodine absorption in celiac children is impaired compared to the general population. This same study found that iodine absorption increases when following a gluten free diet. Iodine deficiency can also be exacerbated by deficiencies of iron, vitamin A, and selenium.  These three nutrient deficiencies can also be caused by gluten induced intestinal damage and inflammation.     If you have celiac or non celiac gluten sensitivity, it is vital to ask your doctor to monitor you for nutritional deficiencies to include iodine.

As mentioned, while iodine can be obtained from iodized salt, it’s not the best source when looking for adequate, consistent amounts. Instead, there are many great sources in food found in most kitchens. These include milk (preferably organic A2 milk like that from Alexandre Eco Dairy, pasture-raised eggs, and wild-caught seafood, especially cod, oysters, and shrimp. While not as commonly consumed, one of the richest known sources of iodine is seaweed. Dried seaweed sheets are readily available and make for a good crunchy snack. Additionally, well water, if the well is dug deep enough, can be a great source of iodine. 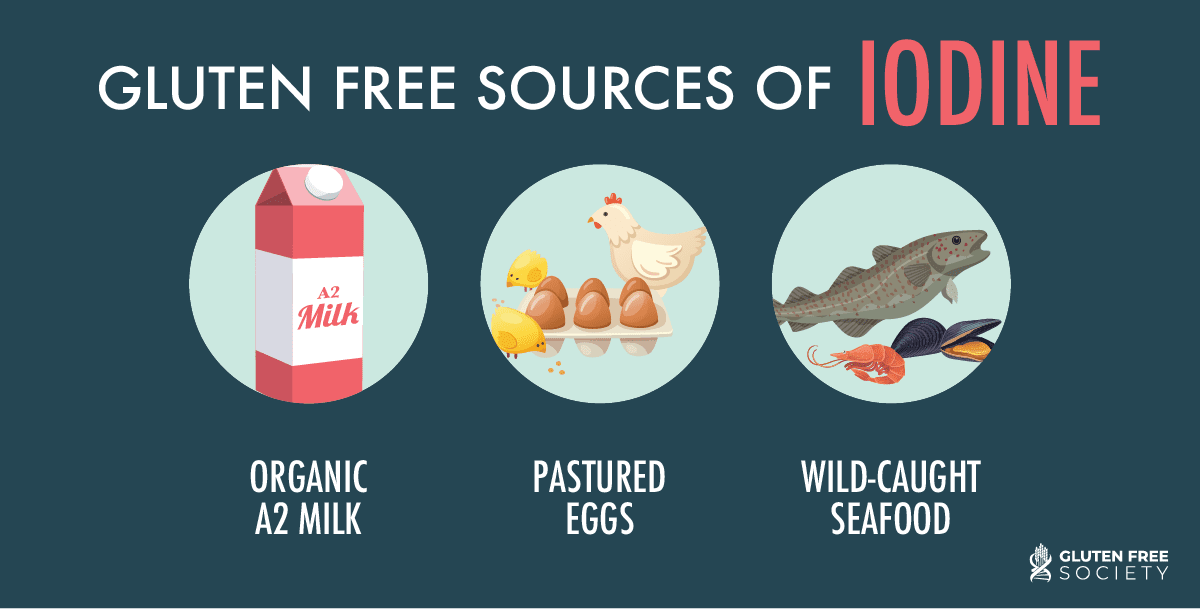