The Rise of Autoimmune Disease 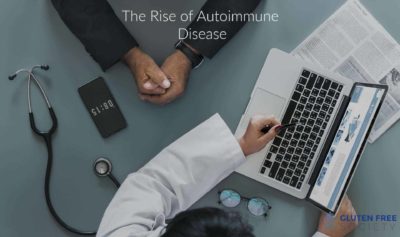 Since the 1950s, autoimmune diseases have been on a steady increase, prompting many to question why this has become such an issue in recent times. While many physicians claim to not know a cause or a cure, there are certain triggers that can initiate and worsen these diseases.

Surprisingly, the number one factor causing autoimmune disease, or AID, is gluten. So why the sudden increase in the autoimmune disease when grain-based foods been around much longer than the 1950s? Well, that is related to the way the diets have changed over time.

Today, there is 7-10 times more gluten in the staple diet, with 70% of the diet coming from grain-based foods. In fact, the food pyramid even encourages it, with the primary source of calories coming from carbohydrates. It’s important to remember, however, that the food pyramid was established by politicians and lawyers, rather than functional medical doctors.

It is also important to remember that while an individual may not be diagnosed with Celiac disease, he or she could still have a sensitivity. If suspected, testing can be performed for an official diagnosis. While sensitivity may seem insignificant, gluten has been linked to 80-100 forms of AID, such as inflammatory bowel disease, ulcerative colitis, Crohn’s, and mucilaginous colitis, just to name a few.

While it has been established that gluten can be detrimental to one’s health, it’s important to understand just how far-reaching this ingredient is into causing issues within the body. In many cases, it contributes to:

While gluten may not always be the cause of these, if an individual is experiencing one or more of these issues, it is certainly worth eliminating in the diet to see if symptoms improve.

There are several other factors that may trigger an autoimmune disease, as well. A significant one is exposure to chemicals. These may include chemicals found in food preservatives, food additives, as well as, those polluting the air and water. Overall, most individuals are exposed to over 30,000 chemicals a day!

While controversial, another area of exposure has been in vaccines. Since the 1950s these have risen in popularity, and certainly have their benefits; however, many contain egg, aluminum, and mercury. These can contribute to neurological autoimmune diseases, in particular, an AID like Lupus.

Other factors that may lead to an autoimmune disease within an individual include:

Medications have also been linked to autoimmune diseases. These may include some blood pressure medications and aromatase inhibitors which are given post-cancer patients. Additionally, medications prescribed to treat AID, like steroids, have actually been known to cause Lupus, as well.

So if many doctors claim to not know what causes AID, how exactly are they treating these conditions? The go-to treatment seems to be medication, specifically steroids, and biologics. The problem, however, is that some steroids lead to further autoimmune disorders and biologics have been known to have harsh side effects and even cause cancer.

After being on medication for a significant amount of time, the body will start to deteriorate and health will decline. Joints may need replaced meaning that surgery will be required and because health is so poor, recovery will take longer than normal. By ignoring the triggers and simply choosing medication, one is simply masking the problem, causing further harm to the body.

So what are the next steps if an individual has an autoimmune disease, but wants to avoid medication? First, get tested – this could be genetic testing, testing for gluten sensitivity, or even getting tested for a chemical microbial imbalance. Next, go step by step to discover what exactly is triggering your AID.

This may look like cutting out gluten along with other foods like dairy or sugar, or it may mean taking care of a yeast overgrowth or parasitic infection. Regardless, getting to the source of the problem is vital. It’s also important to remember that every person is different; therefore, what caused an AID in one individual may not be the cause in another.

After taking care of the autoimmune disease triggers, it’s important to develop habits for the health of the body and mind. While medicine can mitigate a problem, it often doesn’t cure it. The body must do that on its own.

To assist the body in caring for itself, establish these healthy habits:

Establishing these habits now will not only help one avoid disease but will help equip the body if and when one does come.

3 thoughts on “The Rise of Autoimmune Disease”