Olmesartan is a prescription medication used to treat high blood pressure. A new study finds that the side effects of this drug can induce symptoms that mimic celiac disease…

A research study published in Mayo Clinic Proceedings this week disclosed a very alarming discovery. Researchers have found an association between the prescription drug olmesartan and severe gastrointestinal (GI) issues such as nausea, vomiting, diarrhoea, weight loss, and electrolyte abnormalities.

From 2008 to 2011, physicians from the Mayo Clinic, Rochester, Minnesota, treated 22 patients with symptoms similar to celiac disease, including intestinal inflammation and abnormalities. Patients came from 17 states, and some had been diagnosed with celiac disease. They had chronic diarrhoea and weight loss (median weight loss was 17.70 kg [39 lbs] and 1 patient lost 56.71 kg [125 lbs]).

Fourteen of the 22 patients were hospitalised because of the severity of their symptoms. When given a blood test, however, these patients didn’t come back with results typical of celiac disease. They also didn’t respond to treatments such as gluten-free diets.

“We thought these cases were celiac disease initially because their biopsies showed features very like celiac disease, such as inflammation,” said Dr. Murray. “What made them different was they didn’t have the antibodies in their blood that are typical for celiac disease.”

“It’s really an awareness issue,” he said. “We want doctors to be aware of this issue, so if they see a patient who is having this type of syndrome, they can think about medications as a possible association. “What needs to be known next is the science to understand why there is such an association.”

Gluten sensitivity diagnosis is on the rise. Studies show that as many as 92% of those going gluten free fail to have normalization of the villi and reduction of intestinal inflammation during doctor follow up visits. Now we are learning that one of the top prescribed drugs in the United States has side effects that can create symptoms of clinical celiac disease. This is a profound finding and begs many more questions to be asked:

There are a number of medications commonly prescribed that have detrimental side effects. Many of these effects cause gastric and intestinal problems. These symptoms can contribute to a host of different problems. The diagram below illustrates some of the more common negative impacts that are often times ignored or go unrecognized. 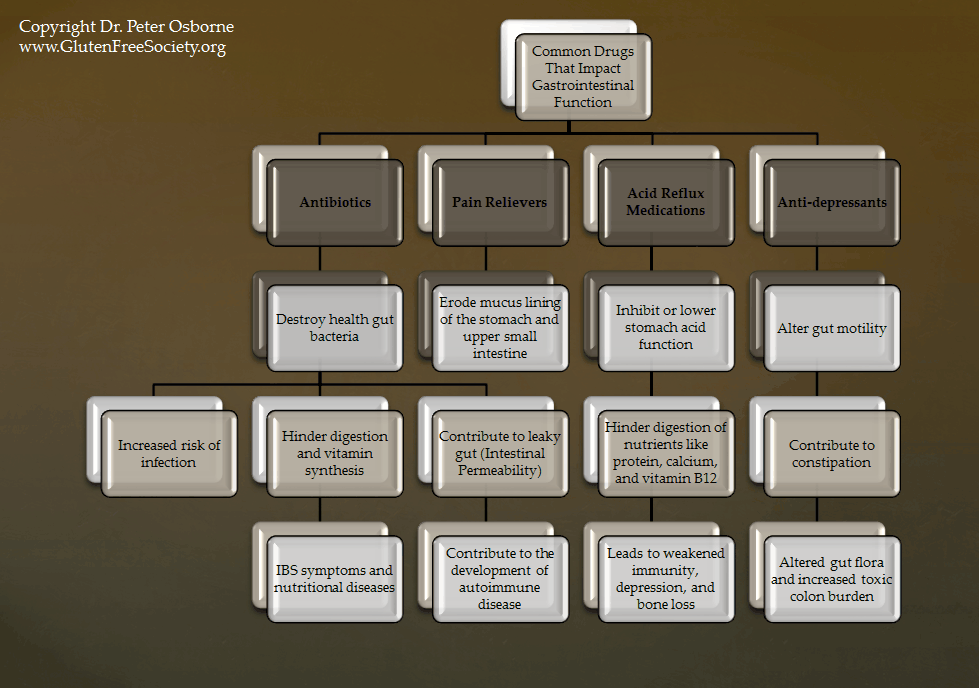 The Solution For Disease (Especially Intestinal) is Not Found in Medication

All too often doctors fail to investigate the origin of disease and instead prescribe a medication that only serves to mask the outward symptoms. This approach can never fully solve the problem that the patient is presenting with, and typically only creates new problems to go along with the original one. Remember that when it comes to the gastrointestinal tract, we must look at food first and foremost. We bathe our intestines three times a day or more in food. The wrong foods can have the wrong effects and lead to many diseases. Celiac disease is a case in point. Bottom line – don’t let your doctor tell you differently. If he/she does, then you know that it is time to move on.