Foods That Cause Heartburn

More and more research continues to mount regarding the effects of food on gastrointestinal disease. Most recently a paper was published in the American Journal of Gastroenterology discussing the importance of food intolerance and sensitivities and their relationship to the development of acid reflux and irritable bowel syndrome. In essence the study confirms that foods cause heartburn. The quote below is taken directly from the paper…

Food intolerances or sensitivities are reactions to foods, which are not due to immunological mechanisms. Lactose intolerance is common in the general population and can mimic symptoms of FGID (functional gastrointestinal disorders) or coexist with FGID. As discussed in other articles in this series, other carbohydrate intolerances may be responsible for symptom generation in patients with IBS and perhaps other FGIDs. There is a great interest in the role of a major dietary protein, gluten, in the production of symptoms that are very similar to those of patients with celiac disease without the enteropathy that characterizes celiac disease. Emerging research into a syndrome known as nonceliac gluten sensitivity suggests a heterogeneous condition with some features of celiac disease but often categorized as FGIDs, including IBS.

The reason this paper is important is that it highlights a major difference between food allergies, intolerance, and sensitivities. Most GI doctors will only measure for IgG allergic response to gluten. The problem with that approach is that it only rules out 1 of 7 types of allergic reactions you could be having against a food. The other problem is that it does not address the issue of intolerance or sensitivity. Sadly, doctors who don’t test for the differences often times tell their patients to continue eating gluten even though they shouldn’t. This can lead to confusion and missed diagnosis. For more on lab testing read and watch this video from leading expert, Dr. Russell Jaffe.

Case in point, I recently had a patient come to see me because her GI doctor told her to stop eating gluten free and she started feeling horrible. He tested her gluten IgG levels. They were negative, and he proceeded to tell her that a gluten free diet was dangerous to follow unless you have celiac disease. This doctor was obviously in the wrong. How many thousands of GI doctors get it wrong every day…and how many thousands of patients are given the wrong information and continue to maintain a very preventable gluten related illness over it? 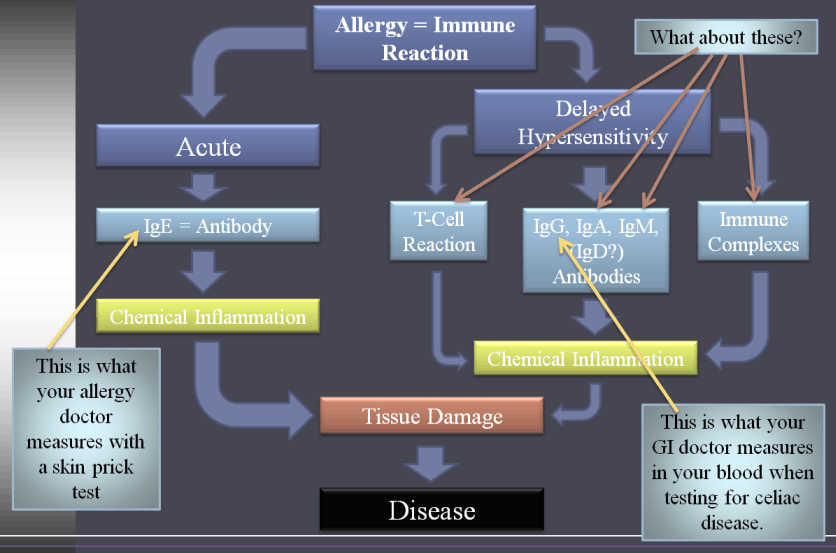 The patient above was put on an acid blocking medication and told to eat more whole grain fiber. The reason she came to see me is because this advice made her even more sick. Aside from the whole grain being full of gluten that she was reacting to, the medication induced a digestive problem as well. It created multiple vitamin and mineral deficiencies that led to anemia and severe fatigue.

Irritable bowel syndrome (IBS) and gastroesophageal reflux syndrome (GERD – AKA heartburn) are two conditions that I have seen completely correct countless times for people who change their diet. Gluten free, dairy free, sugar free, and soy free diets can be extremely helpful to help alleviate hearburn. I also see a strong trend for these conditions being caused by the consumption of genetically modified foods. If you are suffering from IBS or GERD and you have tested negative for gluten allergy or celiac disease, you might just want to consider genetic testing for gluten. You might also consider removing the following foods that cause heartburn from your diet:

Foods That Cause Heartburn

6 thoughts on “Foods That Cause Hearburn”