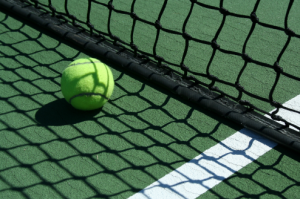 Recently, gluten sensitivity has been a hot topic in the tennis world.

Serbian tennis star Novak Djokovic gives credit to the gluten free diet as playing a major role in his winning streak. He was tested for the problem by his nutritionist in 2010. Since making the diet change, he has taken his game to a whole new level.

“I have lost some weight but it’s only helped me because my movement is much sharper now and I feel great physically,” said an energized Djokovic.

To add icing to the proverbial gluten free cake, Novak defeated Rafael Nadal for the championship at Wimbledon. He has 47 wins and 1 loss since his gluten free diet change.

Meanwhile, Sabine Lisicki recently attributed her collapse on the threshold of a major upset over third seed Vera Zvonareva in the second round of the French Open to a need for her body to adjust to her new gluten-free diet; which Lisicki implemented after being diagnosed with gluten sensitivity.

Lisicki was carried from the court on a stretcher. The 21-year-old later explained that her collapse occurred because her body simply let her down.

She said that “doctors recently discovered that I am intolerant to gluten…My body needs to adjust to the big change and needs some time. It is good that we found out and it will only make life better in the long run, she added.”

There is no doubt at all that going gluten free can enhance athletic performance. The story above is just one example of the benefits of a gluten free diet.

For many athletes, carb loading is a ritual before a big event. Pasta, bread, rice and other high energy (poor nutrient dense) foods are taken is massive quantities in an effort to enhance athletic performance and endurance. If one is accustomed to high amounts of carbohydrates for energy, removing gluten from the diet can cause an initial low energy state. This rebound period can initially cause fatigue and reduce an athletes ability to perform (as was the case for Sabine Lisicki).

In my experience training with superior gluten sensitive athletes, it typically takes about a month of being on the diet to adapt to the change. Once the adaptation period is over, performance is usually greatly enhanced. Athletes report better stamina, improved breathing, less muscle spasms and cramping, faster recovery after workouts, and greater strength.

I perform my exercise at Crossfit. This intense exercise is very effective for weight loss and muscle growth without the injuries associated with traditional weight lifting and long bouts of cardio. Many of my fellow athletes have been diagnosed with gluten intolerance and gone on gluten free diets over the last year. I have personally been witness to some extremely impressive and profound athletic gains in these individuals.

One thought on “Tennis Success Fueled By the Gluten Free Lifestyle”